How do you improve something that has been so successful to become the paragon of an entire price bracket? That’s a very difficult question and one that probably has no right answer. The Italian word for “encore” is bis: directly lifted from Latin, it means “two [times]” and you even use it when you want a second portion of something. BLON decided to have a bis then, as the BLON BL-05 represent an iteration of the highly-successful BL-03 which solve some issues regarding comfort, but make little changes to the tuning.

Disclaimer: I received this unit from Linsoul for free. I have no affiliation with them nor with BLON. Linsoul purchased advertising space on Soundphile Review. The BL-05 retails for $43 at the moment of writing this review. 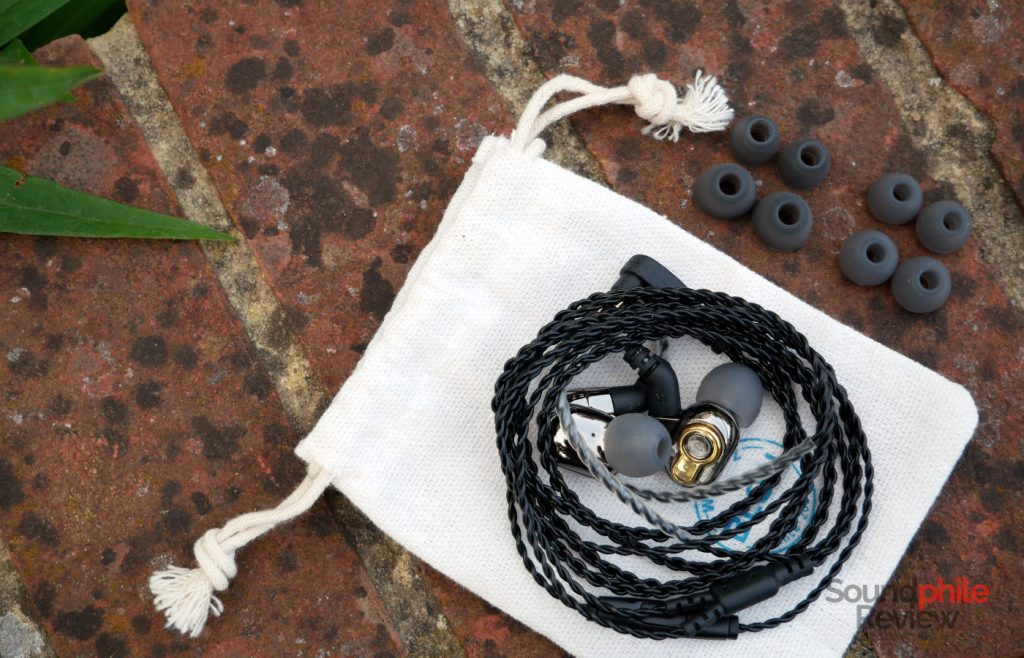 BLON did not change the absolutely ridiculous packaging despite it being so laughable. They kept the “belief letmusicburn oppoty nevergiveup” and “annotation music and driams” on the front of the box, which is… well, funny, if anything?

The box contains the earphones, the cable, a fabric bag and five pairs of silicone eartips in different sizes. 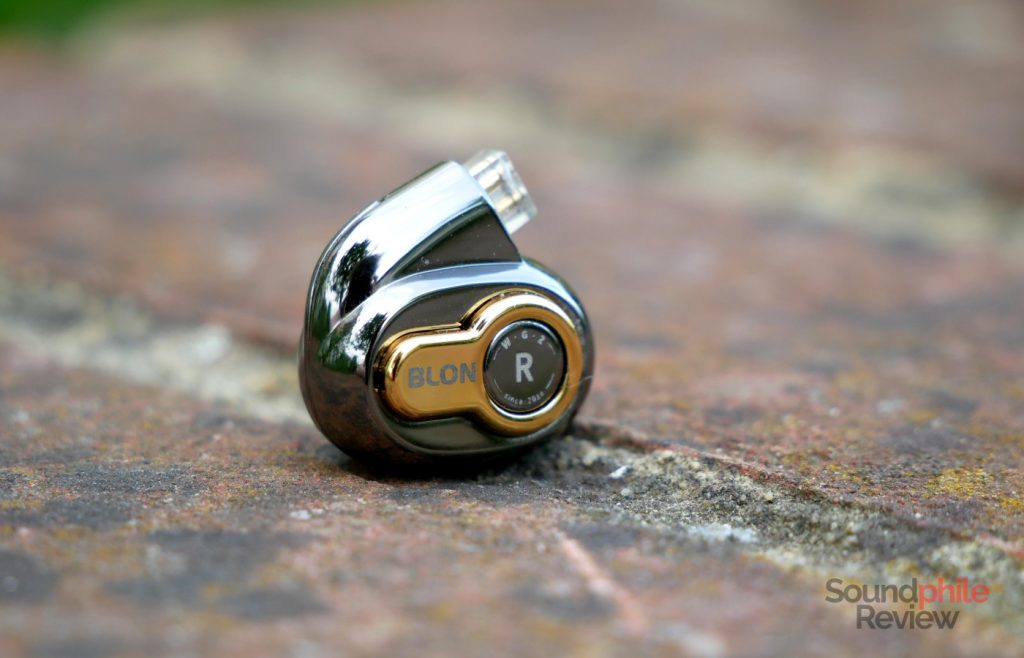 Even though BLON didn’t change the box, they thankfully changed the design of the shells. They’re now more similar to other earphones such as the RHA T20i or the RevoNext QT5 and this grants them a better fit. The shell is entirely made of metal, presumably aluminium, coloured in gunmetal with a golden insert on the faceplate with the “BLON” text on it. It’s a simple design, with the golden accent that looks a bit tacky to me, but it’s enjoyable and not too flashy nonetheless. 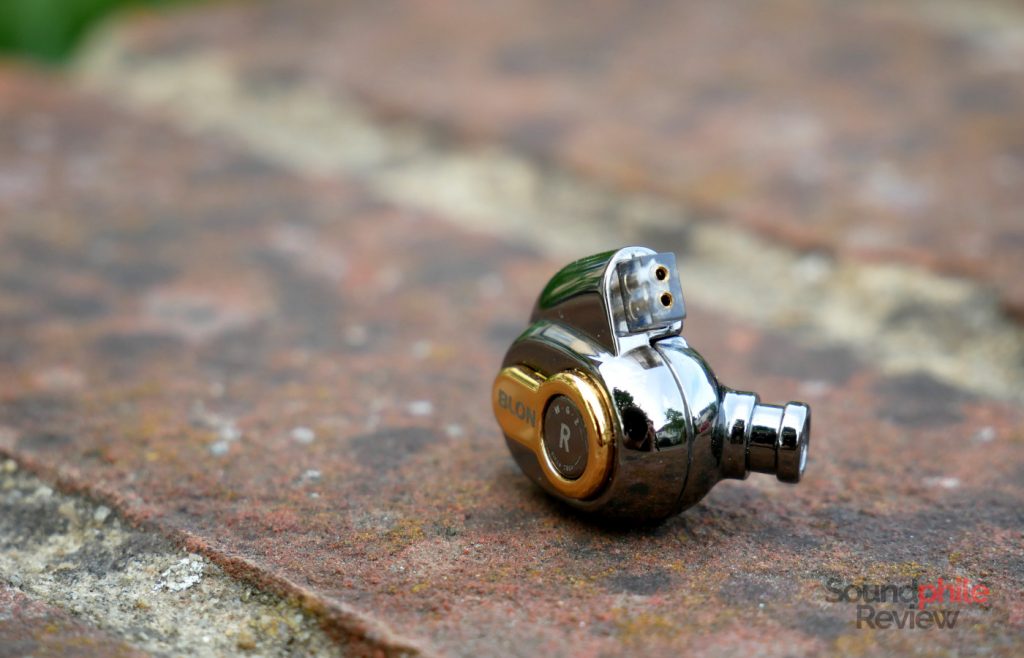 One of the main complaints about the BLON BL-03 was that it was difficult getting the right fit and therefore the right isolation and the right comfort. Thankfully the new design fixes these issues as it is more “traditional” – that is, more probable to fit correctly in many people’s ears. The shells are almost pill-shaped, with rounded edges that favour comfort. In fact I can wear them all day long and still find them comfortable at the end of the day. They’re relatively small and light and this helps greatly. The only thing that causes issues to me is the cable, which is the same as it was on the BL-03. It’s the plastic hooks that are too curly and end up pressing on my ears, causing a bit of fatigue; it’s small, but it’s there.

Isolation is quite good, as I can listen to music at low volume without hearing my girlfriend’s sewing machine at ~2 m distance too much – quite an achievement, given how noisy it is. I can’t test the earphones on the subway due to the ongoing pandemic, but I am quite sure there would be no issues with that. 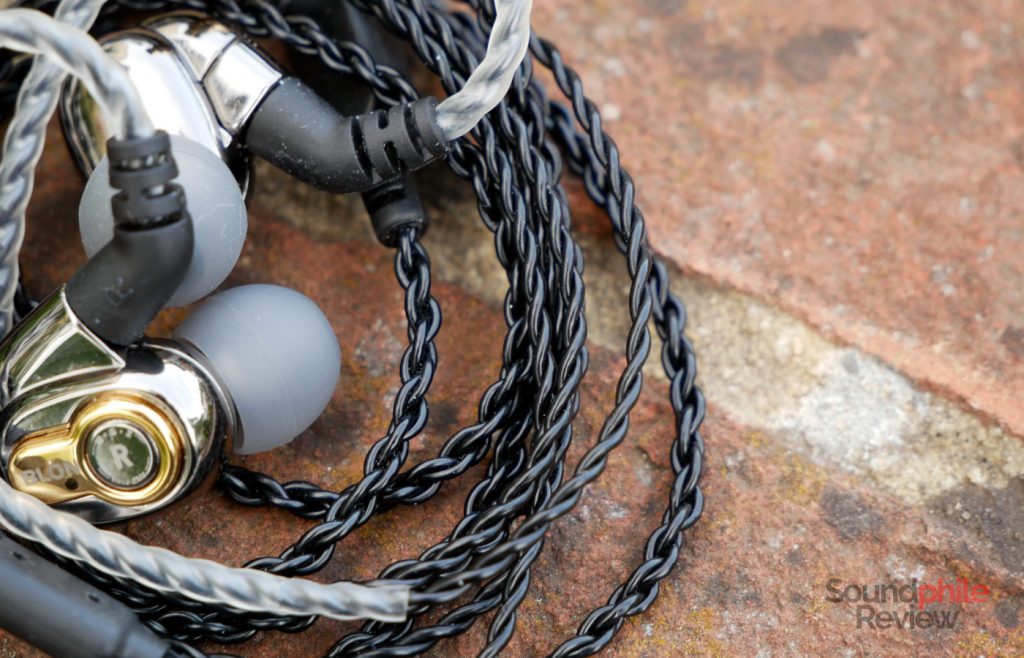 The cable is the same as that included with the BL-03, but in my case it also has a microphone on it so it can be used with phones, computers, etc. It’s quite soft, but it’s also plasticky and does not really feel like it’s good quality (despite there being no proof of it being bad: it’s just a feeling thing).

I tested the BLON BL-05 using the following gear: Burson Audio Playmate, iFi ZEN DAC, Shanling M2X. In all cases the source files were the same and mostly FLACs in 16 bit / 44.1 kHz.

The BLON BL-05 feature the second generation of the carbon nanotube diaphragm that BLON developed. It’s a 10 mm dynamic driver which is quite different from other drivers as, according to the company, it “uses thermoacoustics to create soundwaves generated by incoming currents through the carbon nanotube”.

Soundstage is quite spacious for a closed-back IEM: the instruments mostly appear quite close, but with a sensation of the space around them (and around the listener) being quite large. There’s good width and a hint of depth which make the space interestingly large. Imaging is definitely good, with a careful positioning of instruments in terms of both left/centre/right and in terms of giving each one their own location (though the latter feature is not as developed as the former). Instrument separation is undoubtedly quite good.

Bass offers good depth and satisfying speed. While the BL-05 do not get to the lowest notes with large volume, they do get there and this offers a solid foundation for the rest of the sound – there’s a good oomph. The main bump is in the mid-bass area, but it’s not overwhelming compared to the sub-bass and this leads to a relatively balanced presentation. Speed is also quite good for earphones in the sub-$50 price range, but you can hear that the transients are not clear-cut nor especially physical. You can hear that this is bass produced by a dynamic driver – not in a bad way, though. Due to this detail is decent, but still not overly abundant nor especially clean. Overall bass is pleasant, if a bit emphasised.

Midrange is where things start to become a bit weird. The tonality is a bit off, with a bump at the intersection between the middle and upper regions that gives a boost to instruments such as guitars, electric guitars, harps and flutes. This emphasis is minor, but it is noticeable nonetheless and it affects some tracks. One example can be Snarky Puppy’s Xavi, which is rich in flutes and electric guitars. They appear more emphasised than they should and with a tonality that’s almost shifted up. The following track in the album, While we’re young, has the same issues with the brass instruments. Let me be clear on this: I’m nitpicking. The midrange is quite great honestly and these are minor flaws overall for earphones in this price range, but they need mentioning. The balance is overall quite good. Detail is also sufficient, as I could hear in While we’re young: there are some drum sticks playing in the background and they’re still perfectly audible in the mix. Speed is also more than decent, even though there’s close to no physicality and drums are a tad slower than I would prefer. But, again, I am nitpicking given the price.

Treble has a good sparkle, but due to its limited extension it doesn’t feel overly airy or spacious. It offers barely adequate detail this doesn’t make instruments feel “deeper” and with a more nuanced presence in the mix. Crashes are not quite like the real thing as they’re a bit splashy. If you are looking for a great level of detail, the BLON BL-05 do not offer that and they do not ever get close to micro-detail territory. This is the Achille’s heel of these earphones as it misses the mark by quite a bit.

Due to the current limitations in travel I do not have my full arsenal of headphones available as it’s in another country. So let’s compare the BL-05 to what i have available:

The BLON BL-05 offer a very good listening experience in their price range, one that is comfortable and rich. The tuning is almost right (emphasis on “almost”): the BL-05 are what many people are after thanks to their skilful combination of technicalities and easy tuning, but on the other hand they may be too focused on the upper midrange and lower treble for many others. For the price they have little competition I can think of, if we exclude the previous-generation BL-03, and compared to those they’re more of an alternative than an upgrade.

In the grand scheme of things, though, the BL-05 are far from unrivalled. You can definitely tell there are better earphones out there when you focus on tuning (there are more accurate-sounding IEMs) or on technical ability (decay, transient speed, imaging, soundstage are all areas where I could name better IEMs: Moondrop A8, Fearless Audio S10 Genie, Fearless Audio S8 Pro…). Yes, they’re very good, but they’re not “flagship killers” or anything like that. Still, I think these could well be the only earphones for many people. Especially if you are getting into the hobby, the BLON BL-05 can be a solid starting point or a pleasant addition to any collection. Just don’t expect miracles, because they definitely are not capable of those.

Why you will see ads on Soundphile Review