Sitting atop the manufacturer’s line-up, the Moondrop A8 are incredibly capable earphones in a very nice package. With a lightly coloured signature and superb technical ability, they offer everything one could look for – even though they come with a somewhat hefty price tag. They are worth their price though, and probably some more.

Disclaimer: I received this unit free of charge from Linsoul. The Moondrop A8 retails for $666. You can buy it here.

The Moondrop A8 packaging is not super fancy, but it’s certainly unique. As you can see in the related Headphones in Pictures article, there’s quite a lot to it, though it’s not perfect. The leather case is in fact a bit too small, and a bit too rigid, though it does a fine job at protecting the earphones and keeping them tidy when not in use. Simplicity is the ultimate sophistication, according to Leonardo da Vinci, and that holds true four hundred years after him. The Moondrop A8 is in fact one of the simplest earphones in terms of design: it’s just a completely transparent shell which displays the innards. No fancy designs, no odd shapes, no vibrant colours. Just transparent resin. And yet, it’s undoubtedly beautiful. Seeing all the components inside the shell is fascinating, not only because one can actually see all the parts and see how the earphones are made, but also because it is not a common sight. It seems like there are three versions of the faceplate: one is the one I received, with the “Moondrop A8” text on it; the other has the Moondrop logo with Chinese ideograms; the third is completely clear, without anything on it. The faceplate seems to be glued to the rest of the shell, or at the very least to be attached to it instead of being part of it. As a result, there’s a discontinuity that acts as a magnifying lens: the inside of the earphone is magnified and it’s easier to read the print on the balanced armatures (see the first picture in this paragraph!). 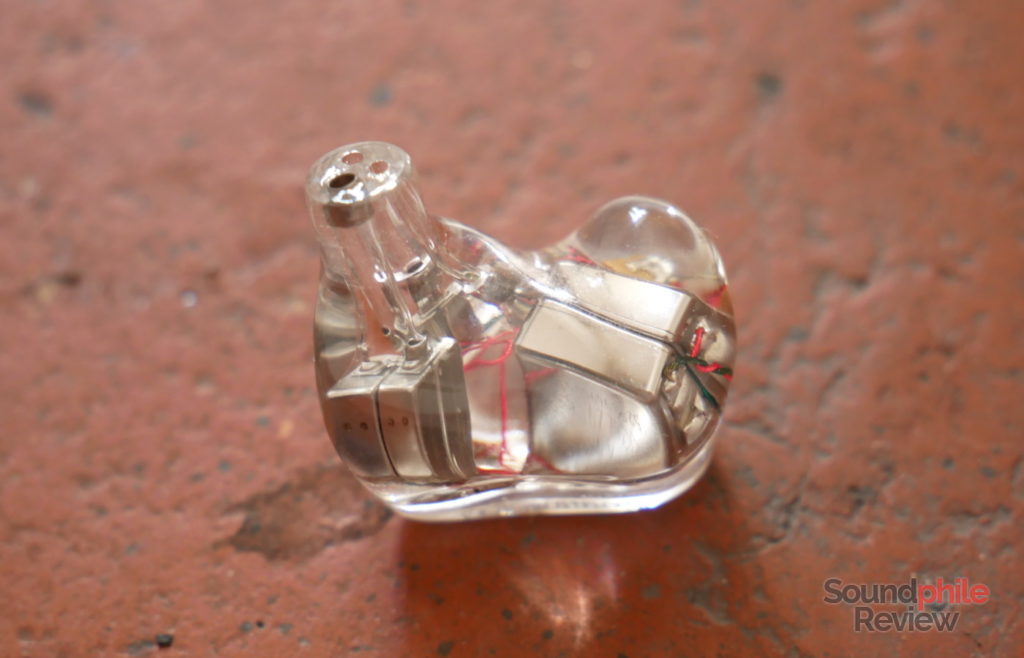 Even though they’ clearly made of two different pieces, there’s no seam to be found anywhere and this speaks a lot about how well these earphones are assembled. They appear so well-built they’re probably going to outlast me. If we really want to find an issue, the 2-pin socket is a bit tight and it’s difficult to insert the cables. Little else can be said about the build quality, as they’re practically flawless.

I found comfort to be above average: I can wear them for more than four hours and still don’t feel them in my ears. They’re incredibly good, though I had to use foam eartips to get it right. In fact stock eartips act as suction cups on my ear canals, so I ended up not using them. When I wear the Moondrop A8 using their stock tips I always end up feeling something is not right and having a sensation of slight pain in my ears. That’s why I switched to using foam eartips. Finding a pair that would fit was an odyssey in its own, as the large nozzles make it difficult to use common eartips (unless you’re ready to force them on) and require extra-large ones. The plastic boring of the ones you can see in the featured image at the top was almost destroyed in the process of fitting them on, so know what to expect! 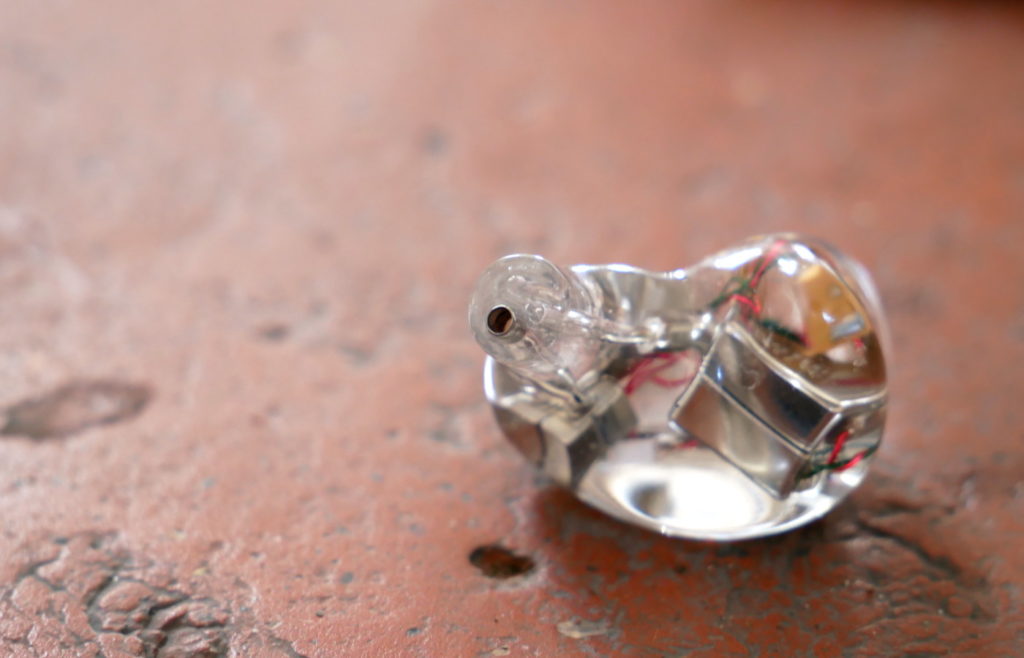 Isolation is very good and shields the listener from most sounds coming from outside. It’s not a perfect removal of all sounds, but it’s good to the point only the loudest sounds manage to get through, and they do so greatly reduced in volume. 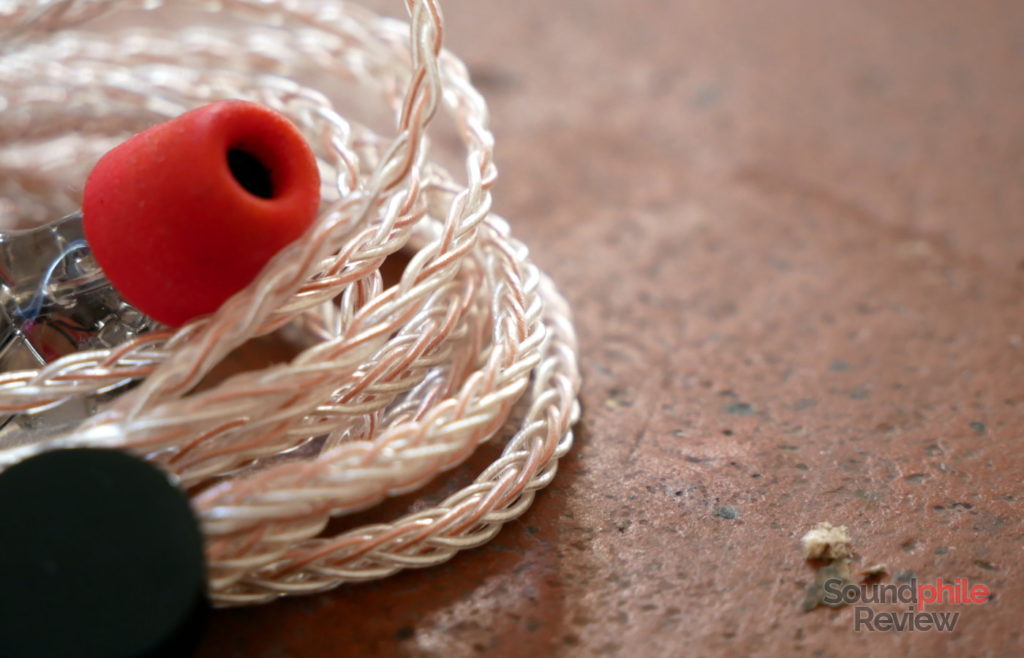 Every chain has a weak link and here it’s the cable. It is made by Lyre Acoustics and it uses eight cores: four of them are copper, the other four are silver-plated copper. The jack housing is made of metal and has a band of carbon fibre-like material, while the Y-split is a circle made of metal and the 2-pin connectors are made of semi-transparent plastic. I wrote that the cable is the weak link in the chain: that’s because the cores are thin and covered in a generous plastic sleeving. Considering a cable like this costs around $40, one would expect a better one when buying a $650 IEM. It’s not a bad cable by any means, it’s just sufficient.

I used a few different sources when trying the Moondrop A8, but the main ones were the Topping DX7 and the Burson Audio Playmate while at the desk and the Shanling M2X while on the move. I often used an iFi IEMatch. Source files were mostly standard-resolution FLACs (16 bits, 44.1 kHz).

What I find especially compelling about the Moondrop A8 is the fact that they present the listener with superb clarity. It makes you feel in the music, as it has enough smaller details and nuances, and each instrument is separated from the others enough, to feel like instruments are in fact “three dimensional”. By that I mean that each instrument sounds as if it had its own space, as if it had a physical presence in the stage.

Soundstage is decently wide, though it doesn’t extend too far neither in width nor in depth. It’s mid-sized, but it is large enough to let music have some space to be and develop in. It never feels cramped nor flat. Imaging is solid, with each instrument being placed in its own spot, which is clearly defined. Instrument separation is superb and it’s among the main reasons for the aforementioned clarity.

Despite using balanced armatures, bass on the Moondrop A8 has some physicality, meaning that you can feel it just as you can feel the beating on drums in reality. It’s not as physical as bass on the Westone W80, which is so physical it seems to come from dynamic drivers, but it offers a very good sensation. Bass is fast and this touch of physicality makes it appear realistic enough. In terms of tone, it is really good: it does not get too deep, but it is definitely there and it is a solid foundation upon which the rest of the sound is built upon. I would say that it is just right, as it is neither too much nor too little. It’s definitely not a bass section for those who want thumping bass, but it’s more than pleasant. Control is exceptional and bass is always exactly where it should be, without ever becoming too aggressive or losing control and leaking over mids. That’s expected from balanced armatures, but it’s not a given. The level of detail is really high: you can hear the smaller details even in congested tracks where there’s a lot going on.

Midrange is hard to describe in terms of tonality as it does not seem to have any colouration, yet it’s more engaging and lively than other neutral earphones I’ve heard in the past. It’s definitely not flat in the sense of boring or dull. It approaches neutrality though it might have tiny bumps at both ends. I think that what gives it its liveliness is its speed: it’s in fact really fast and enjoyable. It’s almost enthralling in how it presents sound in a fast and vivid way. Drums in Snarky Puppy’s Xavi are fast and engaging, while flutes are harmonious and lack any sibilance and trumpets are vibrant and vivid, all while the piano sounds natural and the electric guitars are biting but never aggressive. The mix is perfectly clear, with instruments sounding as they should. Detail is nothing short of exceptional.

In terms of quantity, treble is just south of neutrality in the overall balance. It’s a tiny bit less than it should, but it’s not laid back by any means. It has enough weight in the mix to be easily audible and to be able to convey enough detail to the listener. It seems to me like it’s well balanced, so I can’t point out a single area which stands out from the others. Speaking of the detail, that’s probably the best quality of the treble area: it is thoroughly detailed, so much so that you can hear many of the smallest details. It impressed me that I could hear the fingers moving on the strings in a song by Abbath: it’s black metal, so noisy and chaotic and not really the best in terms of production, but the A8 were still able to pick up that small, faint detail in the mix and display it clearly. That’s just an example of how even with relatively low-quality music the A8 can bring out the best of it.

It’s time to compare the A8 to other IEMs! I chose earphones that were similar either in terms of drivers or price:

The Moondrop A8 come out as superbly balanced in-ear headphones with great technical ability and superb clarity. But these considerations aside, what’s most important is that they are able to let one just enjoy the music. They disappear as they present you just with the music as it is, without introducing their own colouration. They could be more detailed, they could have more bass depth, but those would be marginal refinements on an already great product. They’re extremely enjoyable to listen to and that’s what counts. They’re earphones I like to listen to for hours, and probably the ones I would carry with me if I had to chose just one.