Moondrop has created quite successful earphones in the past and it seems bent on making its designs cheaper and cheaper. The new Moondrop Aria is basically a KXXS at half the price, which is quite remarkable in and of itself. At just a hair less than $100, the Aria are an incredibly good option for the price if you want earphones with a Harman-like tuning.

Disclaimer: I received this unit from Shenzhen Audio free of charge. They sell the Aria for $79.99.

Moondrop always makes its packaging special in more than one way. The company is famous or putting anime-like characters on their packaging and the Aria make no exception. The contents of the box include the earphones with their removable cable, a hard carrying case and a set of 6 different sizes of eartips. When I said that the Aria are a cheaper KXXS, I also meant that they have the same shells: triangular with very soft curves that help with comfort. The difference is just in the faceplates, which are flat instead of being multifaceted. The other major difference is the paint job: while the KXXS are shiny metal, the Aria are painted matte black with silvery-golden lines (the colour seems to change with the light). The Aria might actually be more elegant! 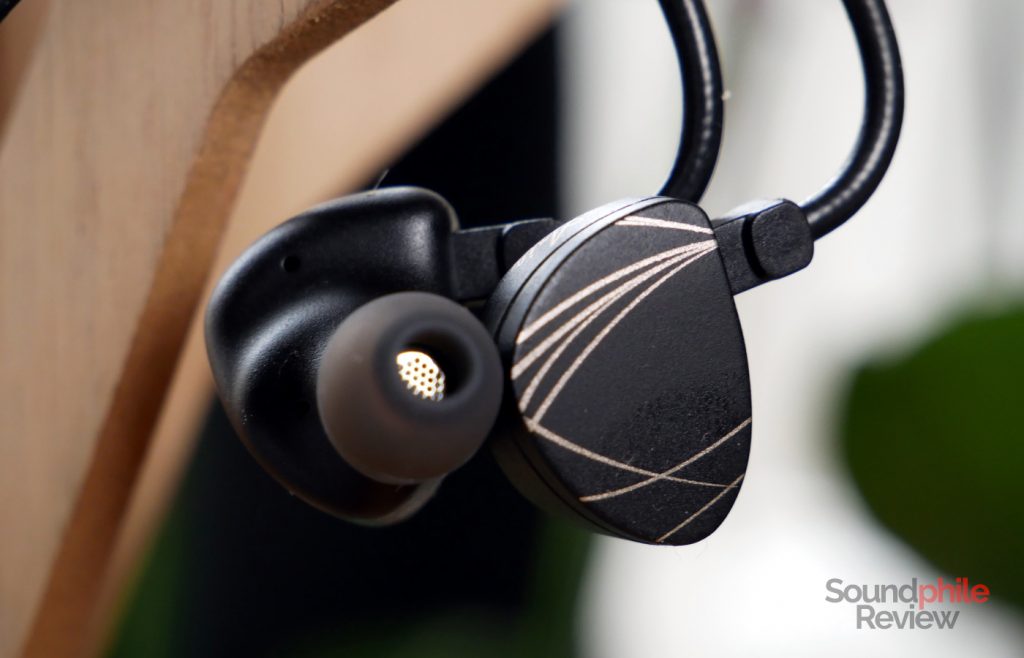 Build quality is quite high and very much in line with expectations (if not above!) for earphones in this price range. There is a visible seam between the shell and the faceplate, but it doesn’t detract from the overall looks or from the feeling of solidity given by the metal. 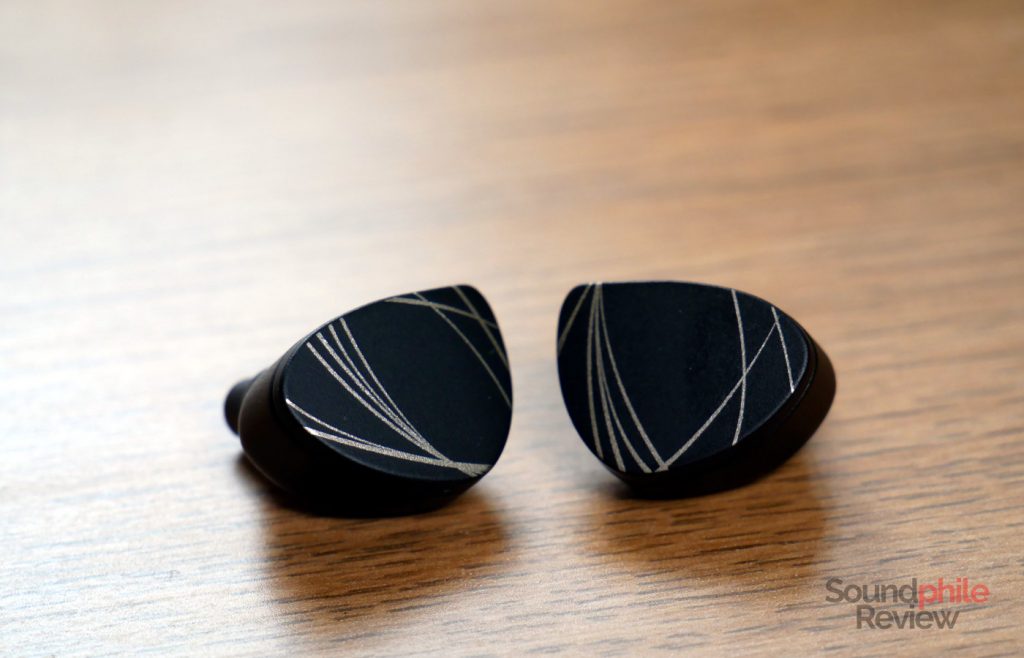 Comfort is exceptionally good, thanks to both the small size of the shells and the presence of the aforementioned curves that make the earphones fit in my ears effortlessly. They don’t apply pressure on any part of the pinna, so they should provide comfort even to those who have smaller ears (though, as always, comfort is deeply personal and your experience may be different from mine). 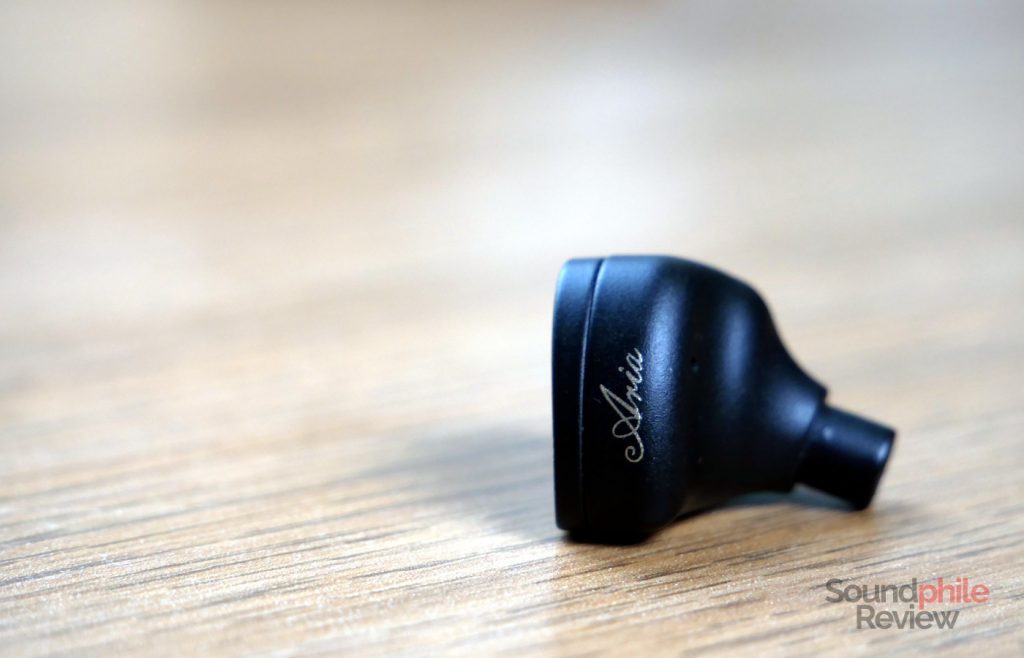 Isolation is lacking, despite the full metal shell. The Moondrop Aria just aren’t great from the perspective of excluding sounds coming from outside. 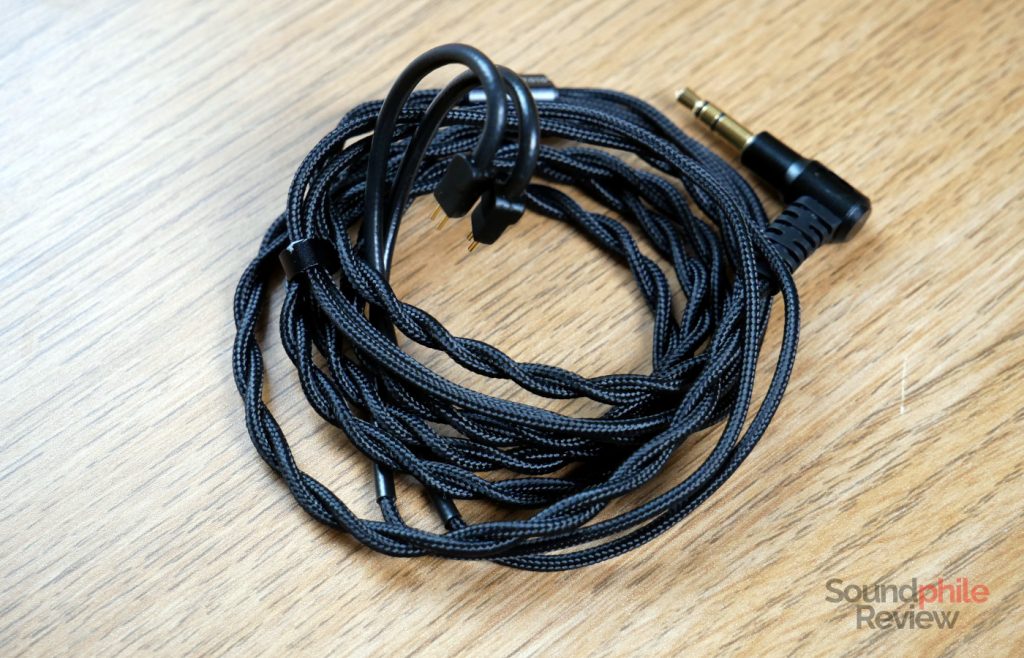 The cable is made of two cores individually sleeved with nylon fabric. Each core is made of silver-plated copper. They’re twisted between the right-angled 3.5 mm jack and the Y-split (which also has a chin slider), but then they split and there’s a single core per channel. There’s very little microphonics and the softness is there as well.

I spent most of the time listening to the Moondrop Aria using a Topping DX7 and a Drop THX AAA 789. Music files were mostly FLACs in CD quality.

Like the other Moondrop earphones, the Aria target the Harman curve. This makes them sound neutral to most people as it is in fact a great compromise between the various components of the sound. The Aria use a 10 mm dynamic driver using the “liquid crystal polymer diaphragm” technology. Its low impedance and very high sensitivity mean that any source is virtually able to drive them to their fullest potential, including most smartphones and laptops.

Soundstage has good lateral extension but little depth and doesn’t often manage to defeat the sensation that music comes from inside your ears, even though sometimes it surprisingly does quite well. Imaging has good accuracy in placing instruments in their own place, but tends to do so in the three main areas (left, centre, right) with little left to the areas in between them. Instrument separation is quite good, though in the most complex tracks it’s not always easy to tell each individual part apart from the rest.

Bass can be seen as mostly neutral: it is mostly concentrated in the mid-bass section, leaving sub-bass a bit behind and without the same presence and energy. Still, extension is quite great for headphones in this price range, though you have to raise the volume quite a bit to hear the lowest notes with enough clarity. Bass is neither super-fast or hyper-detailed, but it does offer very reasonable speed and a great amount of detail that rivals earphones with double the price. The texture of bass in Massive Attack’s Angel is just out of this world for a sub-$100 earphone and is nothing less than stunning. Layering is also quite great.

Midrange has quite good tonality, with the additional touch of presence in the upper area that is typical of the Harman curve. It sounds quite balanced overall, with a good body that counterbalances the upper emphasis. This means that most instruments, from pianos and male vocals to trumpets and violins, have a correct tonal representation and have the same space in the mix. There’s a great amount of detail and there’s quite good speed as well, so transients are convincingly fast.

I find treble on the Aria impressive. It is airy and open, with a lot of sparkle that is quite pleasant and which offers a good counterbalance to bass. Extension is quite good as well, though there’s a cliff in the upmost area. Before that there are a couple of peaks and dips which can make music a bit fatiguing on the long run if it’s especially rich of cymbals; conversely, the dips are felt in that it sounds as if some pieces are missing. Overall it’s still quite a well-tuned treble region. The level of detail is impressive for the price, even more so as it is heard effortlessly.

At less than $100, the Aria have a lot of competition. Let’s see how they stack against them:

The Moondrop Aria are impressive budget earphones. At just $80 they are extremely competent and deliver a great mix of technicalities and tonality. They have just a couple of flaws, which is the added emphasis on upper midrange and the peaks and dips in the treble area, but they are quite minor in the grander scheme. Everything else they execute with incredible ability and that’s quite amazing given how little they retail for.

The value offering of the Aria is through the roof. I’m not one to hype earphones, but these are indeed great and one astounding reminder that price does not always perfectly correlate with price. They’re not “giant slayers”, but surely the Moondrop Aria show how good affordable earphones can be nowadays – while they don’t compete with modern high-end models, they are in many ways comparable to high-end models from just 3 or 4 years ago. They deserve my full recommendation as an extremely solid offering.