Hailed as among the best earphones under $200 and heirs to the acclaimed Kanas Pro, the Moondrop KXXS are among the go-to earphones for people looking for (relatively) neutral tuning and great comfort. A treat that doesn’t break the bank, it seems – so let’s see if they live up to the hype!

Disclaimer: this unit comes courtesy of Lillian at Linsoul. The KXXS retail for ~$170.

Moondrop loves to place illustrations of young girls in their packaging – to my uneducated Western eyes they seem pretty similar to Japanese manga. This is a distinguishing feature, though it only adds an aesthetic touch. Speaking of more substantive things, the box contains the earpieces, their cable, a hard case (similar in shape to the HZSound one in my best earphone case article) and a set of eartips in six different sizes.

One small thing to note is the bad design of the earpiece holder in the box: the hole is too large and leads to the earpieces falling into the cavity. When I opened the box I could not find the earphones and I thought the package did not include them! I had to tear the box apart to take them out. 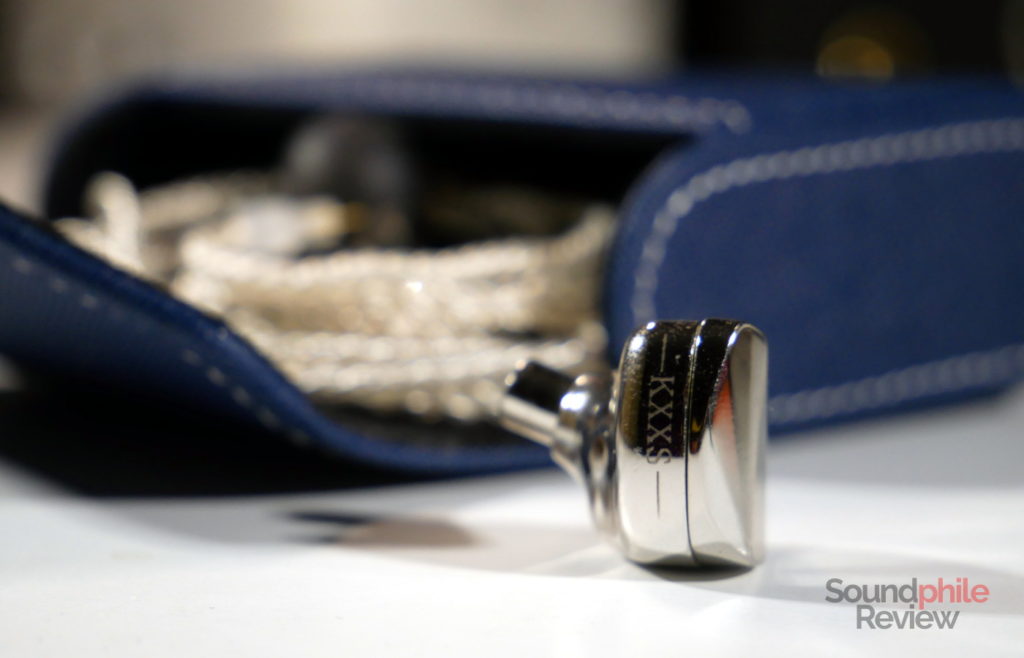 The design of the Moondrop KXXS is really similar to that of the other earphones in the Kanas series – the KXXS are part of the family themselves, after all. The shells are entirely made of metal with a polished, shiny, chromed-like finish. They’re roughly triangular in shape, with a slightly angled nozzle, and they have curves over the whole shell (faceplate included!) that help make comfort better.

Looking at the design in a broader perspective, it stands out for being rather unique because of the curved shapes and the faceting on the faceplate. Curves there are in fact sharp enough to create various facets (without creating sharp edges, though). 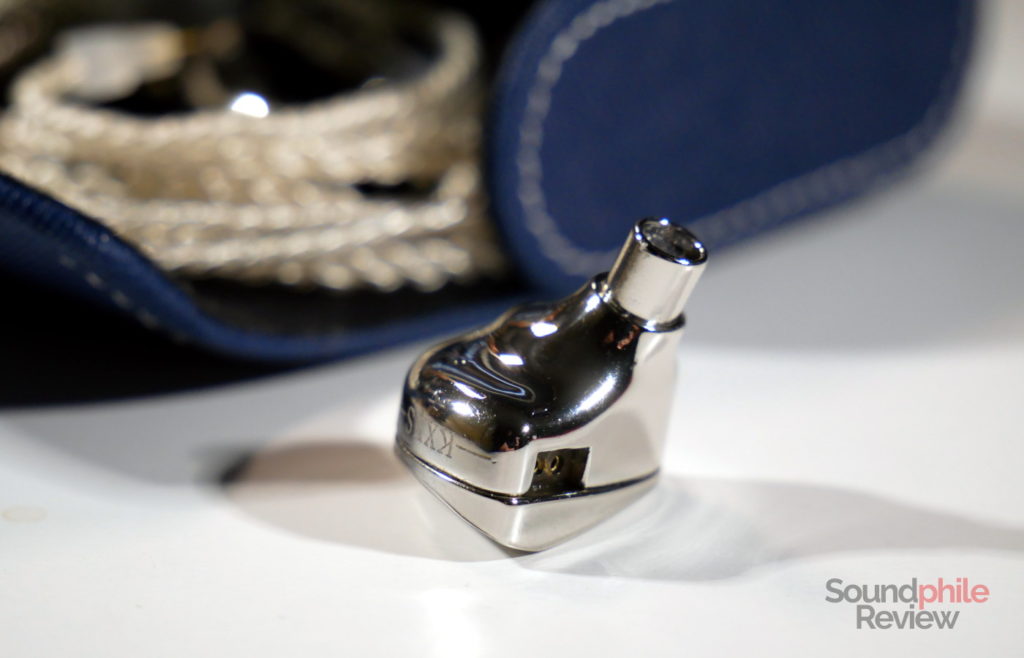 Build quality leaves nothing to be desired and instead appears very good. The all-metal build, with just two pieces, means the earphones should be quite resistant. The shiny finish, though, may prove less durable as it is quite prone to scratching. This is not one of those cases where metal pieces align perfectly and leave no gaps, so in this sense they could be better (though that’s aesthetics more than function).

Comfort is, at least in my experience, exceptional. The absence of any sharp edge whatsoever and the ergonomic shapes make the KXXS comfortable despite their relatively large size. The cable also plays a role, as it is soft enough not to push the earphones too much.

Isolation-wise, the Moondrop KXXS have little to offer. They only offer basic isolation, which is however not nearly enough for common noisy situations such as public transport, open-space offices and busy streets. In order to keep listening to music I always have to raise the volume, even significantly, which is not ideal. 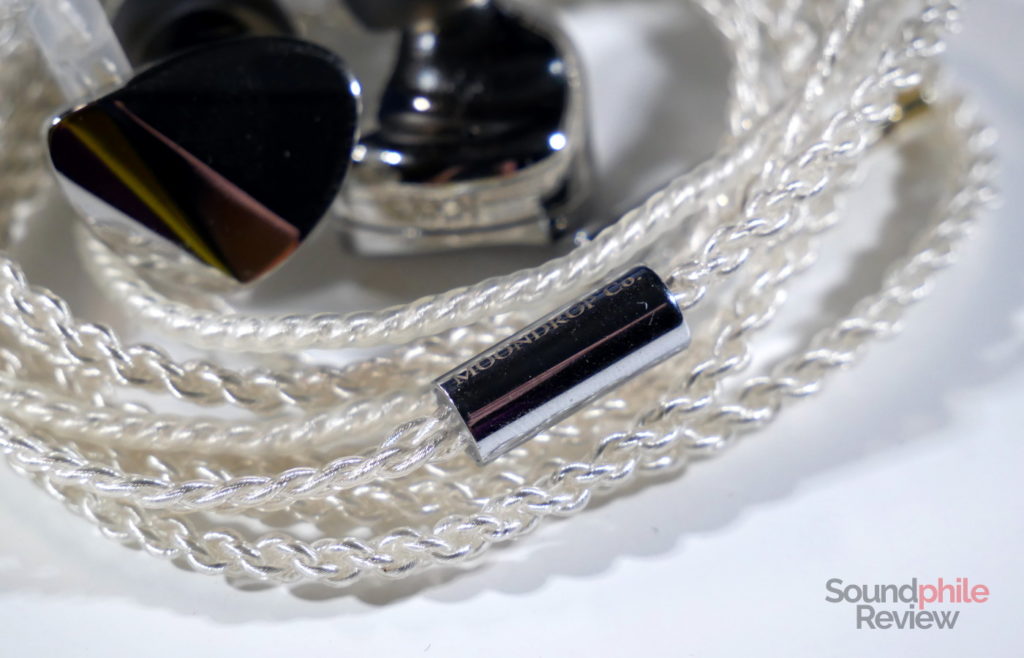 The cable has four cores, each of which is made with silver-plated copper strands. The cores are rather thin on their own and they’re coated with a generous amount of transparent plastic, so the cable overall is not too thin. Judging by its resistance to all the times it got caught in something and came out of it unscathed, it’s also really resistant. The jack and Y-split casings are made of metal, whereas the casings for the 2-pin connectors are made of transparent plastic.

I tried the Moondrop KXXS using several sources, among them: a Topping DX7 (also feeding a Drop + THX AAA 789) and a Burson Audio Playmate at the desk, plus a HiBy R5 and a Shanling M2X while on the go. Source files are the same for both situations, and are mainly FLACs I got by ripping CDs (and therefore in 16 bit, 44.kHz).

The Moondrop Kanas Pro became famous due to their almost-neutral tuning, which was not easy to find in the sub-$200 price range. This feature has been inherited by the KXXS. They are indeed almost neutral in their presentation, and they couple this feature with good technical ability that make them especially interesting given their price. They use a single 10 mm “diamond-like carbon” dynamic driver.

The soundstage has very good width and even good depth, which is quite uncommon in this price range. Instruments appear on a wide front which has some depth, but the most important factor is the size of the space they play in, which is quite large in all directions. You can hear that in Azymuth’s Light as a Feather, where the sound expands in a large space. Even imaging is really good as it places instruments across the stage with good accuracy and with a clear position of instruments in front of the listener. Instrument separation, too, is very good and allows one to discern all different instruments with ease.

Bass is thoroughly enjoyable and close to neutrality. Sub-bass is relatively recessed, but there’s enough volume even at 25 Hz for it to be clearly heard in the mix. Mid-bass, on the other hand, is a bit emphasised and gives a tad of warmth to the sound in general. It’s a small emphasis (not really subtle, but still limited), so it somehow offsets the lack of sub-bass. What I especially like about bass is that it’s fast and detailed: it’s something I always bring up in these cases, but the fact that you can clearly hear the leather of drums bouncing or the vibration of the strings on bass is so satisfying I can’t mention it. Add good physicality on top of this, and you get a very pleasant bass section.

You can hear how upper midrange is emphasised, even a bit more than what the Harman Target curve dictates, by listening to the percussions in Azymuth’s Partido Alto: they sound in the foreground and actually they appear as the main instrument playing. While this tuning may not be to everyone’s liking, the large amount of details and the fast transients somewhat offset this emphasis in my eyes: yes, the instruments appear a bit emphasised, but they’re so well portrayed that it’s actually enjoyable (as they’re not too emphasised, so they don’t sound wrong or invasive). The rest of the midrange appears as more-or-less neutral, with the “less” being some added warmth. What I especially like is the good control exerted on mids: transients are decently fast and accurate, with moderately short decay that make them more impactful; drums, hand claps and strings being plucked all sound enjoyably fast and physical. On top of this, there’s a very good amount of detail.

Treble is maybe the only part which I would change substantially; not because it’s not good, but because there are some issues with linearity. Although extension is in fact good, there’s a very large dip around the 10 kHz mark which is felt. Despite this dip, treble is sparkling and airy enough, with a very good sense of space and a very good portrayal of nuances. The details are clearly exposed and easy to hear, even in crowded tracks; although micro-details are few, the fact that there are any is still remarkable at this price point.

Among the earphones on the market that I can compare the Moondrop KXXS to, here are a few selected comparisons:

While the Moondrop KXXS are by no means perfect, they’re great headphones for the price. At less than $200 they offer some stunning value, especially when it comes to sound quality. They’re balanced enough to sound almost neutral with relatively small deviations from the Harman Target curve (which many perceive as neutral). A few dB difference in the lower and upper midrange areas would make them practically perfect as far as tuning goes. They are amazingly good in all departments, even on the technical front and in terms of comfort. They’re really, really easy to like and for good reason. So yes, I do recommend them – they’re great at $190, so if you can find them for less money be sure to pick them up!