It was only logical for KZ to bring some of the CCA offerings under its own brand and aim higher while at it. That’s why the KZ AS16 were born: they are a KZ-branded CCA C16 with some differences in design (for the better, in my opinion) and tuning (not necessarily for the better, also in my opinion). The KZ AS16 are technical IEMs that forget that technical ability is meaningless if it doesn’t deliver pleasant results.

Disclaimer: Linsoul sent me a free unit in order to write this review. They sell the KZ AS16 on their website and Amazon at $120.

KZ did not use the same packaging they already used for the BA10, AS10 and AS06. They instead reverted to the simpler packaging they used for most of their products: a cardboard box with a plastic lid and slide-on cardboard cover. Inside the box are the earphones, thencable and three pairs of eartips, which is the usual set of accessories for KZ products. 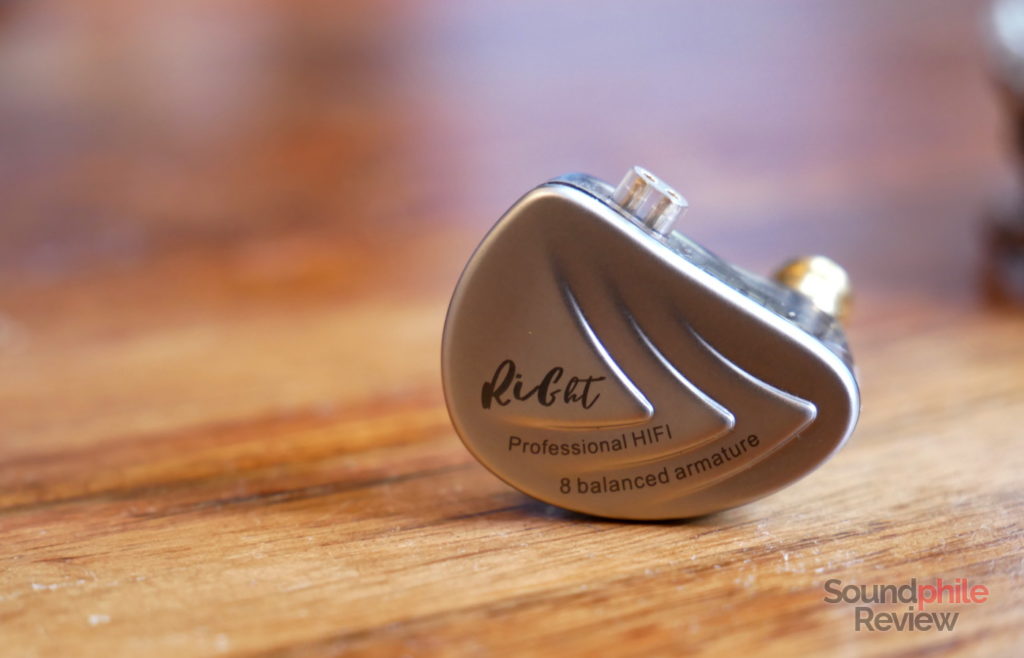 There are just two differences between the KZ AS16 and the CCA C16: the faceplate has “waves” on it instead of being flat and the shell is transparent instead of matte. Everything else is exactly the same, no exception made. For this reason I invite you to read the CCA C16 review.

The KZ AS16 are the usual KZ earphones even though they cost much more than usual. The shell is plastic, and the only metal part is the faceplate; assembly appears to be good quality, although it’s not different than in earphones that cost less than half this sum – I expected KZ to do something more in this sense. On the other hand, the fact that they spent less money on building the earphones should mean they spent more on the acoustic parts – at least theoretically, that is. 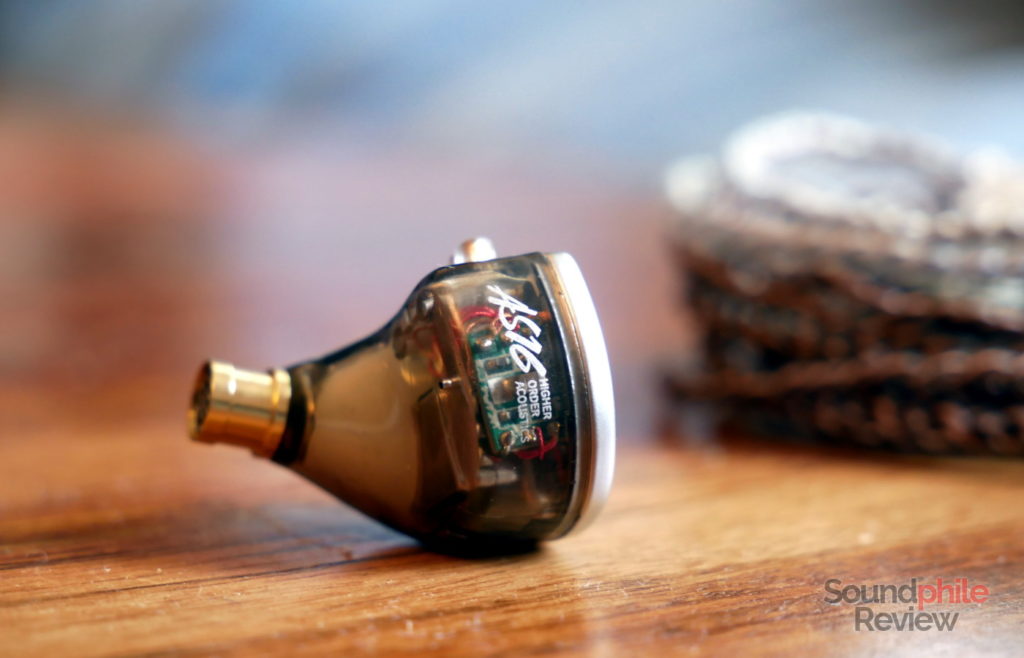 Comfort-wise, the KZ AS16 are not as comfortable as the CCA C16 despite being almost identical. I ascribe much of this difference to the cable, which makes the shells press against the ears in different ways than the C16’s. The shells are still pretty much comfortable and enjoyable, with rounded shapes that make it easy to wear them for prolonged periods of time. They may be a bit large, though, so people with smaller ears may find it difficult to wear the AS16 on longer listening sessions. 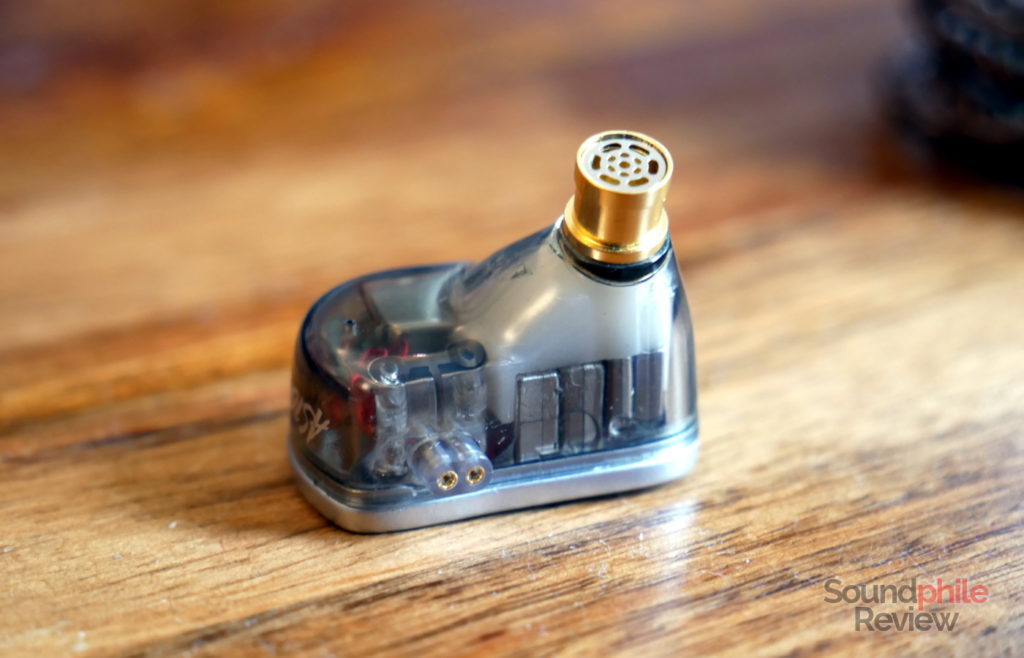 It comes a bit as a surprise that the KZ AS16 offer very good isolation from external noise as similar earphones do not offer much. It may be thanks to the materials used or to the packed interior, or a combination of both (or something else entirely).

The cable is similar to that used for the KZ ZSN, but the ear hook appears a bit more springy than I’d find ideal. This springiness makes the cable press against the pinnae, so it is far from ideal in terms of comfort. Build quality is as one would expect it to be – which is to say, definitely not exceptional and below average at this price point. The jack has a right angle, so it’s ideal for use while on the move with devices tucked away in the pockets.

When testing the KZ AS16 I used the following sources: Topping D30 feeding a Venture Electronics RunAbout 2.0bl, iFi xCAN, xDuoo XP-2 and Shanling M2X. In many cases I also used an iFi Ear Buddy. Source files were mostly FLACs in 16 bit / 44.1 kHz.

The name “AS16” comes from the total amount of drivers inside the earphones: there are eight balanced armatures inside each earpiece. The setup is therefore similar to that of the C16, to which the KZ AS16 are not only related from a design perspective.

Sound extends over a decently wide stage that is wider than it is deep, but that sounds moderately spacious anyway thanks to a sense of a large room it creates. Imaging is more than decent as it allows to tell the position of instruments with sufficient accuracy. It may be due to the high driver count, but the AS16 have very good instrument separation: save for the most intricate situations, the AS16 are able to portray instruments as discernibly individual parts of the mix. In other words, there’s very little mixing of instruments, so the result is a clean signature.

This is the first time I ever hear a KZ IEM with less bass than what I would describe as “abundant”. In fact the KZ AS16 lack bass presence and sound a bit hollow due to this when compared to the other headphones by the company. From a broader perspective, though, the AS16 still have more-than-neutral bass tuning that offers reasonable depth and presence in the mix. It’s not the super-depth one gets with many dynamic drivers, nor does it give the listener the same physical sensation, but it fares pretty well. It’s in fact good for being bass produced by balanced armatures. It’s kept in check so it doesn’t spill over the mids, and if you add good speed and fast decay (as it is customary to balanced armatures) then you can see why bass is enjoyable. There’s also enough detail, though complex tracks will take their toll and expose the limits of the balanced armatures – no micro-detail will be shown, alas.

As bass is much more restricted, midrange has more room to breathe – more than that, actually, as it takes the top spot in the limelight. In fact it is midrange, and especially upper midrange, that is the main ingredient of the signature. Midrange is well balanced in the mix although it appears slightly in front of everything else, so it actually appears front and centre (which is a welcome change given many headphones have distant-sounding midrange). It is undoubtedly bright, with a somewhat large spike in the upper region which makes electric guitars, trumpets and other high-pitched instruments sound a bit aggressive. If you look for detail, then the AS16 offer good performance under that metric: there is a good amount of detail even in relatively complex situations.

Treble has, as I wrote, a spike in the lower area that makes some instrument pop out of the mix, especially cymbals and violins. While it can be fatiguing if you are sensitive to these frequencies, the good news is that the AS16 fare pretty well in the detail department: there’s a lot of detail to be found here, even though it doesn’t go as far as to be micro-detail. It really is a feast for ears. Extension is also pretty good and gives treble some air to breathe, and although there’s vividness I don’t have the feeling of sparkle (this is probably due to some ups and downs in the upper region).

I found the KZ AS16 good for listening to rock and jazz, especially when there are brass instruments. They really shine, just like electric guitars.

Here’s a selection of comparisons against earphones:

I would not recommend the KZ AS16 to those interested in thumping, kicking bass, but it’s otherwise an interesting proposition to listeners who don’t mind sound being a bit bright. Those sensitive to the upper region may find them unappealing as upper midrange and lower treble may be a bit too aggressive for their tastes. The AS16 are more than decent in the technical department, I would say that they are well positioned to entice people who look for detail and for that additional vividness in wind instruments and electric guitars. If you want to listen to Santana (or any other great guitarist!) and hear that guitar cry, the AS16 may be for you.