iFi’s portable line is expanding and offers more connectivity options. The iFi xDSD is part of the Bluetooth line, but it also offers full connectivity using the traditional USB port. USB is by far the only “traditional” thing here, seeing how everything else is quite exceptional (as in “not in the norm”). The iFi xDSD combines a powerful amplifier with a good DAC section with a portable form factor that makes it perfect to listen to your favourite music both on-the-go and while you are at the desk.

Disclaimer: this unit was loaned to me in order to publish this review. More information on the company’s website. The device retails for $399.

iFi sticks to their tried-and-true approach to packaging, so the xDSD comes in a rectangular cardboard box which holds the device, a USB 3.0 extender cable, a Velcro-like sticker and a soft fabric bag. All in all it’s a complete set of accessories. 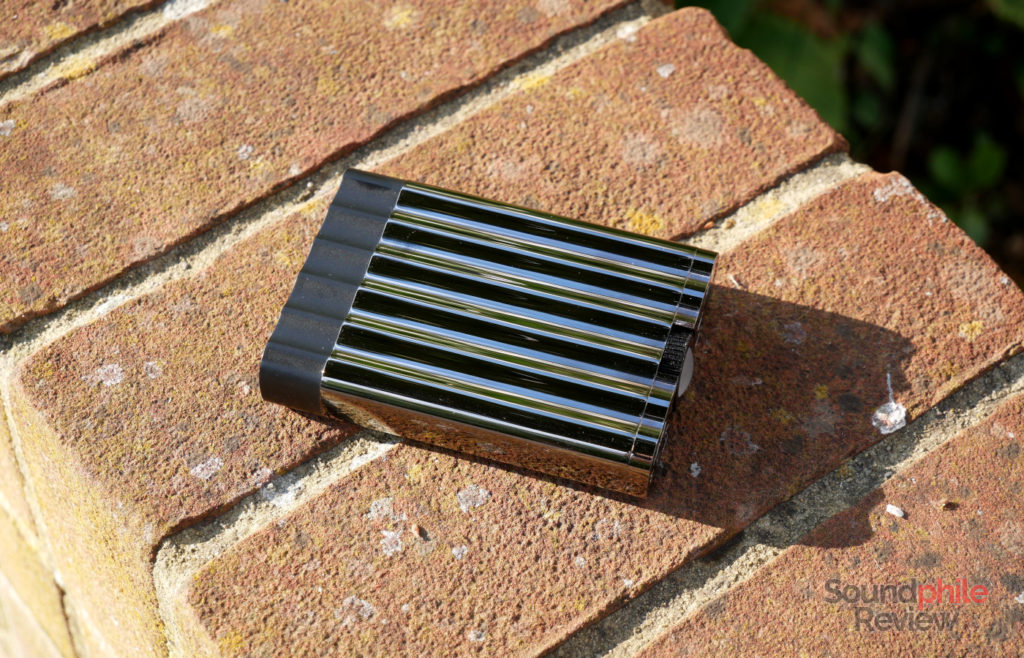 The design of the iFi xDSD is shared with the xCAN and seems to be that of the “x” family, which may expand in the future with new products. The shell is characterised by being made of shiny, reflective chrome-like metal with the rear made of matte black plastic. The shell is shaped with “waves” on it that make it look rather unique if not downright odd.

The company had to use plastic on the rear to allow the Bluetooth connection to work: building the whole device with metal would have meant to either create a Faraday cage that would have blocked the signal or to use part of the body itself as the antenna, with a host of different issues (iPhone 4, anyone?). This choice allows for better management of the signal. 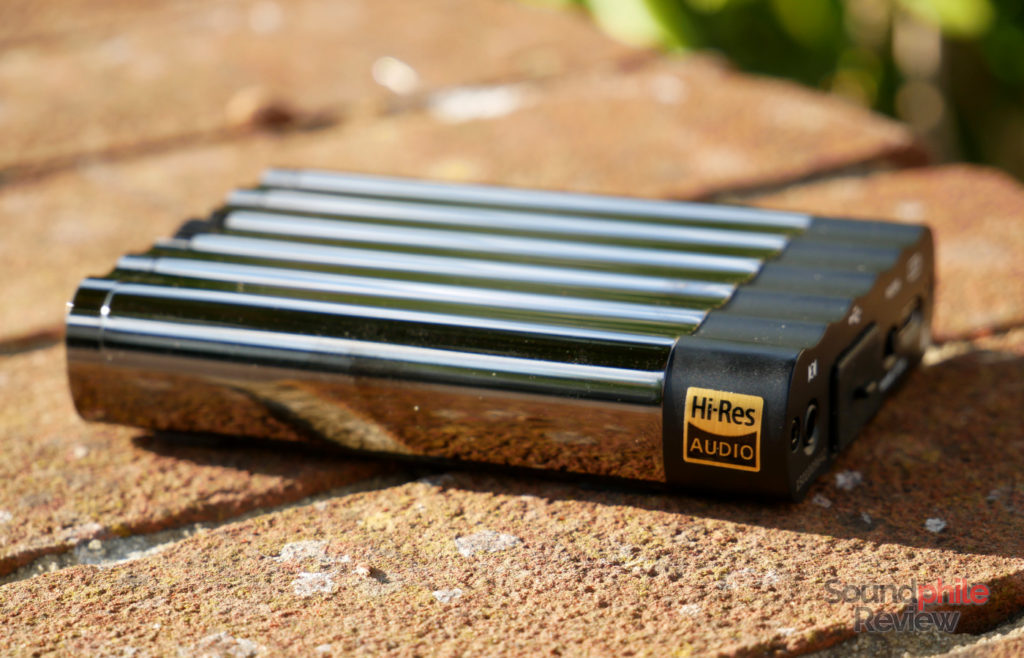 On top of being made of metal, a fact that makes the iFi xDSD resistant and durable almost by itself, it is made of good quality materials and is well assembled. Assembly is in fact almost flawless, as there are no weak parts or joints and the seams are almost non-existent. The shiny finish is only a concern because it gets dirty in no time (it is a very strong fingerprint magnet) and also because it is more at risk of being damaged and scratched than matte finishes. 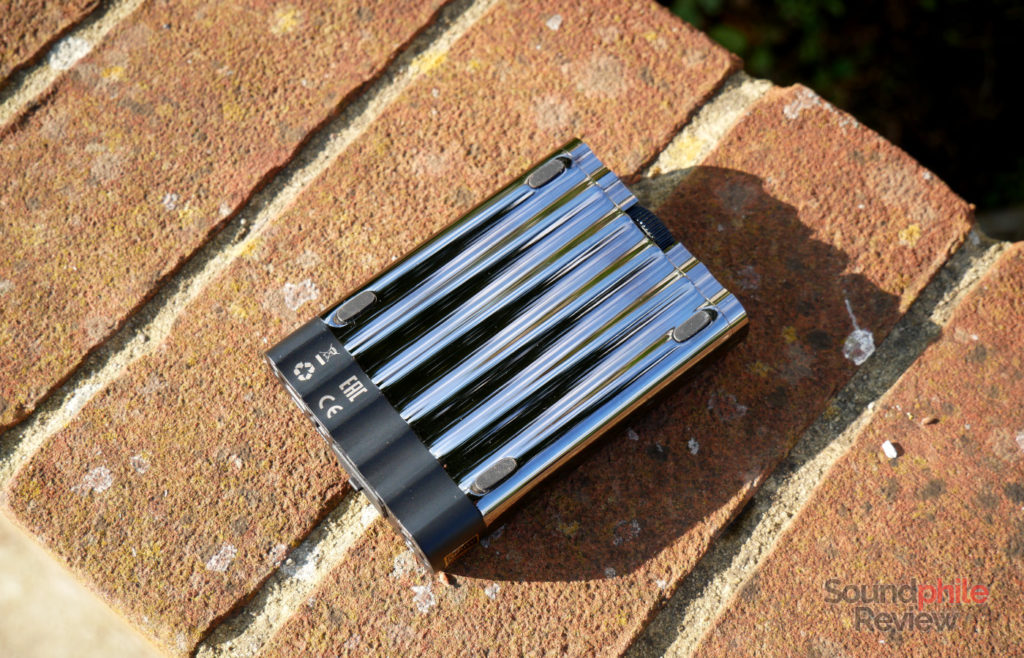 On the front of the iFi xDSD are a rotary wheel with a semi-transparent circle which shows the iFi logo (and which also acts as the power button), a 3.5 mm jacks, two status LEDs, a button to switch equalization modes and two LEDs that show currently-enabled options (XBass and 3D+). On the back we find a full male USB Type-A connector, a USB Type-C port, a selector for the filtering and a TOSLINK output.

The volume wheel is not really a knob, as it is a rotary wheel that spins endlessly and has predefined intervals of rotation indicated by a “click”. A LED light hidden inside the wheel acts as a status LED (e.g. indicating that the xDSD is in pairing mode) and also as an indicator of the current volume, with different colours for each volume bracket. The volume is well controlled and there is no imbalance or dead zone, so the device offers full control over the volume without the need for attenuators (though it actually needs them for other reasons: see the “Sound & Specs” section). 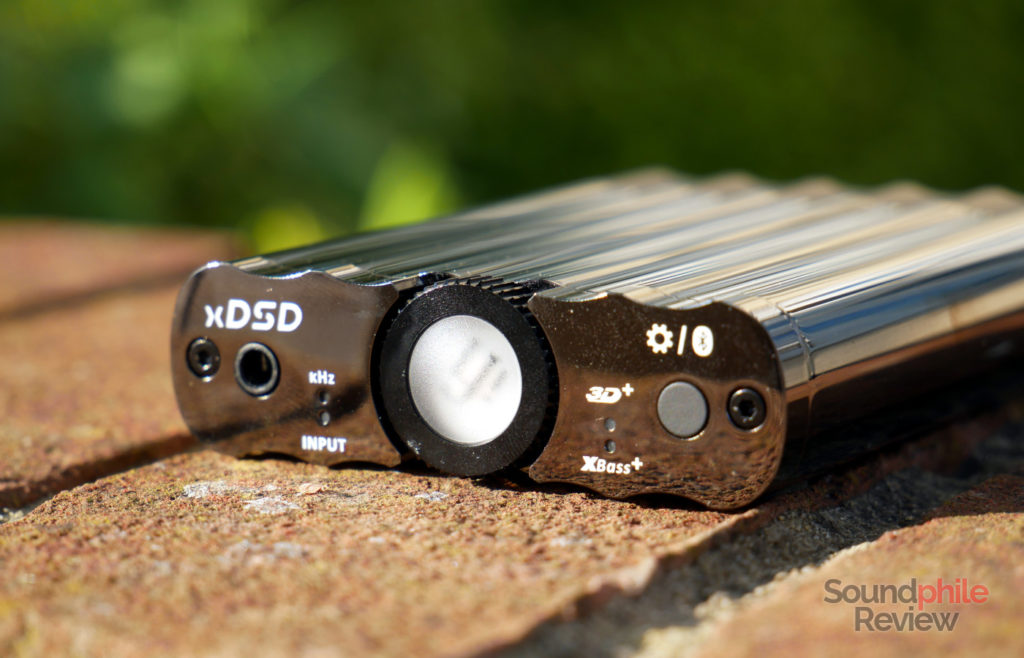 The iFi xDSD is meant to be used as an all-in-one device that acts both as a DAC and as an amplifier, and only as a headphone amplifier: there is no specific line out port as one needs to put the unit in line-out mode by pressing the options button on the front while the unit boots up.

Codecs supported when using Bluetooth (which is an unspecified revision) are the usual SBC, plus AAC for iOS devices and aptX for Android devices. There is also aptX LL, which stands for aptX Low Latency. This specific version reduces latency to the minimum, so one can use the xDSD even for movies, games and other content that requires low latency. LDAC or other super-duper-high-quality codecs are not supported. 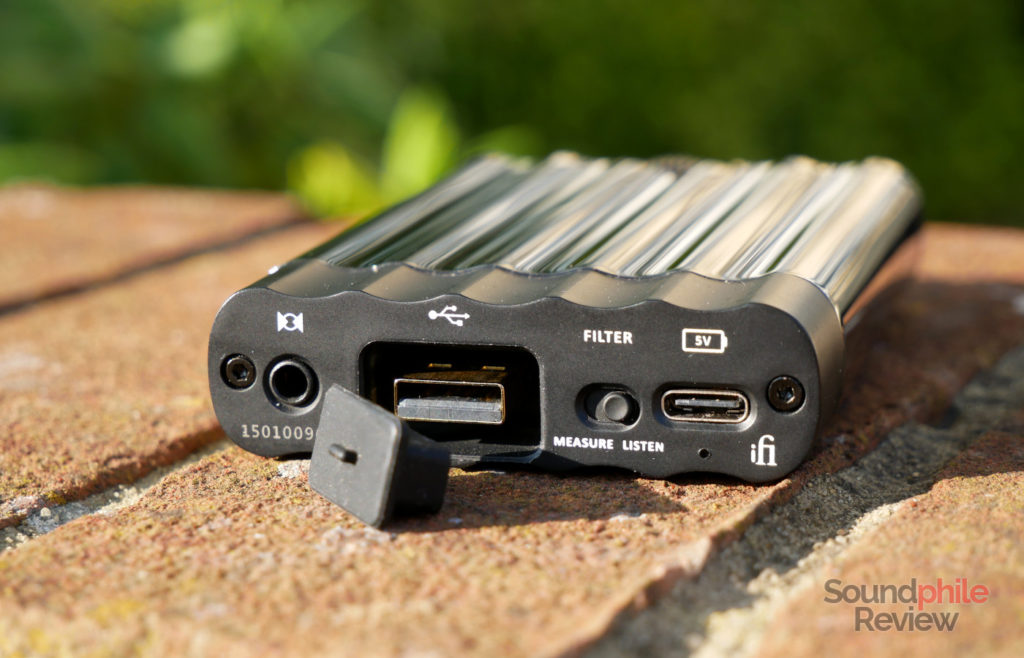 The xDSD is purely a DAC/amp, meaning that it cannot be used as an amplifier only: there’s no way to use a different DAC and only take advantage of the amplifier section. This may be a bit limiting, but it should not be a problem unless the source device is not compatible with it – and this should be a rare occurrence.

As the volume wheel spins freely, having no maximum nor minimum, it uses colour to indicate current volume: going up, colour goes from blue to purple, then light blue, green, yellow and red. This is really effective in giving the listener a clear idea of how much power is being squeezed out of the device.

The iFi xDSD is not nearly as powerful as its sibling the xCAN, but it offers loads of power anyway: 500 mW on 16 Ω is more than enough to drive most headphones on the market but the most demanding ones.

As on the iFi nano iDSD Black Label, the xDSD features the “S-Balanced” mode that uses one DAC per channel and then combines the two signals in the one that is used on the (single-ended!) 3.5 mm jack output. According to iFi this should lower noise and crosstalk, therefore delivering many of the benefits of balanced connections.

The Bluetooth connection is not really strong and the signal drops if the xDSD is not in direct line of sight of the source. Just being at one metre from the Bluetooth source and facing opposite it while keeping the device in hand makes the signal drop.

Out of the 6-8 hours of battery life that iFi claims to be possible, I was able to use the xDSD for around 6 hours – so the claims are true. It has to be noted that the iFi xDSD does not power off when it is not used, as iFi confirmed to me, so it continues to drain the battery until it is completely dried up. The good news is that it does not draw too much power when it is idle (there’s some advantage in not being Class A, after all!), so it can support around 5 hours of playback and 2-3 hours of idle time. This leaves a bit of flexibility to its use, though leaving the device on and forgetting about it will almost surely mean that it will be drained out of battery the next time you use it.

Although it has a full-size USB port, only the USB Type-C port is able to charge the device. This choice is similar to that of other manufacturers – e.g. the Topping NX4 DSD and the xDuoo XP-2 – and it is useful when using the xDSD with a mobile device such as a smartphone, a tablet or a DAP: it won’t drain their battery while it’s in use.

As always, I used a variety of headphones to test the amplifier; among those are the Sennheiser HD 6XX and the HiFiMAN HE-560, but also the Fearless Audio S8 Pro, the Tin HiFi P1, BGVP DMS and the Moondrop A8. Non only did I use the iFi xDSD with a Shanling M2X DAP using Bluetooth, but I also used it as a “standard” DAC by connecting it to my computer using the provided USB cable.

The overall tuning of the xDSD appears to be neutral and it does not deviate significantly from that. It drives the headphones with authority even when they are demanding in terms of power; as a practical example, I tried the HiFiMAN HE-560 and the xDSD was able to drive them perfectly to high listening volume (not deafening high volume, but still more than usual). Not only that, but the xDSD is fast and able to deliver the right impact on transients. It’s an overall very likeable listening experience, with the right tonality and without adding anything specific to the sound. It can therefore drive practically anything without getting in the way.

Whether you use the xDSD through USB or through Bluetooth, it does not change much in terms of sound signature. Of course the wired connection offers better quality, but that’s about it: I could not hear any significant difference in terms of tuning, so the two connection modes are equivalent in this sense. Even using aptX, the Bluetooth mode is less detailed than the wired one.

The iFi xDSD, just like the micro iCAN SE before it, offers the XBass and the 3D technologies – though in this case the technologies are the XBass II and the 3D+, which are improved versions of those seen on the micro iCAN SE. The XBass II technology emphasises the lowest part of the spectrum and it decreases the emphasis going up with the frequencies, and the emphasis is still present in small quantity until the lower midrange. Contrary to the xCAN there is no selector and the effect is applied without any possible setting.

The 3D+ technology makes the soundstage larger by shifting everything up and by adding emphasis on the upper range. This emphasis makes everything sound a bit odd, and even a bit off, but it’s a trade-off to get a real enlargement of the soundstage. It appears wider and even deeper, so it really appears to be an improvement if you are looking for that!

The iFi xDSD also features a filter system. The filter can be set to either “measure” or “listen”. Telling the difference between the two is so hard it’s almost impossible; the changes are so slight that it’s difficult to tell whether they are there or not. The “listen” one tends to be a bit softer than the “measure” one, in the sense that transients are not as clear-cut, but that might well be a wrong impression – again, it’s practically inaudible.

The iFi xDSD stands out as a versatile portable DAC with a very strong amplifier section. It’s in fact remarkable how iFi managed to create a device with such specifications in such a little package. This may be the ultimate all-in-one portable device, which only lacks analogue input to be truly complete. The only significant flaw I can find in the xDSD is the background noise, which is an issue with sensitive IEMs. It’s otherwise an exceptional device from any perspective.