iFi has been shrinking the size of their products lately, but with this loss in size and weight does not come a loss in functionality or power – on the contrary, the company has been consistently adding new features to its new products. The new iFi hip dac appears to be the first in a new line-up and somehow outputs 400 mW.

Disclaimer: this unit was loaned to me by iFi directly. It sells for $149.

We’ve already seen the iFi hip dac being unboxed, so I recommend you to read that article to find out more (and to see a few pictures, too). In short, the box holds the hip dac, a USB to USB-C cable, a USB to female USB cable and a USB-C to female USB cable (basically a USB OTG cable for USB-C devices). 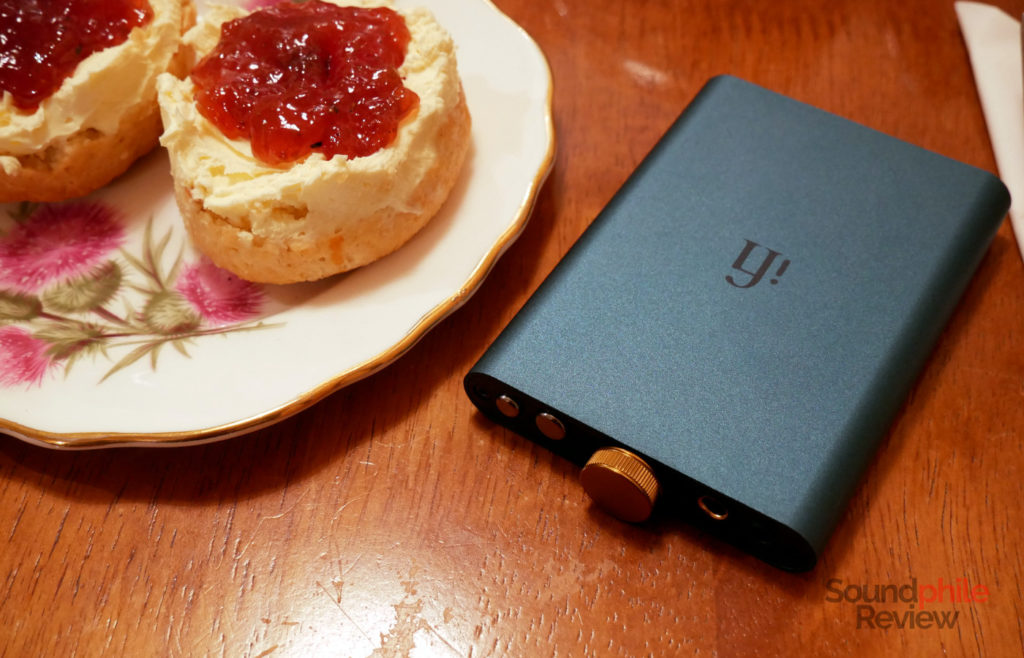 The iFi hip dac reminds me of a hip flask… which I actually did not know it was called like that in English, so the DAC’s name actually makes total sense! The styling is definitely retro, with the cerulean body (or petrol blue, as iFi says: colour names are hard) being topped by the bronze/copper volume knob. The most notable thing is however the colour in and of itself – you don’t see much blue stuff in the audiophile world, where most products are black or silver. 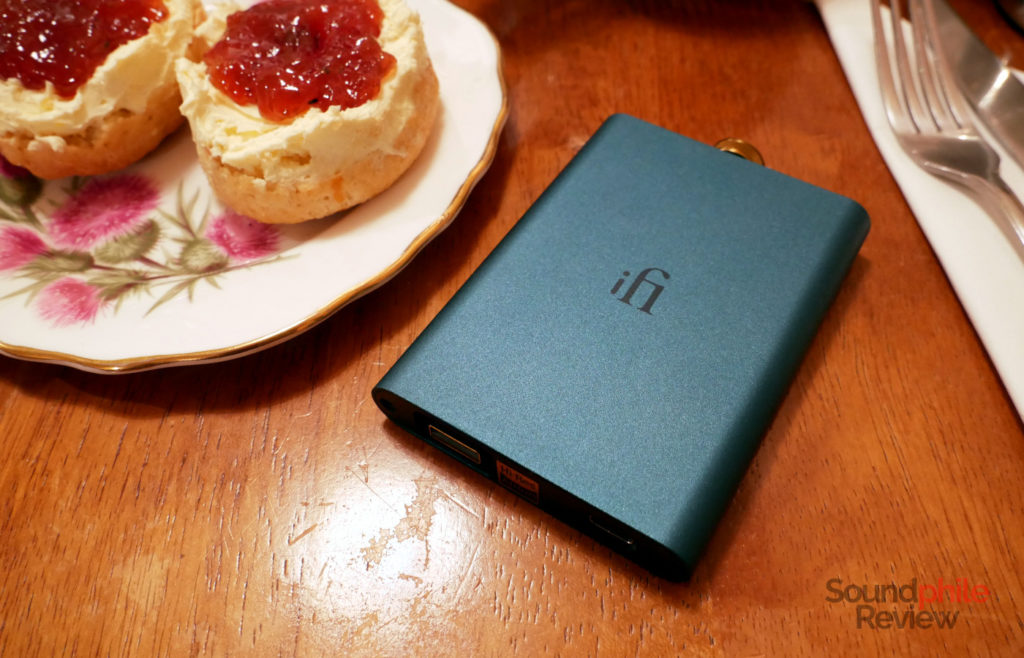 The body is built out of aluminium, a single block of metal with plastic at both ends. This makes it quite resistant and durable – it should be a long-lasting device as far as build is concerned. The aluminium is not perfectly smooth and has a grainy texture which actually helps with grip. 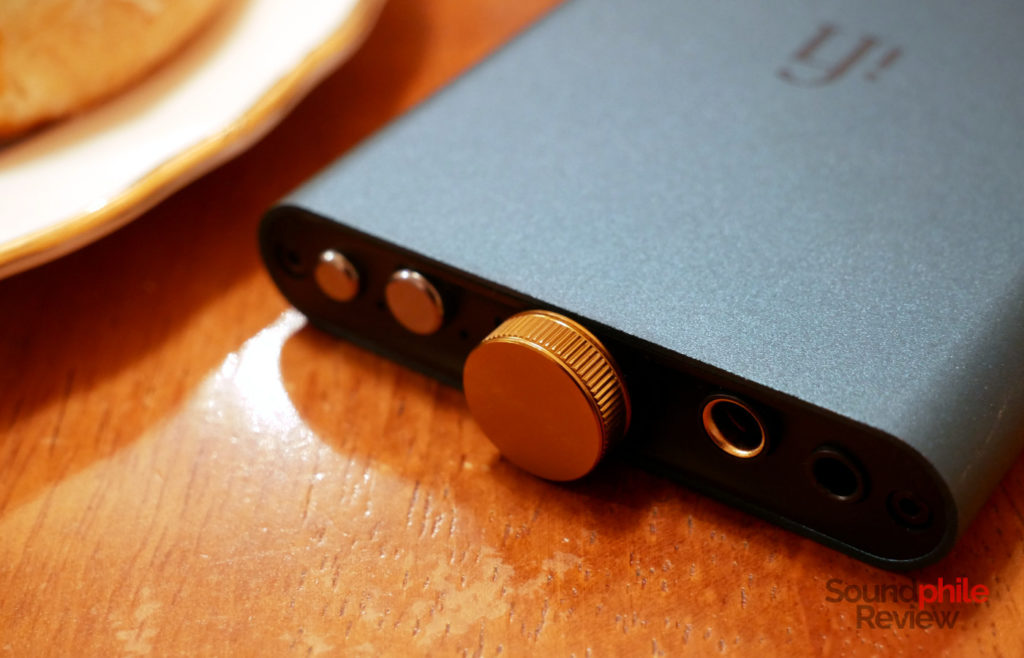 The upper end hosts the volume knob, the status LEDs (one at each side of the knob), the outputs (3.5 mm and 4.4 mm jacks), the gain button and the XBass button. The other end is home to a male USB-A connector and to a USB-C connector with a LED which indicates whether the device is charging or not. The LEDs around the volume knob show which kind of stream is being reproduced: there are various colours that tell you whether the stream is PCM (44/48 kHz is green, ye 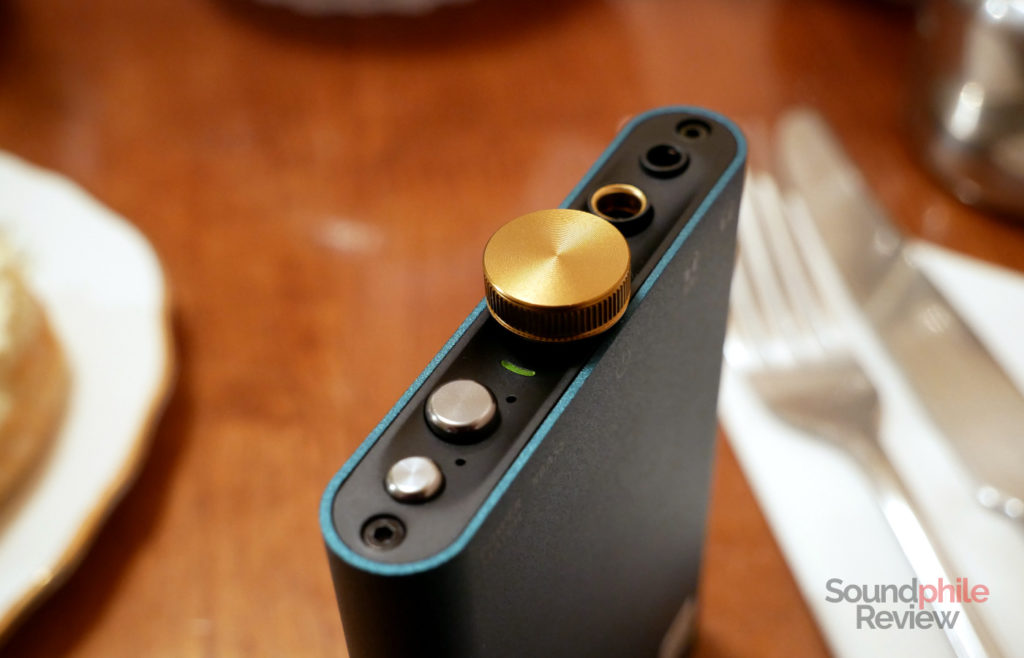 The volume knob also acts as the power switch and then spins freely, with a smooth motion that requires a bit of force to activate. This is especially important as it means it won’t spin while you keep the hip dac in your pocket, and it also allows for better precision in adjusting the volume. There is a silent zone when one begins to spin it, but it’s really small. The knob is also analogue, which should be theoretically better than a digital one. 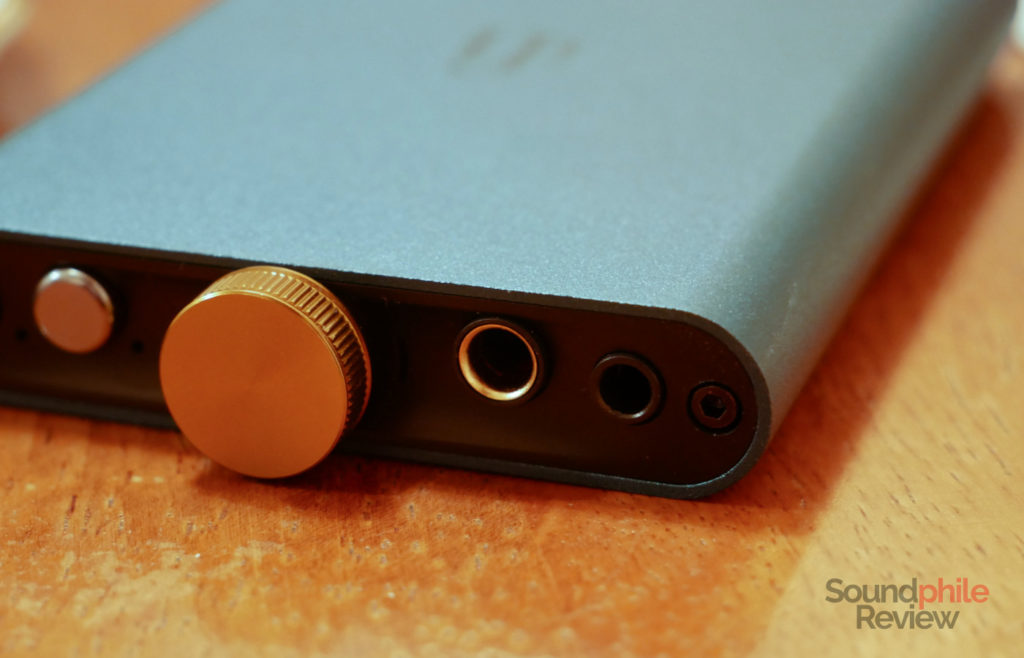 As the name says, the iFi hip dac is purely a DAC: it needs a digital source, more specifically a USB source, in order to work. One can therefore not take advantage of the amplifier alone and must use it with the DAC stage, too. On with the nerdy part, specs!

iFi does not really publish much technical information on the hip dac – they just tell us the maximum output power is 400 mW at 16 Ω but they don’t even specify whether this applies to balanced, unbalanced or both. 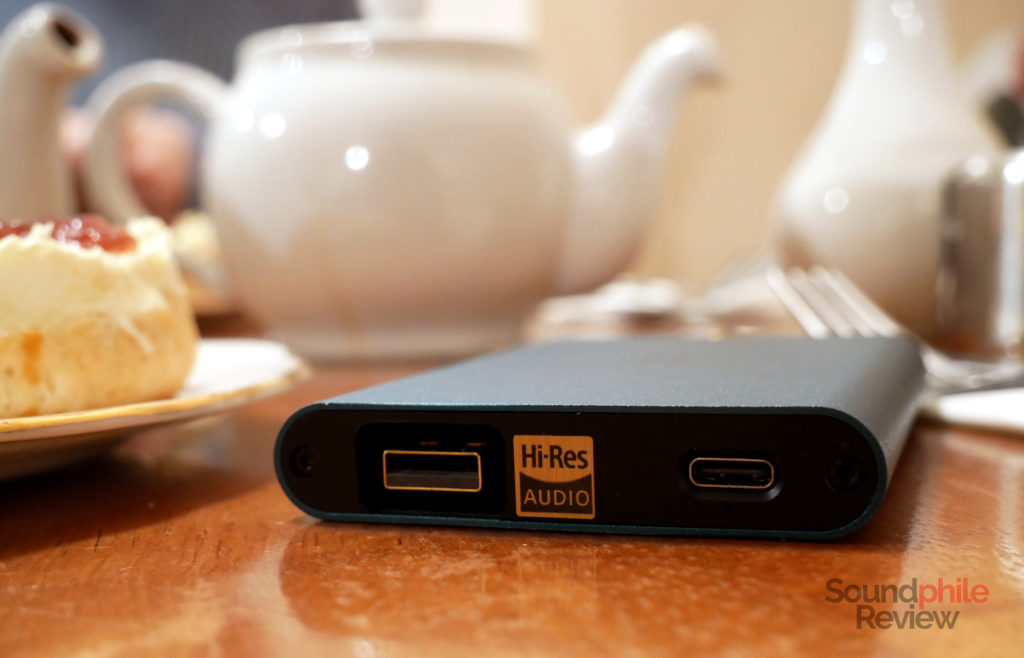 iFi keeps on using Burr-Brown DAC True Native chips just like in previous products, as they believe them to still be the best on the market. They pair them with their own amplification stage developed in-house. Power output is more than enough to drive my HiFiMAN HE-560 with ample room to spare. In fact I don’t even have to use the larger gain in order to get to a comfortably high volume. On the other hand I found power output to actually be excessive for more sensitive earphones. So while you generally don’t need an attenuator with the hip dac, sub-32 Ω earphones will probably benefit from it unless you want to damage your hearing.

The iFi hip dac actually uses just one DAC chip, despite offering a balanced output. The main advantage of a balanced signal path is that it offers less noise. The hip dac offers simlar advantages even when using the standard 3.5 mm output as it uses what iFi calls the S-Balanced tecnology: the DAC works as if it were outputting the signal to a balanced connection, but then this signal is instead transformed into single-ended. This should theoretically be a “best of both worlds” approach – less noise but no special connector. 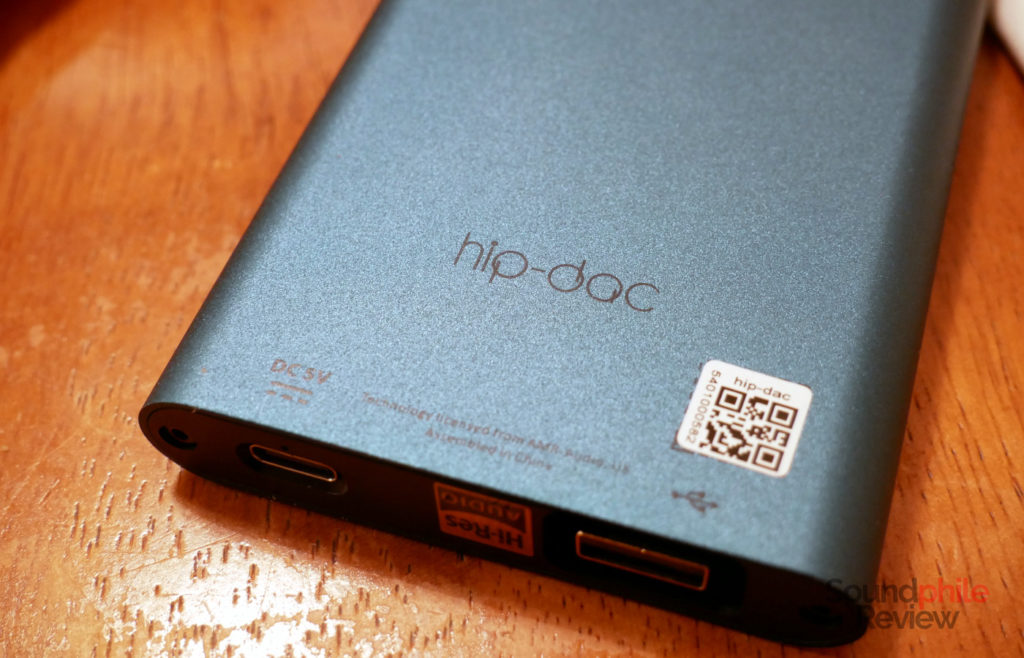 Using a mixed array of headphones to test the iFi hip dac I got about 10 hours of playback on a single charge, which is quite good considering the size of the device. This is quite good actually, though I was not able to get the 12 hours advertised by iFi.

As the volume knob acts as a power switch, the hip dac does not automatically turn off – so if you forget it on like I did multiple times, you will run out of battery faster than you’d like.

One thing I also like is the fact that the full-size USB port does not drain battery from the source device: in order to charge the hip dac you have to use the USB-C port, so you can use the hip dac with portable devices (laptops, tablets, phones) without draining their battery. iFi notes that the hip dac will keep on draining the battery if you connect the USB-C cable when the device was already on.

I tested the iFi hip dac using various headphones and earphones, including the Spirit Torino Radiante, the HiFiMAN HE-560, the Shozy Form 1.4 and the NiceHCK NX7 Pro.

There is a tiny bit of hiss in the background, but it’s so faint it is only noticeable when there is perfect silence and no music is playing. Plus, I have only been able to hear it using highly sensitive IEMs.

As far as I am able to discern, the iFi hip dac offers no colouration of the sound it produces. In fact it offers a neutral signature which makes it undistinguishable from other gear I’ve tried (e.g. Burson Audio Playmate, Shanling UP4). In fact it’s even really good as far as speed is concerned, with a fast transient response. I can’t really hear anything that strays from neutrality and a reproduction of music “as it is”. If there is any difference, then I can’t hear it (and I probably would not be able to measure it, either).

Contrary to previous devices by iFi, the hip dac does not offer their famous 3D+ technology. The XBass tech stayed, though, and it increases presence of lower frequencies. In particular, it gives the largest boost to sub-bass with a decreasing emphasis as frequency goes up. It is very well implemented as it does not make bass overwhelming and instead it only gives it more presence (though of course that also depends on the signature of the headphones, as bassy headphones will probably end up having too much bass).

Here’s a brief comparison with other similar devices:

Please, iFi, stop making wonderful products, I’m tired of giving you very high marks! On a more serious note, the iFi hip dac offers extremely high value. It’s almost an audio miracle as it is so small and yet it packs such a large output power with a few additional features on top of it. It’s small, portable, powerful, well-built. And it’s amazing how iFi managed to offer it for just $149. What else could one want?

VE Monk Plus review: the best $5 you can spend