Radiating. That’s what “radiante” means in Italian, and the name was chosen wisely given how the Spirit Torino Radiante works. Spirit Torino’s founder, Andrea Ricci, decided to tackle the issues of designing closed-back headphones by circumventing them with the use of a passive radiator. An interesting – and practically unique – take on the closed-back concept which makes the Radiante exhibit many of the features of open-backs with less of their drawbacks.

Disclaimer: I got this unit on loan directly from Spirit Torino. They sell the Radiante for €2,200. Additional information is available on the official website.

I received one of the first production units right out of the laboratory, so there was no packaging at all! I was told the units would come in a new wooden box the company is working on, which appears to be quite great. 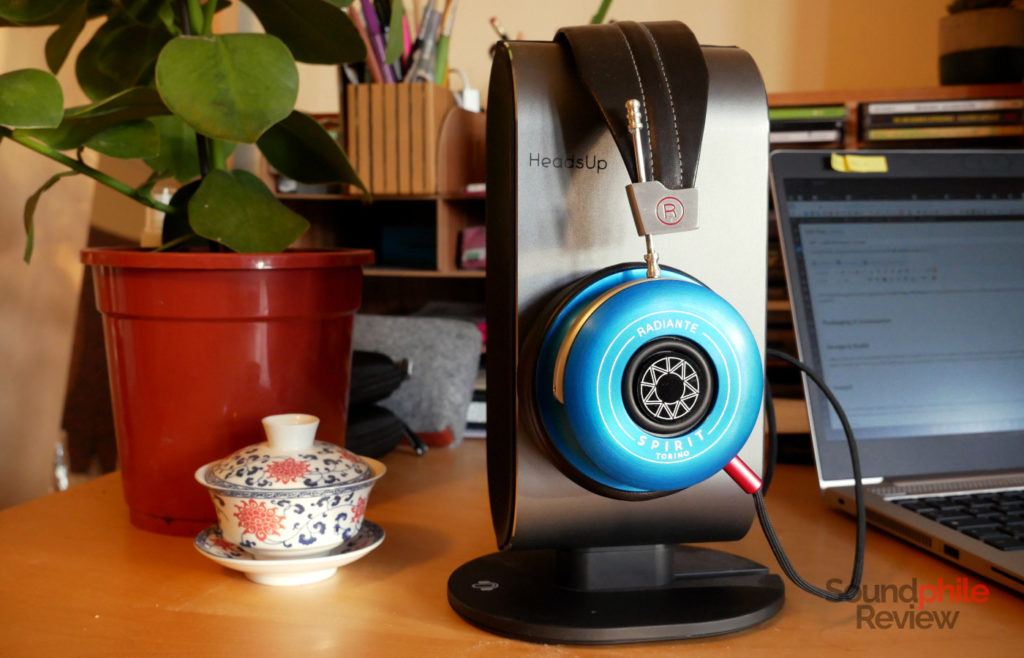 The Spirit Torino Radiante are closely related to the Spirit Torino Twin Pulse I already reviewed and this is apparent once we look at their design: the design is actually identical, with the only difference being the presence of the passive radiator on the back of the earcups. The other major difference is the new set of earpads, which is angled and made to fit the ears much better. 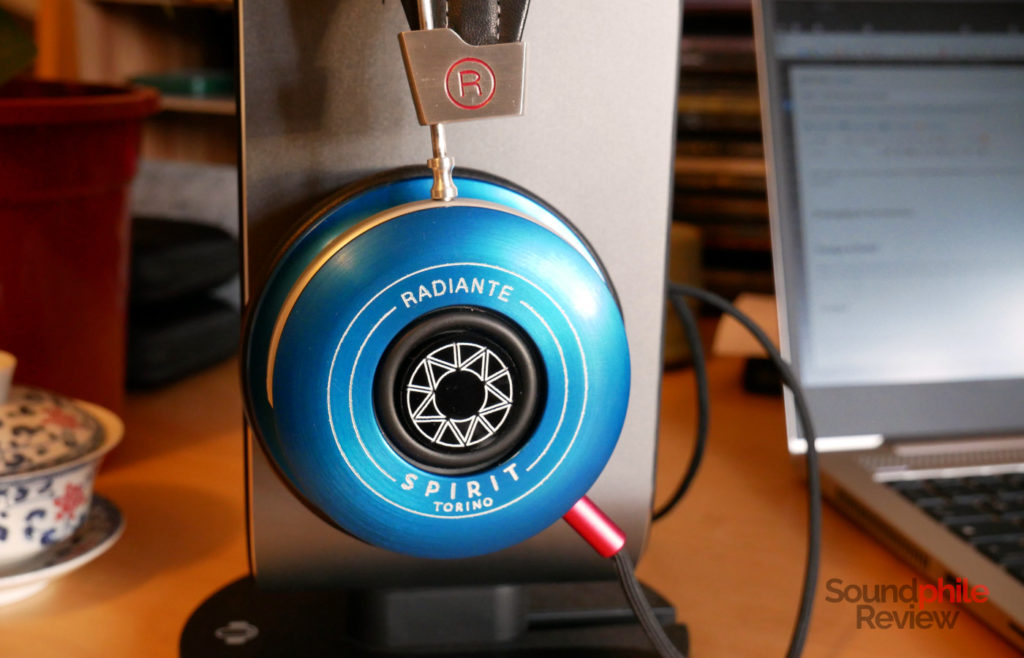 The earcups are made of a single block of aluminium, carved to size and shape and then coloured (in blue, in this case). They are massive and that’s a large chunk of why the Radiante weigh 460 g (without the cable!). Spirit’s logo stands out in the centre of the earcups, where a black plastic disc with a black rubber surround stands. This is the passive radiator I mentioned previously: it should filter noise coming from outside while providing some relief from the pressure the drivers inside the earcups build, thus providing the energy they produce a way out and making the sound more open-back-like. 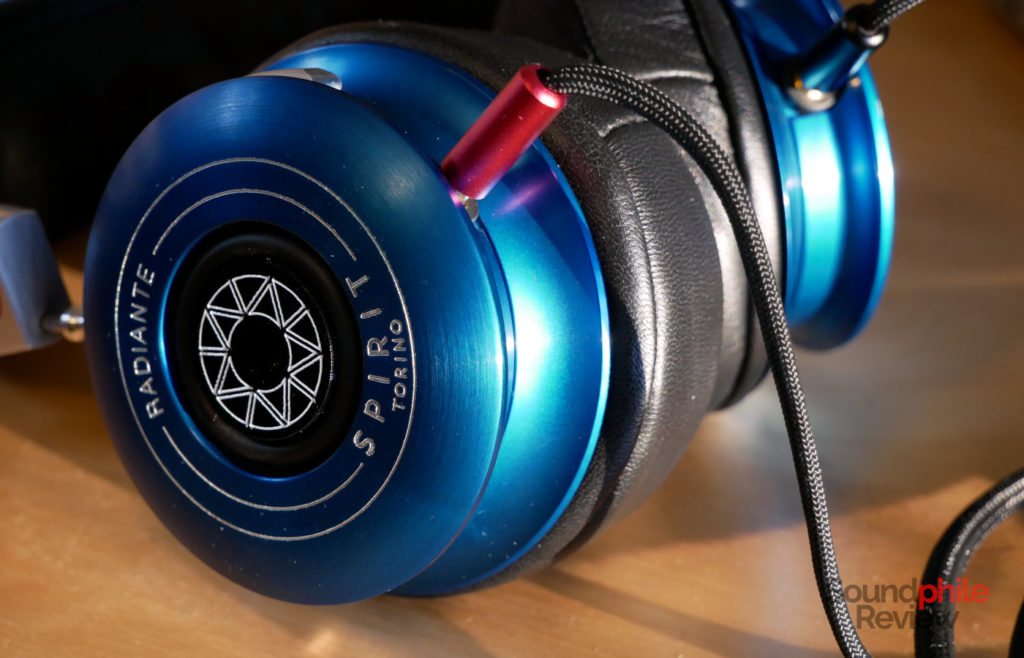 This works the other way around, though, and the isolation afforded by the passive radiator is limited. It offers a bit of noise reduction, but you can still clearly hear what’s outside, more so than with “true” closed-back designs. We may say the Spirit Torino Radiante are semi-open as they sit halfway between completely open and completely closed designs in terms of passive isolation. 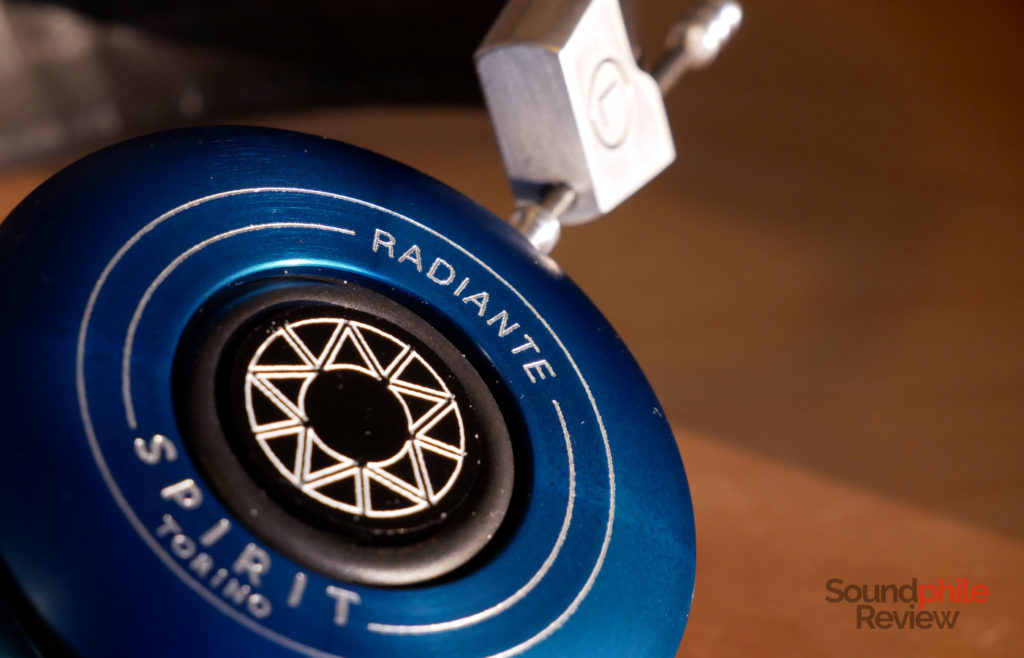 Spirit Torino claims they use massive aluminium frames because they are “inert” (they call them “inertial frames”): their idea is that if the frame is big and heavy it won’t move because of the driver and it will have less resonances, so the sound will be purer. The result is that the Radiante weigh roughly half a kilogram with the cable…

The headband is the same as it was on the Twin Pulse: large and poorly padded. This makes the Radiante not really comfortable to me, though I do have a very sensitive scalp that is easily irritated – so I am not the best reference when it comes to assessing comfort. Still, I think that the lack of padding, the small area where the headband presses on the scalp and the complete lack of support from the earcups concur in making the Radiante headphones few people will find comfortable.

The earcups, made by Dekoni, are on the other hand a clear improvement over those found on the Twin Pulse: they’re now softer and covered in Alcantara, with an angled shape that makes them enclose the ears effectively, thus improving comfort and providing better isolation. 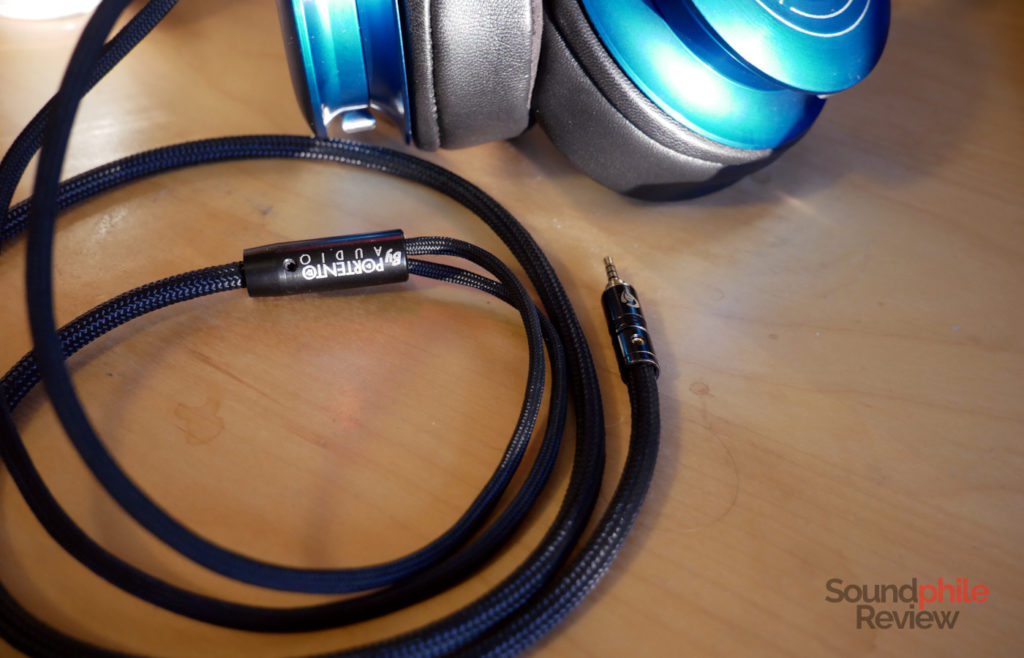 Another notable news is the presence of a removable cable. Spirit Torino partnered with Portento Audio, an Italian manufacturer of cables. The cable I got has a balanced 2.5 mm jack on one end (though almost any termination is selectable) and two 3.5 mm jacks on the other, with every part sleeved in fabric and with metallic housings on top of the jacks and the Y-split. It’s a really well-made cable, soft and seemingly very durable.

I tested the Spirit Torino Radiante with various sources. Among them are a Topping DX7 driving a Drop THX AAA 789 amplifier, a HiBy R5 and a Shanling M2X. Source files were mostly FLACs ripped from CDs (and therefore in 16 bit, 44.1 kHz).

The Spirit Torino Radiante use one dynamic driver made by South African Nhoord Audio. This is different from the two-driver configuration used in the Twin Pulse, but also understandable as the Radiante are smaller and meant to be portable. 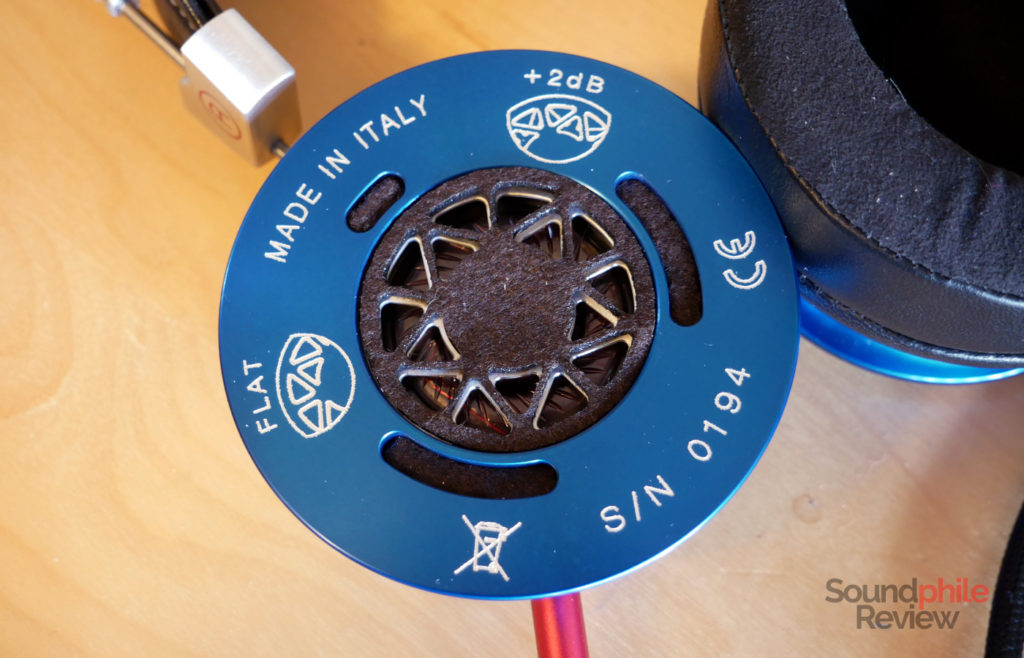 If one takes the earpads off a tuning system appears: it’s a layer of felt with holes in it and rotating it alters the way midrange is presented. Two configurations are possible: either non-blocking or blocking, with the latter having the spokes on the holes in the driver housing. I found the non-blocking one to sound best, as the other one places a larger emphasis on upper midrange making it sound bright and a bit off balance.

Despite being semi-closed, the Radiante offer a large soundstage which extends both in width and depth, giving you the impression of music being played in a large hall. Imaging is especially good as the central image is positioned in front of the listener most of the time, instead of between the ears. That’s quite an accomplishment and it is complemented by the instruments being placed with good precision on the stage. Instrument separation is also top-notch and one can easily pick instruments even in very complex tracks.

Just like all other Spirit Torino headphones, the Radiante have quite a unique take on tuning which highlights bass and sub-bass especially. This is because the tuning follows the equal loudness contours which describe how the human ear hears frequencies at the same volume when sound pressure is different among frequencies. In general, according to this theory bass appears to need more sound pressure to be perceived by the brain as being at the same volume as the other frequencies. As this boost in bass volume is not taken into account in recordings according to Spirit Torino, they say that it has then to be taken into account in the reproduction phase – so with headphones.

Bass is in fact highly prominent in the Radiante’s signature. It is not overpowering, but it is the predominant sound of the signature and sits above everything else in most recordings. It is sub-bass that’s the most prominent part, with peak volume around 30 Hz and a slight decrease at 20 Hz. This bass domination makes sound as a whole appear rather dark. Bass is large, relentless, rich, detailed and even aggressive at times. It’s a basshead’s wet dream. It hits with strength and gives you the same sensations of a live event. Tracks such as Sleep’s Dragonaut are amazing as they make you feel like you were just in front of the stage at a concert of the band. It’s massive. And in a good way, too: Spirit Torino says they wanted to achieve the impact of a live event and they definitely managed that! What’s most impressive is that despite being so preponderant, bass never becomes excessive. Let me explain that: excessive bass is when it becomes the only (or almost only) thing you can hear, when it leaks over mids and suffocates them. That’s not the case here. Bass stays well-controlled and lets midrange do its thing. It also offers great detail and layering, showing even smaller details – which is quite amazing.

Although bass does not leak over mids, midrange is affected by its presence anyway. And it is in the sense that it is really warm, with a larger presence in the lower area. I would say that it’s actually V-shaped, with the area at the border with treble also exhibiting some emphasis. It’s a bit recessed, but overall still perfectly audible and easy to reach – it doesn’t sound too distant. What’s amazing here is the level of detail: you can clearly hear smaller details such as the pick hitting the string in the introduction of Slayer’s South of Heaven. Or you can clearly hear the stick hitting the drums in that same track, and doing so with the correct speed and sensation of impact.

Treble is mostly in line with midrange in terms of volume, so it doesn’t end up forming the usual V with bass. It is quite detailed, with lots of micro-details popping up everywhere and giving more depth and complexity to cymbals, hi-hats and so on. It is remarkable how details pop out from the mix, even in complex tracks. Alas extension doesn’t appear to be on par and is a bit limited, leading to treble not sounding as airy and open as it could.

I listened to the Radiante side by side with the HiFiMAN Jade II and found them to compete in terms of technical ability: while the soundstage on the Jade II is larger, it is deeper on the Radiante, which also offer better imaging. This is a bit unexpected, but shows how the Radiante is an outstanding product.

The Spirit Torino Radiante offers many of the advantages of open-back headphones – large soundstage, fast bass, a sense of space beyond the ears – while also offering some isolation. They’re in fact semi-open, or semi-closed if you wish, and offer a good compromise between the two kinds of headphones. They are extremely well manufactured and offer a different approach to sound – a difference which is not for everyone, though. The very large bass presence, coupled with the  low comfort, make the Radiante a product for the few (together with the price, ça va sans dire). But in this niche positioning lies a very technically capable product that will surely satisfy the needs of those looking to recreate the physical feeling of a live performance.

But let’s be honest: they’re among the best I’ve found to listen to heavy metal. Was that the plan all along given they’re large chunks of aluminium?