Just when I thought that iFi was done with the old “micro” line-up, they come up with a new device that promises to make their best portable DAC and amplifier even better. The all-new iFi micro iDSD Signature is an evolution over the previous micro iDSD Black Label that introduces a small yet quite significant addition: a balanced headphone port. Most of what everyone (me included) loved about the Black Label is here as well, sometimes with improvements that make the Signature stand out.

Disclaimer: thank you to Karina at iFi for sending me a unit to review. The official website holds more information. 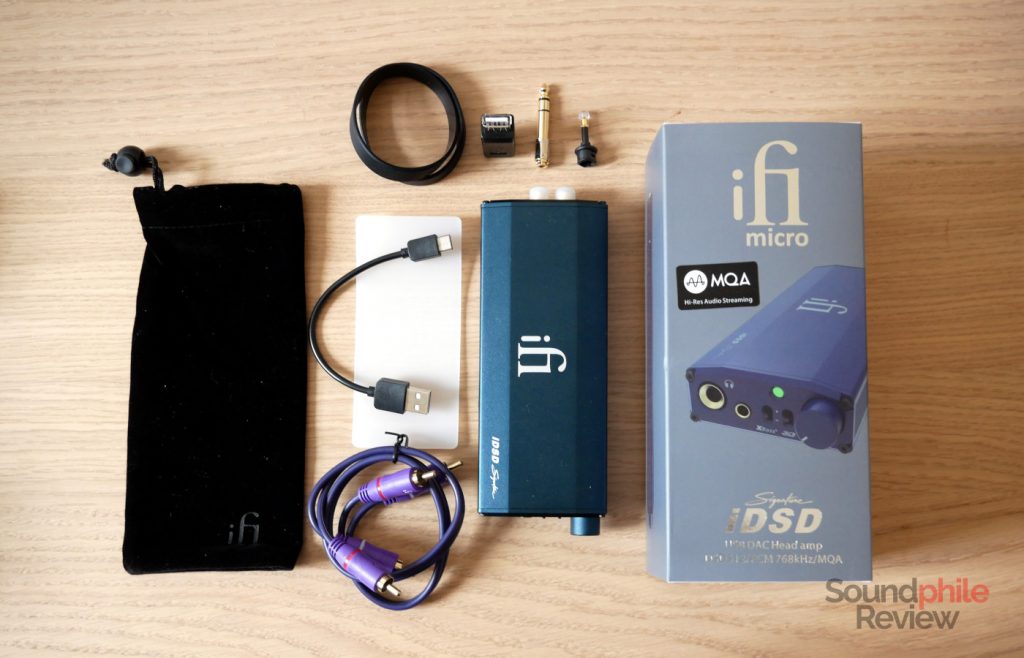 iFi kept the packaging identical, with the typical rectangular box shape. Inside the box are a USB 3 cable (with two A connectors, one male and one female), a USB-C cable to charge the device, a black fabric bag, an RCA cable and a manual. 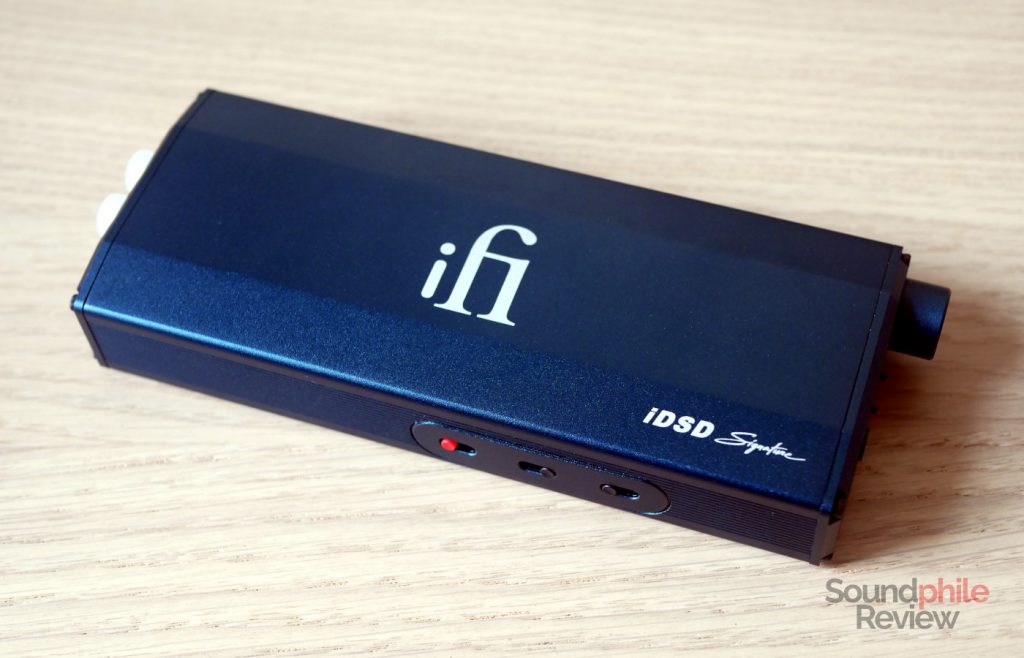 There’s not much to say on the iFi micro iDSD Signature that I haven’t already said about the Black Label as the two are identical in all respects, save for a few details. The first is the colour of the metal: it is now a dark blue, with text printed in white. The second is the front and the back: they don’t have the protrusions that characterised the BL, instead opting for  design that reminds me far more closely of the nano iDSD Black Label. The front also has a different arrangement due to the inclusion of a 4.4 mm jack port and a status LED, which are added to the 6.3 mm jack, the XBass+ and 3D+ switches, and the volume knob; the 3.5 mm input is gone. The third is that there is now a USB-C port on the side instead of the USB-A one, so charging the micro iDSD Signature should be easier now. The various switches that were on the bottom (power mode, filter, IEMatch) are now on the side so they’re easier to reach. A couple of switches, the preamplifier type and the polarity, are missing. 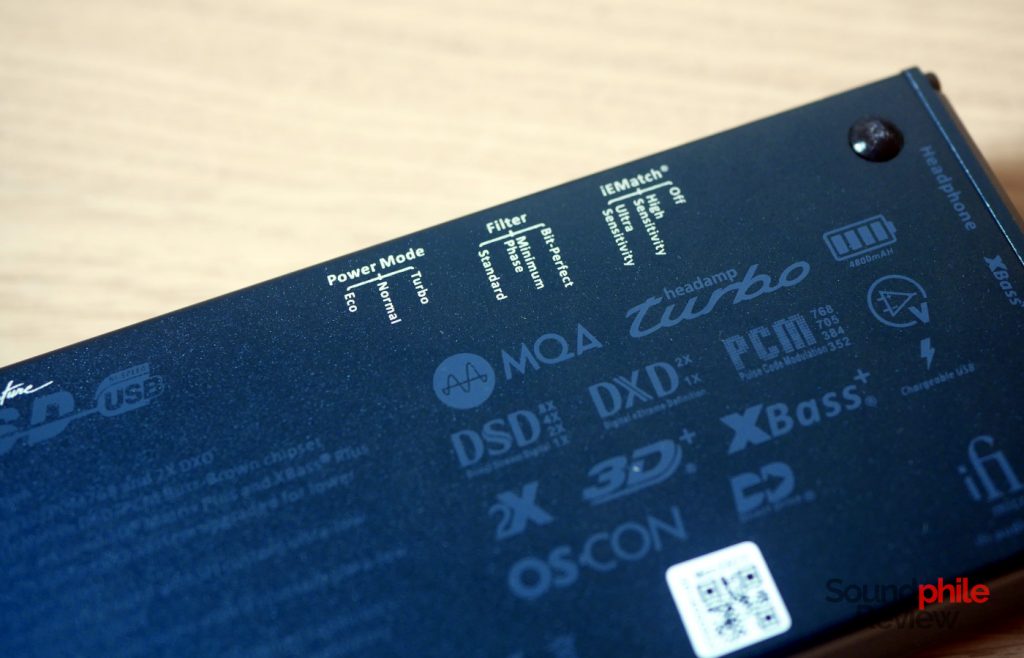 The micro iDSD Signature seems like a modernised, streamlined version of the Black Label. It has a couple of additional options, but it also loses a couple so there’s no definite answer as to what is better. If you wanted a device that could work as an amplifier only, for example, then the Black Label is better for you.

A very minor detail which I liked is that the Signature has built-in rubber feet. Those prevent the Signature from resting directly on the surface below it and from scratching it. 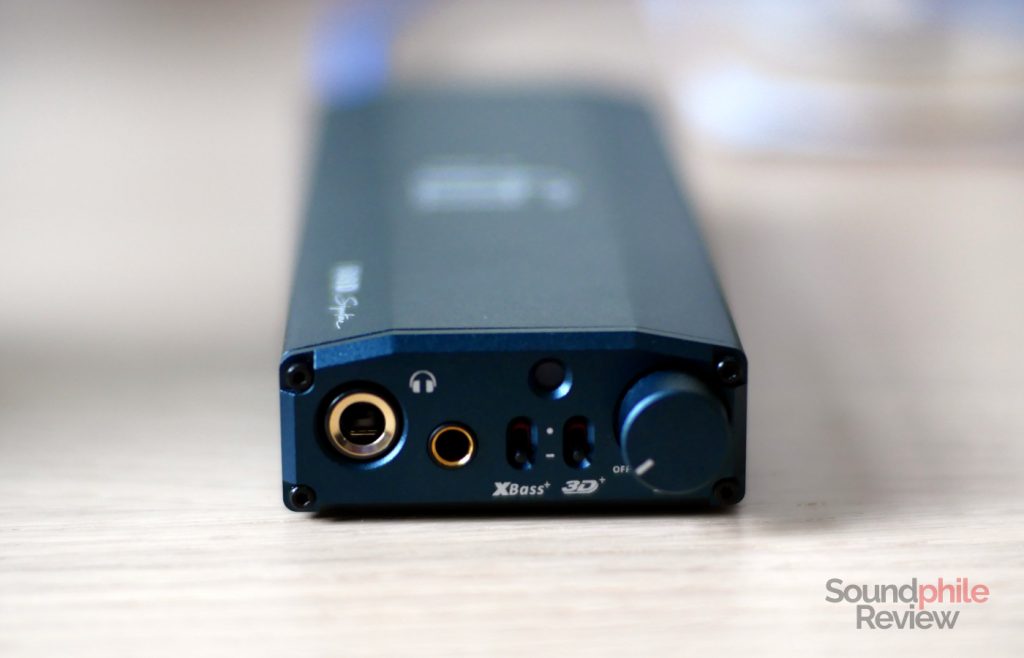 The knob offers some resistance to turning, so it has a “weight” that makes it possible to turn it with precision. It has quite a large “dead zone” in which no sound is produced even when using very sensitive earphones: it extends from its starting position around 7 o’clock up to 11 o’clock. It doubles as the power button, so once you turn it from its starting position it also powers the device up. 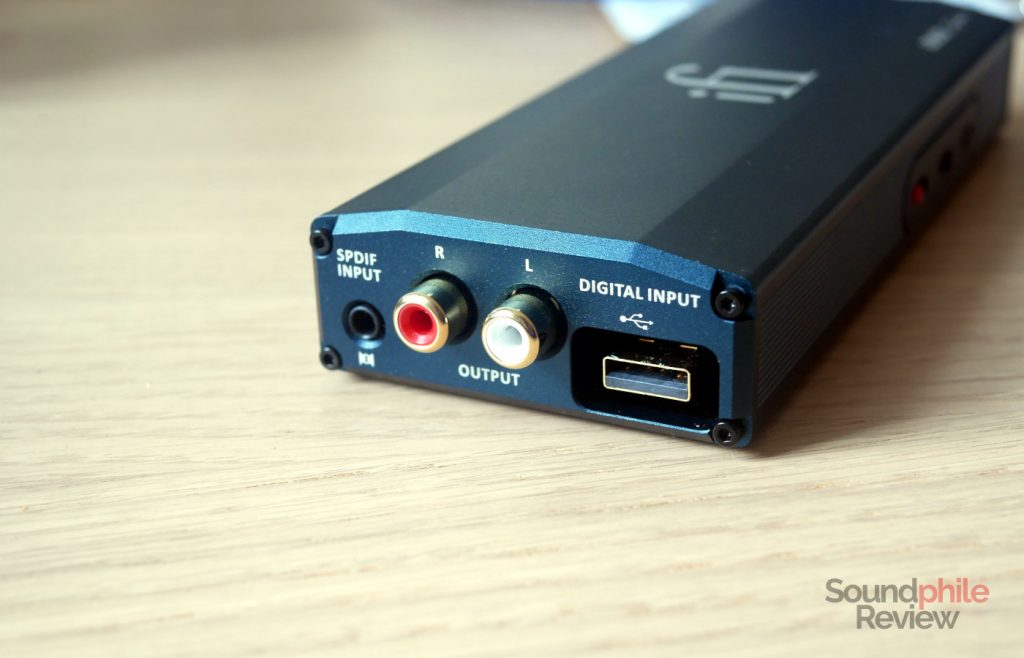 The iFi micro iDSD Signature trades the coaxial S/PDIF port for a 3.5 mm one, which doubles as an optical input. This lends the device added flexibility as you can use it with a huge number of sources that offer coaxial or optical but not USB (e.g. TVs, just to name the most common devices).

iFi embedded its IEMatch technology in the micro iDSD Signature, so that you can use lower-impedance earphones. It’s basically applying a lower gain (e.g. 0.5x) instead of a higher one. One thing to watch out for is that this alters the output impedance and makes it higher than it normally is, so you could actually want to have a real IEMatch device to keep the impedance low if you have earphones with especially low impedance.

Just like the Black Label, the Signature also has a somewhat loud “pop” sound when it is powered up or down. It is far quieter than the previous model, though, so there has been an improvement in that regard, but it’s still there. Honestly, I would expect it not to be present at all, given the price point of this thing. On the other hand, the one-second gap that was there on the Black Label is gone, thankfully, so the micro iDSD Signature is actually playing music as soon as you start playback. That’s quite an improvement over the previous device!

The largest news in terms of supported formats is MQA, which is now supported out of the box and requires no special firmware installation.

The micro iDSD Signature is identical to the micro iDSD Black Label from the standpoint of specs: it is built on the exact same foundation and offers the same output and specs down to the bit.

Just like all other iFi products, the micro iDSD Signature also uses Burr-Brown chips; unlike the Neo iDSD, though, it uses two DAC chips that produce a dual-mono signal which is then taken care of by a dual-mono amplification stage. This is not a “true” balanced design in the sense that there is no interleaving, it’s a double-mono design with a balanced connector. This means that you can get many of the benefits of balanced designs, but it could be noisier than a “true” balanced signal pathway.

Like its predecessors, the Signature offers three modes: “eco” (low-power), “normal” and “turbo”. If you’re wondering, yes: the micro iDSD Signature is more than enough to power the HiFiMAN HE6 SEv2. It has in fact loads of power more than is required to bring it to literally deafening levels: with just 700 mW those headphones get to 112 dB, which is enough to make you deaf in less than a minute, and the Signature is more than capable of delivering that power, given it outputs 1,560 mW of continuous power at 64 Ω (meaning that peak power output is even larger than that). You will probably become deaf if you push the device at full volume.

The micro iDSD Signature offers a full working day of usage in “normal” mode. In “eco” mode you can actually go throughout your whole day, if you exclude meals. That’s quite impressive, given the amount of power this thing dishes out! It also takes a while to charge: even using “high-powered” chargers (2 A @ 5 V) it still takes 3 hours. If you use a generic 0.5 A USB charger it takes 12 hours. Luckily most of today’s chargers are more than capable of offering 2 A.

That’s all good, but there’s also a problem: there is unfortunately no way to know how much battery is left, unless you look at the tiny little LED on the side near the USB-C port – though that’s not really practical. The micro iDSD Signature has no other indication that you’re running out of juice, so if you don’t realise in time you will just see the device power off and stop producing any sounds all of a sudden.

The battery also doesn’t charge if you simply connect the unit to a computer using its USB cable, like previous iDSD units did. This makes having a second cable almost mandatory if you are going to use the micro iDSD Signature as a desktop device.

I spent a good amount of time trying the iFi micro iDSD Signature with various headphones; among them are the Moondrop A8, the HiFiMAN HE-R10P, the Sennheiser HD 6XX and the Fearless Audio S10 Genie. Most source files stored on my computer were FLACs in 16 bit, 44.1 kHz resolution.

As far as I can tell, the micro iDSD Signature introduces no colouration to the sound. I switched back and forth between it and my Drop THX AAA 789 and I couldn’t hear any differences in tone, nor in resolution nor in technicalities. It’s dead neutral.

Keeping with its own tradition, iFi provided the micro iDSD Signature with the XBass+ effect: a bass boost which the company highlights as being entirely made in the analogue domain. It works quite well and adds a good oomph to the lower end. In fact it adds quite a substantial amount to the sub-bass section, diminishing it as the frequency goes up. The effect is quite good as it adds some kick to the sound, but it doesn’t make bass become overbearing. Among bass boost implementations I’ve heard, this is one of the finest.

3D+ is the soundstage enlargement tech iFi developed. It makes soundstage much wider by giving more emphasis to frequencies in the upper midrange and lower treble region and the effect is quite astonishing – one moment you are in your own room, the next you are in a concert hall. While it doesn’t fix depth, the width increases significantly. It’s not perfect, as you can hear that there is a change in tone, but it’s extremely fun.

The filter switch allows you to choose between bit-perfect, minimum phase and standard. The difference, if it’s there, is so small you can’t really hear it. Even with the S10 Genie, which has very low impedance and high sensitivity plus an astonishing ability to render detail, I can’t hear any difference between them.

Although I’ve already spread bits and pieces of this comparison throughout the review, I’m going to do a more thorough comparison of the micro iDSD Signature and micro iDSD Black Label. The largest differences are:

Everything else is the exact same in all regards that matter.

Much to my surprise, there is a slight sonic difference between the two devices. I expected them to be 100% identical, so you may say that I started comparing them with a bias, but that turned out not to be the case. The Black Label is in fact a tiny bit warmer than the Signature! It sounds fuller and with better extension in the sub-bass section, whereas the Signature appears slightly more resolving. It’s a very subtle difference, yet it’s noticeable.

The Signature is not a perfect replacement of the Black Label, so if you are in doubt over what to buy you should think about what features you need the most or if there is any blocking issue with any of the two. Also, if you already have the Black Label, don’t think of the Signature as an upgrade: it’s a different beast that does different things and it’s not a drop-in replacement.

The truth is that, however you look at it, iFi’s micro iDSD line has virtually no competition. No other portable device in this size and price class can shell out as much power while boasting a comparable battery life and with similar accessory features. This is really the Ferrari of portable DACs – and you pay for that, but it’s a fair price for the features, a bit like Ferrari cars. The streamlined design, the great build quality, the large amount of options and the incredibly high power output all concur to making the micro iDSD Signature a great device, possibly the best portable DAC/amp under $1000. It’s an option you should definitely consider if you want a device to power all of your headphones at the desk as well as everywhere you take it.