Genies, or djinns, are mythical creatures that come from the Arab tradition. In the Western world they’re mostly famous as being confined in lamps and for granting three wishes to those that let them out. The Fearless Audio S10 Genie are not confined in a lamp, but in in-ear headphones that grant one wish only: high audio quality. And they do so spectacularly well!

Disclaimer: this sample comes courtesy of Linsoul Audio, who provided it for free. They sell it on their website at $724.

Alas Fearless Audio does not really scale up the accessories with the price. In fact the S10 Genie has the same accessories as the Crystal Pearl, despite costing more than three times as much. The accessory set is decent (a case covered in faux leather, a metal plate with information on the specific unit and a set of three dual-density silicone tips), but it could actually be better: a few additional eartips and a better case would have been appreciated. 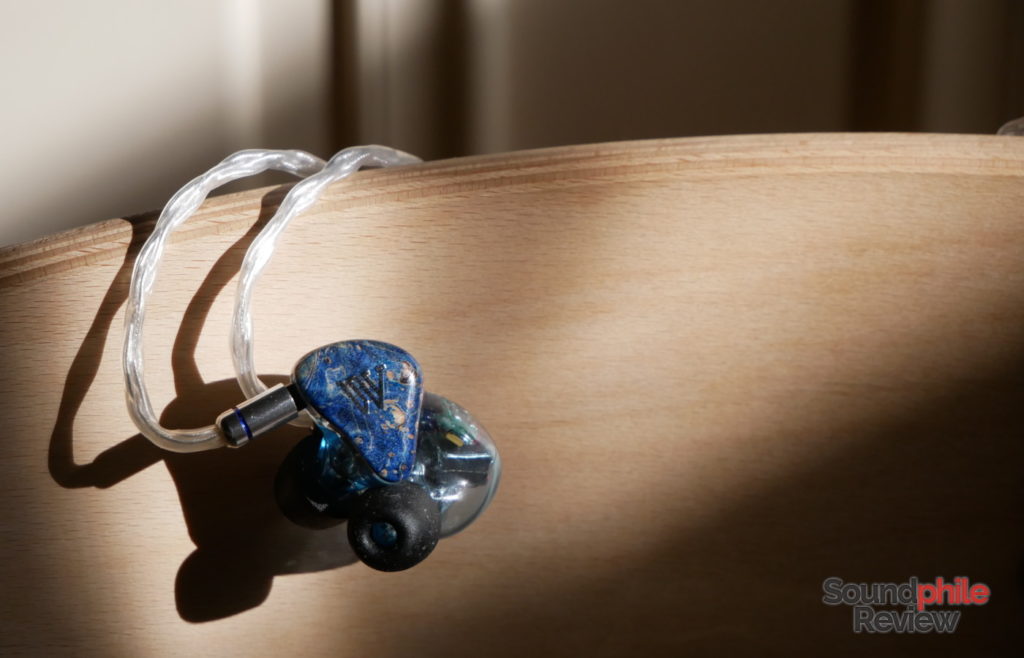 There’s not much new in terms of the physical aspect when comparing the S10 Genie to the S8 Pro: the only difference is that the S10 Genie are a bit bulkier due to the two additional drivers inside the housings, so they are slightly less comfortable on the (very) long term. I can still wear them for more than three hours without issues. I encourage you to read the Fearless Audio S8 Pro for more details as everything written there stays true.

Isolation is fantastic, to the point I just leave the S10 Genie on even if I am not listening to music when I am in crowded environments, as they acts as earplugs. They’re really exceptional at shielding from external sounds.

In order to write this review I used a few sources: a Topping DX7 while at the desk, and a Shanling M2X and an xDuoo X10T II with an xDuoo XD-10 Poke while on the move. Source files were mostly FLACs in 16 bit / 44.1 kHz.

Luckily the Fearless Audio S10 Genie aren’t too fussy in terms of sources. They sound perfectly well with almost everything you connect them to. The only exception is when you use a source with high output impedance: in that case the S10 Genie’s bass becomes a bit bloated. On the other hand, though, the low impedance and relatively high sensitivity of the S10 Genie make them easy to drive, so they do not require any amplification. Just a DAP (or even a phone!) are more than adequate to drive them to their full potential.

It’s especially interesting how the Fearless Audio S10 Genie is able to deliver minute details and how this is related not only to the superb control over the drivers, but also to the incredibly large dynamic range. The S10 Genie are in fact able to deliver a huge range, so much so that I was able to hear things I normally don’t hear even though I kept volume reasonably low. As a practical example, in Judas Priest’s Judas Is Rising the riff at the beginning of the song rises up in volume from complete silence and I realised that it is there since the very beginning. It’s just so faint almost every other IEM I’ve tried wasn’t able to display it as clearly. That’s also true with micro-details in a recording of Ravel’s Bolero (a recording of the Saint Louis Symphony Orchestra directed by Leonard Slatkin).

Soundstage is wide and it has some depth; despite this, the sound appears as if it was produced inside a large room and not in a wide concert hall. They still sound like closed-back IEMs, although they are closer to open-backs than most closed-backs. Imaging is extremely good and instruments are placed in a precise spot on the stage with great accuracy. Instrument separation is great: although one does not have the impression that each instrument is playing on its own, there is very good separation that lets one easily tell each one apart from the others.

The sound as a whole is a bit bright, as there is a tad of emphasis on upper midrange and treble. We might say it is analytical, though it is never boring or flat or dull. On the contrary, it is actually lively, vivid and engaging.

Bass is limited in terms of presence: although it goes down to about 30 Hz, it is generally restrained and almost shy. I would say that it is just south of neutrality, more so when going down with frequency. Despite this it is actually present in the mix and easy to hear, though it has to be noted that it is bolder at higher volume levels and shier at low volume. It has great texture, with lots of details and even micro-details that emerge clearly from the mix even in crowded tracks. The use of balanced armatures means that bass is not much physical, but it is actually really fast: the large amount of details is related with the ability of the drivers to render fast transients with great accuracy. I wrote that they’re not much physical because there is in fact a bit of physicality, though it’s just a bit – it’s nowhere near what dynamic drivers can achieve.

Midrange is not perfectly neutral in tonality: it does in fact have a bit of added emphasis on the upper area which makes it slightly brighter and more vivid. This emphasis is however limited and in my view takes nothing away from the overall great balance; if anything, it adds a bit of liveliness to the sound, especially with voices, electric guitars and wind instruments. It’s not enough for me to describe midrange as “bright”, as the thing is that it’s lower midrange that’s less present (though it’s the complementary fact, of course). Both male and female voices are rendered with a natural tone: they sound close to real voices, without pronounced sibilance or odd tonality deviations. They are downright amiable. The same applies to acoustic guitars, pianos, and basically anything you can throw at the S10 Genie. Detail is especially impressive, with the smallest details that pop out clearly as if they were macroscopic (but they aren’t in any way!). One such example is the piano at the beginning of Echoes by Pink Floyd: one can hear the key being struck and the cord vibrating inside the piano while the sound fades. I can almost see the piano being played! Transients are fast and accurate, and percussion and plucked instruments sound fast and superbly well controlled.

If I had to point at the single most impressive thing in the Fearless Audio S10 Genie that would be detail (as the title of the review suggests), but that’s especially true for the treble area. Treble is well extended, though this never results in it being fatiguing or aggressive; on the contrary, it is airy and open-sounding and the absence of spikes makes it easy on the ears. It may be a bit too emphasised for the sensitive folks, though I would say that it’s just north of neutrality. The S10 Genie are able to render it with an incredible amount of detail and especially micro-detail, which make this area complex and full.

I decided to compare the S10 Genie against some similar earphones that I’ve reviewed in the past:

The Fearless Audio S10 Genie allowed me to truly immerse into a few tracks I knew by heart and discover them again. I did not expect them to be able to do so, especially since they’re tracks I’ve been listening on systems worth tens of thousands of Euros for years now. But they have this insane ability of rendering the smallest details that really gives music a totally new look. They are not always enjoyable to me as sometimes I wish they had a bit more bass and lower midrange, but that’s my personal preference. They are some of the most technically accomplished IEMs I’ve ever tried, including ones that cost two times as much. They may not be perfect on the tuning side, but if you are looking for superbly technical earphones they won’t ever let you down, whatever you try to throw at them.

Also, the S10 Genie will make it to Soundphile Review’s Best earphones page!