Atop the line-up of IEMs by Chinese manufacturer Toneking sits the Toneking T88K, a behemoth with eight balanced armatures inside its resin body. The T88K is fairly large and stands out of the crowd not only thanks to its size, but also thanks to its peculiar design. But that’s not all – the

Disclaimer: this sample does not need to be returned and was provided by Linsoul Audio without me having to pay anything. The Toneking T88K are on sale on Amazon at ~$400.

The Toneking T88K comes in a relatively anonymous black cardboard box with a window made of transparent plastic which exposes the earphones inside it. In addition to the earphones and the cable, the box holds a metal case, a cable clip and a plastic bag with a lot of eartips: there are three pairs of white-and-red dual-density silicone tips, three pairs of grey-and-red dual-density silicone tips and two pairs of foam eartips.

You can see the pictures of the packaging and the accessories in the related Headphones in Pictures article. 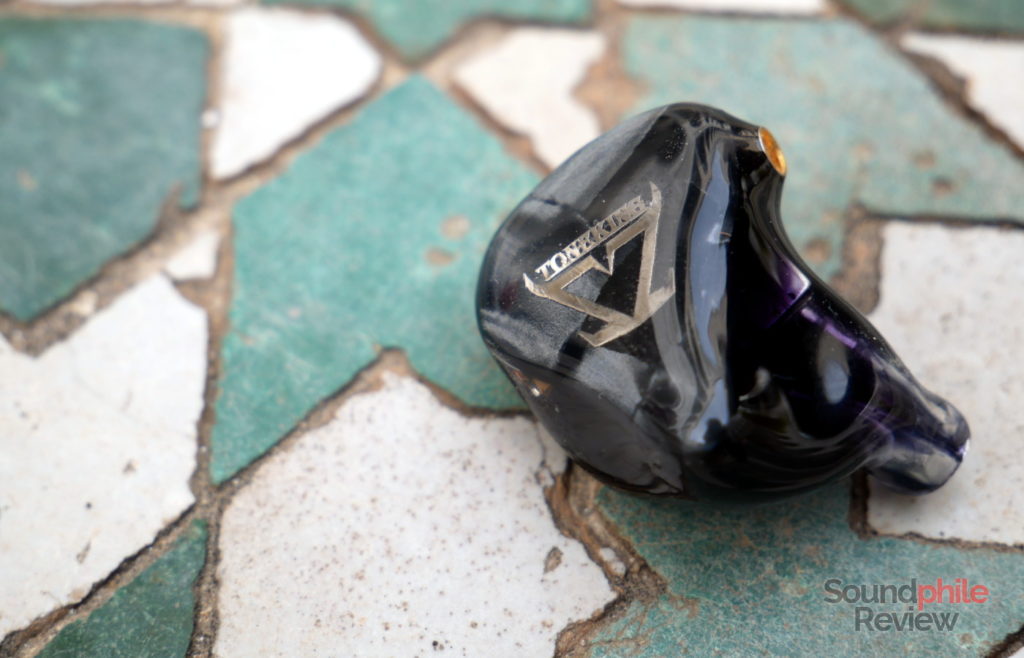 “Innovation” is not exactly what I first thought of when I first saw the design of the Toneking T88K, but the earphones are actually quite good from a design perspective. There’s no need to reinvent the wheel since it works quite well, so Toneking stuck with what works: a triangular shape with a nozzle and a “horn” on the inside that should make the shells more ergonomic. Shape aside, the Toneking T88K are entirely made with resin: in the case of the unit I received, the body is made of semi-transparent (though still largely matte) black resin, with a faceplate made of transparent resin. The faceplate shows the Toneking logo cut out of a metal sheet and a background made with specks of silver-coloured material. 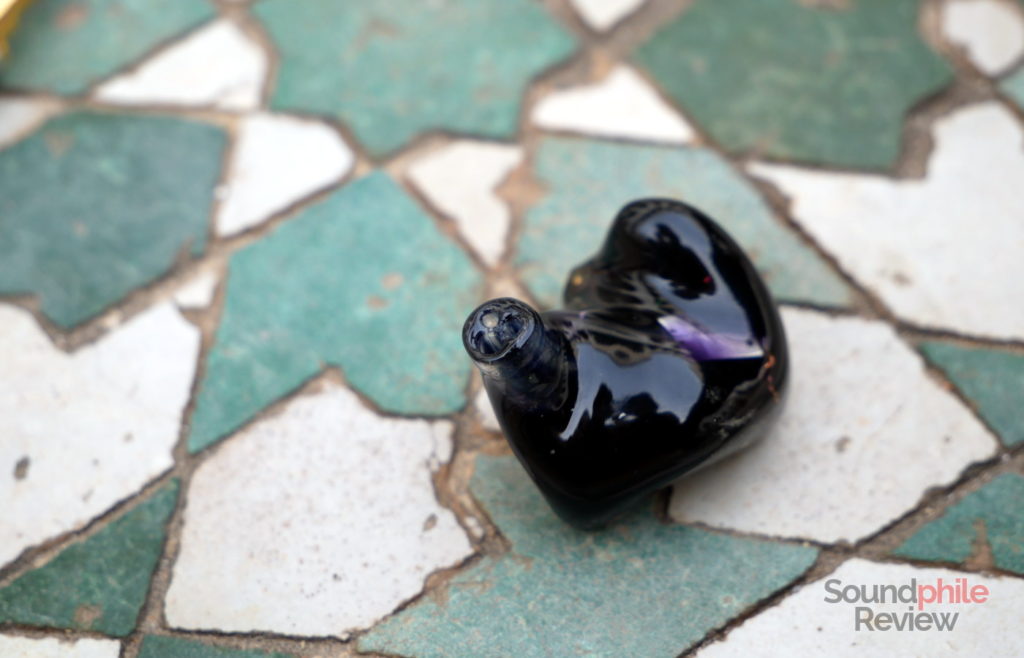 The Toneking T88K are huge. The shells are much larger than the average in-ear headphones and tend to stick out of the ear. They are so large they actually don’t fit inside my ears, which is quite exceptional – they are in fact the first earphones to do so. The company had to reach a compromise when designing the earphones: either putting eight balanced armatures inside the shells and making them large, or reducing the number of drivers and make the shells smaller. They decided to follow the first route, while the result of the second one is the Toneking T4 (which is practically identical to the T88K from a design perspective). 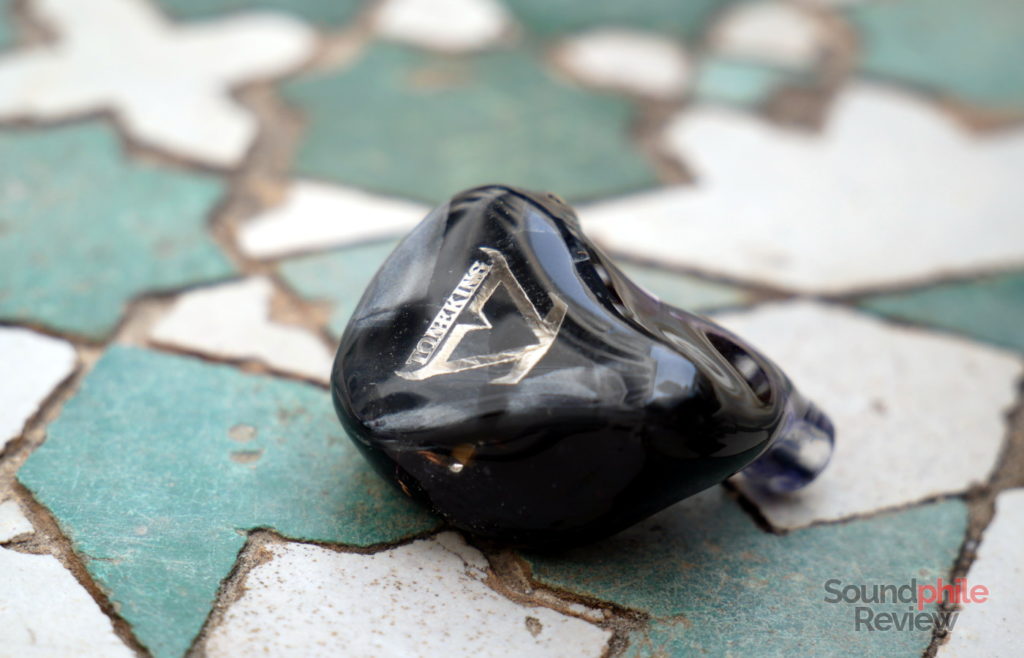 Comfort is hardly the best quality of the Toneking T88K. Although they’re shaped to offer good comfort thanks to their ergonomic shape, but that may actually be against the intended purpose. The “horns” that should make the shells adapt to the shape of the ears can in fact be too large or in the wrong position to effectively improve the comfort and, on the contrary, be detrimental to it. That’s the case to me, at least for the right ear (the left one seems to better cope with this large thing being stuck in it). My considerations come from my personal experience, so the results may be largely different in your case – please keep this in mind as each one has different ears with different shapes. 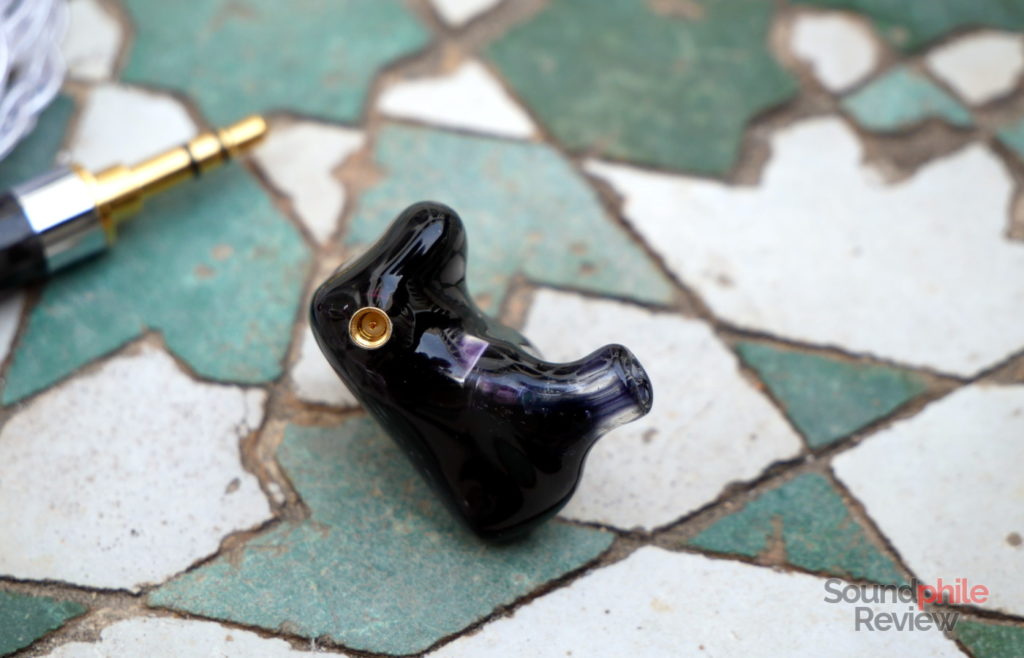 Contrary to my expectations, the Toneking T88K are very good at isolation. While they won’t be able to completely remove every and any background sound, they are really effective in blocking enough sound from entering so as to allow the listener to keep the volume low. Even on a (very) crowded train I was able to listen to music at low volume without hearing much of what was going on around me. On another, older train that made quite a lot of noise I could always hear the constant loud vibration caused by wheels on the rails, but the volume was much lower than without  wearing the earphones.

The soft cable included with the Toneking T88K has eight strands (or cores) weaved together, separated in two groups of four after the Y-split. The copper cores are completely covered in silver, so the cable actually seems to be made of silver. All the cylinders on the cable (the one containing the 3.5 mm jack, the one at the Y-split, those near the 2-pin connectors) are made of metal and there is a plastic ball that acts as the chin slider. All in all it’s a very nice cable and it’s even more remarkable as it comes as the stock cable.

I listened to the Toneking T88K using various sources, including the Shanling M2X, the xDuoo X3 II, the iFi nano iDSD BL and a Topping D30 feeding a Venture Electronics RunAbout 2.0bl. I used FLACs, largely in standard resolution, as source files.

Due to their very low impedance and high sensitivity, the Toneking T88K do not need any amplification in order to sound good. They can be powered directly from DAPs or other (relatively) low-output power sources. On the other hand, the very same low impedance and high sensitivity may mean that using an attenuator such as the iFi Ear Buddy is necessary to suppress background noise.

As I already mentioned, the Toneking T88K hide eight balanced armatures inside their shells. This configuration is not overly common, especially because of the high cost of production linked to the high number of drivers, but multiple drivers are becoming more common and more affordable now.

Given the use of multiple balanced armatures (and the price bracket they’re in…) I expected the T88K to have at least good technical ability. They did not let me down by any means, as they display great technical prowess. They surprised me with the width of their soundstage: in fact they sound much wider (and larger in general) than the usual closed-back in-ear headphones, presenting the listener with a wide space that resembles more that of open-back headphones than that of IEMs. More than once I found myself checking if the sound was coming from the speakers on my desk. That’s exceptional in itself, but it is complemented by equally great imaging that places instruments on the stage with superb accuracy – it often feels like each instruments has its precise place in the mix, with a great sense of layering too. Instrument separation is as good as I expected it to be, if not even better; it is always easy to distinguish each instrument and to hear its finer details, irrespective of how intricate the track is – an amazing achievement.

Generally speaking, the Toneking T88K have neutral tuning with slight emphasis on bass and treble; that emphasis is however really limited and only adds a bit of engagement to the sound without taking anything away from it.

Bass is remarkable on its own, but even more so considering it comes from balanced armatures. Not only is bass relatively deep, it is also almost physical as if it came from a dynamic driver. I can tell that it is not dynamic bass, but the difference is so small this can be actually fun – how many balanced armatures-based earphones are out there that can make the same claim? Bass reaches down to 40 Hz, and it peaks around 55 Hz; it is then roughly linear with small ups and downs. As I wrote it is very slightly emphasised, but this emphasis actually never turns into bass leaking over mids; on the opposite, it always stays under control and it never feels overbearing. It is, just as one would expect from balanced armatures bass, very fast and with relatively fast decay, even though decay is slow enough not to make the bass feel dry. Detail is portrayed with superb accuracy: I can hear minute details even in complex, layered tracks.

Midrange sounds like it’s the centre around which everything else rotates. It’s front and centre in the signature and it almost pops out, although it is not as emphasised as bass and treble. I can’t hear any emphasis nor dips in any part of the range: it really sounds flat, but this flatness makes it coherent and pleasing. Both male and female voices sound good, as well as almost any kind of instrument I’ve thrown at it. It is also completely devoid of any sibilance: listening to Giorgio by Moroder by Daft Punk, Moroder’s speech appears really lifelike with no sibilance at all. The level of detail is really high and conveys even minute details to the listener, so one always has a very clear picture of the various instruments being played down to small things like the plectrum being strung on the guitar strings. Midrange really feels fast, with drums and other impact-based instruments sounding vivid and fast.

Treble emphasis happens in the lower part of the range, so treble sounds a bit “warm”. Luckily, though, it has great extension that offsets this warmth a bit and makes treble airy and wide. I ascribe the large soundstage to treble extension, at least in part. Treble is really finely detailed, to the point it almost sounds excessively detailed: treble-sensitive people will find it almost harsh as it really delivers a whole lot of details that fill the soundscape. This level of detail is however admirable and a real treat.

I would say that the Toneking T88K makes for a great all-rounder: it is in fact pretty accurate in its tuning, but it also has enough “fun” elements to be appealing even to those who want a bit more engagement from their gear.

Here’s a comparison with other similar IEMs:

I’m really enthusiastic about the Toneking T88K: they really sounds like one of the best IEMs under $500, and they can probably compete with products that cost up to $600. Their accuracy is impressive, whether in terms of tuning or detail, and their technical ability is outstanding even when factoring the price in. They have wonderful bass not only by balanced armatures standard, but from any perspective. They can cater to those who prefer neutral, tame products, but they have enough energy to sound fun. I’m stoked.