Fearless Audio seems to have a lot going on at the moment, with the launch of a full line-up of products spanning the whole price range from top to bottom. Around the mid of that range stand the Fearless Audio S8 Pro, which are IEMs dedicated to professionals in the audio industry (as the name implies): their eight balanced armatures per channel with a neutral frequency response make them an interesting proposition for anyone who is looking for a reliable monitor. That, of course, doesn’t make them less interesting to those looking for earphones with superb technical ability and a balanced frequency response.

Disclaimer: this sample comes from Linsoul Audio and doesn’t need to be returned. They sell the Fearless Audio S8 Pro on their website and on Amazon at $549.

Fearless Audio really doesn’t skimp on accessories. The box includes a large hard case made of blue faux leather, which holds a plaque with information on the unit (serial number, person who assembled it, date of production). There’s a small set of four pairs of two-tone silicone eartips. There are not as many accessories as in the box of Fearless Audio S6 RUI, but it’s still a very good set. You can find the pictures in the Headphones in Pictures article.

The Fearless Audio S8 Pro are really similar to the Fearless Audio S6 RUI in terms of general design. The only significant difference is the fact that they’re deeper: the shells are taller than those of the S6 RUI, so they stick out of the ears a bit more. This has an (unexpected) impact on comfort, too. The shells are made of a single plastic piece, including the faceplate. In my case, that is made of stabilised (and coloured?) wood made on order. It looks completely different from anything else I’ve ever seen – there are subtle nuances of blue alternated with sudden spots of yellow. It looks like wood, but in a quite unfamiliar way when it comes to colour. They really stand apart from other earphones.

The shells are made of blueish plastic, while the plastic covering the faceplate is completely transparent. This differentiates them from the S6 RUI I previously tried in that they had completely transparent shells. The nozzle is part of the shell itself, with three sound bores each delivering a different part of sound (bass, midrange and treble by the looks of it). This makes the Fearless Audio S8 Pro look like they are a whole, rather than a sum of individual parts.

I came to expect great build quality of Fearless Audio and they really deliver in this regard. The S8 Pro are really well built as there are no seams or imperfections; on top of that, the resin they’re made of appears quite resistant. The use of 2-pin connectors should also grant them a long life. 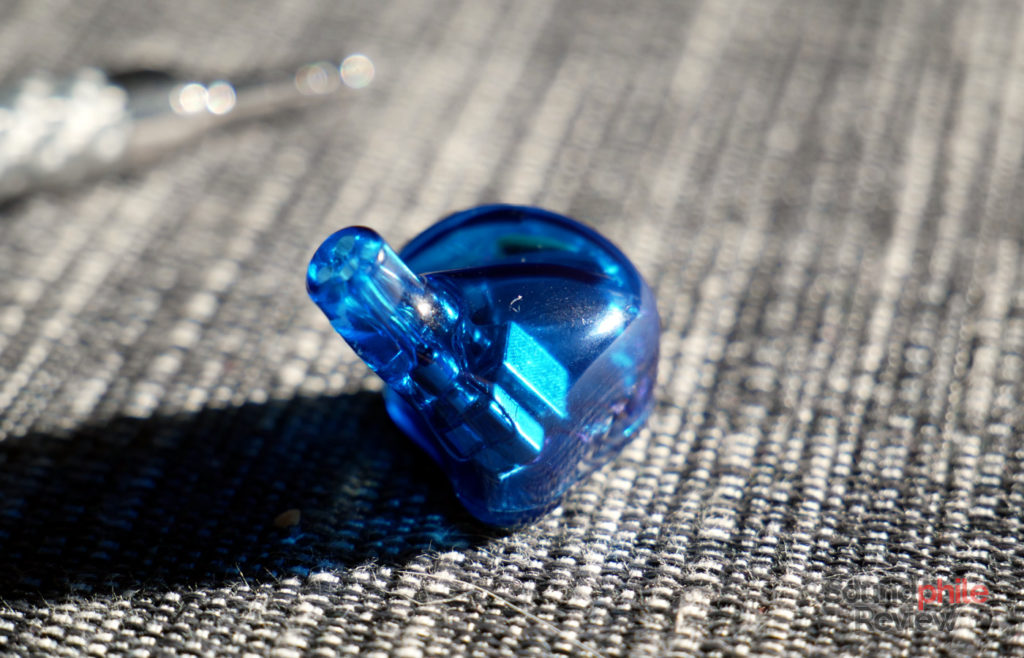 Comfort is not as good as the S6 RUI, at least in my experience. The larger shells have a significant impact on comfort and make the S8 Pro less comfortable on the long run, as they tend to press against the ears more. On top of that, the cable tends to get in the way more – more on that later. All in all they are definitely not uncomfortable, but they’re not among those earphones one can forget they’re wearing them. Please take my word with a pinch of salt as comfort is a deeply personal matter. The large shell may be an issue to many people though, as I have decently large ears and they still do become an issue with time. 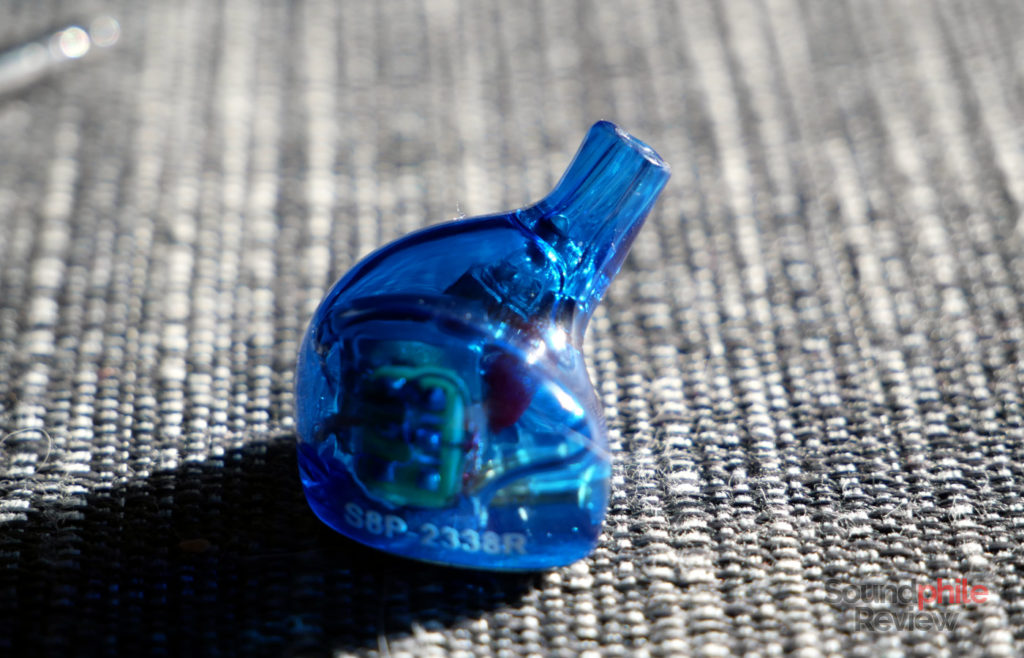 Isolation is exceptional and comparable to the best isolating earphones out there. They’re effective at reducing noise on practically the whole spectrum, so in a sense they’re even more effective than noise cancelling headphones. Wearing them on a flight I could barely hear anything from my surroundings – even the loud noise of jet engines was largely reduced. I find the Fearless Audio S8 Pro ideal when it comes to passive isolation, so their “Pro” moniker seems to be justified for live performances where you want to concentrate on what you are monitoring. 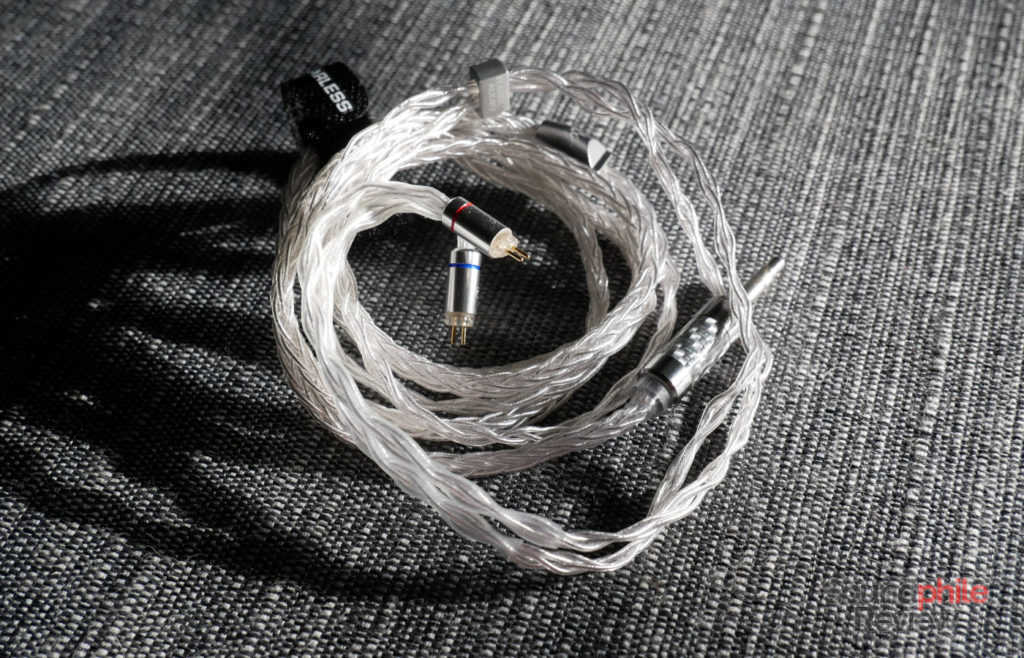 The cable is almost the same as the one included with the S6 RUI except for a few details: there is a chin slider which is made of metal and the Y-split is a bit bigger (and still made of metal). There’s also a Velcro strap to keep the cable tidy even when the earphones are not actively in use. The cable itself is made of eight cores and is plated in silver, so it looks completely silvery in colour. It is really soft, almost as much as the Yinyoo 8-core SPC cable. It is alas a bit heavy, too, and it tends to press against the top of the ears with significant enough force to cause discomfort after a while.

As the name suggests, the Fearless Audio S8 Pro use eight balanced armatures per channel. They use a mix of Knowles and Sonion armatures: there’s a four-way crossover distributing the signal to one dual Sonion bass driver, one Sonion dual low-mid driver, two Knowles mid-high driver and one dual Knowles treble driver. The S8 Pro have low impedance and high sensitivity, a mix which only creates issues if you use sources and amplifiers with high output impedance (e.g. Topping A30) but that, on the other hand, allows one to drive the earphones with practically any source out there.

The overall sound signature leans towards neutrality, although it has a slight boost in both bass and treble. I would call this more of a “live performance neutral” than a “studio/mixing neutral” – there is a very slight emphasis on bass and treble that offsets the usual emphasis on both areas that are present in (amplified) live music. They are very well balanced without any noticeable peaks or dips. Despite this neutrality, the Fearless Audio S8 Pro never sound flat (pejoratively) nor boring and, on the contrary, they sound vivid and involving.

Soundstage is wide and, more importantly, deep: it gives the listener a three-dimensional impression of what’s going on in the recording, so although width is not extreme (it doesn’t sound like they are open-back) the music sounds spacious. Imaging is accurate as it places instruments on the stage allowing one to hear where the sound is coming from, but it’s not a pinpoint-like accuracy. Instrument separation is great as it makes every instrument come out of the mix clearly even in crowded situations.

Bass is almost exactly as one would expect bass out of balanced armatures to sound: not physical but really fast and well controlled. The lack of physicality is especially important when it comes to sub-bass: it only reaches down to about 50 Hz with good presence and strength, and then it is less and less felt down to 20 Hz. It’s still audible down there, but this lack of physicality makes sub-bass appear less present and noticeable despite actually being there. The otherwise almost perfect flatness of bass makes it sit in the right place and sound just as it should. It is just a bit more abundant than what perfect neutrality would entail, but the emphasis is so minimal it is barely noticeable. In terms of quality, lows are fast and accurate in representing transients, with a whole host of details that display the texture clearly.

Midrange is accurate and natural, with voices sounding natural and coherent with the right tone. If I had to point out anything in tuning, I would say there’s a bit of accent on the top area of midrange. The mids are otherwise really well balanced and very close to neutrality. As a whole, the midrange is really pleasing in its tuning – never boring despite its neutrality. The placement in the mix is just right, and instruments are clearly audible without being pushed to the front aggressively. There are lots of details here too and they give depth to this area by making every instrument stand on its own. All this detail means that everything is exposed, both in good and bad: bad recordings are immediately apparent as such. Overall, mids are really pleasant and easy to listen to, even though they tend to expose bad recordings immediately – and that may be a bad surprise if the recording is one of your favourite tunes!

Treble really sparkles and shines in the mix. It is a bit further forward than what one would expect in perfect neutrality, but the difference is small (though not negligible). It may appear a bit aggressive in the upper range to the treble-sensitive folks due to its large extension and slow roll-off. In fact it is this same extension that makes treble more noticeable, but also more sparkling and airy. Detail is superb, so much so that it sometimes becomes fatiguing because it’s difficult to keep up with all the information that’s being delivered. It really stands apart in terms of refinement.

Here’s a selection of earphones against which I’m going to compare the Fearless Audio S8 Pro:

I won’t deny that I had positive thoughts about the Fearless Audio S8 Pro even before I had started trying it out. Why? Because I had big expectations of them, after trying the S6 RUI. Expectations are a sharp tool, however, as not meeting them may cause disappointments that are difficult to overcome. Well, I was excited to try them out because I thought that they had to be somehow better than the S6 RUI, and… that is true, in a sense. The S8 Pro are a very different beast from the S6 RUI, as they are quite less coloured, yet they are really pleasant to listen to. They achieve a level of detail that’s intense and their overall presentation of music is something to drool over. I’m not exaggerating: they are good. So if you are on the fence on whether to get them – go on and do it. You’ll be happier. Thank me later.