The constant evolution we see in the in-ear headphones space happens at very fast speeds – it’s so fast it’s hard to keep track of everything. Some products leave a mark on the market, though, and the expectations on their successors are great. That’s the case at hand: the BGVP DM7 are heirs to the much-loved DM6, which have received appraisal from both critics and public. The hype on the DM7 is huge. And, at least to some extent, it’s real.

Disclaimer: I received this complimentary sample from Linsoul Audio. The BGVP DM7 launch on Linsoul’s website and on Drop on May 6th at $299.

Update: the rating has been adjusted from 9.5 to 9 to better reflect what the earphones offer compared to the new stuff on the market.

As I detailed in the related Headphones in Pictures article, the BGVP DM7 come with a set of accessories that includes three pairs of silicone tips, three pairs of dual-density silicone tips and one pair of foam tips. Alas there is no case nor is there any cable clip. 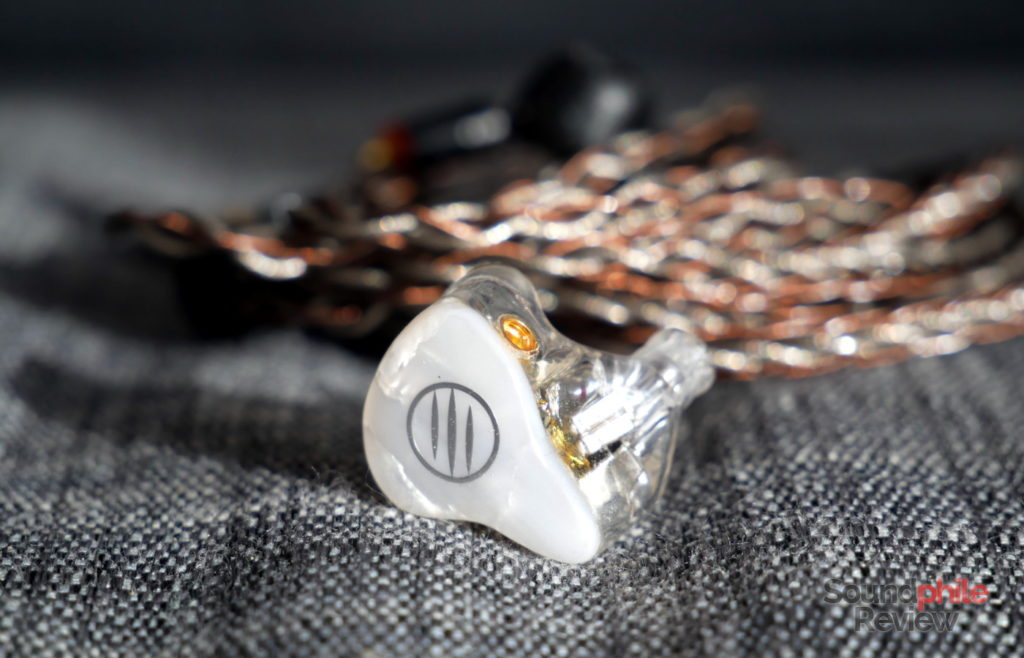 Never change something that works, right? That seems to be the thought behind the choice of BGVP, who did not alter the design of the shells when designing the DM7. They are basically identical to the DM6, save for the fact that – at least in the case of my unit – the faceplate does not have the same colour as the rest of the shell. The shell is in fact transparent, while the faceplate is coloured so that it almost looks like mother-of-pearl. The shape the same as the previous model: slightly triangular, with a pointy end that should improve comfort. 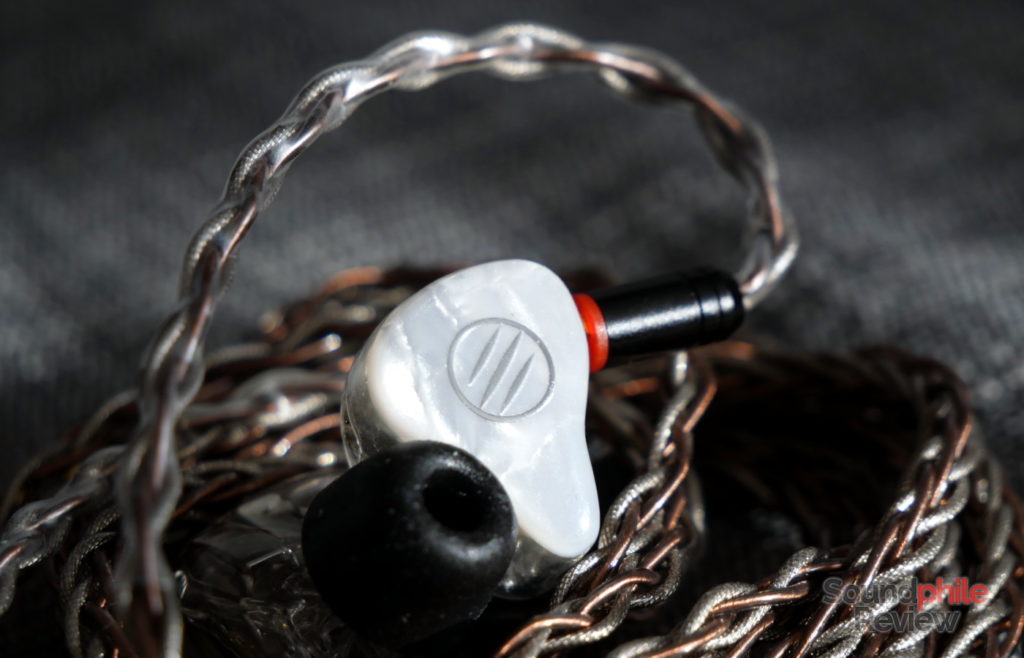 BGVP claims they use a German-made resin that is normally used for medical applications. This resin is then fed to a 3D printer that prints the shells. The company also claims the shape of the shells was engineered thanks to a collaboration with Siemens, who provided access to a database with over 10 millions ears. I guess they did for the DM6, too, as the shells are completely identical. The only notable difference is the fact that there are now four sound tubes (or channels, or bores: they seem to have a lot of names) that separate the output of the balanced drivers into four groups. The balanced armatures themselves are encased in the resin. 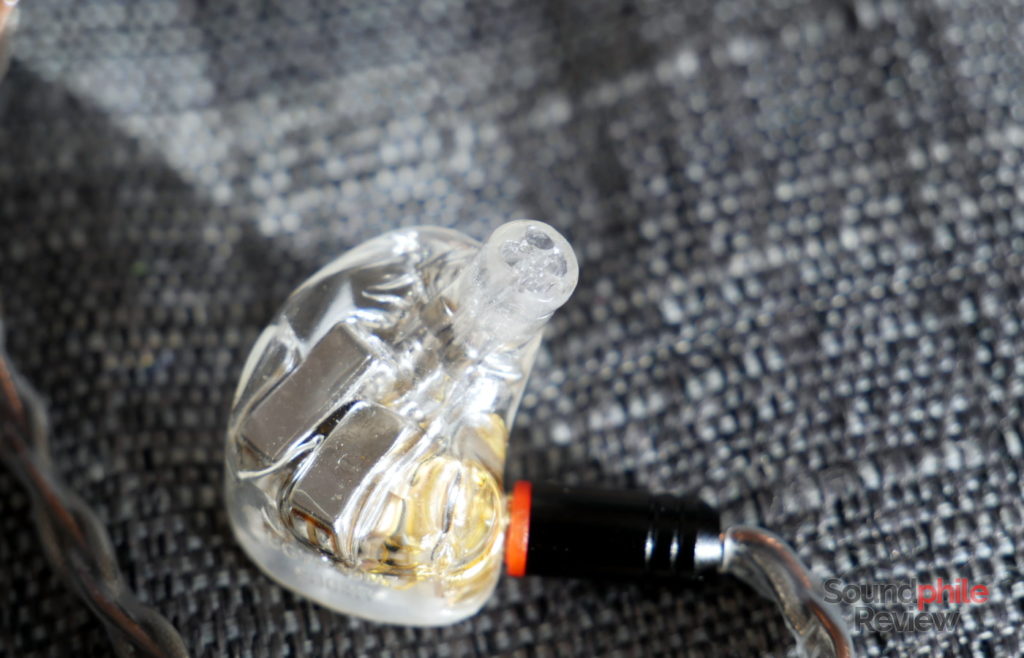 Build quality is very high: the earpieces appear rather sturdy, and the material seems of good quality. I haven’t tried to damage them for obvious reasons, but I expect the earphones to be durable and resistant if treated properly. 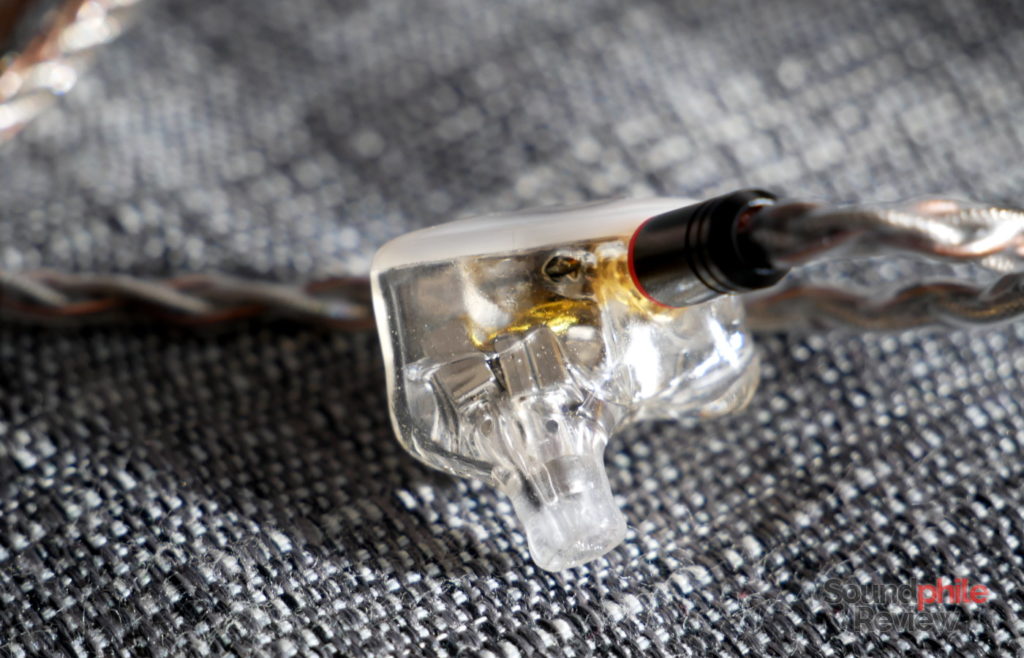 In order to get this review out in relatively little time I used the DM7 intensely, hours at a time every day for a week. They always stayed comfortable, as far as the earpieces are concerned. They fit my ears like a glove and I almost did not feel they were there. The cable is another story, though, as it proved not to be that comfortable to me. It tended to press against my pinnae causing discomfort in a matter of minutes. So although it’s well-made, it’s not as comfortable as it could. Please note, however, that comfort is even more personal and subjective than hearing, so my experience could be very different from yours: take my considerations with a pinch of salt. 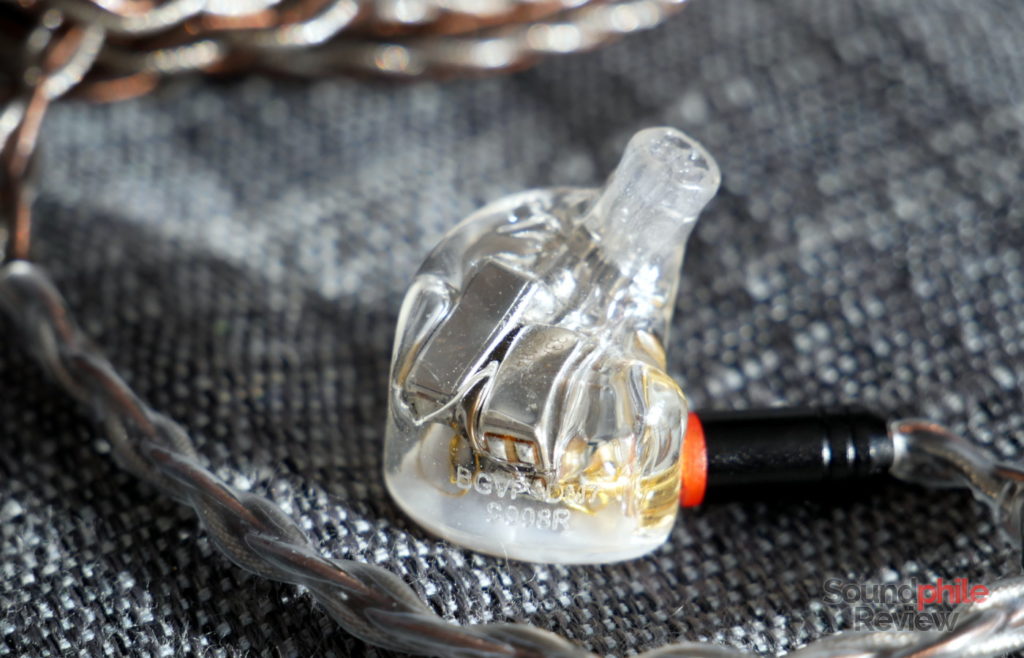 When designing the DM7, BGVP luckily didn’t make any changes that would negatively affect the isolation. On the contrary, the DM7 appears to be even more isolating than the DM6, granting a grade of noise reduction that basically means any sound from outside is suppressed, save for the loudest ones. This makes the DM7 ideal for use on public transport and in other similarly noisy conditions, as one doesn’t have to raise the volume to hear the music. This prevents hearing damage – something any audiophile should be aware of. 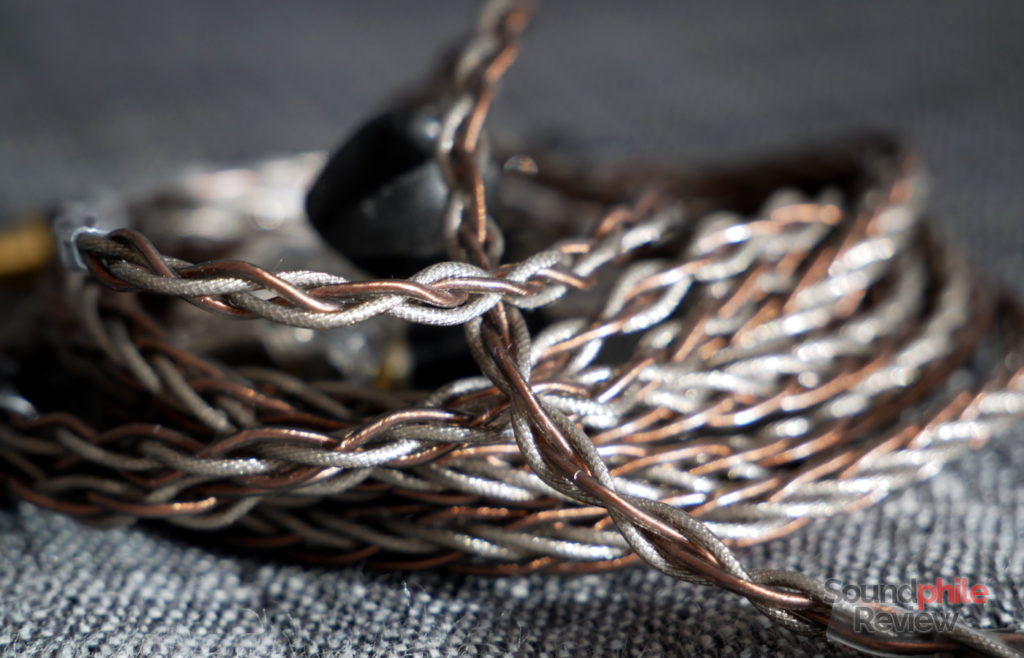 The cable reminds me of the Yinyoo brown 8-core silver-plated cable: it is almost identical both in look and in feel, as it is brownish (though it’s two different colours) and soft just like the other cable. Similarities go beyond this, as the cylinders (those near jack, Y-split and MMCX connectors) and the plastic ball used as chin slider are also identical. The main difference, as I mentioned, is the fact that the DM7’s cable is made of two different types of wires: one is brown-silvery, while the other is dark copper brown. The silvery one may be made with an alloy of silver and copper, given its colour. It is really well made and a very nice stock cable.

The BGVP DM7 sport six balanced armatures in each earpiece: one for lows, two for mids, one for highs and two for ultra-highs. To be more specific, the drivers used are the Knowles SWFK-31376 (super-tweeter), Knowles ED-29689 (tweeter), Sonion 33AP007 (midrange) and Knowles CI-22955 (bass). This configuration is easily driven by any source, given the low impedance and very high sensitivity. You may conversely need an attenuator to lower the volume to acceptable levels!

The DM7 surprised me with two things: first, the sound is always really clean and clear; second, it is really dynamic, as the earphones are able to present the listener with loud and soft sounds at the same time while keeping both in focus. This allows for the listener to hear smaller details even in crowded tracks where multiple instruments are playing at the same time and makes the whole sound be perceived as more detailed.

The BGVP DM7 offers the listener a wide, spacious soundstage. There’s a moment in Porn Piece or Scars of Cold Kisses by Ulver that sounds as if the sound was coming directly from speakers (by the way, I encourage you to listen to the whole album: it’s fantastic). The BGVP DM7 generally sound really spacious, but the impression of sound coming from around the listener is especially strong in some tracks. Every instrument has its place in this wide space, so it is easy to tell them apart just by paying attention to the direction the sound is coming from. This positioning is deadly accurate.

Instrument separation is nothing short of wonderful as not only can every instrument be listened to with great clarity, but there are many instruments that are often overshadowed by the rest of the music and that pop out instead. This is especially surprising as there are many faint sounds that are still clearly audible despite their low volume. It’s not perfect, of course, but it’s a notch above what I’ve come to expect from in-ear headphones below $500.

Bass reaches down to 30 Hz, but it’s barely audible at that point. It starts becoming clearly audible around 50 Hz, and then it becomes more or less stable at 60 Hz. The DM7 therefore do not impress with their bass performance, at least from a quantity point of view. Their signature could even be described as almost bass-shy – similarly to the Tin Audio T3. They don’t feel like they generally lack bass, however, instead only feeling like they lack a bit of depth. This is not entirely surprising, given the use of balanced armatures. Quality is another story, as the DM7 emerge as very competent. Bass is very well controlled and fast, with instruments sounding very detailed and with fast decay. This makes bass sound very clear and clean and showcase a level of detail that’s remarkable. As one would expect, though, this speed almost never translates to physicality, as the balanced armatures aren’t capable of giving the listener the same feeling of impact as dynamic drivers. All in all, the lower section is pretty impressive as it’s basically flat, with maybe a tiny bump in the mid-bass section, and thoroughly detailed. It’s really enjoyable whichever genre one listens to, though the lack of presence in the lowest area may be an important deficit in some cases.

Midrange sounds mostly neutral, with a possible touch of warmth that never becomes annoying or especially noticeable. On the contrary, the mids are well balanced and easy to enjoy as no part seems to pop out to the detriment of other parts. This good balance, which I may well call “almost neutrality”, does not mean that midrange is boring or flat (in a negative sense); on the contrary, it’s really engaging and lively. It really stands front and centre in the mix and it never goes behind bass or treble. I wrote possible warmth because it’s so close to being neutral it’s hard to say whether there’s really any colouration going on. This also makes any sibilance all but disappear. BGVP really nailed it with the tuning! I have come to expect fast transients from balanced armatures and the DM7 does not disappoint in this: drums, harps and other instruments that rely on impacts or other fast sounds (plucking of strings, etc) sound accurate and fast. This speed is also among the main causes behind the large quantity of details and their quality: the BGVP DM7 offers a whole lot of tiny details that are easy to hear – be it a musician in the orchestra drawing a breath or the pick hitting the strings of a guitar.

Treble stands out for its level of detail: the DM7 portray even the smallest details and nuances, so one can really dive into the sound and try to catch all that. I would say that this detail is mostly concentrated in the lower area of treble; the upper range is not as present (and therefore audibly detailed) as the lower one. Despite using two balanced armatures for super-high frequencies, extension is not superb; it is still more than acceptable and really good in general. Let me be clear on this: treble is airy and extended, with lots of detail in the whole area and good linearity. It is never harsh or fatiguing; it is instead really refined and likeable while being easy on the ears. It’s not perfect, but it is really really good.

As the tuning is mostly neutral, it is my opinion that the BGVP DM7 are suitable for practically any genre out there. The only exception, as I mentioned, are the genres that require bass to reach the deepest notes, as the DM7 do not offer this feature.

Here’s a quick comparison to other in-ear headphones:

The DM7 are incredibly good for their price. They really do sound exceptional. The DM6 were already among the best earphones you could buy under $400, but the DM7 take the thing to a whole new level as they are better technically and in terms of tuning. They really stand out in the crowd in terms of value: their balance and technical ability far exceed what I expected of earphones in their price range. The only thing they lack is a bit more sub-bass. And that speaks volumes of just how good they are.