“True wireless” earphones are getting better and better, and cheaper too, but that’s not always the case. The Whizzer TP1 could be interesting earphones, weren’t they hampered by many flaws that make them hardly recommendable. Flaws in design and connectivity, among other things, make them less than desirable.

Disclaimer: I received a free unit from Tripowin, who apparently sells Whizzer earphones for some reason. They sell the TP1 on Amazon at $55.

We’ve already seen the Whizzer TP1 and their packaging in the dedicated unboxing article – hit this Headphones in Pictures for more! 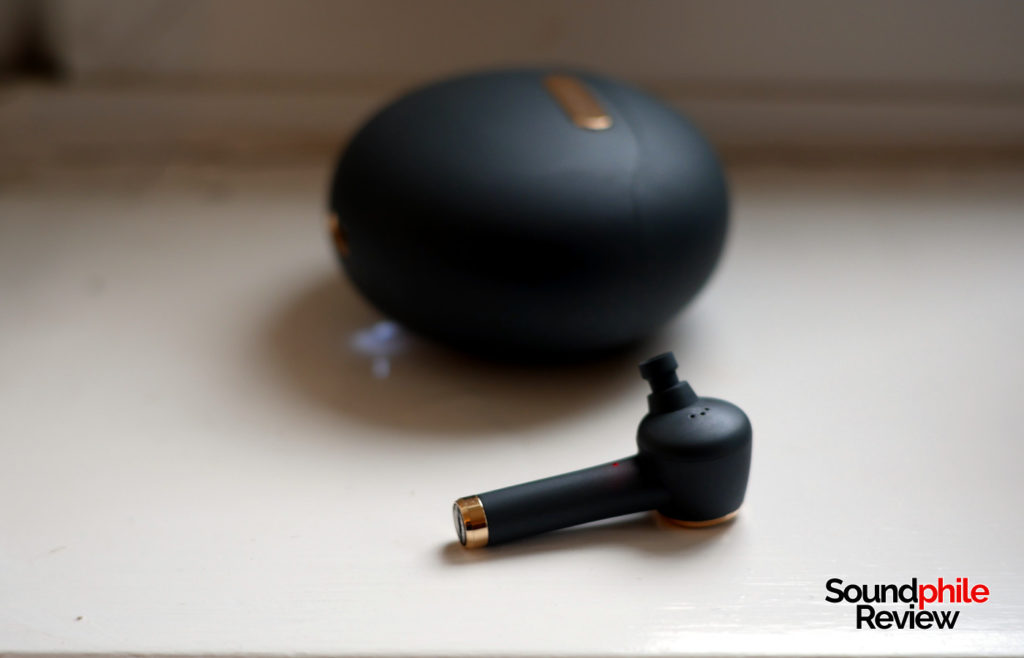 The Whizzer TP1 seem to blend in well with the design of other Whizzer products: they use the same blueish grey tone and gold accents. The shape is not similar to that of other Whizzer earphones, but that’s beside the point. They look good: their shape is simple and elegant and the combination of colours is good.

Now, Whizzer goes to great length explaining how much effort went into designing these earphones and how everything is there for a reason. The problem with this is that it seems Whizzer did not design these earphones. The Auglamour AT-1 are identical to the Whizzer TP1, down to the design of the box and the accessories. So either they are an ODM design produced by some obscure company in China, or Whizzer sells the design to others. I tend to believe the former option more. 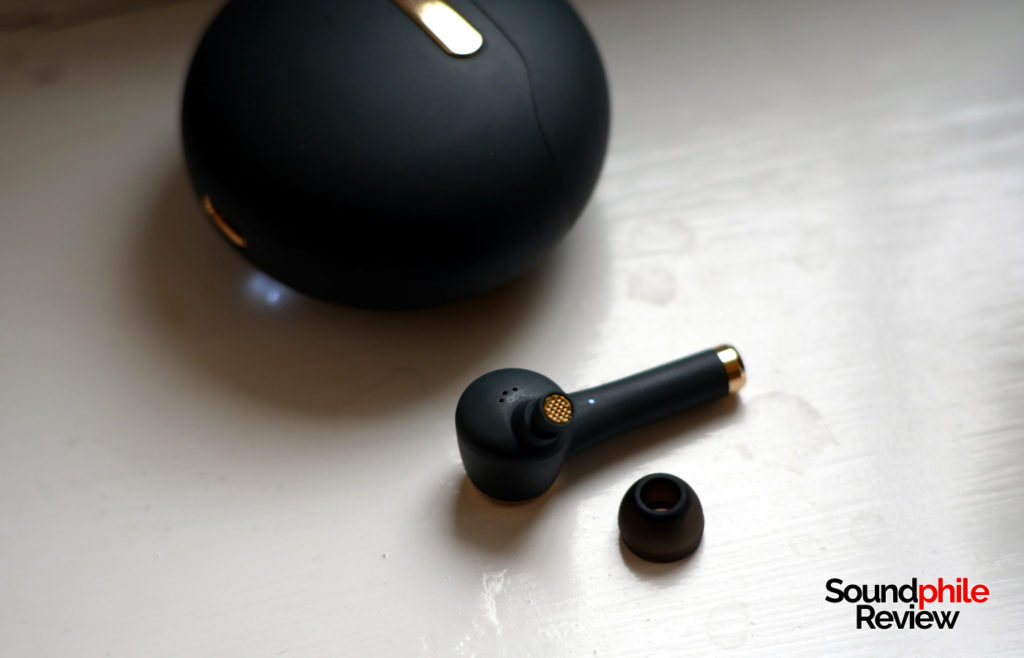 The Whizzer TP1 have IPX5 certification which makes them resistant to water splashes. No worries if you want to use them while it’s raining or during your workouts, these will work.

Comfort is actually pretty good: the relatively small footprint of the shells is positive for comfort and the absence of clear-cut edges prevents any fatigue to specific parts of the ear. I can wear the TP1 for more than an hour and only feel a slight discomfort due to the protruding “rod” (what would be the strain relief in wired earphones).

Isolation is really low, even when using foam eartips. This makes the TP1 not ideal for commuting or using in noisy environments. 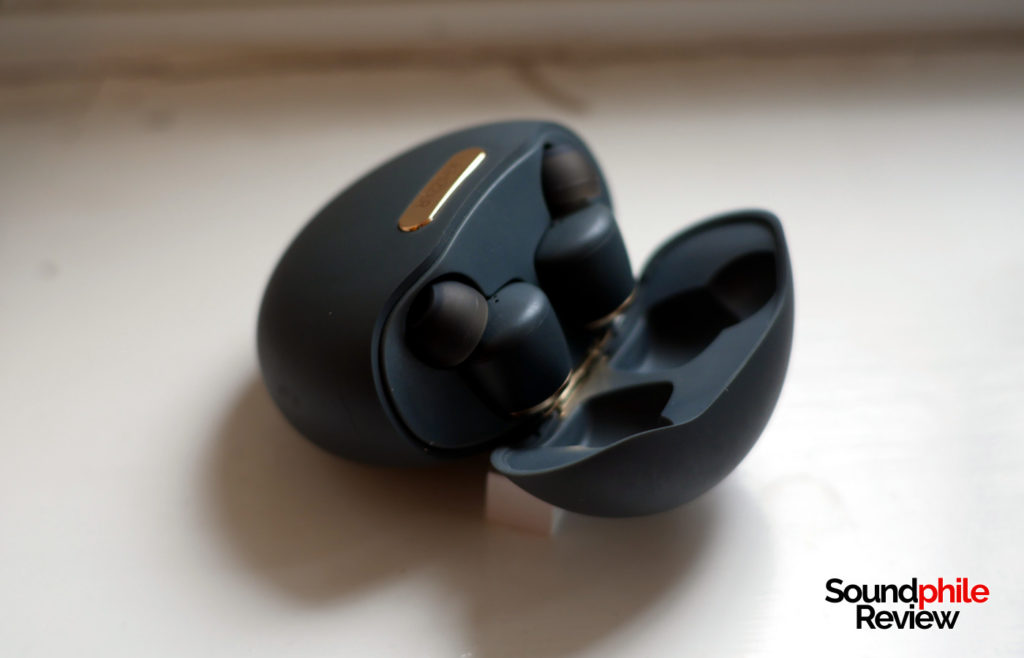 The case/dock is really nice to both see and touch. It’s perfectly round and the lid fits perfectly on the body, so it sits flush and there are almost no seams. The exterior is covered in soft-touch plastic which feels good but is a fingerprint magnet. 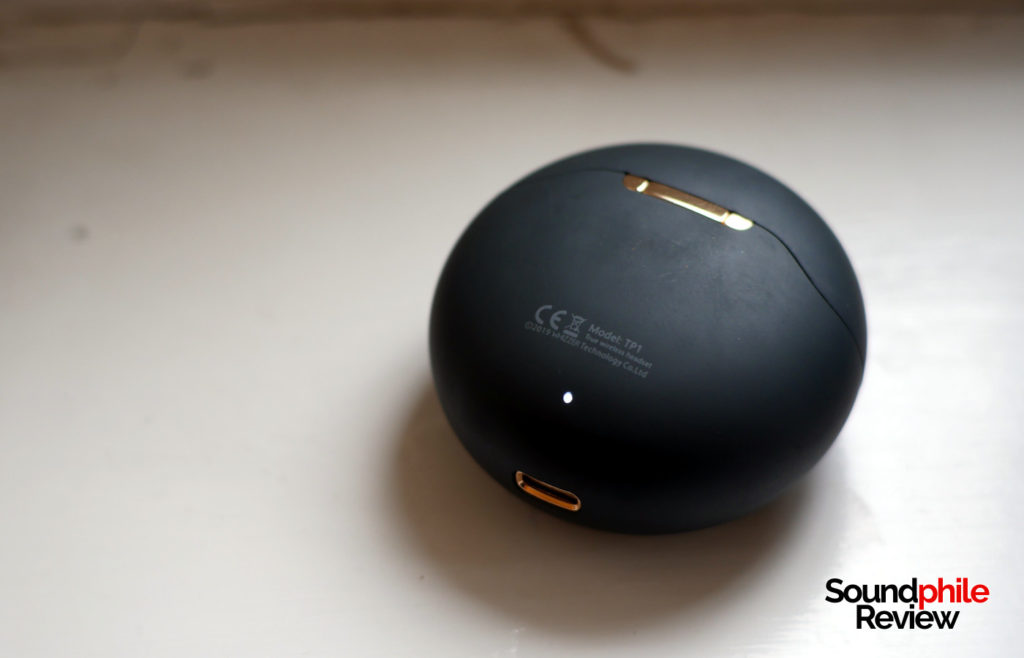 While aesthetically the design of the Whizzer TP1 case might be a win, functionally it is one of the worst I’ve seen in the TWS space. There is a number of design choices which make me seriously question why they were made. The two that bug me the most are the lid and the position of earphones inside the case. The lid is held in place by a magnet, but it does not stay open. In fact the hinge is so weak a soft touch can close the lid. Not the ideal thing when you’re trying to pick up the earphones. As for them, their placement is just terrible. Apart from the left channel being on the right and vice-versa, they’re rotated 180 degrees so that the eartips are facing you and, in turn, the shells are facing away from you. This wouldn’t be much of an issue if the earpieces weren’t rounded and difficult to pick up, forcing you to pick them by using the flat faceplate. But being them so close to the back of the case and the open lid, they’re difficult to pick up. This is such a failure of a design I don’t even know where to start.

The Whizzer TP1 feature Bluetooth 5.0 connectivity, which however does not grant any benefit in terms of sound quality (and it turns out it is in terms of battery life, too). The situation does not improve when we take a look at supported codecs: SBC and AAC are the only options. No aptX nor any other high-quality codecs which is not limited to Apple devices.

Alas connection quality is definitely not among the best features of the Whizzer TP1. Even with the player being at less than half a metre from the earphones, the TP1 kept on disconnecting, playing crackling sounds and generally offering a low-quality experience. The constant interruptions are in fact something that has a real impact on the listening experience – if the connection isn’t top-notch, you may as well used wired earphones because the wireless part doesn’t work gives you no advantage over wires.

One tap on the earphones should pause the music. I write should because that’s not what actually happens: the music is just muted, but the player goes on with playback. That’s… less than useful? Other features include double tap on the left earpiece to go to previous song and on the right one to go to the next song, plus holding the tap for a couple of seconds to invoke the voice assistant on the phone.

There is no way to control volume, which is quite unnerving as that feature is not only useful, but also sometimes essential. And I’m not just speaking of the fact that you sometimes need to adjust volume from the earphones for practical purposes, but also because you may actually need volume adjustment because the lowest volume on the source is too loud.

Four hours of battery life would not be too bad in general, but it’s more common with smaller TWS earphones. I expect larger earphones such as the Whizzer TP1 to offer better battery life, as they have more room to fit larger batteries in. The TP1 fail in delivering longer battery life and are limited to around four hours of usage.

I tested the Whizzer TP1 using mainly a Shanling M2X and a Honor 9 smartphone as sources. Both were loaded with FLAC files, mostly in standard resolution (16 bit / 44.1 kHz).

There is a relatively strong background hiss that’s especially noticeable with calmer tracks (e.g. the American Beauty soundtrack). Unconventionally enough, it changes in volume with the music, so it’s stronger when the music is louder. It seems to say “you won’t get rid of me so easily, you fool”, and it’s in fact really annoying, to the point it gives me headaches.

Soundstage has good width but no depth, so it’s really bidimensional. Not only that: due to the way my brain interprets sounds that the TP1 portray in the centre, or possibly due to a precise design choice with their imaging, it is as if sounds in the centre were inside my head and everything else was at the two extremes of my hearing. Since it’s the first time I ever experience this, I conclude that it is the TP1’s fault and that their imaging is a joke. Instrument separation is decent, but hardly more than that.

Bass is a tad more than what ideal neutrality would dictate, but that does not stop it from being enjoyable. It adds some warmth to the sound without sounding invasive nor excessive. It does not extend too deep and it’s mainly concentrated in the middle region, but that’s expected. Control is really basic, so there’s little detail and bass acts more as a kind of foundation for the rest of the sound to build on instead than a full-blown part of the ensemble. It’s more akin to the stage where the band is performing than to one of the band members. Speed is acceptable, but still not great, and physicality follows in being limited.

There’s something going on with midrange that doesn’t sound right. There is a peak in the middle-upper midrange which makes the whole sound fatiguing. The guitar in Dead Already in the aforementioned American Beauty soundtrack sounds too edgy and aggressive, on top of sounding as if it lacked something. Detail is decent, though the sound becomes less detailed as the track becomes more congested. Speed is actually good, contrary to bass, and there’s also some physicality to midrange.

Treble is not really special in anything: it’s laid back, with a very relaxed presence that makes it appear behind everything else, and it’s also not really detailed. Extension is really limited and this contributes to making treble “monodimensional” – it has really little depth, sounds are clear-cut with little nuances.

Let’s keep this part short. There are far better alternatives out there, with less issues and an original design (e.g. Lypertek Tevi, KZ E10). Let’s pretend the Whizzer TP1 are just not there. Yes, they are relatively cheap, but this is no justification for poor connection quality.