Some earphones manage to rip through the curtains of anonimity and become highly-hyped products that everyone seems to be looking for. That’s the case for the BLON BL-03, which are the first really widely-acclaimed product by the Chinese manufacturer. That’s not without merit: the BL-03 are really good for their price. Are they as good as some picture them though? Let’s find out.

Disclaimer: Lillian at Linsoul kindly sent me a free unit in order to write this review. The BLON BL-03 retail for $38 on Linsoul.com.

Despite the low tier the BLON BL-03 are in, which we might as well call “entry-level”, they are fitted with a surprising amount of accessories. The box holds the earpieces, the removable cable, three pairs of silicone tips and a small fabric bag.

The box is too funny not to mention. It has the largest amount of errors and bad translations one could dream of, including completely nonsensical words such as “oppoty”. It seems like the people at BLON just threw whatever text it was in Chinese in a bad automated translator and called it a day, which has led to all sorts of incredibly imbecilic translations. That’s just like what happens when people tattooing “spring roll” in Thai on their chest: in the end it’s just fun! 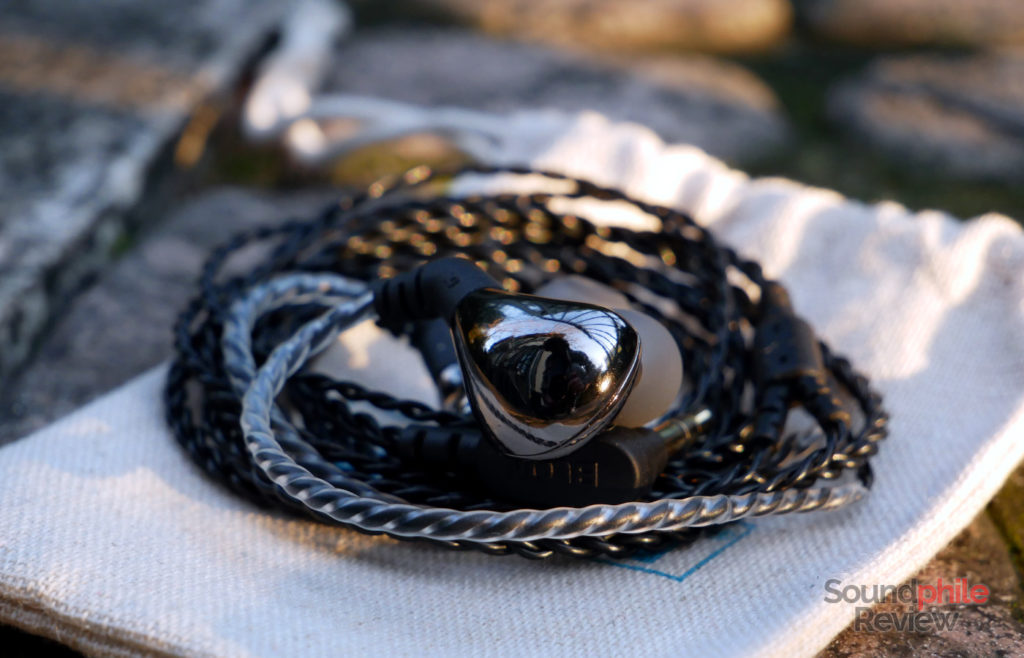 The BLON BL-03 are shaped like drops, with the summit hosting the 2-pin connector for the cable. The shells are entirely made of metal; they have a shiny, polished finish that make them appear chrome-plated. They’re basically chrome drops! They look oddly (and a bit unsettlingly) organic, as they only have curved lines and surfaces. I wouldn’t deem them out of place in a modern art museum (but that’s possibly also because of my poor understanding of modern art). 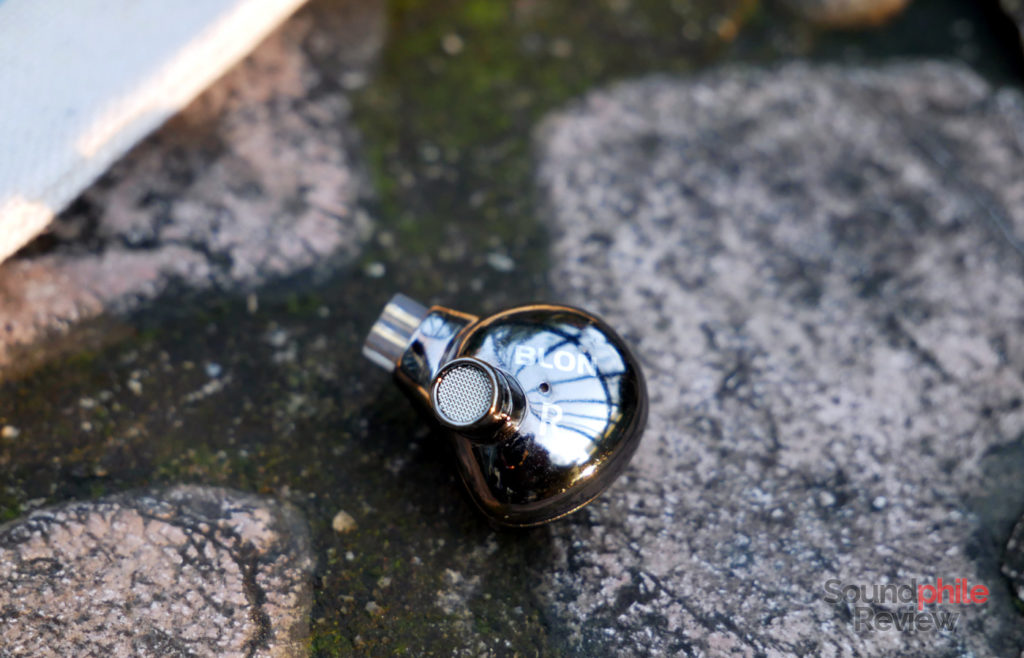 The build quality is rather good for the price range. The BLON BL-03 is definitely not perfect, but it is built well enough to appear reasonably durable and resistant to a bit of abuse. The fact that the shell is made of just two pieces of metal also makes it more resistant than more complicated shells.

As far as comfort goes, I found the BLON BL-03 to be pretty good once you wear them. The point is that putting them on is a nightmare! The almost rounded shape of the earpieces is difficult to get a grip on, so it’s hard to put the earphones on (and taking them off). It takes some practice, though this is the only negative point of the wearing experience. The rounded shape also means that there’s no sharp edge wedging against your ears, which usually (and in this case, too) makes earphones quite comfortable. 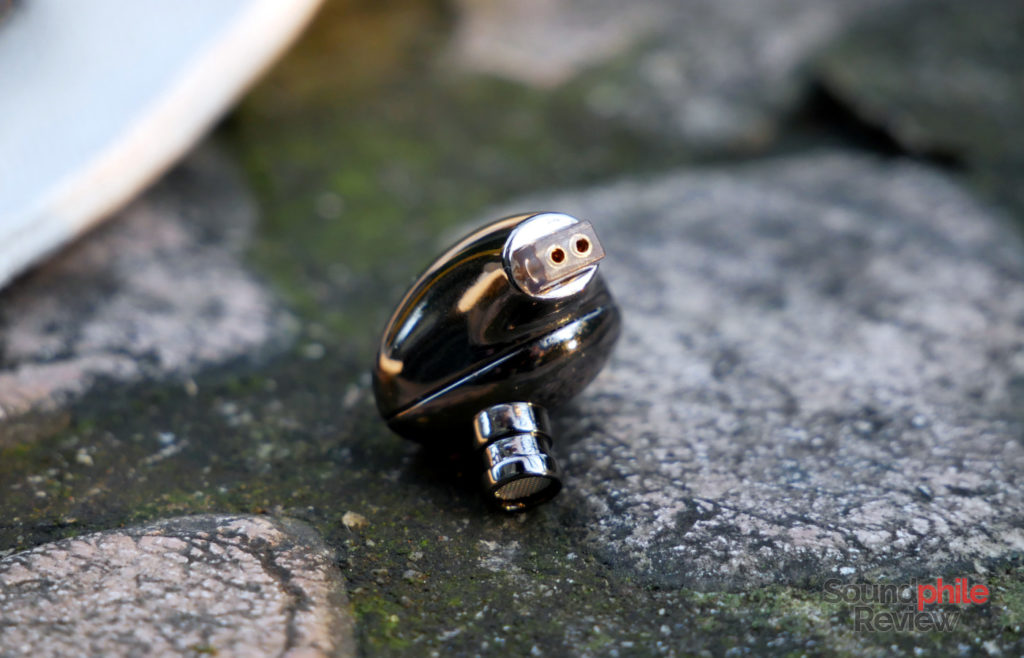 The very short nozzle also means that they won’t go deep inside your ears and will therefore require larger eartips. This may be an issue for both comfort and isolation, as getting a good fit becomes quite difficult. Finding the right eartips may be challenging: in my personal case, I found it difficult to find eartips that provided good seal, as even the large foam tips I usually use proved too small. In the end, the best tips I found were the Dekoni Bulletz.

Isolation is non-existent if you don’t find the right eartips and it’s decent at best if you do. I would not recommend the BLON BL-03 if you are looking for headphones that offer high isolation, but they’re quite enjoyable in low-noise environment. 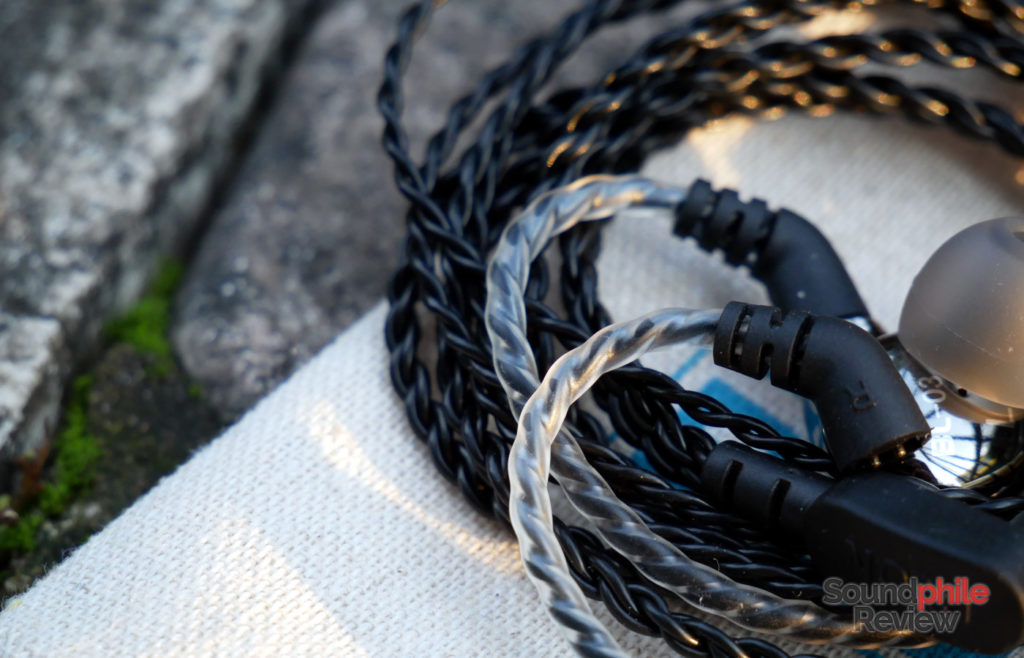 The cable is part of the issue with fit, as the shape of the cable itself and the heat-shrink tubing make the fit less than ideal. The cable itself is made of four cores, two per channel, which are fairly thin and covered in black plastic. It’s – understandably – the least interesting feature of the earphones and the one thing I would recommend replacing. While it’s good enough for casual use, I suspect that its thinness would fail the test of time (and associated use).

I tested the BLON BL-03 using various gear, including a Topping D30 feeding a Venture Electronics RunAbout 2.0bl and a Topping DX7 while at the desk, plus a Shanling M2X while on the go. In both cases source files were chiefly FLAC files ripped from CDs (16 bit, 44.1 kHz).

The BLON BL-03 are indeed incredible from the perspective of price/performance ratio. Their tuning is not perfectly neutral, but it is definitely remarkable in its balance. Considering they use a single dynamic driver, they’re possibly even more remarkable.

Soundstage is decently large for a closed-back IEM, but more importantly it has some depth. More impressive is imaging, which is spot on: each instrument has its own place on the stage, with good layering on top. Instruments are separated well enough that only the most crowded tracks show signs of mingling.

In an unconventional (but not unique) take on bass, sub-bass is the area where most focus is. It reaches the deepest frequencies with enough volume for them to be perfectly audible, and the fact that the volume decreases after them instead of increasing as usual makes them especially noticeable. I would say that the resulting signature is not neutral at all, despite being absolutely enjoyable: it has a bit too much sub-bass and mid-bass than what ideal neutrality would dictate. Plus, it’s sometimes a bit overbearing. What this emphasis entails, though, is that bass is absolutely fun to listen to, as it’s clean enough. It’s not super-detailed, nor super-fast, nor very good at layering, but it’s good. In all these fields it’s competent enough to be very enjoyable even for critical listening. The only thing that’s not really there is the physical aspect: impacts do not convey too much of a physical sensation.

Midrange is quite interesting, as it is almost linear. It is close enough to it that those who prefer a more toned-down approach to upper mids than Harman will find it appealing. It’s lively and it appears front and centre on the scene, without being “in your face”. It’s really clear and clean, with a very good amount of detail that stand out thanks to the good clarity. Voices, both male and female, appear well balanced, as one can hear on Second hand news by Fleetwood Mac. Just like bass, what is present in small quantity is physicality, as drums and other percussions (plus plucked instruments) do not convey that sense of something physical that they should. It’s nitpicking, but still… Nothing really stands out, but that’s not because it’s dull. It just sounds equally as enjoyable with all instruments.

Treble is remarkable in how it is tuned. It offers a relatively linear response, with just the upper frequencies that roll off and become inaudible. There’s a bump in the middle region, though, which helps with clarity and lends the sound air and space. The overall tuning is airy, pleasantly sparkling and never offensive. Those sensitive to treble will probably want to equalise it down half a notch, but everyone else will probably just enjoy it as it’s never aggressive, sibilant or excessively present. It’s also well detailed, so details emerge clearly and are always identifiable. There’s not a large presence of micro-details, but this is expected and it’s remarkable enough that there are micro-details at all.

The BLON BL-03 are probably good for every genre out there, but bass-heavy genres are just too much fun. These will probably be my go-to earphones for electronica.

As the BLON BL-03 sound really well, I am going to compare them to products from varying price ranges. That’s because they have been compared by some to top-of-the-line earphones. So let’s see how they hold up against various competitors:

Honestly, it’s amazing how well the BL-03 hold up against earphones costing even almost 20 times as much. The differences are there, however, and they’re undeniable.

I read people describing the BLON BL-03 as being “as good as any flagship model costing more than $1000”. In my opinion that’s simply not true. While the BL-03 sound pretty darn well, they also do not have all the features of flagships: their technical ability, their build quality and detail are not as good, there’s less consistency between channels and units and – however irrelevant that might be for headphones in the sub-$50 range be – customer support is non-existent. Does this mean they’re not good? Absolutely not! The BLON BL-03 are fantastic in-ear headphones that wipe the slate of the sub-$100 market clean and write their name on it. It’s really difficult to find anything that can compete with them on all aspects in this market segment. If we take tuning and technical ability as metrics, they are probably going to compete with earphones up to $200-250, possibly even $300. That’s a huge achievement in my book and it gives you a clear idea of how good the BL-03 sound.

Having that said, as a general rule I would never recommend them in place of flagships, or even earphones costing more than $500 really. Still, they are probably the go-to earphones under $50 right now, and most people could be 100% happy with these without needing anything else. Just like the Tin Audio T2 before them, they are going to define how high the bar is set in this range. Until the next shiny new thing comes.

This review was updated on 16 July 2020 and the rating was updated to reflect the evolution of the market. I also realised I gave too much importance to some areas while giving too little to others. I regret the mistake.