In my experience, being an audiophile means, among other things, to always demand the best audio quality the circumstances allow. That also applies to mobility and listening to music while on the go or away from one’s full setup at home. That’s why portable DACs and amplifiers are born. Some manufacturers are taking the initial statement literally and offering portable products that offer extremely-high-res and DSD decoding. The Topping NX4 DSD is one for those devices and, as the name implies, it is capable of decoding DSD too.

Disclaimer: I received a complimentary review unit from Topping to write this review. I will keep it for future comparisons. Please check the official product page for additional information.

A comprehensive look at what’s in the box can be found in the Headphones in Pictures article I published on the NX4 DSD and the Yinyoo Pro. 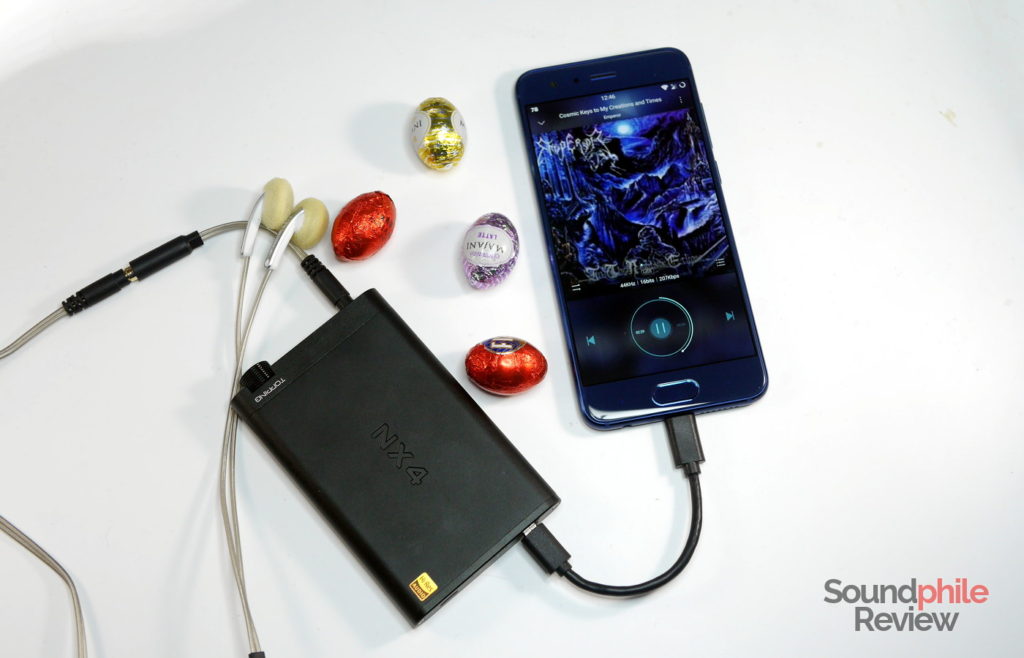 There’s a saying in Italy: squadra che vince non si cambia (“you never change a winning team”). Given how previous products got good reception from critics and public alike, Topping decided to stick with a winning decision. The Topping NX4 DSD is similar to its smaller sibling, the Topping NX1s, in that it has a body with rounded corners made from a single slab of aluminium and a knob protruding from the top. In this case there are no “horns”, though, so it looks streamlined and simple, quite akin to the other models in Topping’s line-up. In fact, the shell is identical to that of the NX4. 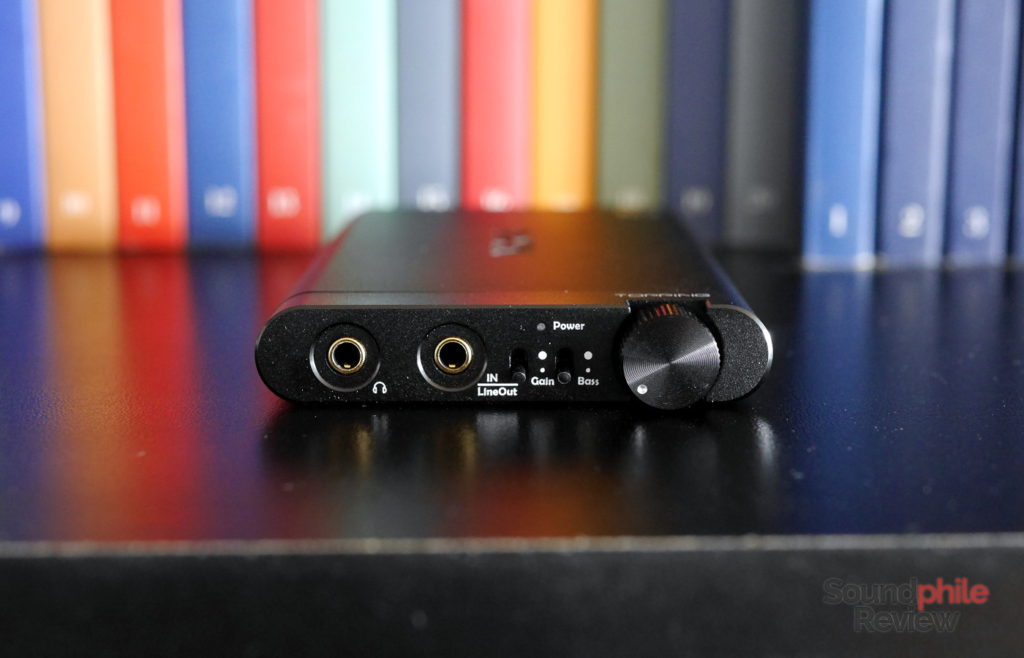 The Topping NX4 DSD is available both in black, as pictured here, and in silver. It is made of three pieces (top, bottom and body) with almost no seam to separate them; the central piece has “NX4” carved directly from the aluminium slab, contrary to the NX1s’ printing. Build quality is top notch: the NX4 DSD is solid and resistant. The all-aluminium build should make it last for years and make it resistant to daily use – it seems like it doesn’t fear getting dumped in a backpack.

Much like the NX1s, the Topping NX4 DSD is rather small and light: it is 11 x 6.8 x 1.4 cm and it weighs 147 g – it is definitely portable and can be slipped in a pocket with a phone without much afterthought, as it is not that noticeable once tucked away. 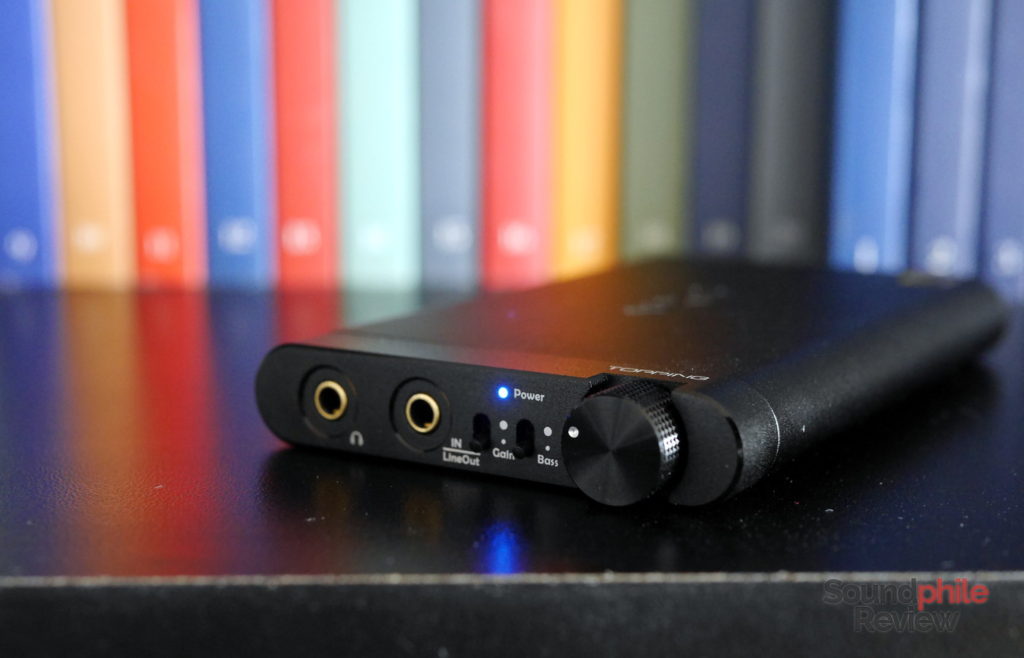 On the top side you can find the volume knob (which also acts as the power switch), the power LED, the 3.5 mm jack input, the 3.5 mm jack output and two switches: one is for gain, the other for bass equalization. On the opposite side there are two different micro-USB ports: one is for charging, the other for data connection. The Topping NX4 DSD is meant to be used with mobile phones and other portable devices, so splitting charge and data ports is a neat trick to allow it to work without draining the battery of the linked device. It is not as neat as that used on the iFi nano iDSD Black Label, but it’s a practical alternative.

The knob is machined and its shape helps grip; it is fairly hard to adjust, but in a positive way – it does not move freely and allows for precise adjustments. Its “resting position”, which indicates the device is off, is around 7 o’clock. It offers a bit of additional resistance when you turn it, and it clicks once the device is powered on. 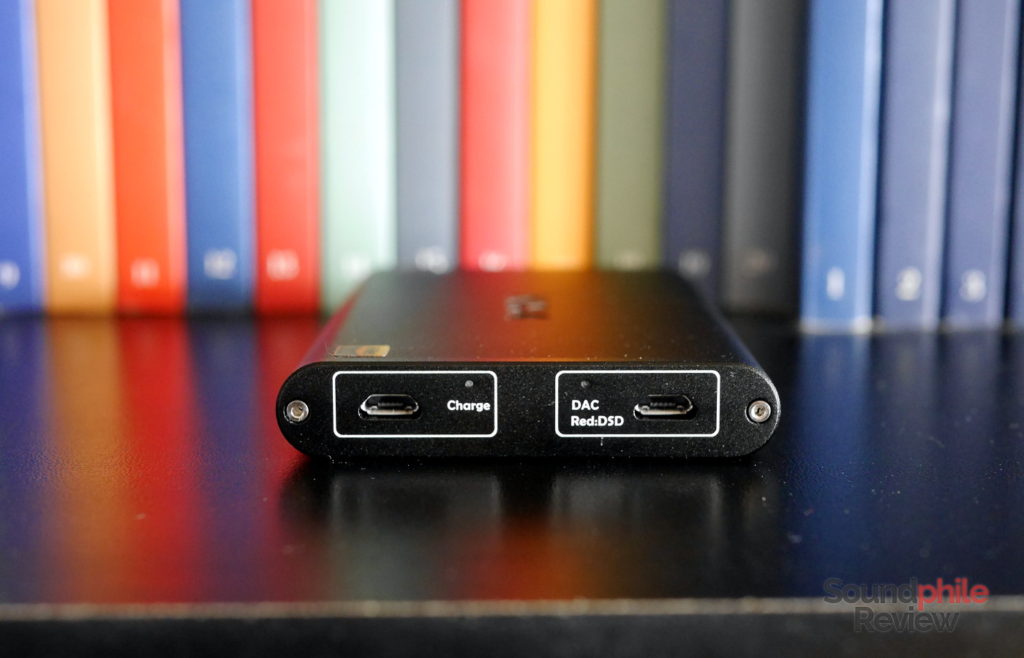 Topping chose to limit the possible inputs to just two: micro-USB and 3.5 mm jack. The former makes the NX4 DSD work as a DAC and amplifier, the latter just as an amplifier. In terms of output, the choice is not varied either: you can opt for the headphone out port or the line-out port, which is also the 3.5 mm input. There are no optical input or RCA output – this is a “pure” portable device with limited options.

The NX4 DSD also offers two different switches to adjust gain and bass boost. The gain switch allows you to select either 0 dB or 8.8 dB, providing a large volume boost for hard-to-drive headphones. The bass switch alternates between no bass boost (with almost perfectly linear sound, as we’ll see later) and a bass boost that increases the volume of frequencies below 200 Hz. 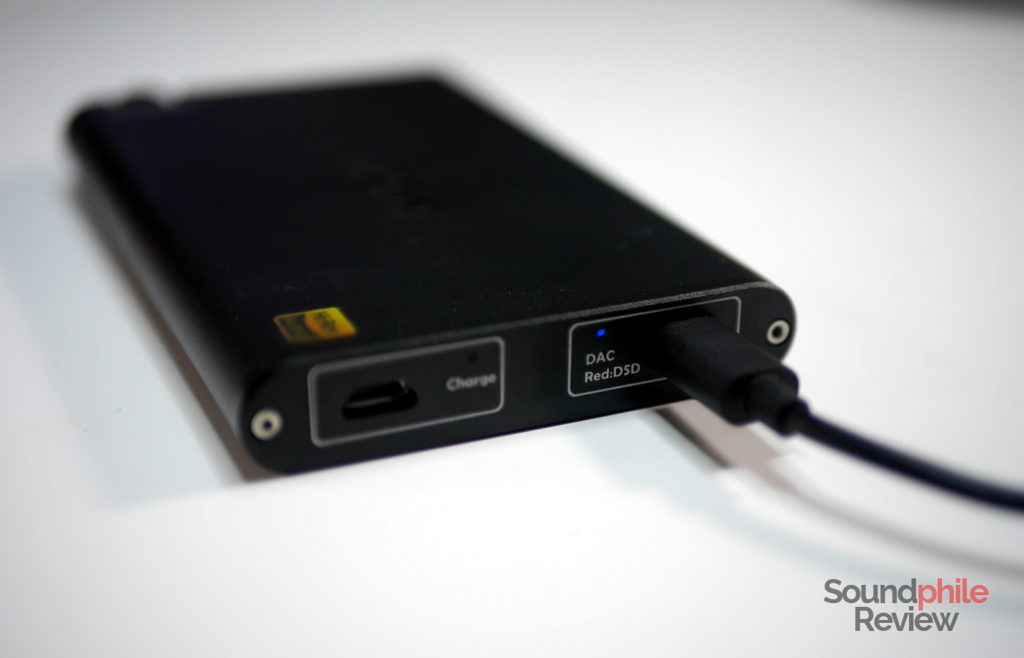 Linux is supported out of the box, without the need to install anything; the same applies to macOS, though I was not able to test this myself. Windows, on the other hand, requires the installation of drivers that are provided on the product page on Topping’s website. They’re especially needed if you want to play DSD files, as it is not natively supported by the operating system.

Mobile platforms are also supported out of the box: iOS is supported without further actions (though you need to use the camera kit, as far as I know), while Android is more of a roulette because not every device supports USB audio output. The only way to know if your device supports it is to search online and/or to try it yourself. As a mobile-first device, anyway, the Topping NX4 DSD should work with most phones that support USB audio.

Topping chose the new ESS Sabre ES9038Q2M DAC to power the NX4 DSD. It enables the playback of source files ranging from 16 bit – 44.1 kHz to 32 bit – 768 kHz, including DSD files up to DSD512. It is compatible with both native and DSD-over-PCM (DoP) DSD playback.

Thanks to its 114 mW output on 300 Ω, the NX4 DSD is more than capable of driving demanding headphones. It drives my Sennheiser HD6XX and HiFiMAN HE-560 almost effortlessly, though they are quite demanding in terms of power.

With the NX4 DSD, Topping managed to achieve low output impedance and that would make it suitable to use with low-impedance IEMs. The combination of powerful output and knob “dead zone” (a zone with strong channel imbalance), though, makes it difficult to use low-impedance or high-sensitivity headphones: the channel imbalance goes away around 10 o’clock, but the volume is way too high by then using 16~32 ohm earphones. In order to use those headphones I used the iFi Ear Buddy or the iFi IEMatch, so that volume would be more tolerable.

I find the Topping NX4 DSD’s battery life utterly satisfying. Considering the size and weight, the ~8 hours I could squeeze out of it in DAC mode are truly remarkable. When using it as a headphone amplifier only, battery life more than triples. To put things in perspective, you can use the NX4 DSD in DAC mode for a full working day at reasonable volume levels, or three days in amplifier mode.

As I already mentioned before, the charging port is physically separated from the USB input port: you can use the NX4 DSD with portable devices without draining their batteries. That is one of the issues that arise when using external amplifiers with mobile phones or DAPs – they do not “know” that the connected device should not be powered, so they send power through the USB connection anyway, draining the internal battery hella fast. The solution adopted by Topping has the drawback of requiring two cables if you want to use the NX4 DSD with your computer and keep it charged.

I listened to the Topping NX4 DSD using the following headphones: Sennheiser HD6XX, HiFiMAN HE-560, KZ ZS6, TRN V10, Yinyoo Pro, Venture Electronics Asura 2.0s and Venture Electronics Monk Lite (both 40 Ω and 120 Ω). I used standard-res FLACs (and a few high-res files, too) and a few 320 kbps MP3s, too.

The bass boost switch adds a significant amount of sub-bass thump, especially in the lowest frequencies. It helps bass-shy headphones or gives an additional serving of punch and depth to neutral sound signatures. Using relatively bright headphones such as the Venture Electronics Monk Lite, the difference is night and day: the bass boost gives the sound depth and body that would otherwise be missing. The effectiveness and the end result of the bass boost is ultimately dependent on the headphones and on the listener’s taste; technically speaking, anyway, it is a good implementation that does not generally make bass overpowering and bloated, but it just adds to what is already there.

The one thing that the bass boost does not have is multiple levels: the iFi micro iCAN SE, as an example, offers two different levels of bass boost. That would come in quite handy, but I do not see its absence as a flaw, rather as a missed opportunity.

While listening to music using the Topping NX4 DSD, I can’t hear any departure from neutrality. The device appears to have a completely flat response, so it does not get in the way with its own sound signature. There may be a slight roll-off in the sub-30 Hz region, but it’s so slight it is barely noticeable. This means the NX4 DSD is not really selective when it comes to headphones; you can just plug them in and listen to them without listening to the DAC/amp section – that’s lovely.

Soundstage and instrument separation are “neutral”, too – the NX4 DSD does not interfere with the headphones and does not introduce any modification in music. The resolution and speed are great and the device is able to render small details and to drive fast headphones with competence, making them shine. That’s the case for the Asura 2.0/2.0s, as an example.

The background is completely black, even using sensitive and hiss-prone headphones (the TRN V10 and the Venture Electronics Monk IE Smalls) and independently of the power source, be it the battery or the USB connection.

There are no sound differences I could hear when using the line-out mode. This makes the Topping NX4 DSD a good source, too, and one can use it in tandem with an amplifier that better suits their taste or that has additional features (e.g. the iFi micro iCAN SE).

In terms of sound, I could not identify large differences when comparing it against the iFi nano iDSD Black Label or the RHA Dacamp L1; when taking individual features away, the three sound so similar and they only have slight differences in the sub-bass region (which are quite hard to locate anyway).

In the last year or so, since I started to work with Topping and to review their products, I have come to expect great features and great sound from their products. The Topping NX4 DSD does not let me down and comes out as a compelling device: its small size, large power output and basic but useful features make it an excellent product. I especially like the long battery life and the distinction between an input port and a power port, so it won’t impact on the battery of other portable devices.

With the low output impedance leading to compatibility with low-impedance headphones and power output being sufficient to drive full-size cans, the Topping NX4 DSD is able to drive most headphones on the market. Its neutral sound signature means you won’t hear it – you will only hear your headphones, which is just great. Considering the sub-$150 price, the value of the NX4 DSD is excellent. Topping nailed it once again and created a fantastic portable companion. It is so good it is probably one of the best sub-$200 portable DAC/amps on the market right now!