BGVP made a huge splash last year with the DMG and they now have a successor. The BGVP DMS take the DMG, make a hole in them (literally!) and provide the listener with a better balanced, more neutral signature. This makes them more attractive to those who found the DMG too aggressive.

Disclaimer: this sample was sent by Linsoul Audio in exchange for this review. They sell the BGVP DMS on their website and on Amazon at $159.

The cardboard box that holds the BGVP DMS includes the earphones, nine pairs of eartips in different sizes and shapes (three sizes of dual-density silicone tips plus five sizes of black silicone tips and one pair of foam tips), the cable and a shirt clip. It’s quite in line with the accessories included with other products by BGVP, so it’s not surprising there is no case. Additional pictures are available in the related Headphones in Pictures article. 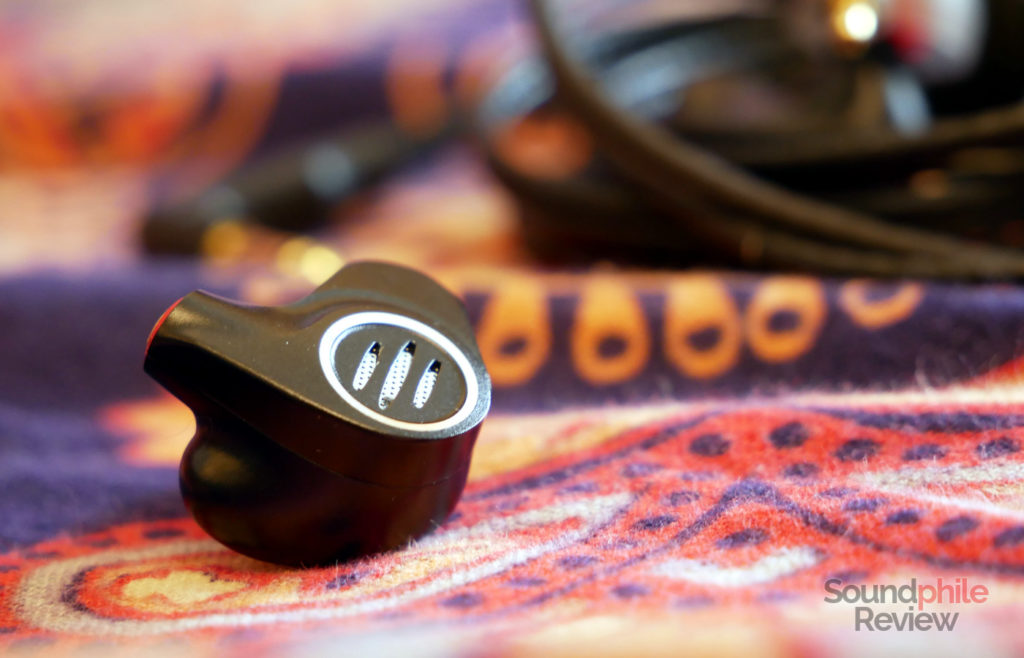 Being the heirs to the DMG, the BGVP DMS are really similar to their predecessors in terms of design of the shells. The shape is actually identical and the most significant difference is the faceplate, with a grille inserted inside BGVP’s logo. That grille appears to be “real” as the earphones offer no isolation, so it seems that the DMS are semi-open. 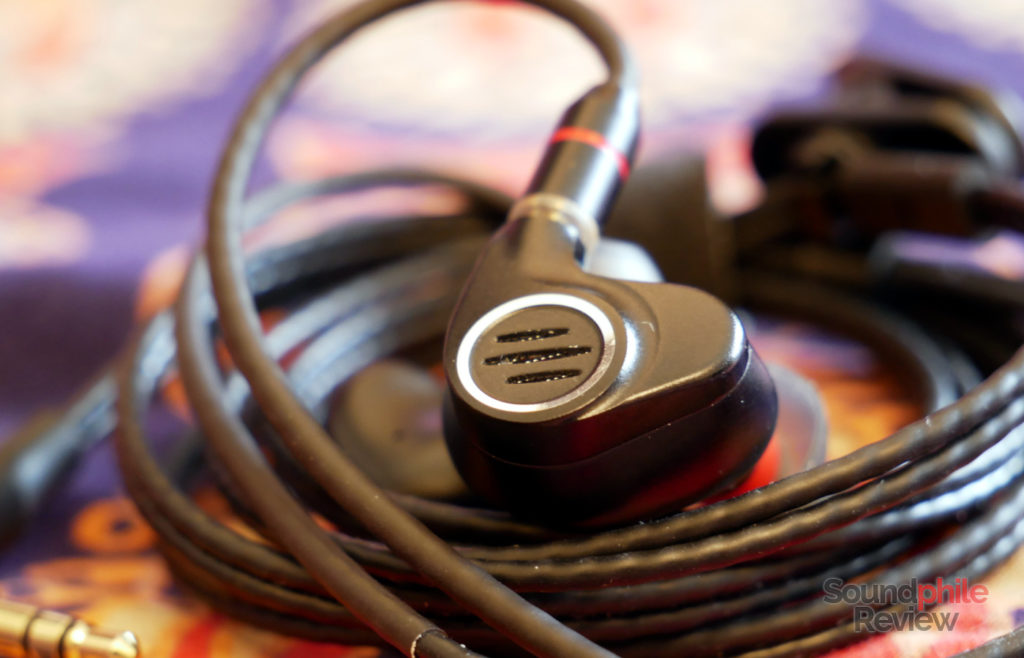 The BGVP DMS appear to be put together quite well, with their metal shells that appear resistant and well made. Like their predecessors, the DMS come in either black or blue but, unlike them, they don’t feature any tuning filter system. 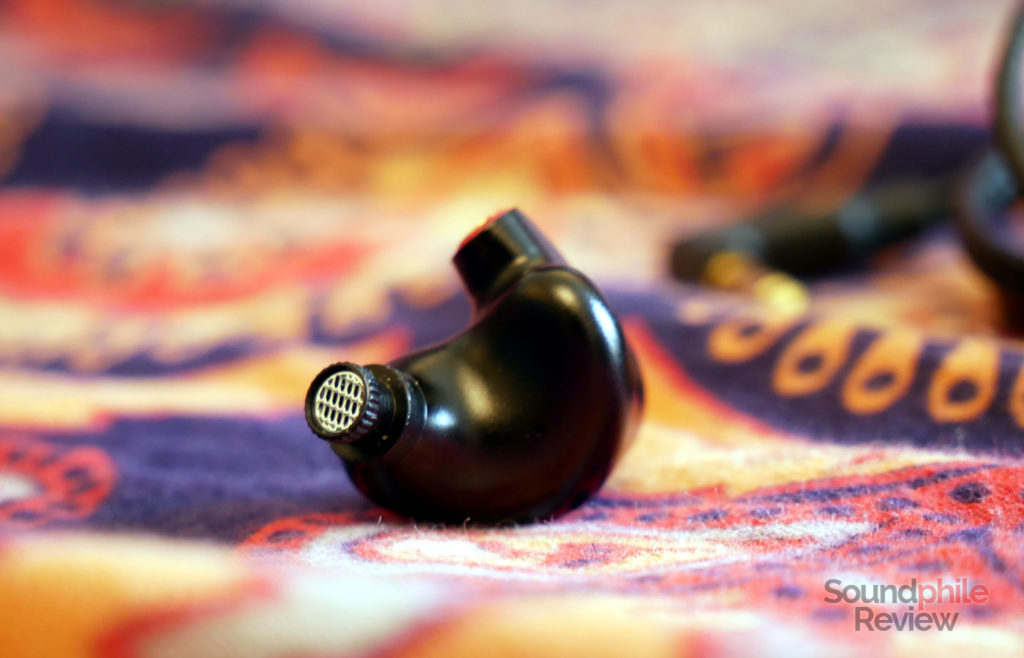 Although it is a deeply personal matter, the BGVP DMS should prove comfortable to a lot of people due to the way the shells are shaped. They are loosely triangular, but shaped so they adapt to the ears. They’re not heavily ergonomic like the Toneking T88K or the KZ ZSR, so they should be comfortable to a large amount of people. They are not as comfortable as the DMG either, because their faceplate has clear-cut edges that prove way less comfortable than the DMG’S rounded edges, though they can still be worn for a few hours before fatigue kicks in. 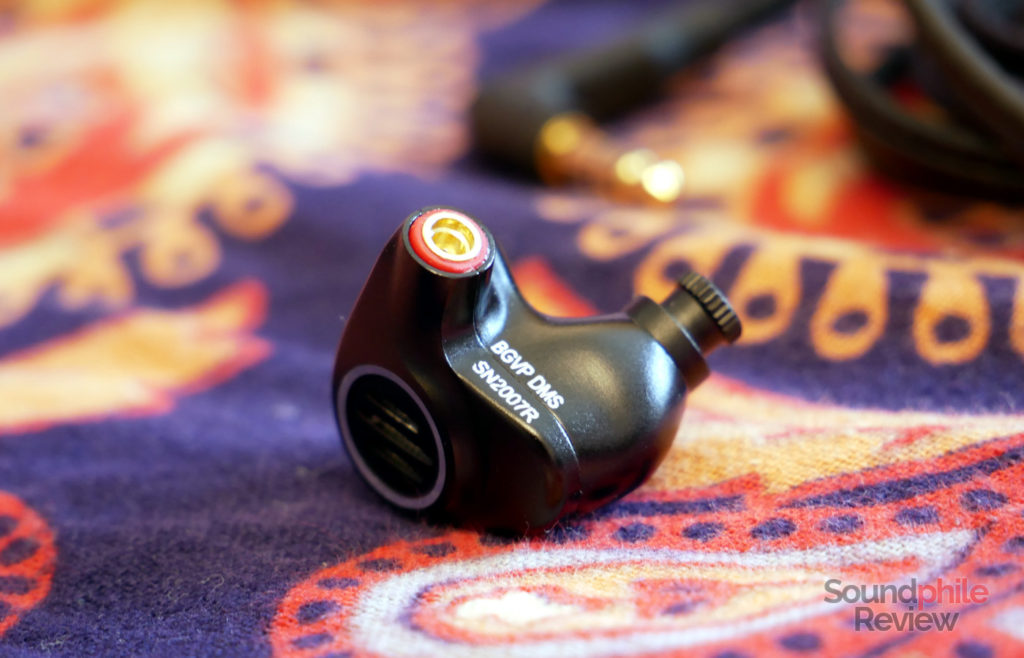 Isolation is non-existent by all practical means. The BGVP DMS in fact offer but a slight reduction of the volume of sounds coming from outside, leaving you exposed to whatever is happening around you (for better or for worse). They are not suited for use in noisy environments, unless one wants to crank up the volume to unsafe listening levels. 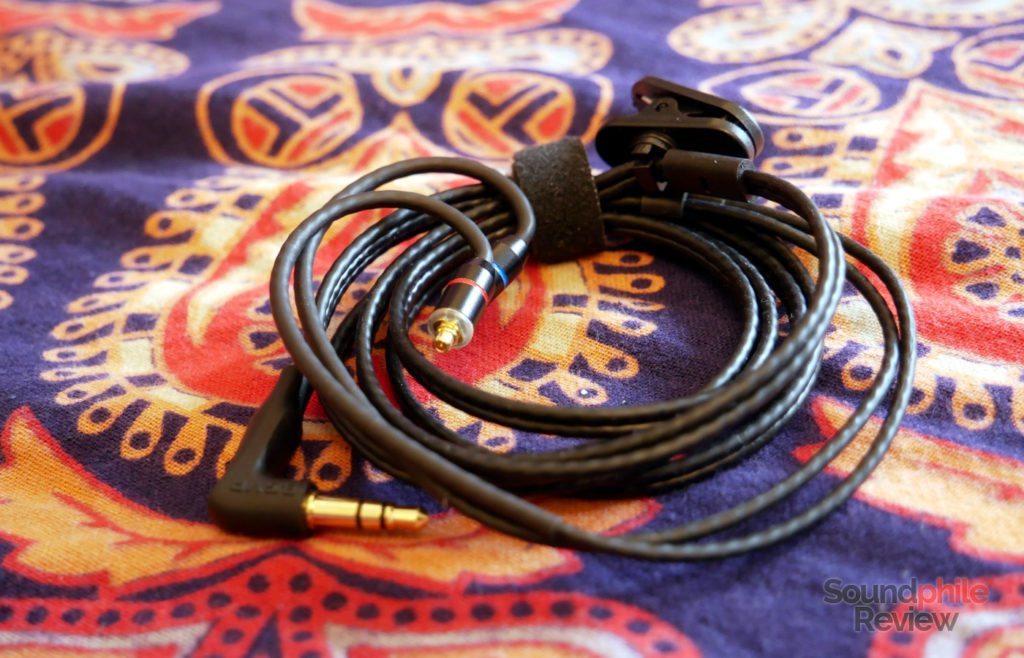 The cable is not as fancy as the one provided with the DMG, as it is not a woven silver-plated thingy, yet it offers good materials and build quality. It is a twin cable configuration, as it has two cores, each with its own plastic sleeve, that are fused on one side. The jack is right-angled and that helps if you use the earphones with a DAP in your pocket as it doesn’t risk damaging the socket. The cable appears well-made, with the plastic sleeving that appears solid and resistant enough. It has a few flaws, though: the earhook is not really tunable to one’s ear shape, so it may end up pushing on the wrong part of the ear and cause discomfort (as is my case). The cable is also a bit stiff, so it again is not really ideal for comfort in long listening sessions.

More and more drivers are being shoved inside earphones these days, and the BGVP DMS really takes this to a whole new level with one dynamic driver and six balanced armatures per channel. The company uses a mix of Knowles and BGVP-made armatures. Lower-than-average impedance and high sensitivity make the BGVP DMS especially easy to drive, so they need no amplification to sound well.

While the semi-open back strips the BGVP DMS of isolation, it affords them a large soundstage that gives the listener the impression of the sound stretching beyond the listener’s head. Soundstage is large not only because it is wide, but also because it is deep; in fact it sounds like a decently large three-dimensional space. Where the DMS are not as impressive is imaging, which is only able to roughly place instruments on the stage but can’t give them accurate placement in specific locations. On the other hand, instrument separation is around average and leads to a clear picture of what’s happening.

Bass is deep and fat, with larger-than-neutral presence especially in the mid-bass section. Depth is more than decent, as it goes down to 30 Hz staying audible and with a somewhat rapid roll-off below that. It’s got enough presence to appear rather muscular, with great physical presence that gives it the right amount of oomph. It is not especially fast so it doesn’t have the “kick” of larger dynamic drivers (e.g. Asura 2.0s), but it is still felt pretty well. It is not really well textured, but details emerge well even with multiple instruments playing at once. You just won’t hear micro-details such as the fingers on bass’ cords. All in all it’s a rather fun and enjoyable bass section that can suit most listeners’ taste.

Midrange appears recessed and a bit distant, with bass and treble surrounding it and leaving it more in the background than what would happen in ideal neutrality. Apart from these general tuning considerations, midrange is presented as lightly U-shaped, with added presence in both the lower and upper areas. It is really neither here nor there, as its tuning combined with its position in the mix makes it sound a bit odd. On top of that, there is a climb at the border with treble that makes some instruments a bit fatiguing (e.g. the synth in Snarky Puppy’s Beep Box). There is enough detail to make it sound there, but it doesn’t sound refined – it’s just enough detail to make one hear the different instruments, but not enough to make each instrument appear as if it was a physical presence. Speed is good, as one would expect from balanced armatures, but has no physicality.

There is a peak at the border between midrange and treble and it is especially felt with instruments such as trumpets – as an example, the trumpet in Stella by Starlight by the Roberto Olzer Quartet. This peak makes this area fatiguing and harsh, although it also adds vividness to the sound. The rest of the treble is, however, well tuned as it shows good extension and general good balance, with some ups and downs that aren’t especially felt. The BGVP DMS are not really super-technical earphones, so detail won’t blow you away; it is still enjoyable and portrays enough to be fully aware of what’s going on.

Here’s a small selection of in-ear headphones to compare the DMS against:

The BGVP DMS are a bit of hit-and-miss. Although they improve on some aspects of their predecessors, they also come with their own set of problems. The tuning is more neutral than the DMG’s, but it has its quirks such as a spike in the upper midrange/lower treble area that can be fatiguing. Their best quality may probably be their soundstage, which is large and even deep, providing an immersion to the music that’s highly unusual in this price bracket. They’re overall enjoyable earphones and a good bang for your buck.