Sometimes changes inside are also reflected by changes outside. That’s true for earphones, too, as demonstrated by the KZ ZS10 Pro. This new version of the ZS10 eschews the old design to adopt that of the KZ ZSN – smaller, lighter, more comfortable – and complements this change with a radically different tuning. This change is for the better – the ZS10 Pro are what the ZS10 should have been.

Disclaimer: Linsoul sent me a unit and I won’t have to return it. They sell it here for $45.

The approach to packaging KZ uses is always the same: a cardboard box with a sleeve on it and a plastic tray which holds the earphones. It’s simple but effective. You can find a few pictures in the related Headphones in Pictures article. 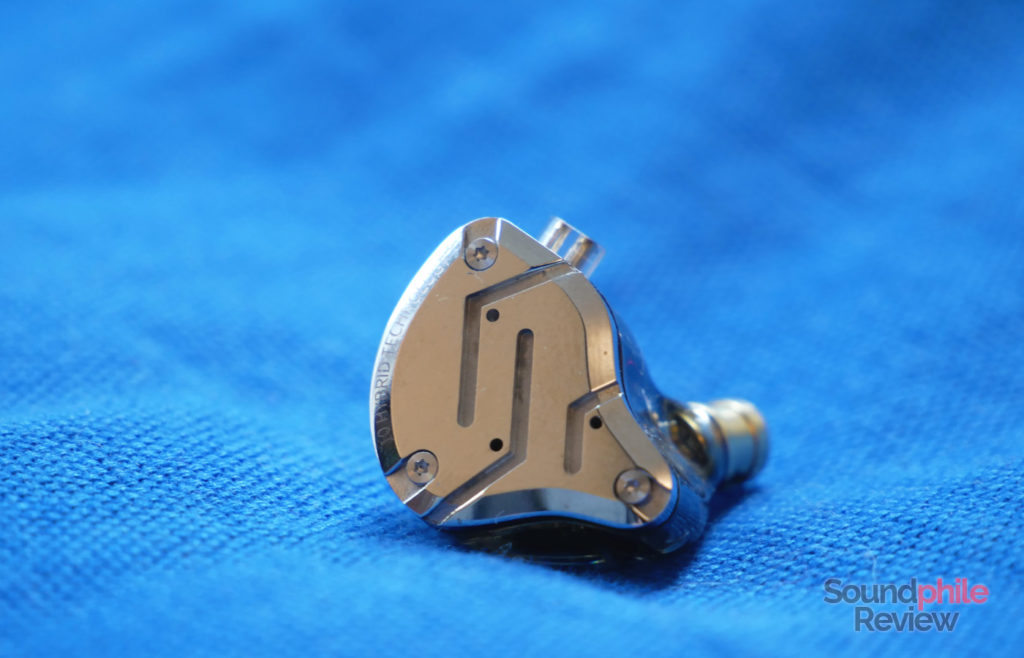 As I have mentioned, the KZ ZS10 Pro use the same design as the KZ ZSN: there are just minor differences, such as the metal faceplate being shinier. Everything else is practically identical. And that’s a good thing: this design is effective and practical, it offers good comfort and it’s also good looking without being gaudy. The shells are made of transparent plastic, while the nozzles and the faceplates are made of metal. 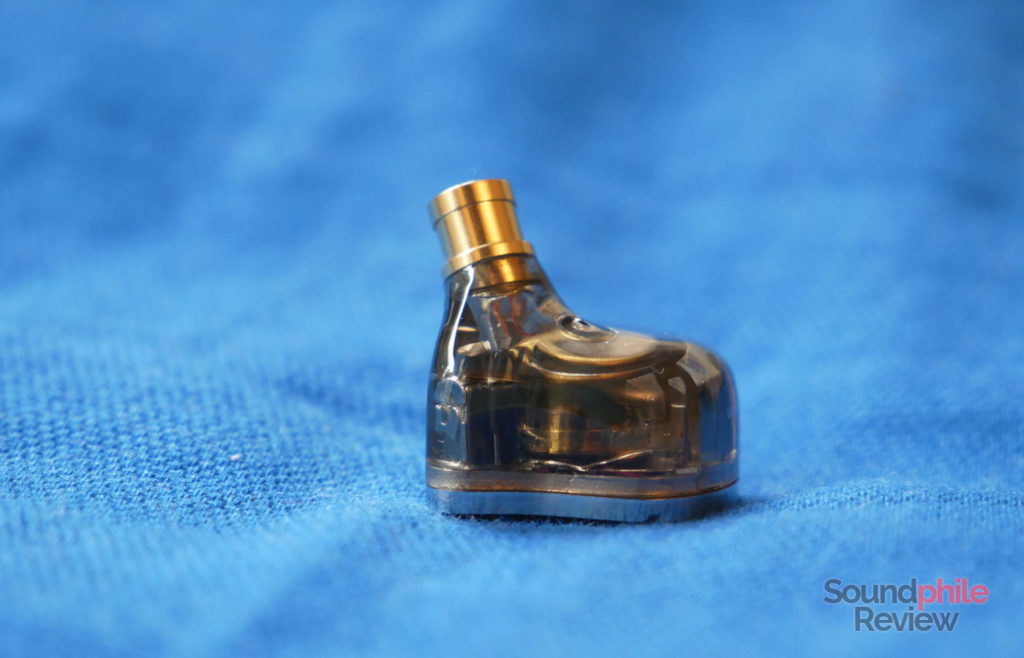 Build quality is the one we’ve come to expect from KZ: good, yet not exceptional, with decent materials and decent assembly quality. The earphones feel sufficiently resistant and durable, especially for the price.

Even when using them for multiple hours, the KZ ZS10 Pro prove comfortable and devoid of fatigue on the ears. While everyone has different ears and therefore comfort is a subjective experience, the ZS10 Pro should be comfortable to a lot of people due to the way they are shaped. 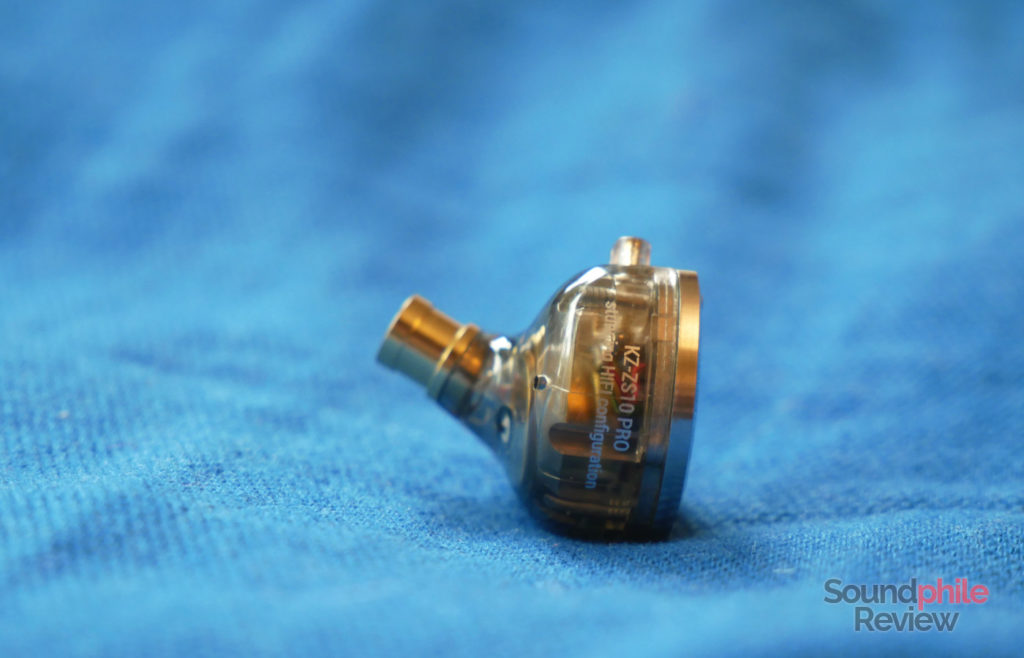 Irrespective of what eartips one chooses to wear, the ZS10 Pro do not offer much isolation. They do reduce the volume of outside noise, but limitedly so. In noisy situations they can only remove the quieter sounds, while the louder ones will get in anyway – the subway won’t be much quieter.

The cable is the usual one from KZ – not really good, but not really bad either. It’s a bit flimsy and made of four cores (one group of two for each channel)

I tested the KZ ZS10 Pro using a Burson Audio Playmate while at the desk, and an iFi xDSD and a Shanling M2X while on the move. Music came from FLAC files, most of which were in standard 16 bit / 44.1 kHz resolution.

The KZ ZS10 Pro is related to the original ZS10 in that it has a hybrid driver setup: it uses one dynamic driver and four balanced armatures per channel. Thanks to their low impedance and high sensitivity they do not require any amplification.

KZ seems to be playing a different game lately: they are paying more attention to tuning and they’re creating earphones that are more balanced and don’t have the notorious peaks many KZ earphones from the past were famous for. The KZ ZS10 Pro luckily follow this new course, with a well balanced signature that’s not neutral, having some emphasis on bass and treble, but which is completely enjoyable and fatigue-free.

The ZS10 Pro have surprisingly good technical ability. The soundstage is decently large, but more importantly it has some depth which allows for some layering of the instruments and 3D positioning which improves immersivity. Imaging is the most surprising aspect, as it places instruments on the whole stage with good accuracy. They sound like they are in different points in space, which is something even much more expensive earphones can’t always achieve. Instrument separation is also very good and allows to distinguish instruments with more than sufficient clarity.

Bass is usually turned to eleven on KZ earphones, but in this case it is nicely emphasised without excesses. Bass is in fact a bit abundant, but it’s never bloated or aggressive, so it stays in check and blends nicely with the rest of the sound, without ever covering the mids. As it is most present in the mid-bass section, it gives sound a warmer appearance. There is sufficient detail so that lows appear well textured, with enough control to let multiple instruments sound at the same time. It’s physical enough, though it does not have blistering speed.

Midrange has some warmth to it, with the lower range being slightly emphasised and giving more body to the sound. Despite this, mids sound balanced and coherent, with all instruments sounding well. This is not one of those cases where warmth takes from the sound, making more high-pitched instruments sound flat and dull; on the contrary, it only adds to the sound without taking anything from it. The good coherence of the mids makes them sound pleasant and well-rounded, with both male and female vocals sounding good. There’s a good level of detail, actually better than expected. As mids is reproduced by the balanced armatures, it has decent speed but it is not physical.

Treble is a bit emphasised in the lower range, and that’s it. Luckily KZ managed to tame their notoriously piercing highs and got a highly likeable, balanced enough higher range as a result. Extension is not its strongest point, being somewhat limited, but it is sufficient to lend some air to the sound. Detail is the good thing about the treble here, as there is enough to make smaller details pop out of the mix. Micro-details are simply not there, but the performance is really good anyway – especially one we factor the price in.

All in all the KZ ZS10 Pro are well-rounded earphones which can play almost any genre.

Here’s a few comparisons with other earphones:

The ZS10 Pro is arguably one of the best earphones KZ ever made. They really stand out from KZ’s production, and in general they appear to be a good choice for anyone looking for an affordable pair of IEMs with enough balance to correctly reproduce most genres. They’re not the Holy Grail of cheap earphones, but they really are likeable and they’re a good compromise between an analytic, “cold” and “boring” sound and a more fun-orientated sound. The proverbial cherry on top is a very good technical ability which pairs great soundstage representation with very good imaging. Good job, KZ, you’ve really nailed it this time.