You may think that the CCA C10 are similar to other earphones you’ve seen in the past… and you would be right. The C10 use the same shell as other KZ models such as the KZ ZSN and the KZ ZS10 Pro. They’re exactly the same and they use the same exact configuration of drivers, too (for obvious reasons). The only significant difference in terms of design is the fact that the metal faceplate features some “waves” with the CCA logo on it. No other real difference is present as far as the shells are concerned. Sound is another matter, though!

Disclaimer: I received the CCA C10 from Lillian at Linsoul. The earphones are on sale on their online store at ~$40. 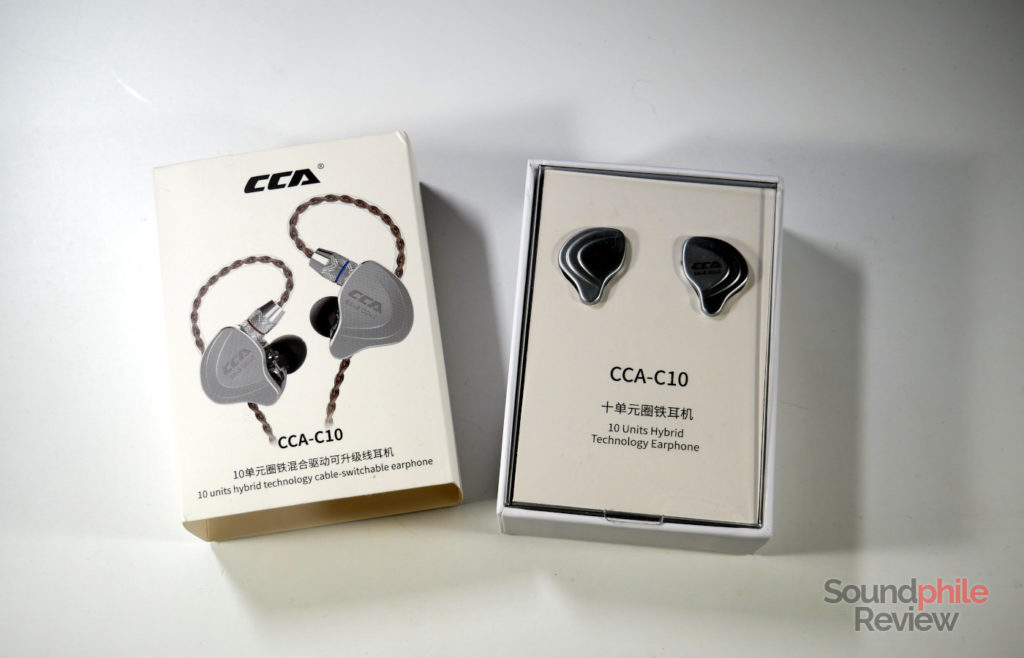 Giuseppe Tomasi di Lampedusa wrote in its masterpiece novel The Leopard that “everything has to change in order for nothing to change”. Well, it seems like KZ didn’t get the memo, so they just keep with their usual packaging. Not that it’s a bad thing, actually, as it’s a utilitarian packaging that serves its purpose and I guess that it plays a role in keeping the price down (and it’s also easily recyclable). So, inside the box are the earphones with their cable plus a set of eartips. 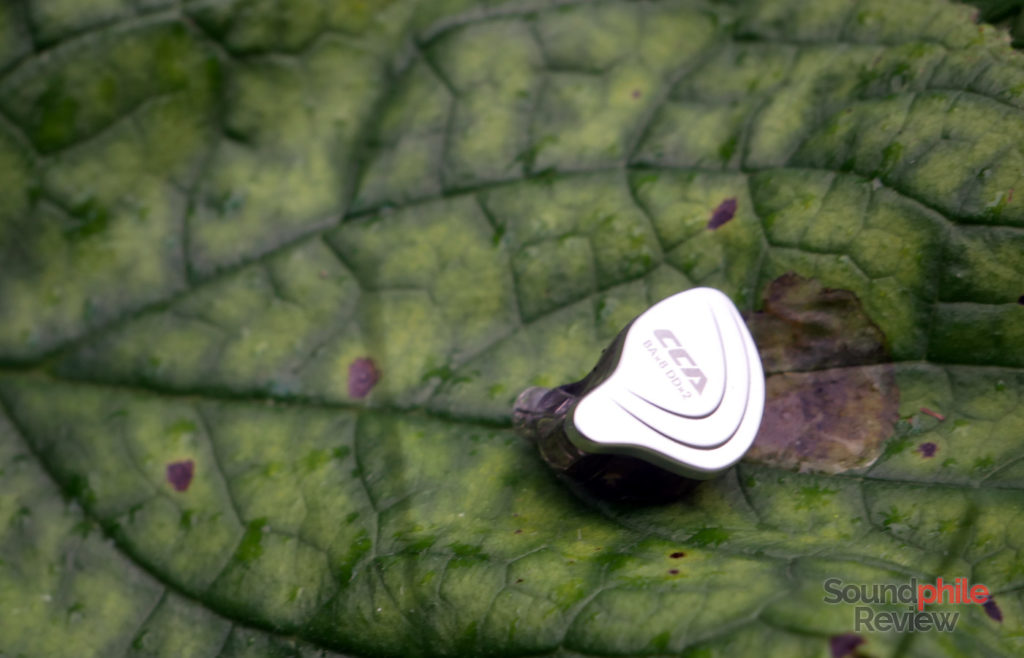 One of the tenets of software development is to reuse code whenever that’s convenient and possible. While that leads to disasters sometimes (hi, Ariane V!), it often works. That seems to be true for earphones, too, as the CCA C10 are the umpteenth reuse of the KZ ZSN shell. In fact there are almost no differences, as the only thing that’s not the same is the metallic faceplate: it has “waves” on it instead of machined patterns. 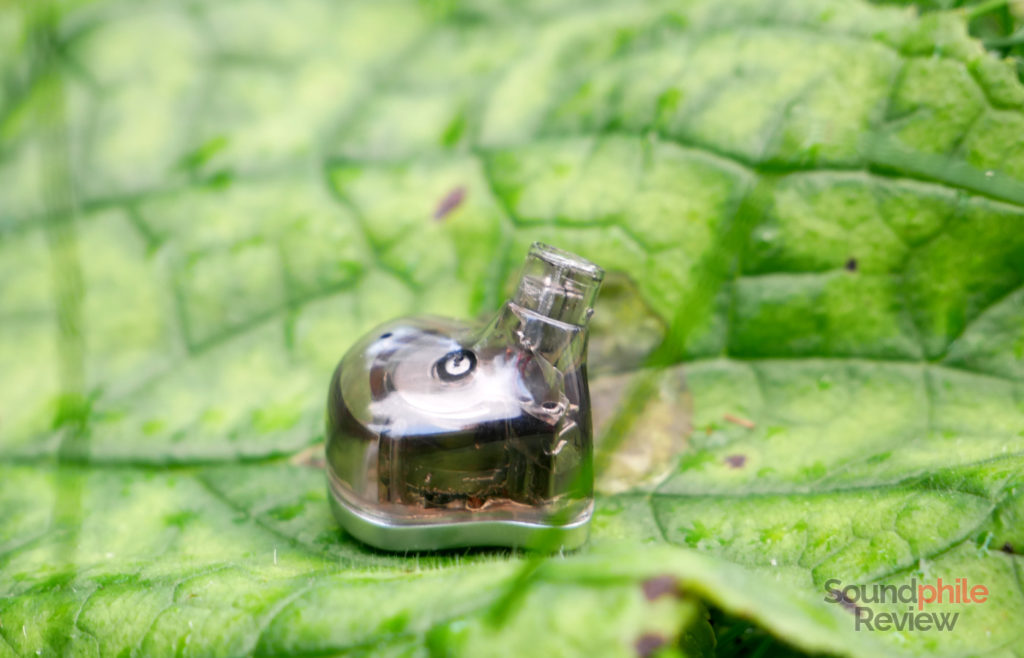 This reuse of the shell is actually a good thing, as this shell is a comfortable one. The C10 are probably among the most comfortable earphones I’ve tried so far. I can wear them for long amounts of time (even the whole day!) and still not feel any fatigue or discomfort. 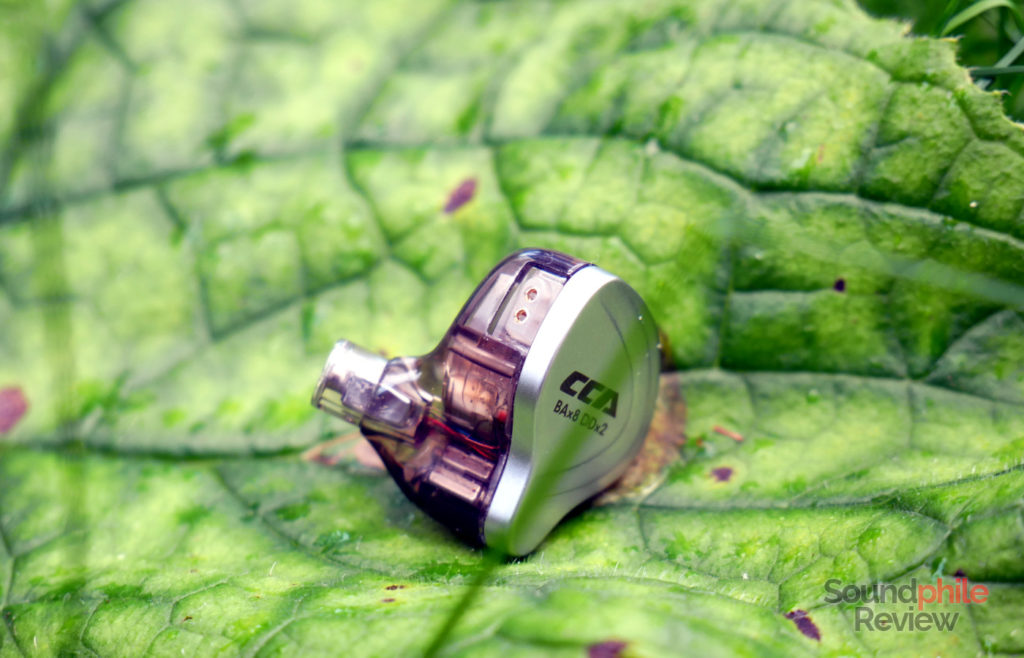 Even when using foam tips, the CCA C10 aren’t able to give you much isolation. At best, they can only slightly reduce background noise when it’s not too strong. High-volume noise, such as heavy traffic, cannot be blocked by the earphones. 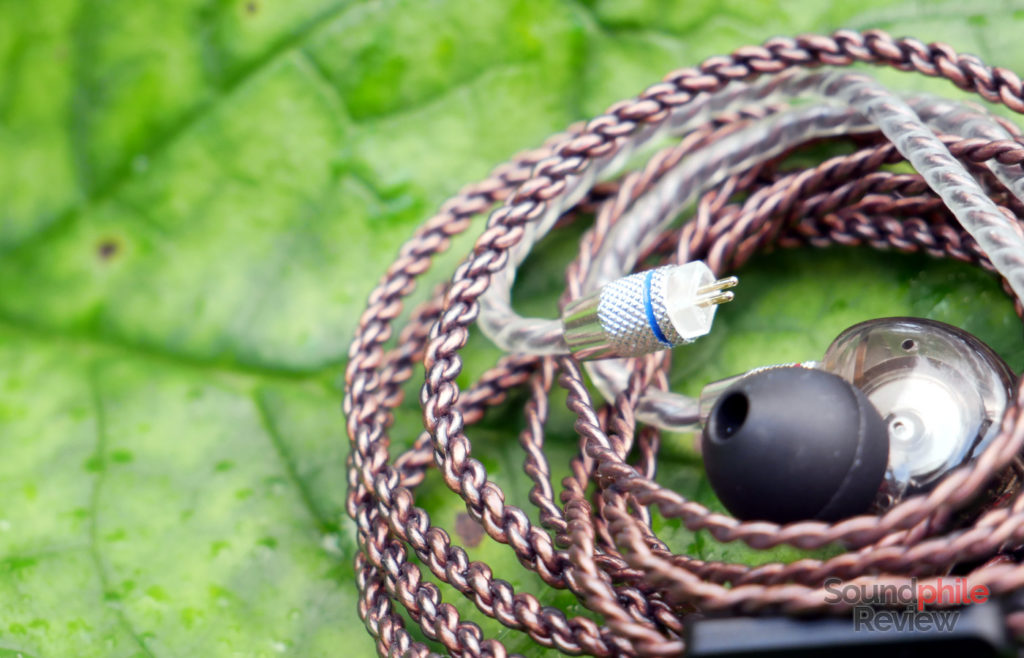 The other difference between the C10 and the ZSN is in the 2-pin connector, which has like a recessed frame – it bulges out from its surroundings, so the cable connector has to have a part that fits in this area (you can see that in the picture above). The C10’s cable is similar to those used by KZ and, more specifically, to KZ’s silver-plated cable. It is in fact almost identical, save for the brown colour of the plastic sleeving.

In order to write this review I used a Topping DX7, an iBasso DC02 and an xDuoo X10T II coupled with an xDuoo XD-10 Poke as sources. Music files were mostly standard-res (16 bit / 44.1 kHz) FLAC files.

Soundstage is flat, but relatively wide. It has good lateral extension, but little depth, which makes music sound in your ears instead of something playing in a three-dimensional space. Imaging is more than decent as it places instruments in a variety of places and not just in the triptych left-centre-right. Instrument separation is probably the strongest point in the C10’s offering as the earphones are able to separate instruments well even in crowded tracks.

Bass is powerful and gives the sound a warmer tone as it is more than in an ideal neutrality. While it’s not obnoxious, its presence is certainly not something one can ignore. Luckily it rarely covers the mids, so I would not describe it as “excessive”. It’s actually fun and I would say that it adds to the music without taking anything away (though it depends heavily on what music you listen to). In line with expectations from a dynamic driver, bass has a bit of physicality, so you actually feel it when there are drums or other similar instruments. Speed is good enough and allows for a bit of detail to come out – though detail becomes lower the more instruments are involved.

Midrange appears to be a bit V-shaped, with the central area which is a bit recessed compared to the rest. Lower and upper areas stand out, and as a result male voices appear warm and female voices bright, but the coherence is not great as one can hear this emphasis. It is good with instruments such as electric guitars or violins, but less so with voices – as an example, Led Zeppelin’s The Battle of Evermore shows voices having very different emphases even though they should be more-or-less equal. Detail is good, though not exceptional. What I found to be especially good is speed: the CCA C10 are able to deliver good physicality with drums and other percussions or plucked instruments.

Treble is not much extended and it also has a relatively low level of detail. Because of the low extension and of the presence of a peak in the lower area, it often appears a little less present than it should, although it is as often in the front of the stage. In general it’s likeable as it is easy on the ears despite the peak. It isn’t super sparkling nor airy, but it is enjoyable nonetheless as it stays vivid enough.

Let’s compare the CCA C10 to other headphones in a similar price range:

The CCA C10 are attractive and for the price they’re sold at, they’re rather good. They’re not devoid of criticism and they’re actually better suited for modern genres that require additional bass kick, but at less than $40 they’re almost a steal. They have good technical ability and they’re comfortable. To me that’s enough!