Some matches are made in heaven, and some are made in the design phase. The xDuoo XD-10 Poke is a small protable amp made to pair with xDuoo’s and Sony’s line of DAPs thanks to the similar size, though it is one of those little amplifiers which can be paired with practically anything on the market including phones, tablets, laptops and desktops. Its small aluminium shell hides a device with enough power to drive most headphones and enough options to make it useful in many different situations – not only on the go, but also at the desk. It’s a practical external sound card for your laptop or desktop and a great companion for your phone or tablet.

Disclaimer: I received the xDuoo XD-10 Poke from Steven at Xtenik. They sell it on their website at $250. There’s additional info on xDuoo’s website.

You can take a look at the related Out of the Box article, but the package contains a host of accessories which include a USB to micro-USB cable, a USB to USB cable (more on that later) and three short cables to connect the XD-10 Poke to mobile sources which have a female USB connector on one side and micro-USB, USB Type-C and Walkman connectors on the other. There’s also an adhesive gel pad one can use to keep the XD-10 Poke and the source device together. 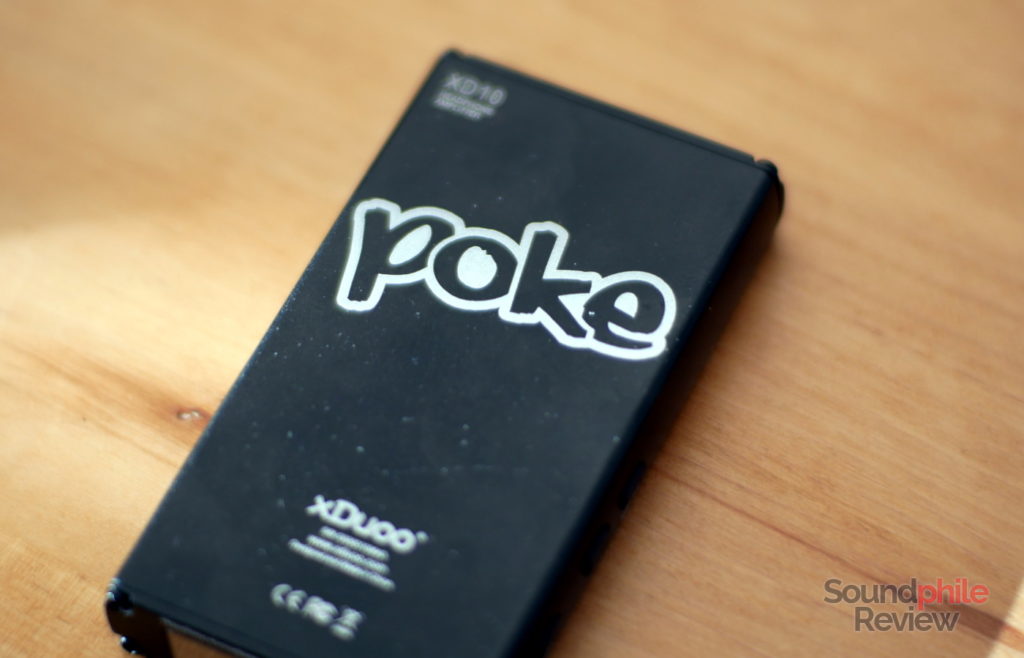 The xDuoo XD-10 Poke is the smaller brother to the xDuoo XD-05 and takes a few elements from it: the front screen is an example of that. It is really different in general, as it is much smaller. The XD-10 Poke is more akin to the xDuoo X3-II and the other X-series DAPs in terms of pure design and size: it is a parallelepiped coloured either black or bright blue, with the same slightly curved sides. 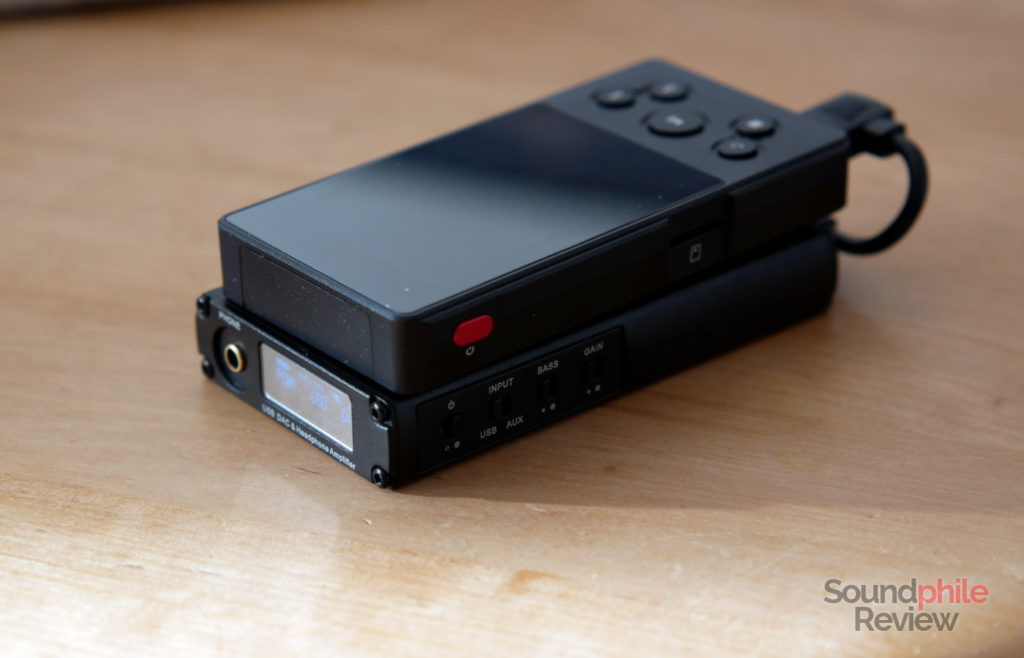 The front hosts the 3.5 mm output jack and the screen; on the right side are the power switch (it’s not a button, but a switch one has to move similar to the iPhone’s ring switch), the input selector (with options to select either USB or aux), the bass boost switch and the gain selector; the left side is where we find the volume buttons and the filter button which allows to cycle through the different filters. On the back are the micro-USB port for charging, the status LED, a full-size male USB connector and a 3.5 mm jack for aux input. Alas the charging happens through micro-USB instead of the more modern (and increasingly widespread) USB Type-C. 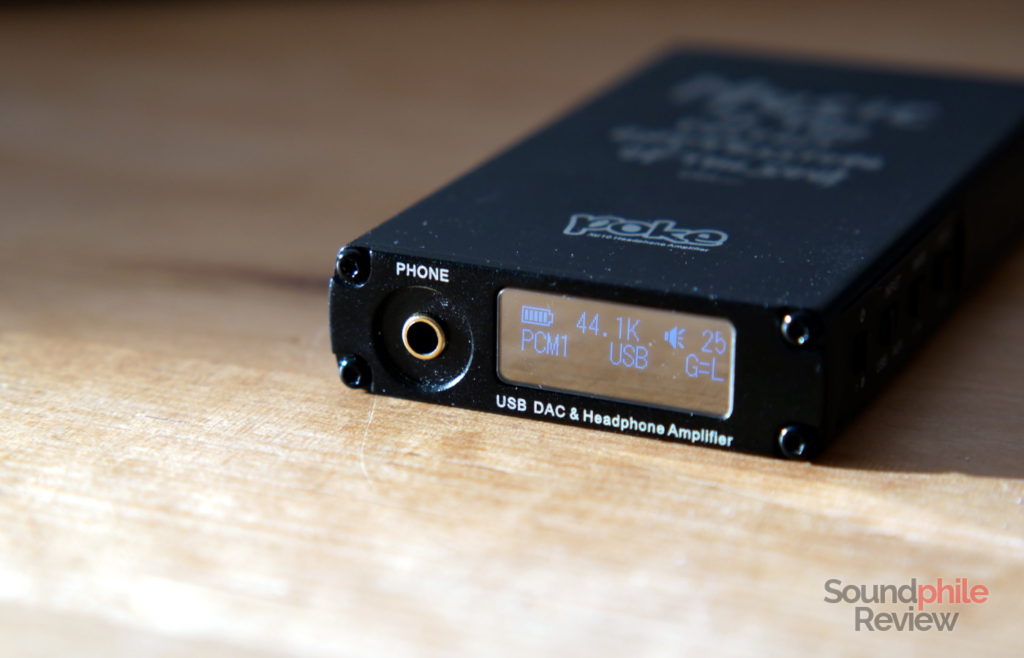 The chassis is made of aluminium in all its three parts: front, main section and back. Even the switches are made of aluminium! Build quality is good and the only element that could be better is the screen, not because of any faults of its own but because it is prone to scratches and it’s not covered by a plastic protector that could prevent or reduce possible damage.

The screen shows current battery level, input being used and its type (e.g. PCM 44.1 kHz) and active filter. It’s small, yet it has all the information one needs. Brightness is probably its Achilles’ heel, as it’s limited, and it also can’t be turned off to save some power. 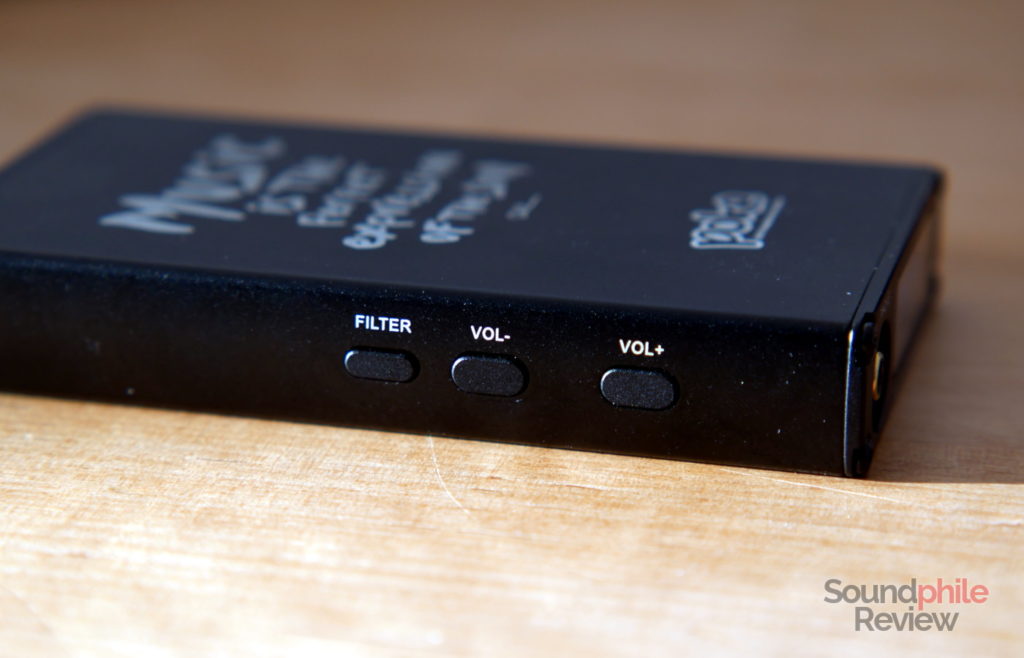 In terms of input and output options, the xDuoo XD-10 Poke is a bit limited. It can only use USB and aux inputs, and it only has headphone output and line out. It’s really minimal in its features. It seems to be limited as it was made to be paired with Sony Walkman devices, which only support USB output and have no optical or coaxial output.

Volume is adjusted in discrete steps ranging from 0 to 120. Granularity is fine enough for each step to be small even when using sensitive earphones, so I did not miss an analogue volume knob too much. The only issue is that sometimes a single press is registered as two, but it’s rare enough not to be too much of an issue. Although volume is controlled digitally, it is then adjusted in the analogue domain thanks to a TI PGA2311 which uses resistors to control volume with channel matching within 0.05%. 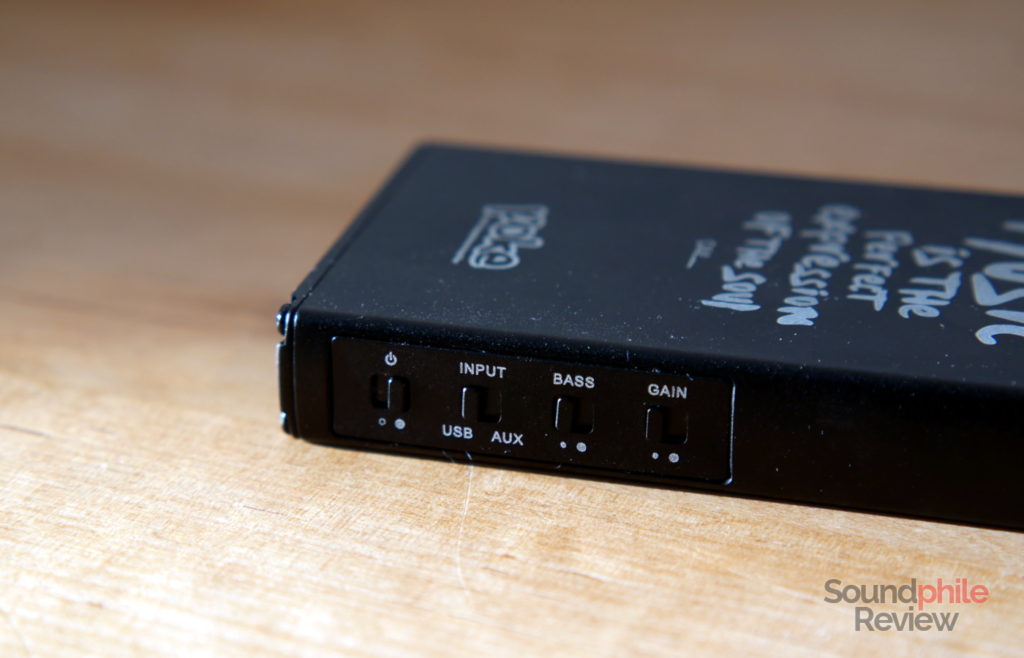 Compatibility with the various formats is really good: the XD-10 Poke supports PCM streams up to 32 bit /384 kHz, and it also supports up to DSD256 and DXD in 32 bit / 252.8 kHz. Despite its small size, it is really capable on this front.

Inside the xDuoo XD-10 Poke is an AKM AK4490 DAC coupled with a TI OPA1622 amplifier. The USB controller is the XMOS XS1-U8A-64 and there are two crystal oscillators, one for 44.1 kHz and one for 48 kHz (and respective multiples) which should allow for greater precision and less distortion.

The XD-10 Poke does not offer enough power to drive headphones with high impedance or especially-low sensitivity. I tried to drive the Sennheiser HD 6XX with the XD-10 Poke and the result was that volume was low even at the highest setting, but on top of that bass was anaemic and recessed. With easier-to-drive headphones things are much better: I would say that the upper limit is around 120 Ω if one wants to get something really good.

There are various filters (four PCM filters, four DSD filters), but telling the difference between them is hard work. If there are any differences between them, they’re so small I can’t really hear them. 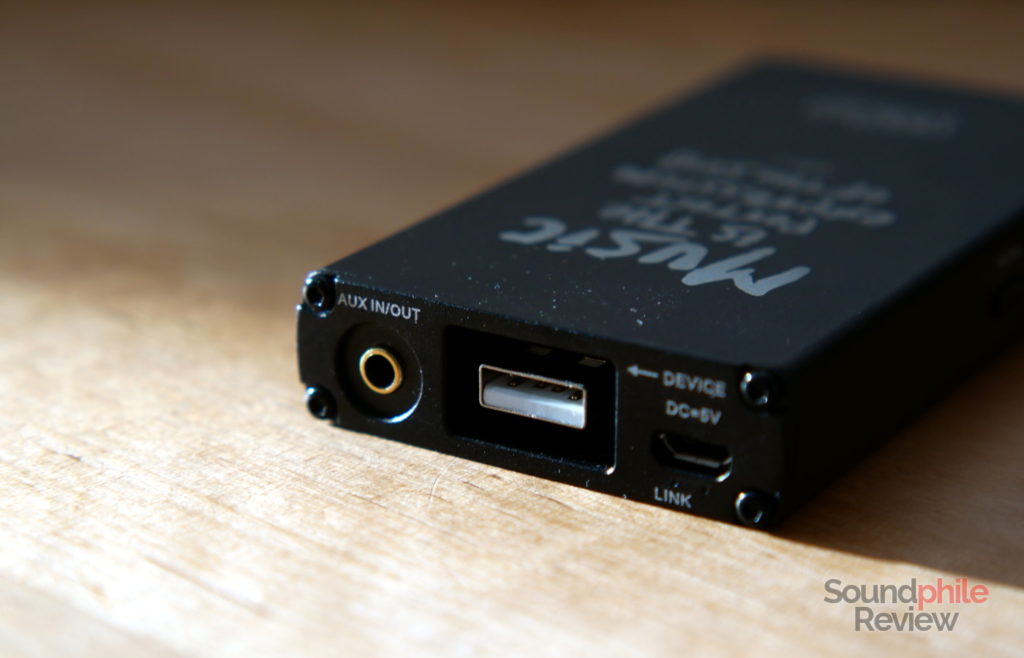 I don’t know if my unit is defective, but it acts strangely. The battery lasts for about 7 hours in DAC mode, but when the indicator gets down to about 25% charge it takes roughly half an hour before it is drained. When that happens, the XD-10 Poke continuously powers off and back on, with audible clicks every time that happens. It seems like there is either some issue with my unit or with the design. Either way, battery life is decent but definitely not stellar despite the large 3,700 mAh battery.

There’s a good thing, though: as I mentioned, the battery charges through the micro-USB port, which means that as long as you use the xDuoo XD-10 Poke with the full-size USB cable you won’t be draining power from the device it is attached to. That makes it ideal for use with DAPs, smartphones and other battery-powered devices.

As the device has power switch instead of a power button, it can’t turn off automatically. It has to be powered off manually. If you forget to turn it off, it will drain the battery!

I tested the xDuoo XD-10 Poke using a Fearless Audio S10 Genie, a Moondrop A8, a Venture Electronics Asura 2.0s and a Sennheiser HD 6XX. I connected it to a xDuoo X10T II and to my PC.

Alas the background is grey instead of black: there’s some noise that’s always present and that emerges clearly when using sensitive earphones or when tracks are low-volume or in moments of silence. An attenuator of some kind (e.g. iFi Ear Buddy) is required if you want to use sensitive IEMs to cover the background noise.

The gain selector on the right side can be set to either 0 dB or 6 dB. The lower setting is useful with low-impedance or high-sensitivity headphones, while the higher one is recommended in other cases even though it won’t help too much with especially hard-to-drive headphones as I wrote previously.

The sound is punchy and dynamic: there’s a very good dynamic range which is coupled with very fast transients which make music appear vivid and tight. By that I mean that notes appear to be more immediate and faster than on other sources I’ve tried, so they’ don’t drag on longer than they should – they seem faster. It’s especially noticeable with highs, that appear a bit more prominent, but also with bass. The result is that detail appear better defined. Although I can’t hear any specific colouration of any significance, there seems to be a bit more sparkle and vividness than usual.

The bass boost feature is powerful and really takes bass to new heights, giving it much more presence  up to the border with lower midrange. There’s a bit more emphasis in the middle range, so the boost is actually “bumpy”, but it’s not extreme. It is really noticeable and can become excessive if the headphones already have a strong bass presence, but it’s otherwise a good way to add some strength to bass.

Although the XD-10 Poke is quite good, competition seems to be able to do better. The Topping NX4 DSD is smaller, yet it offers more in every department even though it costs $100 less! The only thing the XD-10 Poke does better is volume control. The iFi xCAN is just $50 more but it offers four times the output power, balanced output and Bluetooth connection. It’s a no-brainer. As for sound, there is not much difference in terms of tuning, so I’d say that they’re interchangeable.

I can only recommend the XD-10 Poke only if you own a Sony Walkman DAP or a xDuoo X10T II, or if you want a smaller device than the other two (though the NX4 DSD is slightly slimmer).

What the xDuoo XD-10 Poke mainly offers is convenience. It does not offer lots of power, nor an especially long battery life, nor a lots of input or output options. What it offers is the convenience of a small device that can easily improve the audio output of computers, smartphones and tablets using a standard port that makes it really easy to use it. It has its flaws, but they’re not really glaring. It’s a good device and I love its form factor, the various options it offers (gain and bass boost) and the screen, but its price is sadly higher than the competition all features being equal.

Out of the box: Lindemann Limetree Network