Korean company Radsone became famous due to their first product in the EarStudio line, the ES100. This diminutive device has long been one of the go-to Bluetooth adapters in the audiophile world (expect a review soon!). The company has now decided to venture in the world of headphones and has done so with the EarStudio HE100. They’re in-ear headphones with a small footprint, a simple design and a few features for the modern user.

Disclaimer: I received this unit for free from Radsone – thank you Emily! You can find additional info on their website. They retail for $89. 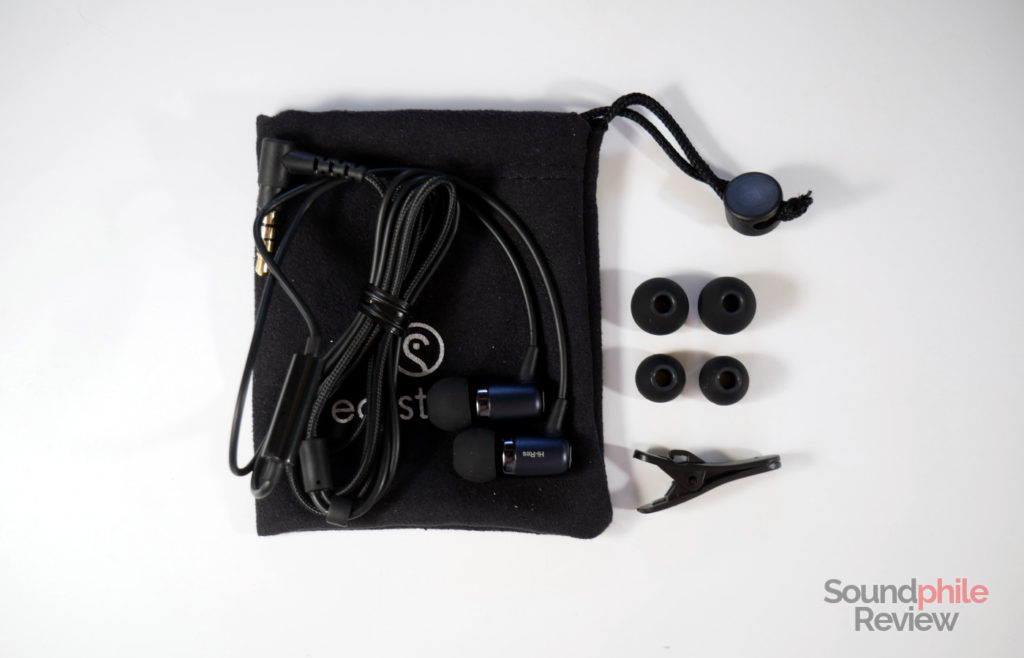 The simple cardboard box comes with the earphones, a set of three sizes of eartips, a cable clip and a fabric bag to store the earphones in. The accessory set is simple, yet very good for the price. 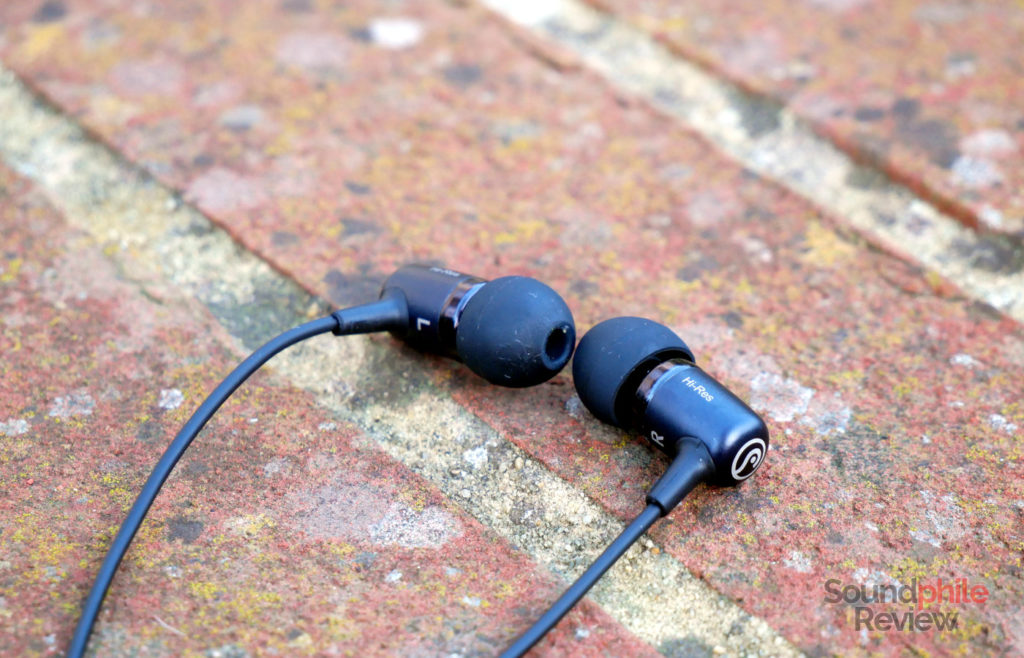 The EarStudio HE100 earphones are traditional in their design in more than one way. Shells have a rounded bullet-like shape which really favours comfort. They’re small, so much so that they fit in my girlfriend’s really small ears. They are made for deep insertion, as the stem on the end of the shell suggests. The strain relief is made of rubber and is relatively soft, so it should be able to effectively relieve of any stress on the cord. The shells are dark blue – it’s so dark it’s almost black – and they’re made of aluminium, whereas the nozzle is made of glossy black plastic.

The EarStudio HE100 appear to be well-made, though they don’t feel especially solid. I guess it’s a matter of feeling more than of factual build quality, but they feel like they are $30 earphones. That’s not only due to the quality of the finish, but also due to the way the materials look. The similarly-priced 1More Triple Driver are much, much better in this regard. Again, though, it’s a matter of impression rather than of actual issues with quality. 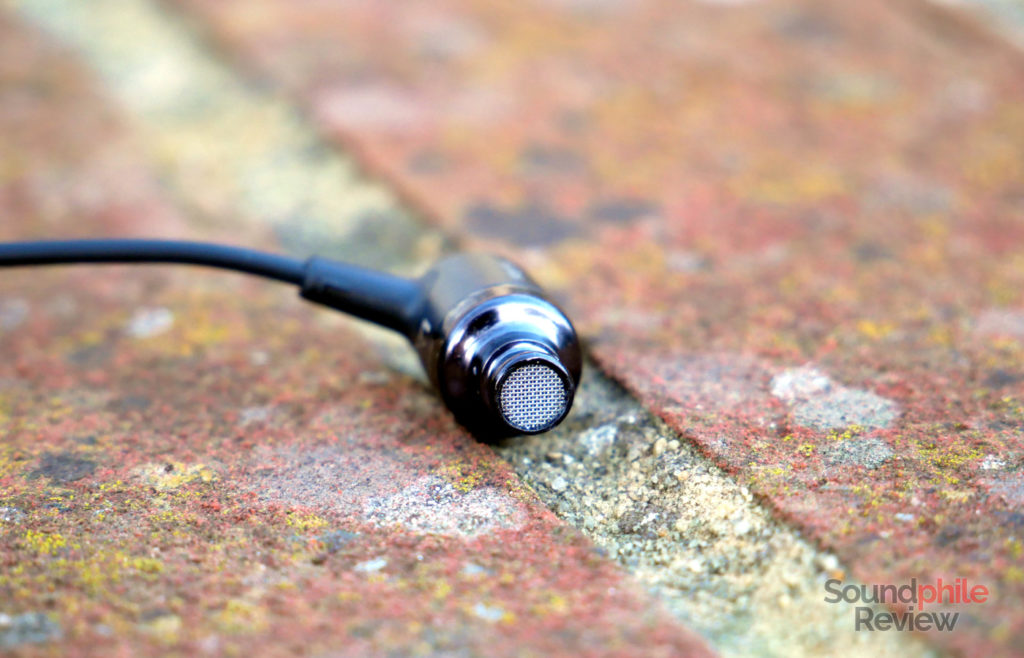 Isolation is, simply put, terrible. Even using foam tips or the large silicone tips included with the earphones, which completely seal my ear canal, they offer little isolation. They’re not really great to use in noisy environments (e.g. public transport, busy streets), but in relatively-low-noise environments they’re fine.

Comfort is just great. Whether I wear them with the cable dangling or around the ears, they can stay in my ears for hours with very little fatigue. They are really comfortable to me and they’re probably going to be for most other people, too, as their simple, rounded and – in particular – small shape makes them nearly universal. 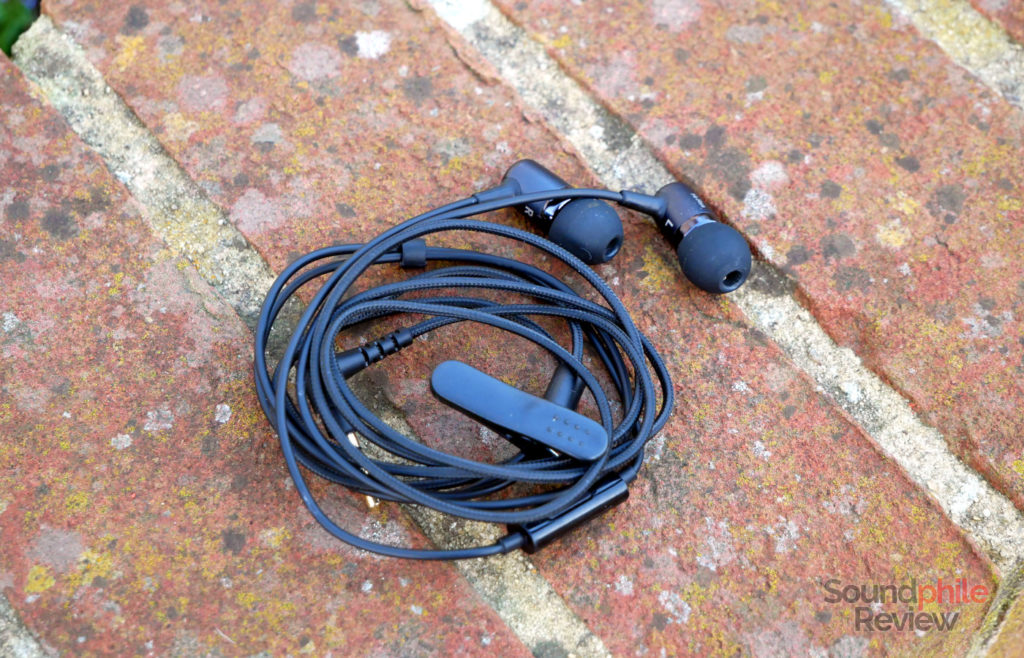 Contrary to the vast majority of earphones in this price range coming from China nowadays, the cable is not removable. It has a fabric sleeving from the right-angled jack up to the Y-split, and then it’s just plastic. It is relatively stiff, and by that I mean that it tends to keep the shape it is given – even after a few weeks of use it still has the kinks that were caused by how it was stored in the box. It appears decently well-made, but it also gives me the feeling of something that’s a bit cheap. That’s caused by the plastic sleeve, which looks and feels like that of cheap headphones. The stiffness also causes a lo of microphonics to be present.one of the solutions I found is to make the cable run over the ears, though this makes the microphone stay in a non-ideal position.

The Rasone EarStudio HE100 feature an in-line remote with a microphone on it. The remote has a single button which one can use to manage calls or music playback. Due to this, volume has to be adjusted from the source device. The microphone works really well.

I used a Burson Audio Playmate as the source while I was at my desk (using an iFi IEMatch), plus a Shanling M2X and an EarStudio ES100 while on the move. Source files were mostly FLACs in standard resolution (16 bit / 44.1 kHz).

Inside the shell of the EarStudio HE100 is a single dynamic driver – this is not the usual hybrid. Radsone does not disclose the diameter of the driver, but considering the size of the shell I expect it to be in the 5-6 mm range.

The EarStudio HE100 have an interesting tuning with an abundance of sub-bass notes (despite the small size!) and an accentuated upper midrange/lower treble. It’s not V-shaped as in the common meaning, as that usually entails a stronger midbass, but they’re close to that. What’s interesting is that they keep things balanced enough.

Soundstage is relatively wide, with a hint of depth, though it often feels like music is inside the head instead of outside of it – a common issue with IEMs. Imaging is good and places instruments on the stage with relative accuracy. Instrument separation, on the other hand, could be better as there is often a bit of mash-up that smears details.

Despite the small size of the driver and the price range the HE100 are in, the bass area has a strong prevalence of sub-bass. This emphasis is such that one hears the lowest notes more than the others, but not to the extent of the former being overbearing and overshadowing the latter. On one hand this sub-bass prevalence gives a more full-bodied character to the sound, which appears fuller and deeper, but on the other hand it also makes it darker than usual. Not that it’s a bad thing – some genres require just that (e.g. trip-hop, drum and bass, etc). In general, bass is not over-abundant and sits more-or-less in the right place, with just a bit of additional emphasis. Control is good and so is detail. Speed is also enjoyably fast, with good attack and fast-but-not-too-fast decay. Surprisingly, bass is not really physical, so percussions and other similar instruments do not have that “kick” many crave for.

Midrange is slightly recessed, encased between bass on one side and upper midrange and lower treble on the other. Upper midrange in fact emerges clearly from the mix, whereas the rest of the midrange is somewhat overshadowed by the frequencies above. Midrange surely has a bright tuning! This emphasis is really discreet, though, so it doesn’t make the sound excessively bright nor fatiguing, though it adds a bit of sibilance. In terms of detail it is good, though the instruments are not as well separated as more crowded tracks would require to make details shine. Speed is also good, though – again – there is not much physicality.

Treble has its peak in the lower area, with a slow roll-off that leads to a good extension. The company flaunts extension up to 40 kHz, but as I am not a bat I can’t confirm nor deny that claim (nor say it is debatable at all. I’ll see myself out, thank you.). Treble is actually more than decently detailed, though more crowded tracks will put it to the test and expose the limits of the drivers: as a practical example, Celtic Frost’s Progeny has cymbals and snares which lose definition when all instruments are playing. In more “relaxed” tracks, though, one can appreciate the high level of detail of the treble area. There’s also no significant peak, so no harshness or fatigue are to be found.

Shall we compare the EarStudio HE100 to other in-ear headphones? Yup! Here’s a small list: