Shanling‘s ever-expanding roster of products recently got bigger with the introduction of the Shanling ME80: they’re in-ear headphones targeting the sub-$100 price range with a single dynamic driver and Shanling’s bright, airy signature. They’re very competent earphones for the price – and they’re incredibly comfortable, too.

Disclaimer: I would like to extend my thanks to Frankie at Shanling for providing this unit for free. More information is available on the official website. 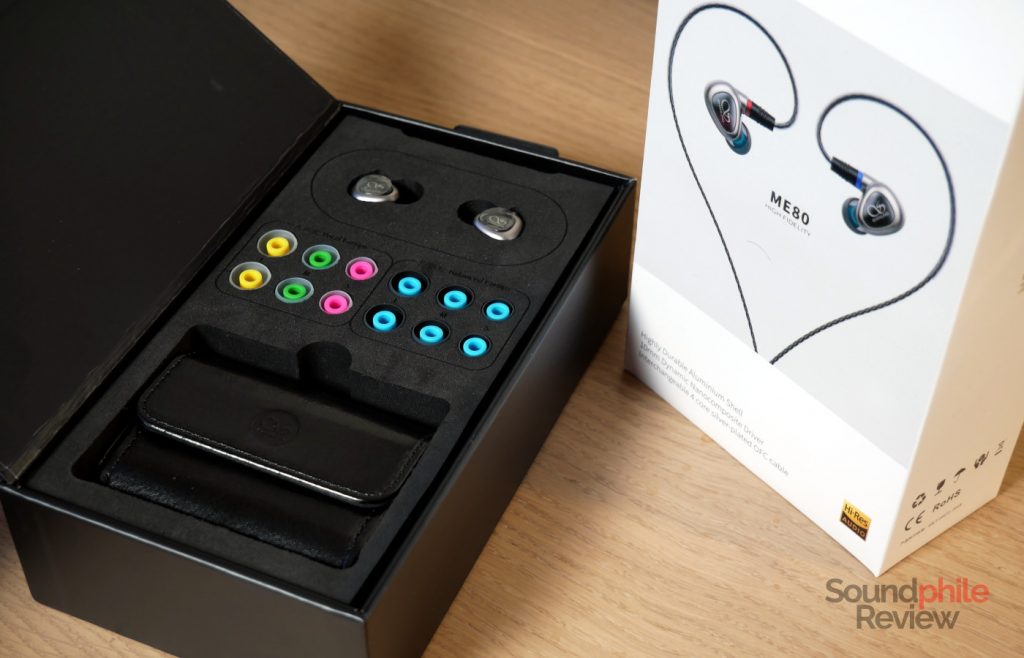 As in the best Sanling tradition, the ME80 offer quite the unboxing experience. It’s not about the packaging itself: it’s about the accessories. Despite being less than $100, the ME80 include six different pairs of eartips, a cleaning brush and a faux leather case. That’s quite the accessory set! 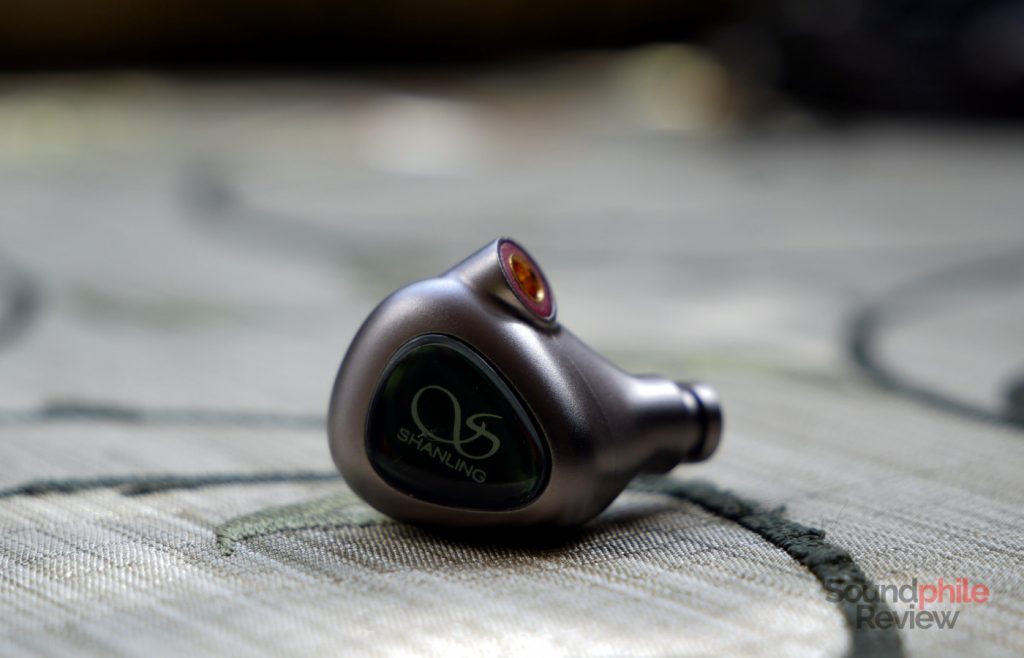 The design of the Shanling ME80 is quite close to that of the ME500 Platinum Edition which I reviewed a couple of years ago. The shells are, in fact, almost identical, but with a few key differences: the ME80 are smaller and with a matte finish. They are triangular in shape, with a smaller triangle bearing the Shanling logo. The body is made of aluminium with a sandblasted and anodised finish that makes it very smooth, while the faceplate is seemingly made of glass. Overall the ME80 look quite classy and understated.

The nozzle has a decently large lip to better hold the eartips and it does so successfully. It is also slightly angled and that helps with comfort. Build quality is, as in Shanling’s tradition, top-notch. The shells are made of two pieces, with the seam between them barely visible. Overall they look and feel much more premium than their price would suggest. 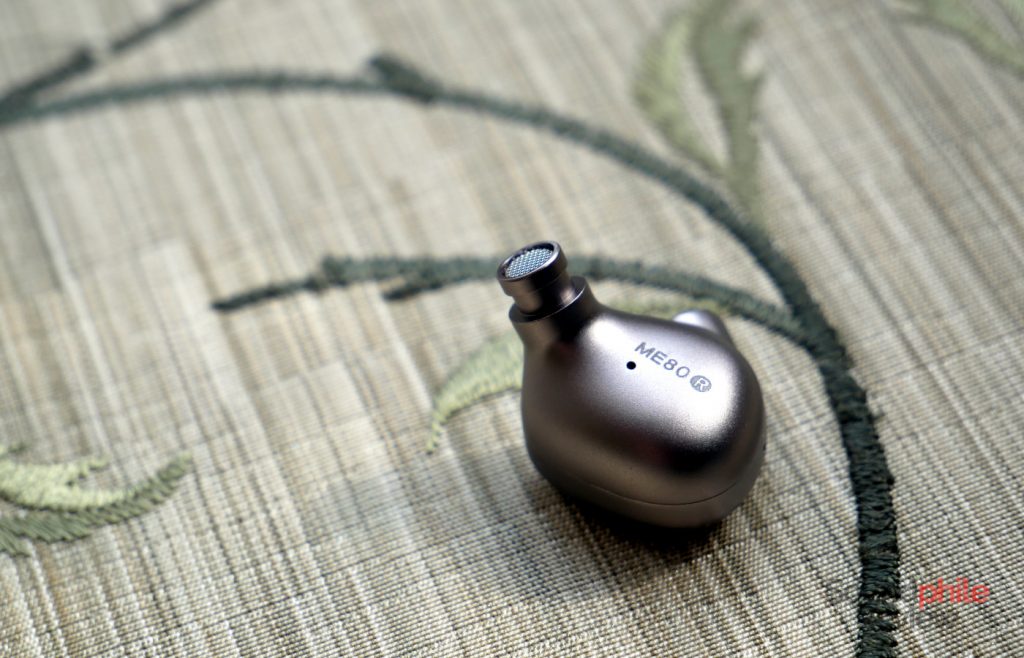 Comfort is stellar. I’ve been wearing the ME80 for hours without even so much as feeling them inside my ears. I put them on and they just disappear. That’s quite an achievement, as their small size and rounded shape means that even people with smaller ears will be able to wear them without issues. This is a very personal matter, of course, so your mileage may vary, but in general I think these might be among the most comfortable earphones on the market. 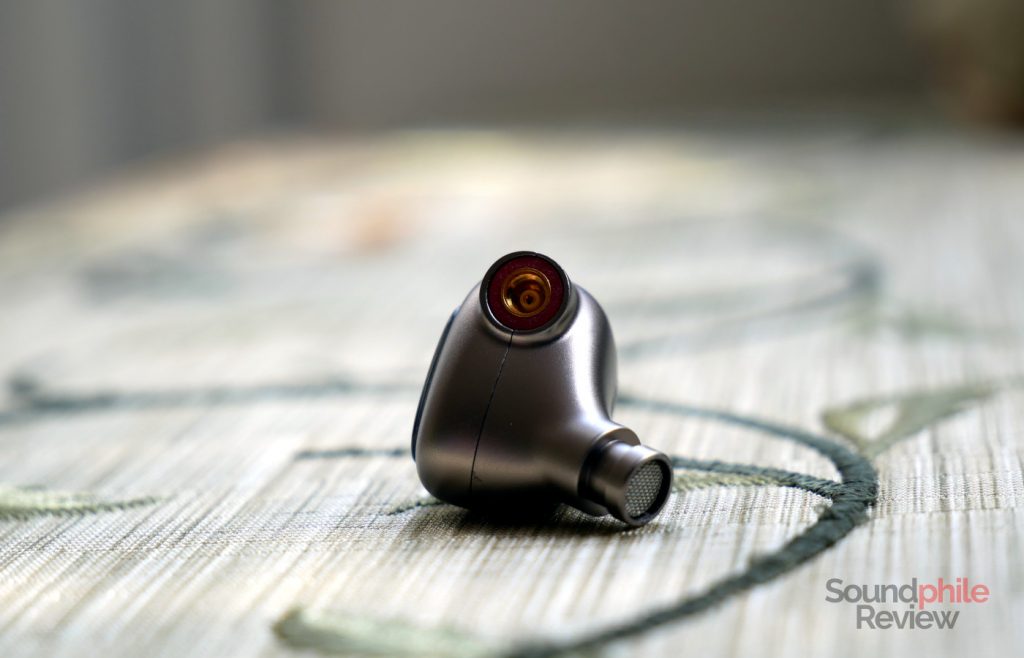 Isolation is decent, but it can only manage mild noise: in a relatively silent environment like a home or a quiet office they are going to be enough to exclude most sounds from around you, but on a busy street or in other situations with loud sounds you’re going to hear them over your music. 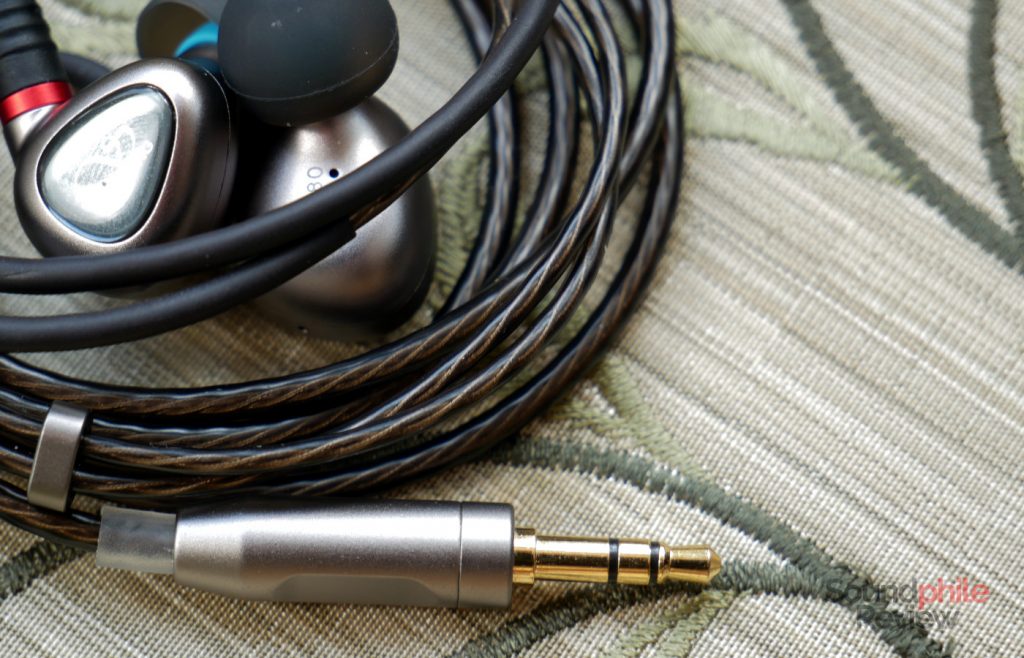 Shanling seems not to follow the trends when it comes to the cable – a stance which I could get behind – and appears to use a four-core cable (two per channel) with thin individual cores, twisted and sleeved in what appears like dark brown plastic. These cores are made of silver-plated copper. There’s a moulded plastic ear hook and metal housings for the 3.5 mm jack and the Y-splitter, as well as a chin slider (which, however, tends to slide down easily and is therefore not as useful as I’d hope it to be). I found microphonics not to be an issue at all, even when walking fast on the street – I haven’t tried running, though.

I tested the Shanling ME80 using mostly a Shanling UA1 connected to my notebook PC full of CD-ripped FLAC files.

The Shanling ME80 use a single dynamic driver with a diameter of 10 mm and made of a PU and PEEK composite. It is then paired to a dual magnet structure. According to Shanling this should improve the driver’s efficiency and that seems to be true, considering the 16 Ω impedance and the 111 dB sensitivity. The ME80 are also Hi-Res certified as they reach up to 40 kHz.

Soundstage has very good width, with a large lateral extension that makes you feel almost in an open space – this is one of the largest-sounding in-ear headphones I’ve tried in the sub-$100 range. Depth is unfortunately not as good and is, in fact, a bit disappointing: due to this, the ME80 end up delivering a 2D-like soundstage. Imaging is a mixed bag, as it is capable of giving precise locations to all instruments but, at the same time, the array of positions available isn’t that great as they tend to be polarised between left and right, with a central position that’s blurry and difficult to place – and then the nuances between centre and extremes being almost absent. Instrument separation is commendable for earphones in this price range, as it allows you to easily tell instruments apart in crowded tracks.

Keeping up with Shanling’s previous earphones, bass is what I would define as “neutral” if not almost reserved. It hits that sweet spot of being present and clearly audible, but never being aggressive or overbearing; it’s really harmonious. It doesn’t hit the deepest depths, but it does in fact have good presence down to about 40 Hz. The level of control is quite remarkable and makes it possible for the ME80 to exhibit great texturing, with lots of small details and great layering that make bass come alive. There’s an average level of physicality and impact, but that’s excusable given the other features.

Midrange is tilted towards the upper region, with an emphasis on the area bordering with treble that gives electric guitars, violins and other high-pitched instruments additional kick. This emphasis is well-done, though, as it keeps a good balance with the rest and never becomes excessive or predominant. It also doesn’t influence tonality too much, as even male voices appear full-bodied as they should. The only thing that could see an improvement is that there’s at times a bit of sibilance. Midrange sits mostly in line with bass, and is maybe even a bit in front of it. It is exceptionally clear and clean, with lots of small details bouncing at you. Again there’s not much physicality, but it’s enough to feel percussion hits.

Treble is emphasised and can sometimes be a bit too much, but this is excusable since it is absolutely delightful. It’s very light, in the sense that it has enough extension to sound airy and open while also delivering a large amount of details. It is quite impressive at that actually, especially considering that we’re talking about a sub-$100 earphone. It’s fast and accurate, with splashes that deliver the right physical sensation. There’s a sense of crystal clarity and of easiness in reaching all the smallest details that is hardly matched at this price point. The only possible issue with treble is that it is emphasised and some may not like this, even though it’s never aggressive or sharp. It’s really significant that this is a single dynamic driver, as usually this is the realm of balanced armatures. Extension is possibly its only drawback, but it’s good enough to give you enough air and openness.

Let’s compare the ME80 to the higher-end ME500 Platinum Edition and to the similarly-priced Tin T4:

The Shanling ME80 are quite a rare find in today’s earphone landscape. They target a relatively neutral curve with an accent on the upper end which makes them sound open, clean and airy. In fact they are basically a slightly brighter Tin T4 – almost like what the T4 might have been, had it retained a tuning similar to the T2’s. The ME80 are a welcome surprise as they have a whole lot of things to offer, all of them decidedly positive. Shanling’s attention to detail really shines with these earphones, which represent music in a way that comes across as genuine and enjoyable no matter what genre you are listening to. Their exquisite craftsmanship and their wide variety of accessories are just great. Most importantly, their rich, clean sound stands out as especially well thought out, even more so at a price point which usually does not give us this kind of quality.