Shanling is mostly famous nowadays for its DAPs, though the company has been manufacturing hi-fi equipment for the past 31 years and it was especially famous for its high-quality CD players. Now the company has been in the earphones game for some time, going from one end of the audio chain to the other. And their efforts in this space have yielded great results! The Shanling ME500 Platinum Edition are their current flagship earphones, and not only because of their price tag.

Disclaimer: I received this unit free of charge courtesy of Frankie at Shanling. Additional information on Shanling’s website.

I often do not pay much attention to packaging and accessories – you may have noticed that reading other reviews. This time’s different, though, as Shanling really nailed the unboxing experience. It’s not perfect, but it’s really close to that. They got everything right, from the sleeve on the box to the way the earphones are presented. Let’s get there in stages. The outermost cardboard sleeve has a picture of the earphones on it and, once you take it off, the box inside is black with the Shanling logo on it. 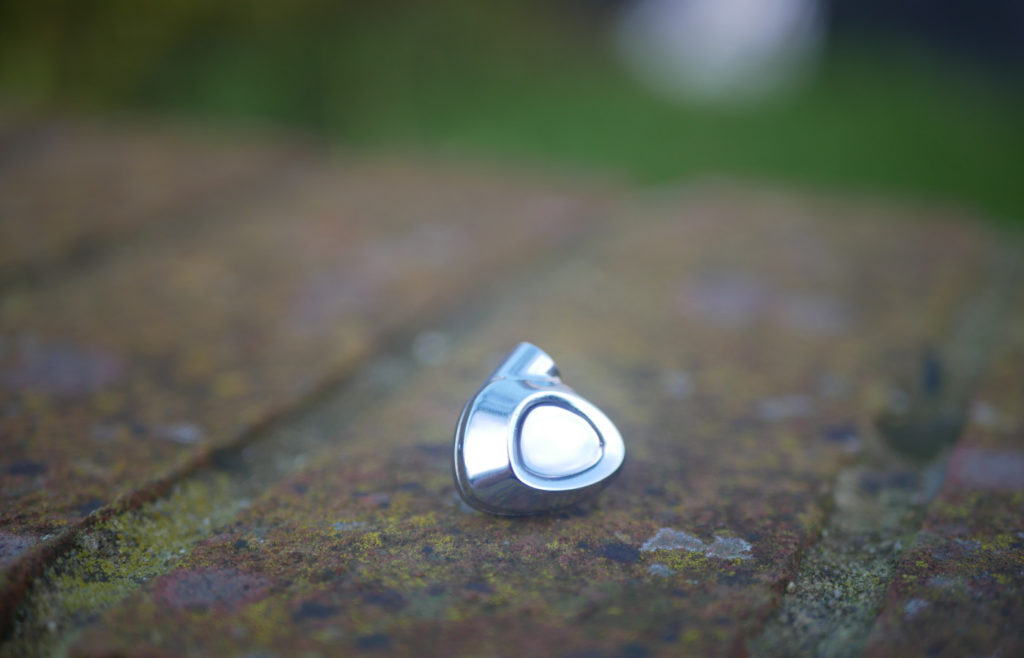 Where have I seen this design before? Right, that’s the Tin HiFi P1! But wait, that’s only because I have reviewed the P1 before reviewing the ME500: the latter actually predate their planar competitor (as mentioned in the review). Anyway, the basics of the design are the same: a triangular metallic shell with a faceplate that has a smaller triangle in it. This inner triangle is made of glass. The ME500 are actually larger and more rounded than the P1. They also feel much, much more substantial in hand. The shell is made of brass with a platinum plating (no kidding!) that should make them almost eternal, but their heft is such that I would not be surprised if you could use them as a throwing weapon. 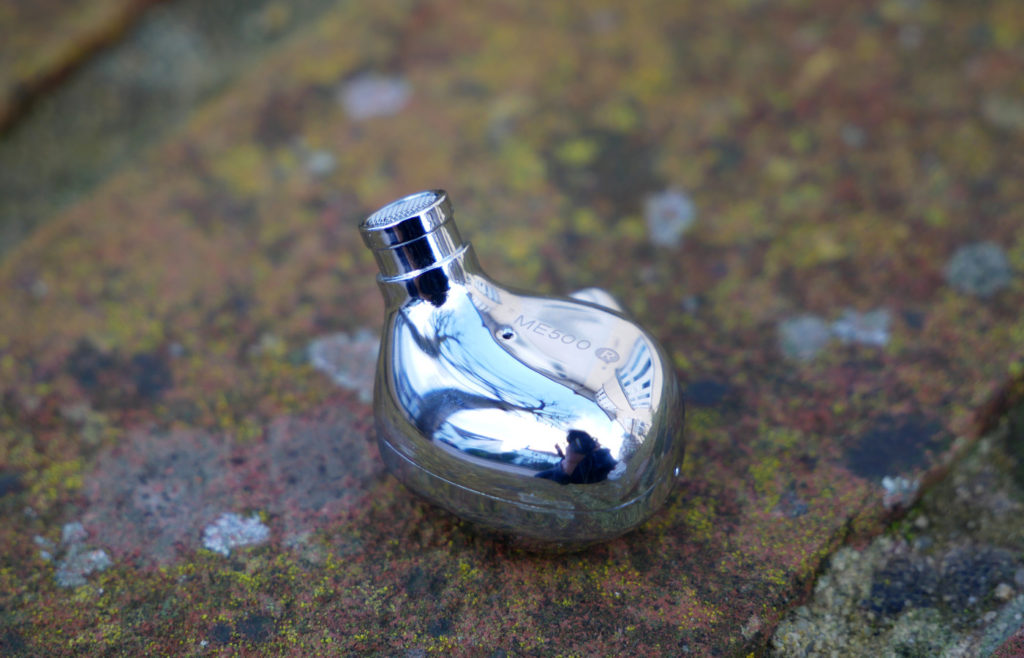 The Shanling ME500 Platinum Edition are exceptionally well manufactured, with the metal parts that fit together perfectly. They’re just gorgeous. Alas they’re also a fingerprint magnet, but that’s a minor downside. The brass they are made of makes them quite substantial, at least when it comes to weight. They’re not super heavy but you can definitely notice their presence. 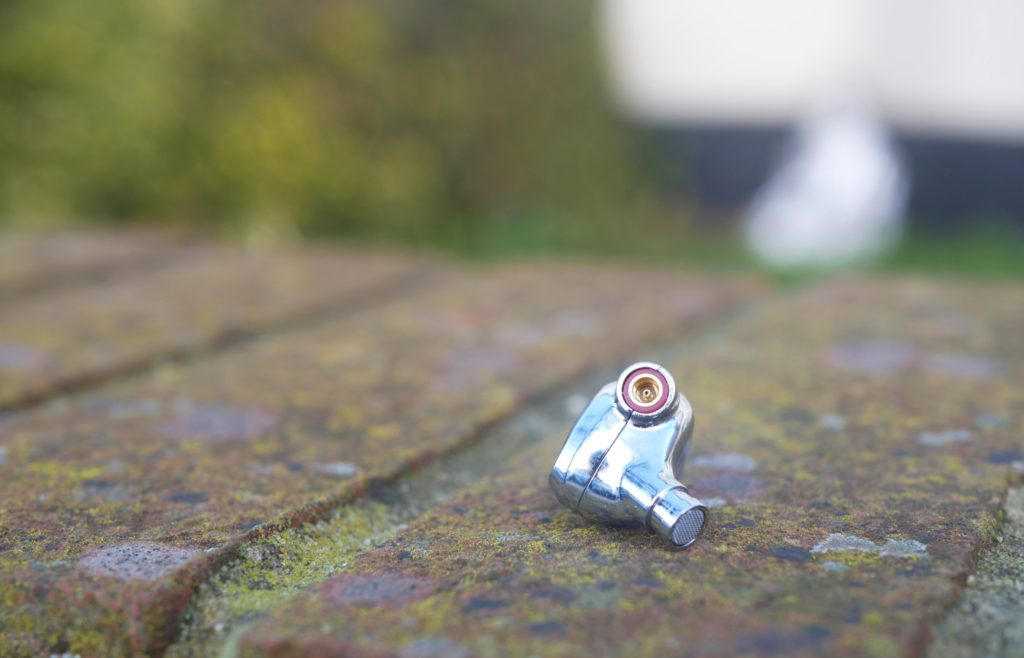 This is the main reason why comfort is good, but you start to feel their presence in your ears after just a couple of hours. On top of this, they are also large, so this may contribute to make them uncomfortable in the long run to those with smaller ears.

If you want to buy in-ear headphones that you can comfortably use on the subway or in other loud environments… well, the Shanling ME500 are not exactly the best option out there. Even when using foam eartips, which are usually the most isolating tips, the Shanling ME500 can barely reduce the volume of surrounding sounds. 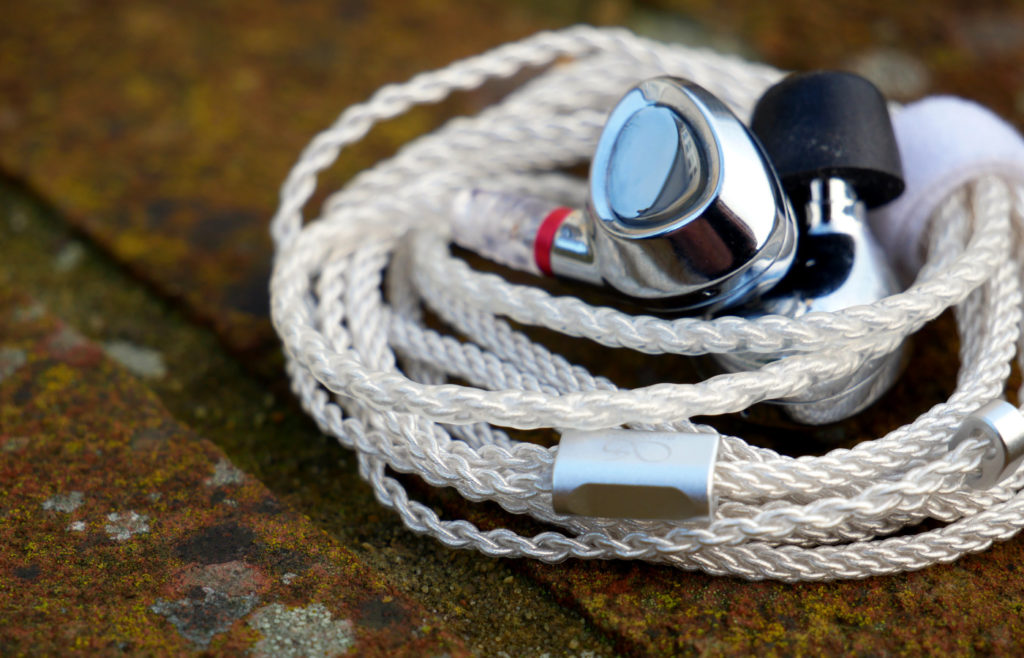 The cable has eight cores, four per channel, but it’s really slim to the point of appearing almost flimsy. It’s a bit like the Tin Audio T2 cable, except that it has double the cores. Each core is made of silver-plated copper, and in fact the cable looks silvery thanks to the transparent plastic sleeving. Both the jack housing and the Y-split are made of aluminium and lend a premium taste to the cable. The MMCX connector housings, on the other hand, are made of transparent plastic with a coloured ring to indicate the channel. I’d say that build quality is very high, with the cable being assembled flawlessly. It’s also relatively soft. My only concerns regard the absence of large strain reliefs (there’s a bit of heatshrink on the jack housing, but that’s it) and the fact that the cable is thin, and therefore more prone to breaking than a thicker one.

I used a few sources when testing the Shanling ME500 Platinum Edition, but mainly I used a Radsone EarStudio ES100 while at the desk (using its USB DAC capabilities) and a Shanling M2X while on the move. Source files were the same FLAC files in standard resolution (16 bit, 44.1 kHz) for both cases.

The drivers inside the Shanling ME500 Platinum Edition are the same as the normal edition. They are a single 10 mm dual-magnet dynamic driver and two balanced armatures manufactured by Knowles (model TWFK-30017). Those take care of reproducing midrange and treble, whereas the dynamic driver reproduces bass.

The Shanling ME500 Platinum Edition seem to target a neutral-ish response curve with an emphasis on upper midrange and lower treble that make them a bit bright (but not tinny). Their dynamic driver provides sufficient bass, which however does not extend to the lowest depths.

Soundstage is decently large, with average width and little depth. It’s as if instruments were playing in a small room or studio, rather than in a large concert hall. This is not too distant from what the average closed-back IEM achieves, so it’s not surprising. Imaging is actually quite decent, with various instruments having a clear position on the stage. Instrument separation is really good, though sometimes it is difficult to tell all the individual instruments in crowded tracks (e.g. Introduction from Mike Oldfield’s Tubular Bells 2003). I guess that’s an issue with the crossover, though, as other tracks (e.g. Take the Power Back by Rage Against the Machine) are notable for their absolute clarity and ease to pick minute details of each instrument.

Bass is neither emphasised nor very deep, leading to a laid-back bass presentation that will probably meet the favour of those who like a “neutral” bass presentation. The lowest notes are not really there in sufficient volume: one can feel their presence, but not really hear them. That’s apparent when listening to Mike Oldfield’s Finale (from the same album as before), with the lowest notes that are there, but with a volume that is too low to be actually heard and is instead just felt (in the sense that you feel the presence, not in the sense that it’s so strong that you have a tactile feeling). There is some physicality in the lower end, but it’s limited. This, together with the good speed, makes the dynamic driver in the ME500 Platinum Edition closer to balanced armatures than to usual dynamic drivers in these respects.

Midrange stands out for its detail. It offers a really superb amount of detail, which includes a good amount of micro-detail – something that’s unexpected at this price point. In terms of tuning, the mids have an emphasis on the upper area that is limited in scope, so the only real influence it has is on violins and voices. In fact this emphasis on upper midrange (and lower treble) causes a lot of unwanted sibilance. If we take Faun’s Lupercalia as an example, one can hear the sibilance clearly. On the other hand, though, most instruments exhibit an enviable clarity and presence. Guitars are just clearly there, sparkling with detail, and so are most other instruments. Everything sounds crystal clear – the notes are well-defined and clear-cut. It’s just so enjoyable!

Treble is probably more present than many people will like, but it’s also incredibly good. It’s airy and sparkling, and it’s also chock-full of details. It is well extended, so it has real depth that gives instruments great presence. Hi-hats, cymbals and other similar instruments sound “three-dimensional”, and by that I mean that they sound full, with a variety of frequencies that are mixed just as the real thing. Maybe it’s clearer if I say it’s the opposite of flat! There’s variety, so it doesn’t sound as if it was all the same – it isn’t! And you can hear a very large amount of details and micro-details, which add to the listening experience in a significant way.

At around $300, the Shanling ME500 Platinum Edition has to face fierce competition. Here’s a selection of earphones in a similar price bracket:

It took quite a while for me to “understand” the Shanling ME500 Platinum Edition. At first I liked them because of their tuning, but didn’t think they were great. Then I realised the amount of detail there is and the very good technical ability they have. All being told, they’re great in-ear headphones. At $300 they offer everything one could hope for at that price range. If you are a fan of the Tin HiFi earphones, it is as if the ME500 Platinum Edition were a new, better edition of the T3, with less brightness and much better technical ability. Plus, their build quality is stellar! It took some time, but I finally fell in love with the ME500 Platinum Edition. They’re like a good cup of tea: the real treat is in the small nuances, in the sweet flavour, in the fact that you can just sit there and – finally – relax and enjoy it.

The Shanling ME500 Platinum is awarded with the Best of Soundphile Review award and goes to the best earphones page!