Shozy’s collaborations in the IEM space continue to produce great products with outstanding value and superb audio quality. Their collaboration with Neo is especially notable in this regard as the two companies were able to create products with peculiar features and peculiar sound signatures, but highly enjoyable and especially capable. The Shozy x Neo BG is one such product: a “bigger brother” to the Shozy x Neo CP, the BG adds a couple of balanced armatures to the mix and elevates the sound quality by a large margin in doing so – more than one would legitimately expect.

Disclaimer: this unit comes from Linsoul Audio and will not need to be returned. They sell the BG on Amazon at $279. You can find additional information on the manufacturer’s website. 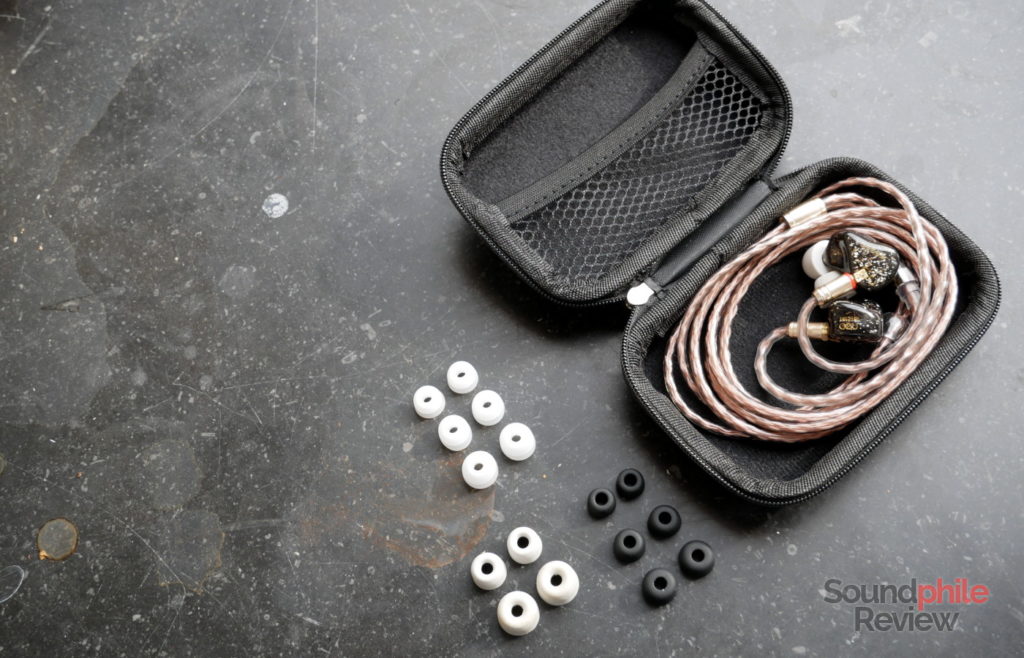 The accessory set of the Shozy x Neo BG is almost identical to that of the CP: there’s a hard case containing the earphones, the cable, one set of black silicone tips, one set of double-flanged white silicone tips and one set of foam tips. All sets come in three different sizes. It’s a fairly complete package with everything one would need, save for a cable clip. The case is especially notable for being good quality. 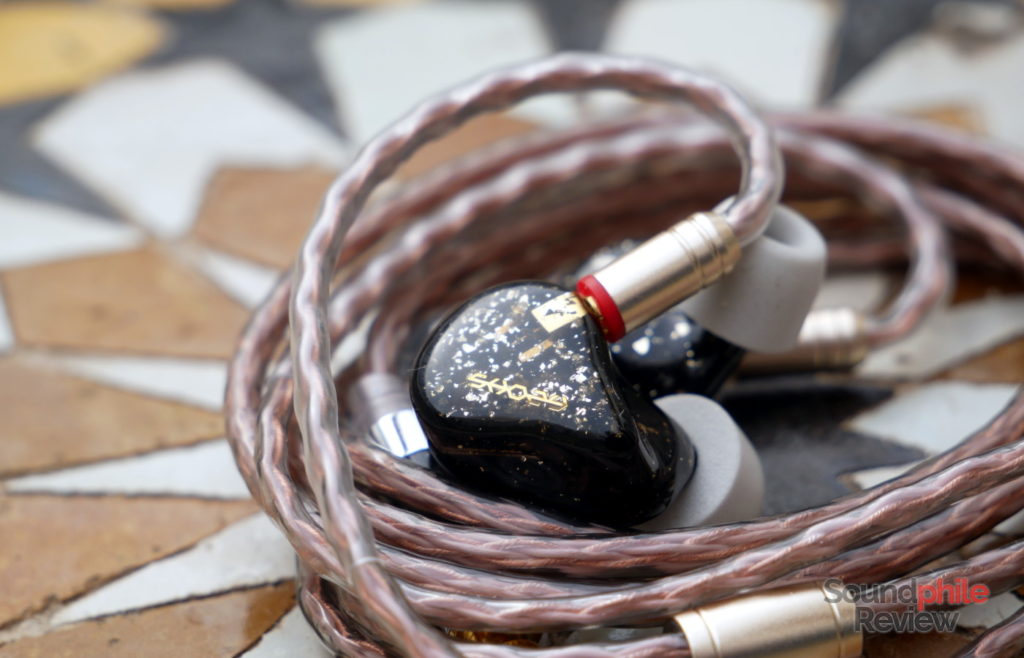 The shells are made of resin which was apparently poured over the electronic components. The resin is a mix of solid black and specks of gold, similarly to the PMV Crescent 8BA. The shells appear therefore as a single piece with no seams, resulting in a solid and unique look. The specks of gold certainly add to the peculiarity of the look. In terms of shape, the Shozy x Neo BG are almost triangular and look fairly close to other IEMs such as the BGVP DM6. The most striking difference is the presence of a metal nozzle that’s perfectly inserted in the shell. 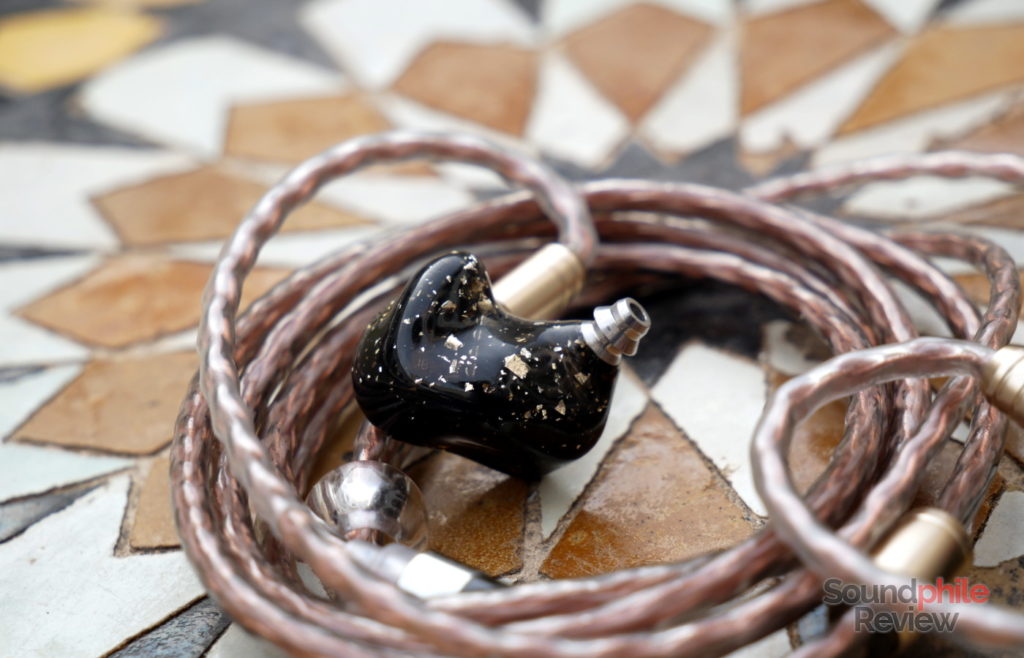 Build quality is top notch: the resin seems to be of good quality, and there’s no seam at all. The earphones appear to be built really well and they’re a notch above the average in this regard. The only reason for (relative) concern are the MMCX connectors, which are famously less durable than ideal. 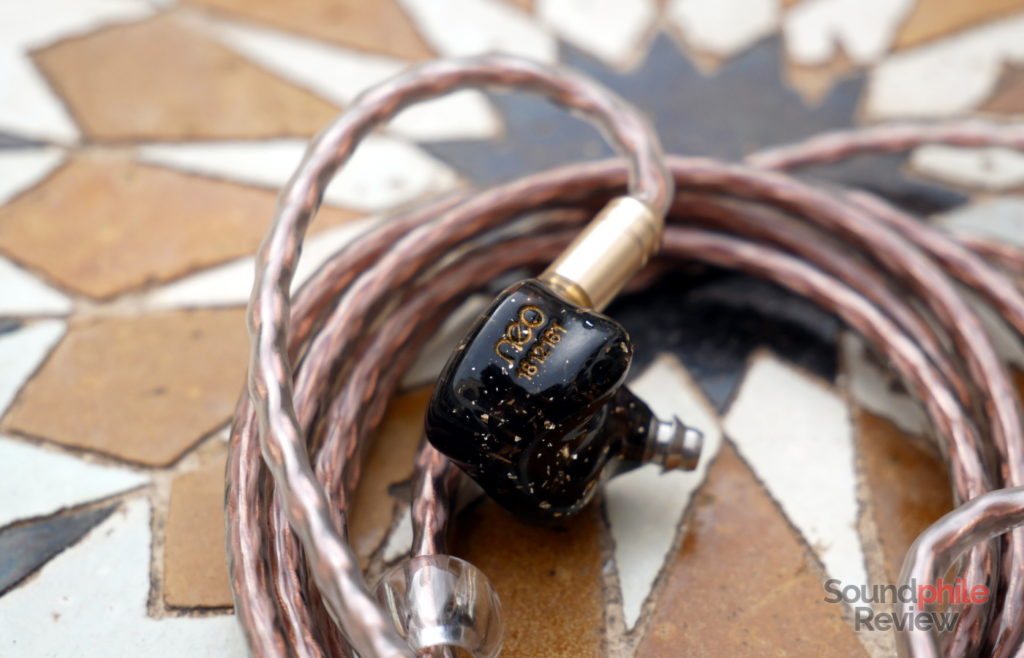 Shells whose shape is made to be ergonomic tend to be a hit-and-miss as the ergonomic features could actually harm comfort if they do not conform to the shape of the ear. Despite the Shozy x Neo BG featuring some ergonomic shaping, comfort is superb, at least in my case. I could wear the BG for a couple of hours before feeling any fatigue, which I consider a good thing. As each person has different ears, the fit will be different for each person, so take my considerations as just a hint – your mileage may vary. 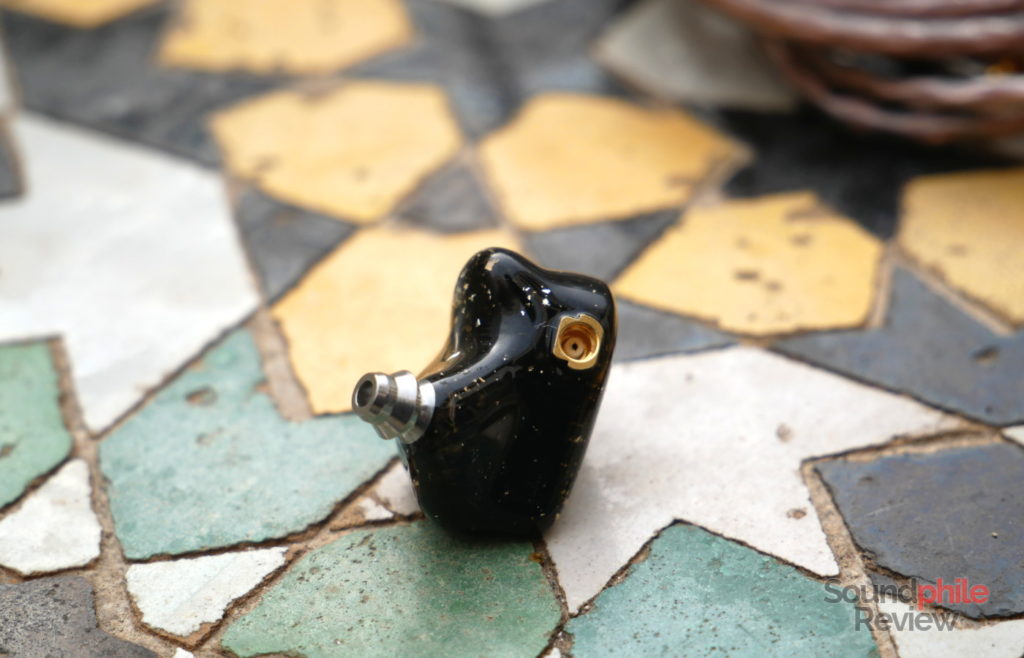 Unlike the previous model, the Shozy x Neo BG do not stand out as a champion for isolation. They do indeed offer good isolation that’s above average, but that never equates to music being clearly audible in noisy environments (e.g. public transport, aeroplanes, etc). 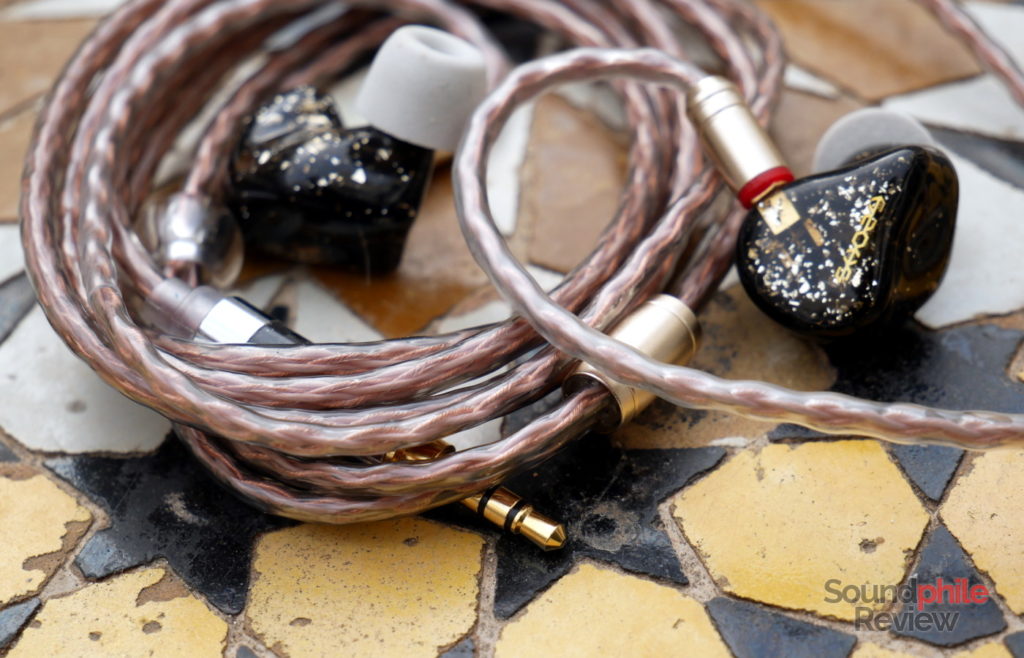 The cable is quite peculiar, as it is made of eight braided cores encased in a plastic hose (two groups of four strands after the Y-split, still surrounded by the same plastic). The cores inside this plastic case are divided into two groups, one in copper and the other in white colour. Despite the additional plastic layer, the cable stays malleable and relatively soft. I’ve never seen such a peculiar solution before and the main advantage I can think of is durability and resistance, which should both be improved.

Shozy and Neo stepped up their game with the BG by inserting five balanced armatures in each channel – including armatures by Knowles. Like many earphones with balanced armatures, the Shozy x Neo BG have low impedance and high sensitivity. They can therefore be driven with practically any source, though they might expose background noise or issues with high output impedance.

Soundstage presentation is wide but not really deep. The feeling of space is however very much present, with music propagating a virtually large space – though it is as if music happened on a wide yet shallow stage. Imaging places instruments with accuracy on the stage and each has its own position, but it’s not able to paint a portrait so accurate that I would be able to pick the position of the single instrument with pinpoint accuracy – it’s more of a “it’s more-or-less there“. This is still good in absolute terms. Instrument separation is really good and makes telling each instrument apart easy enough that even tracks with many instruments overlapping are easy to dissect in the various instruments playing on their own.

Bass is fast and almost dry, exactly as one would expect of balanced armatures, but it actually has a bit of physicality that sets it apart from the category. Drumbeats and other impact sounds possess a physical sensation that’s highly unusual in balanced armatures; it almost feels like it has a punch. In terms of depth it’s limited, as it only reaches down to around 50 Hz with enough strength to be fully audible and felt, but this is enough to have a good foundation. The lack of sub-bass presence is especially felt because bass as a whole is just south of neutrality, so it may be even described as a bit lacking. It sits in the right place in the mix, however, and it steps in with good presence when it’s needed – I never felt it as lacking in general. Just as is the case with most balanced armatures, they produce bass which is well controlled and textured, with a good amount of detail and strict control so that it never leaks over the midrange.

Midrange, on the other hand, appears bright thanks to some added presence in the upper range. The upper area emerges as the main actor on the scene, with the lower one that is a bit in the background in comparison. There’s no significant imbalance at play, so the two come across as in harmony, still clearly audible nevertheless. This emphasis adds sparkle and vividness, especially with wind instruments and brass instruments, which really pop out in the mix. The good news is that midrange is really finely detailed even in the most crowded tracks, a feature that comes in especially handy as it allows one to hear all the nuances and small things in recordings. Its speed is also commendable – plucked instruments and drums are convincing, though the latter evidently lack the lower midrange presence. Despite the emphasis on the upper area, voices are still natural enough and don’t sound as if the singer was panting (for the lack of better words: when there’s emphasis on the upper midrange, voices often sound unnatural as respiration is emphasised and makes the singer seem to be panting).

Treble sits in the limelight and offers good presence throughout the whole area, with extension that leads the upper range to still be clearly audible and lending air and a bit of sparkle to the sound. It really sounds crisp and clear. The emphasis is mostly in the middle region, though it also involves the lower section; extension is enough to cover the upper area as roll-off is gentle. Although it is a bit emphasised, treble is never harsh or fatiguing and is instead really pleasant to hear. Its crispiness and fine detail really make it enjoyable and add sparkle and vividness to the sound, making it airy and open.

Shozy and Neo deliver a finely crafted IEM which displays great technical ability and an exciting, deeply involving signature. Despite their brightness and emphasised treble, the Shozy x Neo BG never sound aggressive or fatiguing. I may say they only take the good parts of emphasised treble – truly a difficult task to accomplish, given how treble is often the most fatigue-prone area. Its commendable technical ability is a nice cherry on top. I would say the Shozy x Neo BG are one of those IEMs that really stand out from the crowd because of their unique take on sound: they’re crisp, engaging and fun while being faithful to the original music. Oh, and they’re comfortable too.