In the last few years, more and more IEMs have been featuring acoustic filters that allow one to modify the frequency response of the earphones. The LZ A6 offer one of the widest arrays of stock filters, with nine different filters to choose from.

Disclaimer: Linsoul Audio provided this sample and I did not have to pay for it. They sell the earphones on their website and AliExpress at $310. 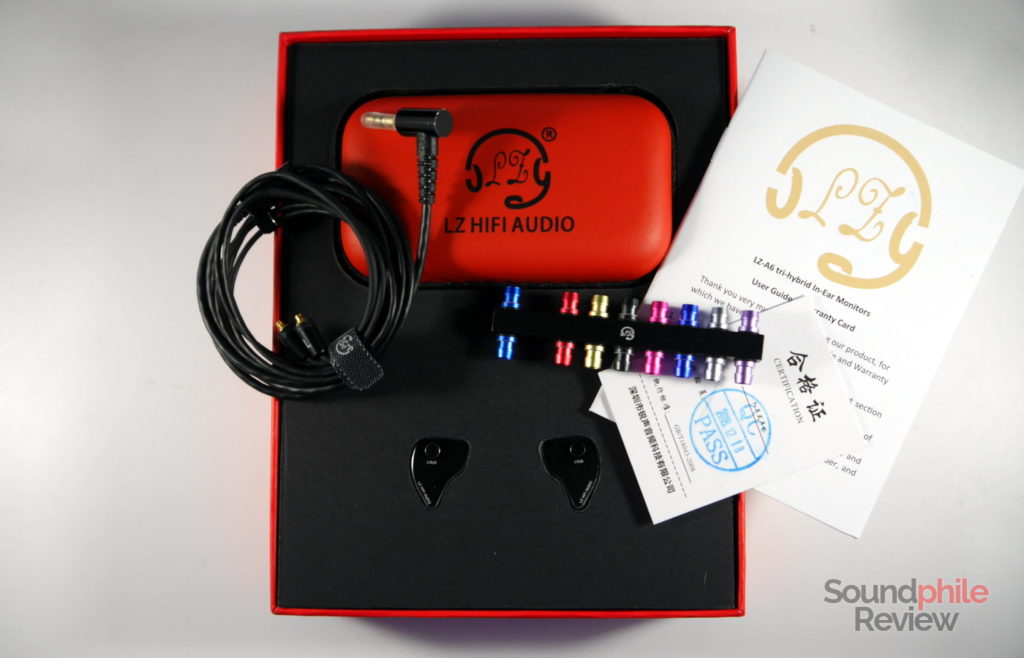 The LZ A6 come with what I would call a standard set of accessories in this price bracket. Inside the (rather anonymous) cardboard box are in fact the earpieces, the cable (with a Velcro strap to keep it tidy), a set of acoustic filters on a metal tray, a set of eartips (three pairs of single-flanged tips and three of dual-flanged tips) and a hard carrying case that has enough room to hold the earphones and all their accessories. 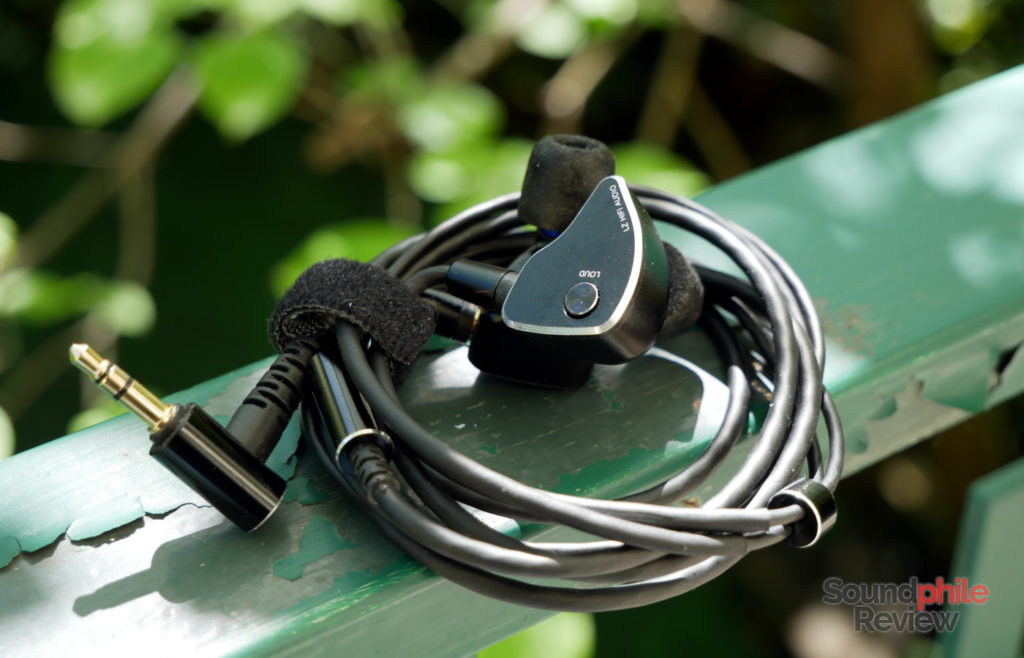 The LZ A6 are triangular shaped, with curved lines that eliminate any clear-cut edges. They are quite unlike any other in-ear headphones I tried, as they are more clearly triangular than others such as the BGVP DM6 or the KZ AS10. They are also quite large, with shells that are tall enough to protrude from the ears even if you push them all the way inside the ears.

The surface is quite uniform, in terms of shape: there are very little depressions or “horns” such as those seen on the KZ ZSR or the BGVP DMG. This means two things: that the earpieces are not ergonomically shaped, but also that they can adapt to practically any ear. Variations between ears can be quite dramatic, so ergonomic designs are not always comfortable – having no ergonomic shapes can result in earphones being more comfortable, however paradoxical that may seem. 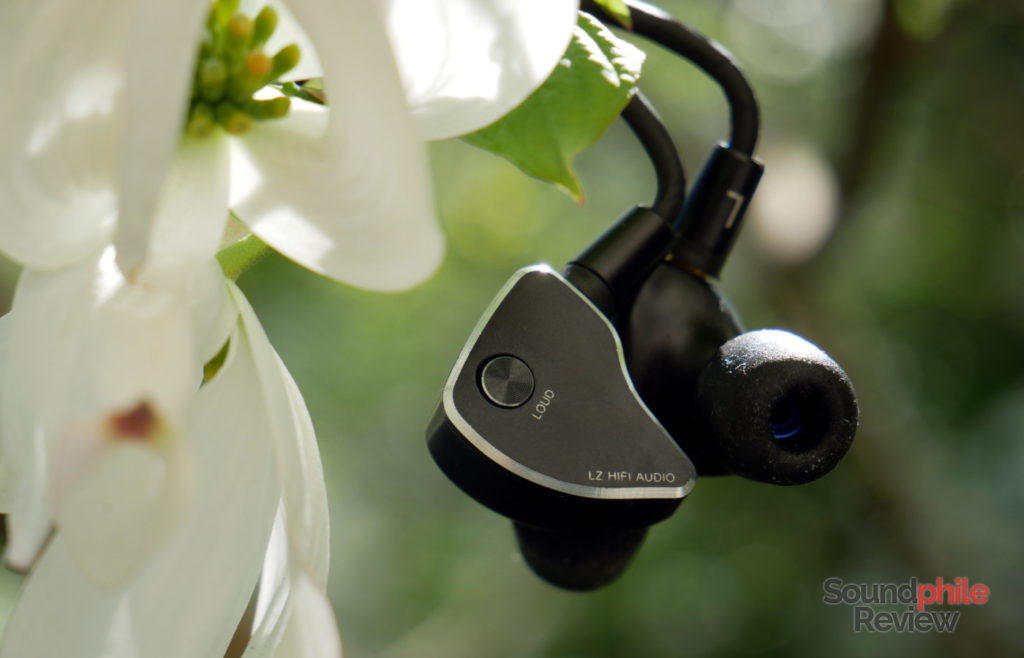 The shells are made of two pieces of aluminium: the shell itself and the faceplate, which are made so that the seam is almost invisible. The metal is coloured in black, with the edges of the faceplates that are machined to expose the natural silvery colour and contrast with the black.

There are the nozzles, then, and the plural is used because of the fact that there are multiple nozzles that include different acoustic filters. The nozzles have a giant lip that secures the tips. 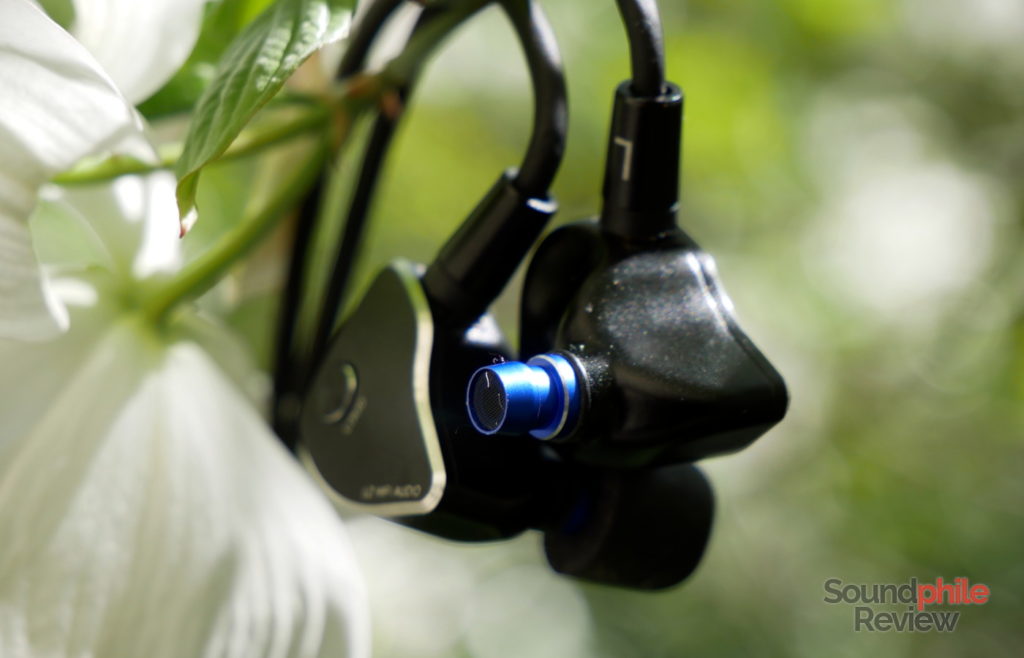 The LZ A6 appear to be well-built with quality materials, at least when it comes to the shells. There are very little seams that are almost invisible, so the assembly is done well (though the right light, such as that in the picture above, shows the seams clearly).

When looking at the LZ A6 and at their huge size, one might be induced to think that they are not really comfortable. That’s thankfully not true, as the curves on the A6 afford it a good fit despite the large shells. The almost-triangular shape without clear-cut edges helps in making the shells comfortable for a lot of people, though those with smaller ears might find them a bit too big anyway. I used the LZ A6 for multiple hours without feeling anything more than a slight discomfort. 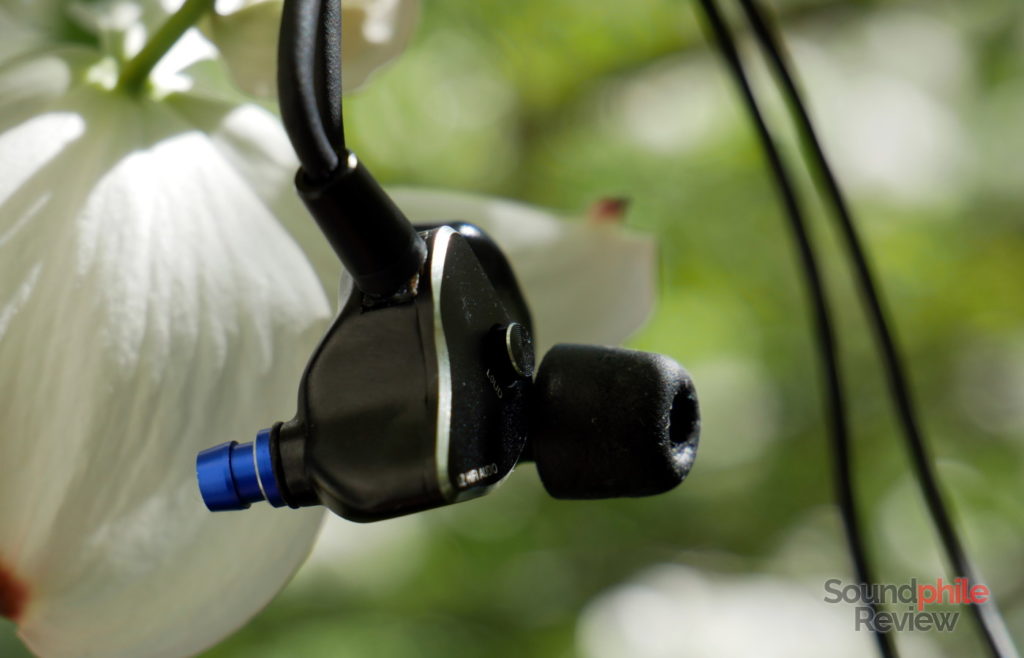 Irrespective of eartips, the LZ A6 do not feature isolation among their best qualities. Isolation is in fact moderate at best and never allows one to keep the volume low if the surrounding environment is noisy. Situations such as public transport, crowded places, busy streets and so in are not recommended for the A6. 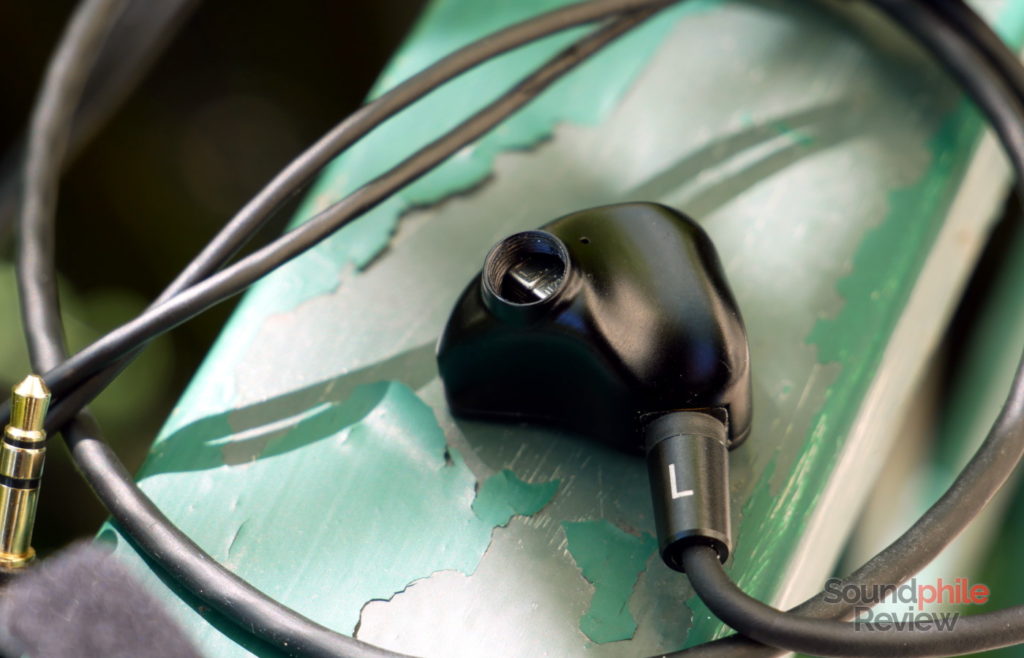 The cable is also an area that would require major intervention. While the cable appears to be well-made, it actually has quality and comfort issues. It is in fact covered in rubberised plastic, which is springy and has a nasty tendency of getting in the way as it grips practically everything. Using a shirt clip can only do so much. The other issue is the fact that the left channel stopped working correctly after a couple months of discontinuous use – far from ideal. This may be an isolated incident, of course, but I have to report it for transparency.

When writing this review I used these sources: a Topping D30 feeding a Venture Electronics RunAbout 2.0bl, an iFi nano iDSD Black Label, an iFi xCAN and a Shanling M2X. Source files were FLACs for the most part.

Alas it seems like tuning piezoelectric drivers is not an easy task, as the LZ A6 often tends to display piercing highs and lots of sibilance. This, together with an aggressive tuning of the balanced armatures taking care of highs, makes the sound as a whole harsh and difficult to bear. Luckily, though, LZ provided the A6 with a system of tuning filters that can alleviate the situation.

Using the “loud” button on the shells really does make music louder without audible changes in the sound signature, which is quite remarkable. It allows one to use the LZ A6 even when there’s a lot of power available or when the source has (relatively) high output impedance.

It may be due to the high driver count and their good tuning, but the LZ A6 display a remarkable technical ability, especially when it comes to instrument separation. Soundstage is not extremely wide nor deep, but it sounds like a three-dimensional space where the instruments are placed – it does not sound like a compressed, flat surface with point-like instruments. It sounds like a space where instruments with their own physical presence are playing. Imaging makes instruments have precise positions that are more than just cues and it renders the full scene, so I could hear a choir singing on the full stage. Instrument separation, as I said, is remarkable and really allows the listener to hear the different instruments with good clarity, even in crowded and complicated tracks – I could hear instruments clearly when listening even to the most complicated metal tracks, which are not exactly famous for being clear and easy to listen to!

Whichever filter you choose, bass is powerful and deep. In fact it’s the least affected by the filters as it is mostly good as it is. I would not define it as “neutral”, as it has some added presence at the intersection between sub-bass and mid-bass, but this emphasis is done well as it keeps the overall signature balanced. Depth extends down to 30 Hz with ease, giving the sound a solid foundation to build on and a good amount of body. Despite the additional emphasis I mentioned before, bass is surprisingly linear, with very good control that keeps it in check and never leads to leaks over the midrange. Control shows in detail, too: the LZ A6 are able to display a lot of minute details in bass and to do it even in complex situations where it’s not a given (e.g. tracks by Snarky Puppy). It also has good physicality and fast transient response that leaves enough decay for drums to feel natural. In short, this is bass that’s not neutral, but it’s damn good – everything you could look for is just there in terms of quality. Though it may not be the most detailed, or the fastest, it has enough good properties to just feel and sound very good.

Detail in the midrange is probably my favourite feature of the LZ A6. These earphones are able to display an incredible amount of detail in this area, down to the ability to discern the single clap of hands in Snarky Puppy’s Atchafalaya. This is the cherry on top: though midrange is not perfectly linear, having a bias on the upper range, it is still well balanced and really enjoyable. Its emphasis on the upper area makes brass and wind instruments appear as especially present and vivid. This same emphasis does not interfere with coherence too much as the climb is gradual and there are no sudden peaks and drops, though there is a bit less presence than it should be in the lower-mid region. As a practical example, this makes the chorus in The Bridge of Khazad-Dum from The Lord of the Rings: the Fellowship of the Ring sountrack almost disappear in a few key moments. An interesting fact is that midrange is really clean and it’s remarkably fast, as drums and other impact- or plucking-based instruments demonstrate.

Treble is emphasised even using the purple filter, which should be the second-darkest according to the manufacturer. The bulk of the emphasis is in the middle part of the spectrum, with a rapid return from the peak and then a slow descent that leads to good extension and nice presence even in the higher range. The piezoelectric driver and the balanced armatures really do their thing as treble is finely detailed, with lots of really minute details in the whole area. All these details are always clearly laid in front of the listener and never forced onto them, neither being lost in the mix – they’re just there for you to take without being obtrusive. This makes treble on the LZ A6 especially likeable to those who pay attention to details, even though the emphasis may become fatiguing in the long run – and that’s its main flaw.

The LZ A6 comes with the largest set of filters I’ve seen so far: they have 9 filters in total, each of which has its own distinctive tuning. In order to write the following analysis I chose the purple filters as they are those that exhibit the most balanced frequency response. Considerations on the other filters were developed basing them on how they sound compared to the purple filter. The filters, sorted by increasing highs presence and each compared to the previous one, sound as follows:

The LZ A6 shines in a few key areas: technical ability (including detail), control and comfort. One may say these are the key areas for IEMs to be good and I wouldn’t be against this opinion. The LZ A6 are in fact absolutely gorgeous from an acoustic perspective if one can put up with the overly present treble. That, together with build quality issues, is the only real flaw I can find in this product, which otherwise shows the level of technical accomplishment LZ has achieved. The purple filter may be good for most people – if you think a bit of added treble in a technically superb IEM can be your cup of tea, this is probably like visiting a tea plantation. Plenty of cups to find there!