The Shuoer Singer are earphones with lots of pros, but also lots of cons. They are a good reminder of how the earphone space has evolved in the last five ears, with great earphones being available at affordable prices, but they’re also a reminder of how there are still issues with the so-called Chi-Fi scene, with tuning issues and inconsistent quality.

Disclaimer: I received this unit free of charge from Linsoul. They sell it for $74.99. 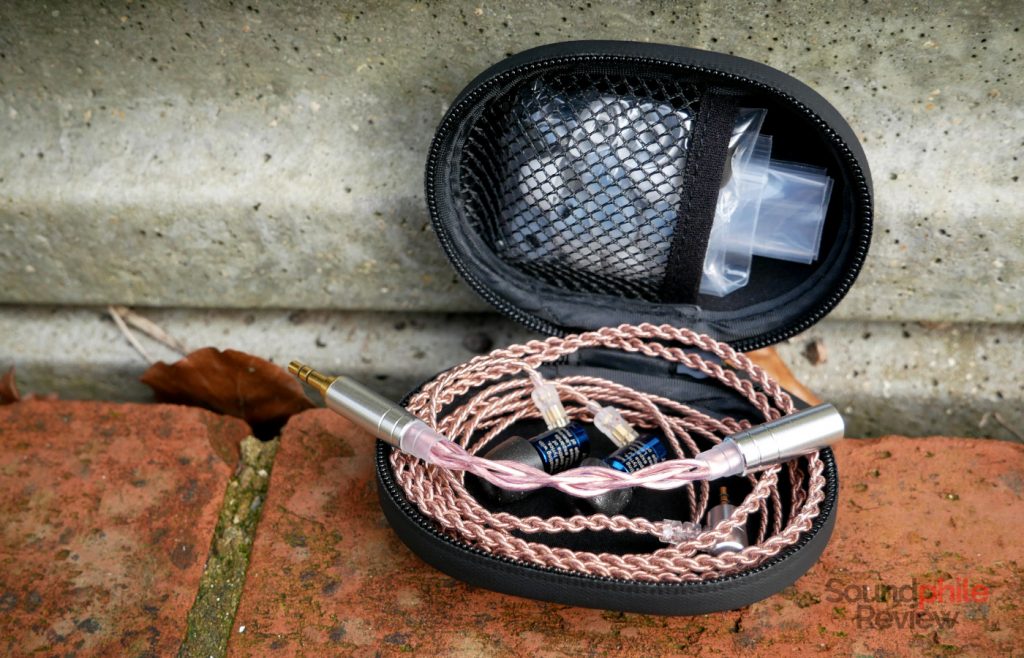 While the packaging is nothing special, being it just a cardboard box, the accessory set is quite good for IEMs of this price. The Shuoer Singer in fact come with a hard carrying case, three pairs of dual-density silicone tips (transparent white and black), three pairs of white silicone tips, two pairs of foam tips, a 2.5 mm to 3.5 mm jack adapter and an additional set of nozzles/filters. 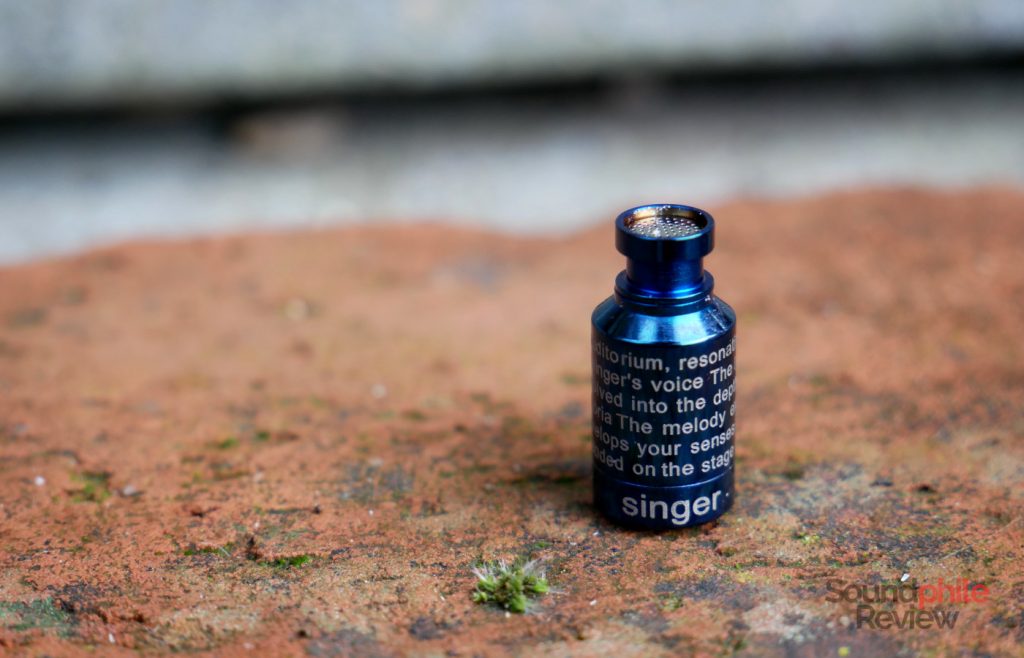 It’s a widely known fact that many Chinese companies approach English in the same way as many Westerners approach Chinese: with no clue as to what the actual language and culture are. So you have literal translations on both sides that end up being quite hilarious: tattoos with Chinese ideograms whose actual meaning is “I like to lick shoes” and earphones with nonsense English text (see “oppoty” on the BLON BL-03). Shuoer tries to emulate these bad examples by writing some text on the shells of the Singer (lack of punctuation as in original):

The auditorium, resonating with the singer’s voice The lyrics, dissolved into the depths of euphoria The melody expands and envelops your senses Leaving you stranded on the stage of music

Yeah, whatever that means! It would be poetic, if it wasn’t nonsensical. But again, that’s probably to do with some cultural element I can’t grasp due to my limited knowledge. And I can’t speak a single sentence in Chinese, so I can’t criticise too much either! 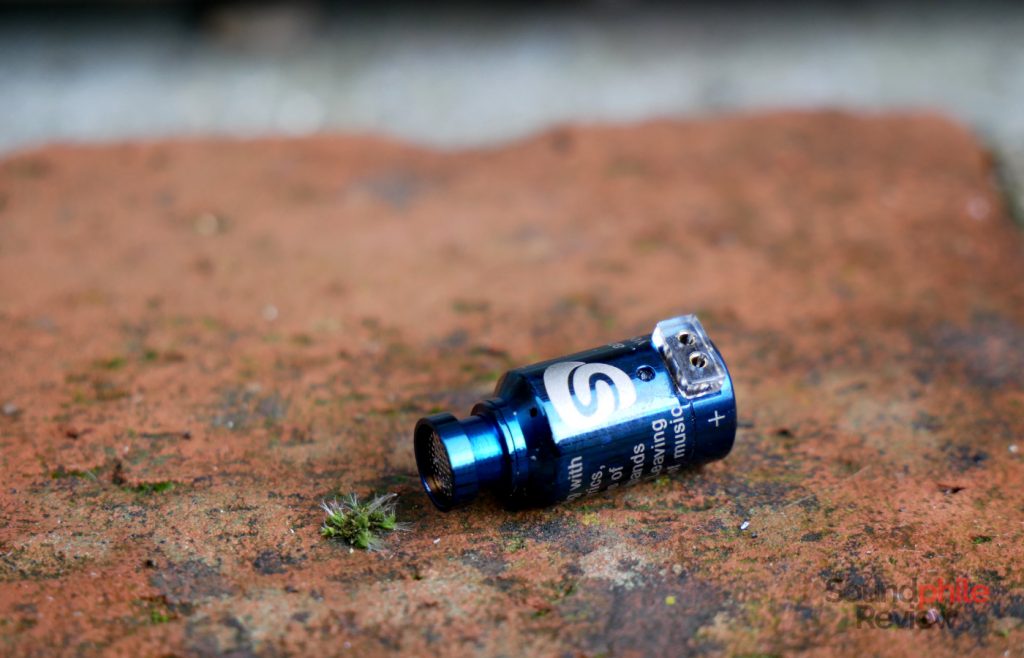 Back to the earphones: odd texts aside, the Shuoer Singer appear like quite ordinary earphones with a bullet-like design. They look a bit like the Earstudio HE100, though the Singer actually appear a bit more elaborate to me: they have a metallic dark blue finish that looks quite elegant and refined, with a good contrast with the copper colour of the cable. They also have clear-cut lines which I like quite a bit. The right and the left earpieces have a coloured plastic circle on the “faceplates” that indicates whether it’s the right or left channel.

The nozzles are also removable as there is an additional set, characterised by a blue colour in the screw thread. The two sets are otherwise identical and easy to screw on and unscrew. 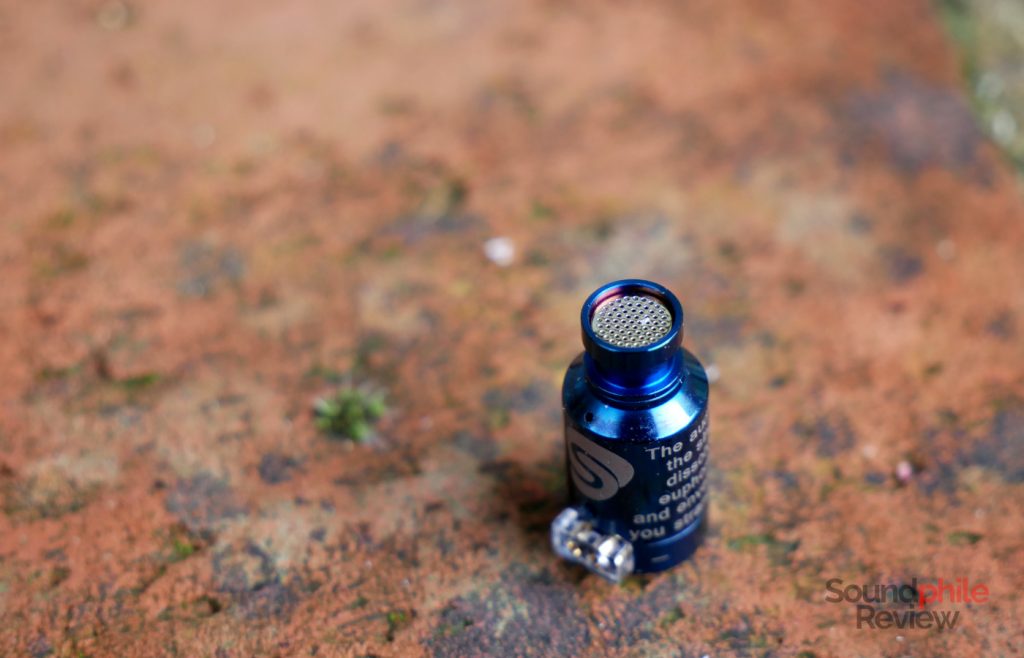 I found the Shuoer Singer extremely comfortable, one of the most comfortable earphones I’ve tried lately in fact! The deep-insertion design coupled with the bullet-like design really helps in limiting the contact surface with the ear to a minimum and this in turn makes comfort better. 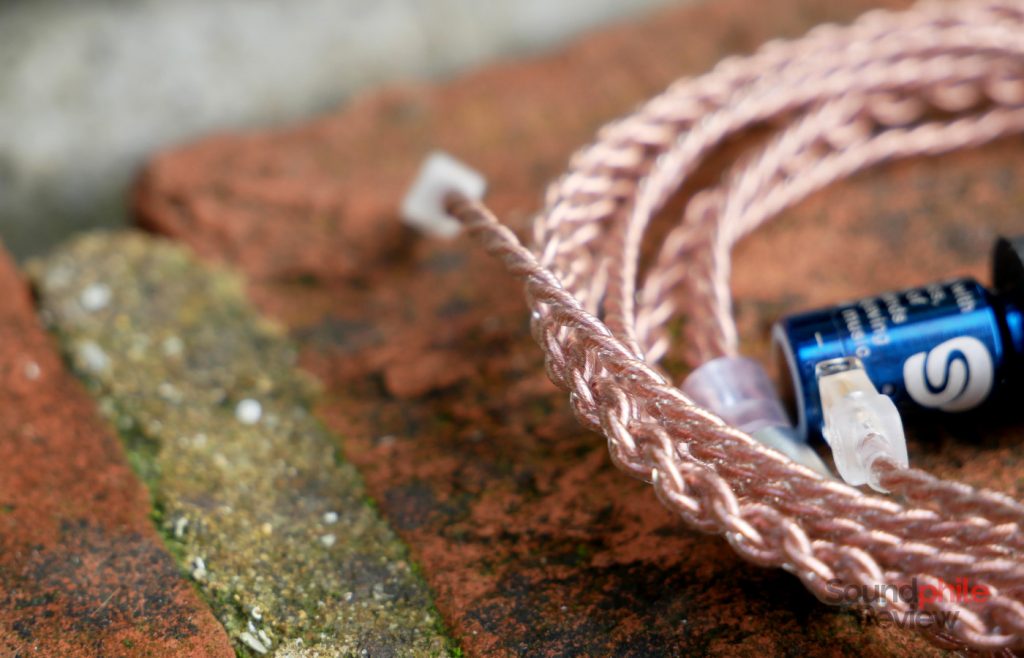 The cable is really soft and malleable; it’s made of four cores, seemingly with a good percentage of the diameter being copper and just a thin plastic sleeve. There’s a plastic chin slider which is however almost useless as it keeps on sliding down. Unusually enough the jack is a 2.5 mm TRRS one, so it can be used with balanced sources.

I tested the Shuoer Singer with a few different sources, including the EarStudio HUD100, the FiiO M9 and the HiBy R5. Files on all devices were the same FLACs (most of which ripped from CDs and therefore in 16 bit, 44. kHz).

Shuoer opted for a dual driver setup: one is an 8 mm dynamic driver, the other is an electrostatic driver. Now, the latter does not bring anything really special to the table, so it’s more of a stunt than anything else, but it’s still quite interesting to see new driver types being brought to lower price ranges.

Warning: before continuing, I need to address the fact that many of the reviews I’ve read online say the Singer are plagued with excessive bass and problematic treble. None of these is true for the unit I received. Some people mention that by blocking the vents near the 2-pin connector they get a much more linear signature which appears to be more in line with what I experience, so either my ears are shaped so that they’re blocking the vents and I get this better, more linear tuning (but I’m not too keen on believing this), or there are multiple versions of the Shuoer on the market and finding the right one is a matter of gambling. In any case it seems like I am lucky and my impressions are not as negative. But earphones should be consistent in their tuning, not a matter of luck, so that’s why even though my findings are good the final rating is low.

Soundstage has average width and little depth, so it appears as if musicians were playing in a small room. Something that influences imaging, too: oddly enough it’s mostly concentrated in the central area, with little extension to the sides, which goes in the opposite direction of the usual main issue with imaging (which is, instruments at the sides and not in the centre). Instrument separation is decent, but little more than that.

Bass is the predominant area in the sound signature of the Singer, by a very wide margin in fact! It sits in front of the rest, with a clear emphasis that makes it preponderant but not overbearing. It definitely doesn’t overpower the midrange, although it does push quite a bit further than the ideal neutrality target. What I find most interesting is the fact that it goes quite deep, so it offers some real fun in that regard: it’s decently fast and physical, so death metal and electronica are definitely worth it. As the peak appears to be in the lowest area and there is then a gradual reduction in volume there’s a somewhat good internal balance. It’s still quite emphasised though, and it gives tracks a clear colouration. Detail is luckily more than decent, with layering being almost as good.

Midrange is unbalanced, but in a relatively reasonable manner. Let me explain that: there is an evident preponderance of the upper area, with the issues being both an excessive emphasis on that area and a lack of emphasis on the lower and middle areas, but this doesn’t lead to the piercing signatures of many Chi-Fi earphones I’ve reviewed in the past (e.g. GuideRay GR-i, Peacock P1). It can be fatiguing at times, but it has more to do with the specific track having already a large presence of high-pitched instruments. It’s certainly far from ideal, though: it sounds lacking in body, as if there was some kind of filter. On the other hand, though, there is a very decent amount of detail and the speed is quite good.

Treble is quite unremarkable and in my opinion that’s an issue. Let me explain that: I do maintain that it’s interesting to see new driver types, but they have to bring some kind of advantage to the table. The problem with the Shuoer Singer is that their electrostatic driver does not seem to bring any advantage to the sound signature and, on the contrary, it seems like it offers limited extension and a few peaks (which I didn’t find problematic, however). This seems to defeat the point of using a different driver type, as there are no advantages over dynamic drivers or balanced armatures. Apart from the limited extension and the presence of peaks, treble is unremarkable in terms of detail: it’s decent, but that’s it.

The additional filter set included in the box has very little effect on the sound and only seems to boost bass by a bit. It’s practically useless as the difference is negligible and barely audible in most cases.

As this unit seems to be an exception rather than the norm, I am not going to do any comparison.

The thing with the Shuoer Singer is that they do not have a neutral signature, but do that in the right way: there’s no imbalance that’s so large that it becomes problematic. Bass is surely the largest deviation from the rest, but it is well-controlled and this makes it fun, rather than fatiguing or sounding wrong. But the problem is that it seems they’re also highly inconsistent in their quality and it means they’re not what I would recommend in their price range, even though the ones I got are a ton of good fun – I mean, if you want to listen to The Prodigy these are great! Buying something with the hope of it being the right version is however not acceptable, so I do not recommend you getting the Singer.