The lower end of the earphones market is teeming with life, mostly thanks to Chinese companies. Brainwavz is among them and their Brainwavz ZETA in-ear headphones are an entry-level product with a tuning that I would call “mainstream”, featuring loads of mid-bass, recessed mids and somewhat emphasised highs.

Disclaimer: the Brainwavz ZETA were provided for the purpose of this review by the European PR agency for the company. Please find additional information on the earphones on the manufacturer’s website. They retail for $20.

The packaging is surely unusual: the Brainwavz ZETA come in a plastic bag which holds the earphones, their accessories and the manual. Everything but the manual is wrapped in further plastic bags. Stock accessories for the Brainwavz ZETA include three pairs of silicone eartips, two pairs of silicone rings and a Velcro strap (which is unfortunately not secured to the cable).

The silicone rings include one pair with stabilisers and one pair without. The former is useful to keep the earphones from falling off.

The Brainwavz ZETA are fairly unremarkable in terms of design, as they have no unique features to set them apart from most of the competition. They remind me of the Superlux HD 381, but that’s just one example of similar products on the market. The plastic housings are almost conical in shape, as they made of cylinders that progressively increase in diameter, with a strain relief made of rubber in the lower side and the Brainwavz logo impressed on the back. As I mentioned before, the shells feature a rubber ring that improves the comfort and also allows for better stability if one chooses the one with a “wing” (pictured). 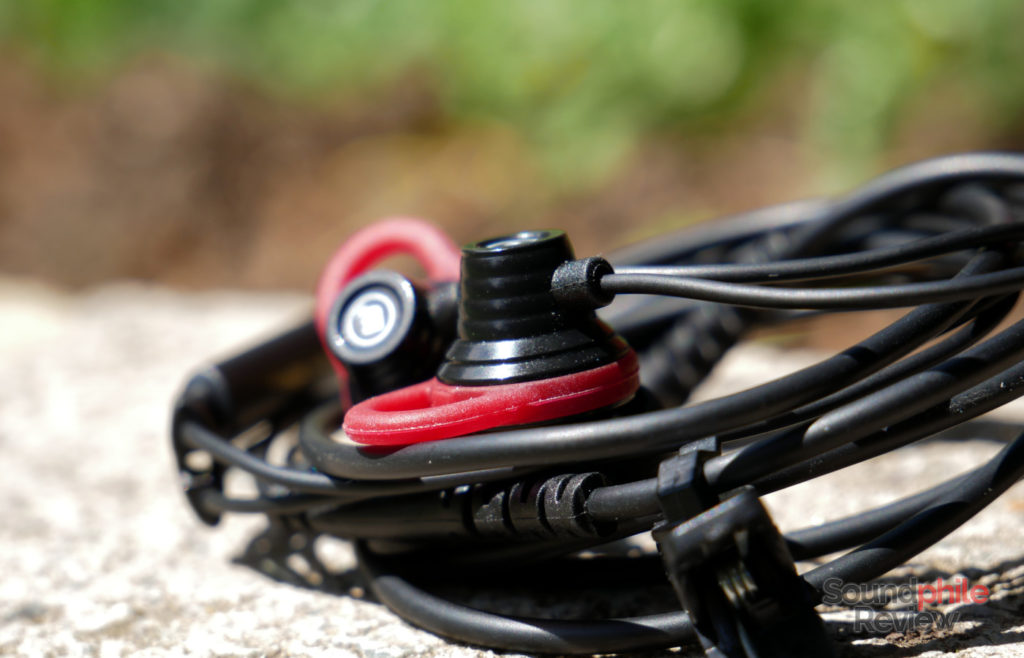 The build quality is what you’d expect of earphones in the sub-$20 price range: it’s acceptable and good enough not to make you worry about the earphones fall apart with use. The materials used are not refined nor especially good, but they do the job.

Comfort-wise, the Brainwavz ZETA fare fairly well, also thanks to the rubber ring. Their cylindrical shape also makes them fit well for most people, and the relatively little size also helps in this regard. So while they are not the most comfortable I tried, the Brainwavz ZETA are a viable option if one’s looking for earphones that can be worn for more than hours in a row. 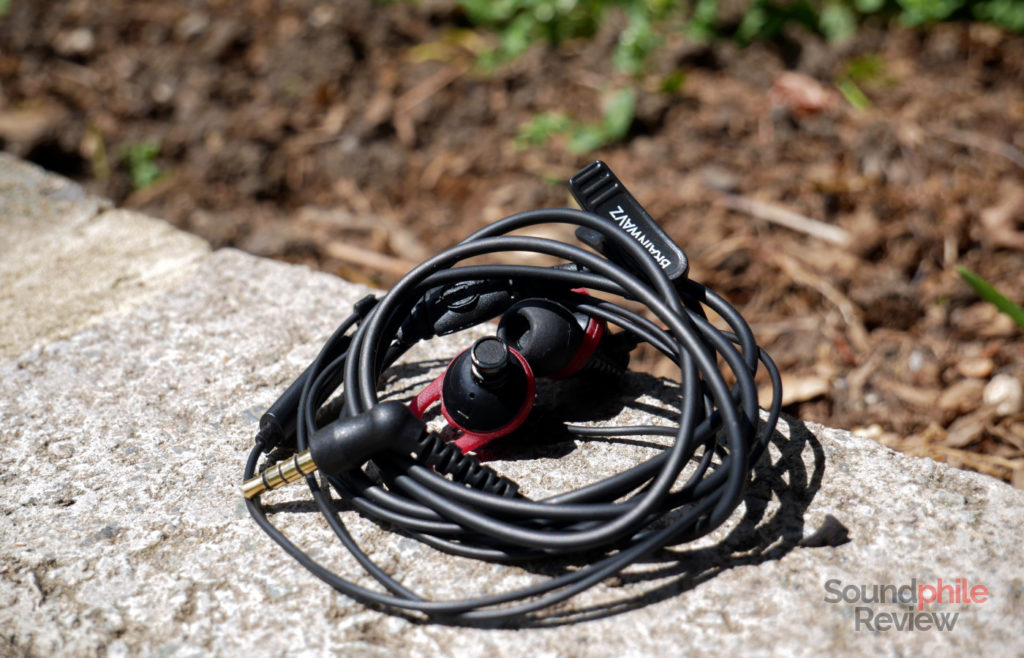 Probably due to the materials used to build them, the Brainwavz ZETA only offer barely sufficient isolation. That’s often the case with this kind of headphones, as their shape and materials can’t stop the sound from entering the ear. This could be a plus if you are looking for earphones that don’t distract you too much from what’s happening around you (e.g. if you are biking or you move in an urban environment). 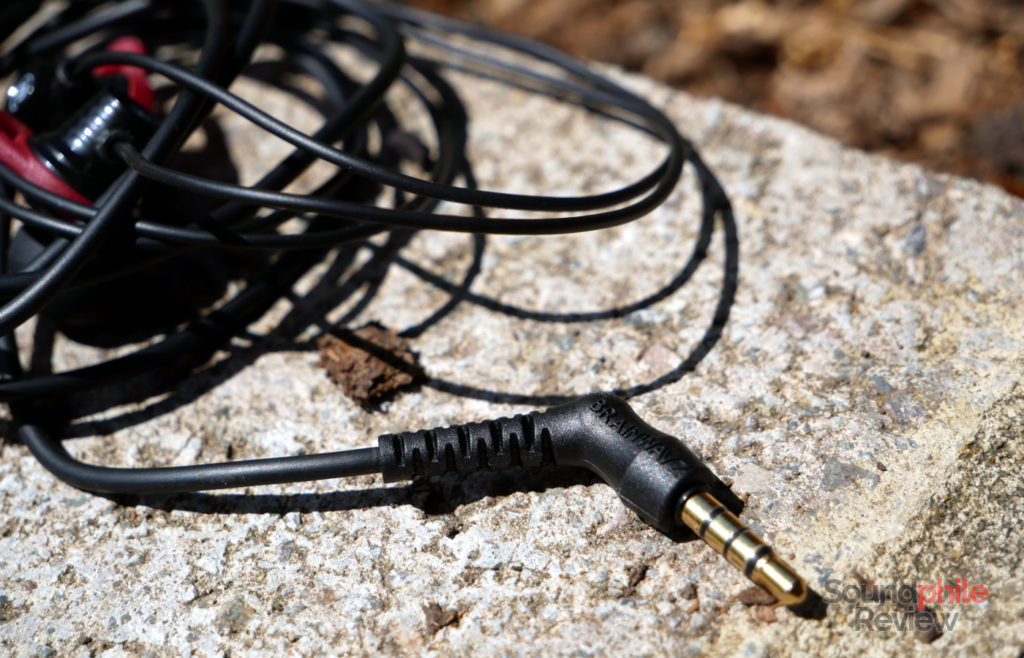 The cable is not removable and is thin, covered in black plastic with a slightly rubbery finish. This is a bit disappointing given how some competitors are able to provide removable (and slightly better) cables at similar price points, but it’s still a decent cable. There’s a chin slider which is, alas, a bit useless as it stops before the in-line remote on the cable leading to the left earpiece. The remote only has one button, so any volume adjustments must be made using the source device.

When testing the Brainwavz ZETA I used a Shanling M2X and an iFi xDSD as sources. Both were using FLAC files in standard resolution.

The Brainwavz ZETA are designed to be used with most devices including phones, computers and other mainstream consumer products (e.g. consoles, etc). They do work pretty well in that regard as they do not need amplification thanks to their low impedance and relatively high sensitivity.

The Brainwavz ZETA display a “mainstream” tuning, and by that I mean that they are tuned with a large emphasis on bass, a recessed midrange and loosely emphasised highs. There are a few odd peaks and dips that make the frequency response all but linear and coherent. When using the Brainwavz ZETA I get strong headaches which I ascribe to the large amount of mid-bass, so you may want to take this into consideration if you are sensitive to bass like.

Soundstage is relatively small, never extending beyond the sensation of music being inside your head but having a good sense of space anyway. It’s a small space, but it’s a space nonetheless – music does not appear as if it was in a single point. Imaging is sufficient, as the earphones place the instruments with slightly more accurate positional cues than just “left-centre-right”. Instrument separation is only sufficient as it is hampered by the frequency response, which almost hides some instruments and makes them difficult to hear. All in all, however, the performance of the ZETA in this field is quite good for headphones in this price range.

Bass is mostly concentrated in the mid-bass section, with a large bump that rapidly declines as the frequency goes down. In fact sub-bass presence is limited and it is almost not there below 50 Hz. From there upwards, however, bass becomes an untamed beast that sits atop everything else, with a volume boost that places it well above the rest of the spectrum. This emphasis leads to bass leaking over mids and being almost overly aggressive. The downside is that all this sheer power does not come with equal control: bass is in fact not well textured nor very detailed, although they retain some control that does not make them appear flabby. It surely sounds fun, though, and packs a real punch, especially if you pump up the volume a bit.

Midrange is recessed and very warm due to the descending curve from bass as it continues in midrange territory. There is then a new ascending curve near treble, so there is a bit of emphasis there, too. Mids appear to be far behind bass anyway and are often overshadowed by it, sometimes disappearing in the lower section under the pressure of lows. They are still decently detailed, so I could hear most of what was going on in tracks such as The Far Side of the World from the Master and Commander soundtrack.

Treble is… lacking, for lack of a better word. It has a small bump in the lower side, where it borders midrange, but then rapidly dissolves and is barely audible. Its weight in the mix is really low, and it offers little in terms of detail: it is mostly a cloudy rendering of high-pitched sounds with no real identity. If you’re just going for some easy listening while on the go, that’s perfectly fine.

Let’s compare the ZETA to other headphones:

The Brainwavz ZETA are not earphones for the faint of heart. They’re for those who like thumping bass that packs a punch. They’re earphones meant for fun, and they do a fairly good job at that. They’re in fact decent for the price, if you are looking for bass-heavy IEMs. On the other hand, they are unbalanced enough not to be attractive for those looking for something more linear and ideal for most genres.

The Brainwavz ZETA are earphones that many will like as their tuning leans towards the bassy side. They’re probably what most common people are looking for (with “common” as in “non audiophiles”), so if you want cheap earphones to have some fun with they might be exactly your cup of tea.