Can a ~10$ earphone be any good? The answer is – surprisingly – yes. The Superlux HD381 is a dirty cheap earphone which retails for ~10$, but the price does not say it all: it was a real surprise as I did not expect it would sound this good. It has got its flaws, but it is a nice product which can work as a cheap introduction to better quality audio or as a travel-friendly IEM one can worry not about.

Disclaimer: I received these earphones free of charge from GearBest.com. No return is expected.

Superlux is notorious for delivering cheap products, but they do not sacrifice accessories. The Superlux HD381 come with three pairs of silicone eartips of different sizes; each comes with its own colour, so that you can easily distinguish between them. A clip to fix the earphones to the clothes and to keep their cord tidy when they are not in use is a nice bonus. There is also an extension cable (female + male connectors): we’ll get back on that later. 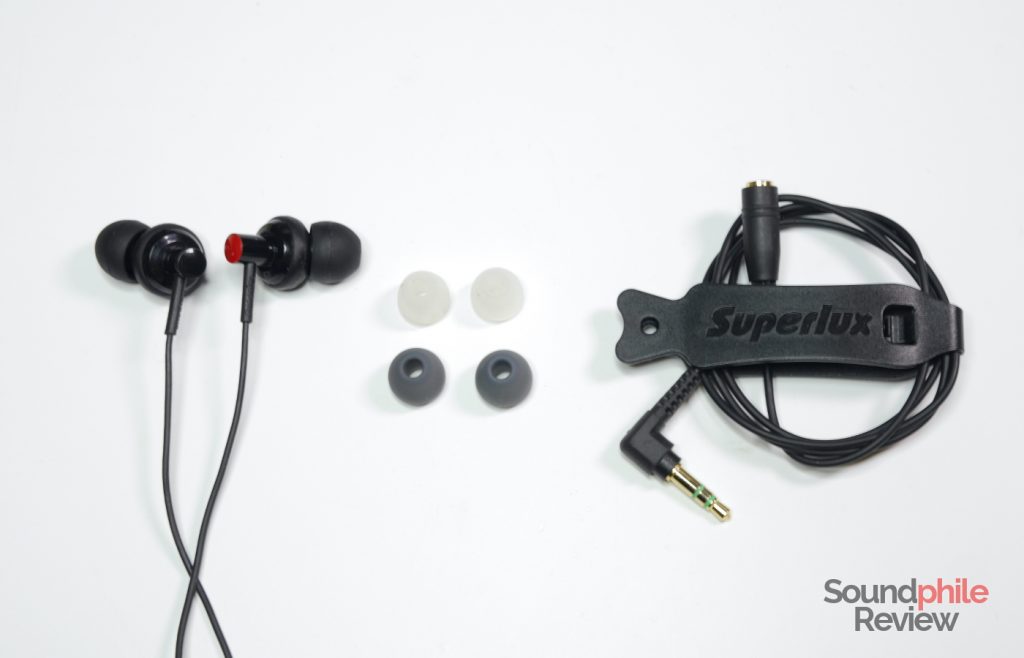 The only real clue these are budget earphones comes from their design and materials. There is no elaborate design such as the one we’ve seen in the Meze 11 Neo or in RHA T20i; they are simple to the point of being bare. They are made of black plastic, with the right earpiece having a red dot to better identify it. Everything appears to be following the saying “form follows function“, so little attention is directed towards design and details. I would also like to note that the cable inserts itself in the earpiece thanks to a rubbery tube, which is very flexible and adapts to the ear. The side facing the ears hosts two semicircle grilles, as these are semi-open earphones. 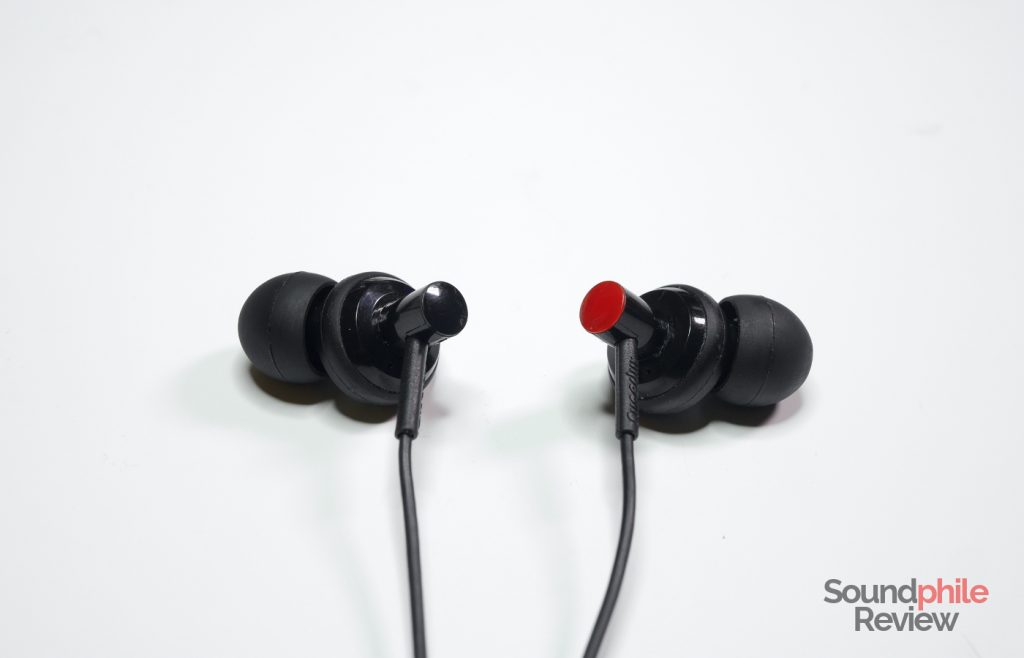 The cable is thin and appears to be frail. RHA T20i’s cable, although definitely not perfect, is very distant in terms of quality. I cannot comment about the cable’s durability in the long term, but it did behave fairly well in the weeks during which I’ve tried these headphones. The fact that it is divided in two, with one section being the extension cable I mentioned earlier, is in fact positive: even though it is thin and possibly frail, you can easily replace it with a more robust one. 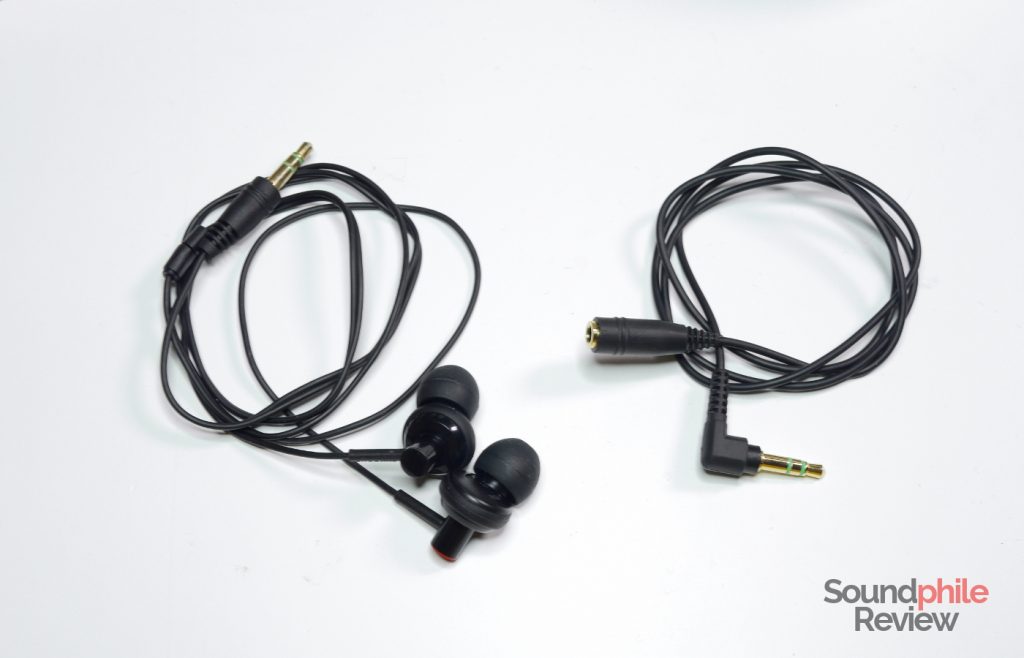 The cable is coated in plastic, a fact which has both pros and cons. It shows a bit of microphonics, but it is totally manageable using the included clip – speaking of which, I found it difficult to fix it to my jacket. I also noticed that the cable length wthout extensions (60 cm) is perfect if I want to connect the earphones to a device in my jacket’s pocket: it may well be a coincidence, but it may be not. 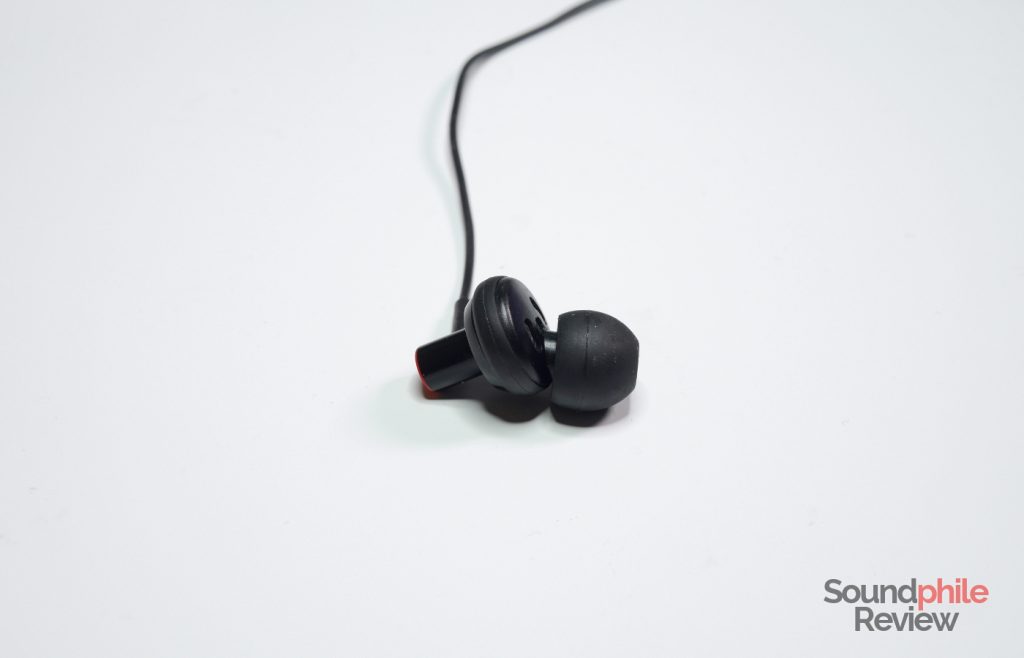 Comfort is good, but it could be better. While I would not say these are large IEMs, they are large enough to make my ears hurt a bit after a few hours of usage. There is a ring of rubber around the earpieces which softens them a bit and improves comfort, but it’s the shape and size that can be a problem. As comfort is a very personal matter, my words could not apply to others. 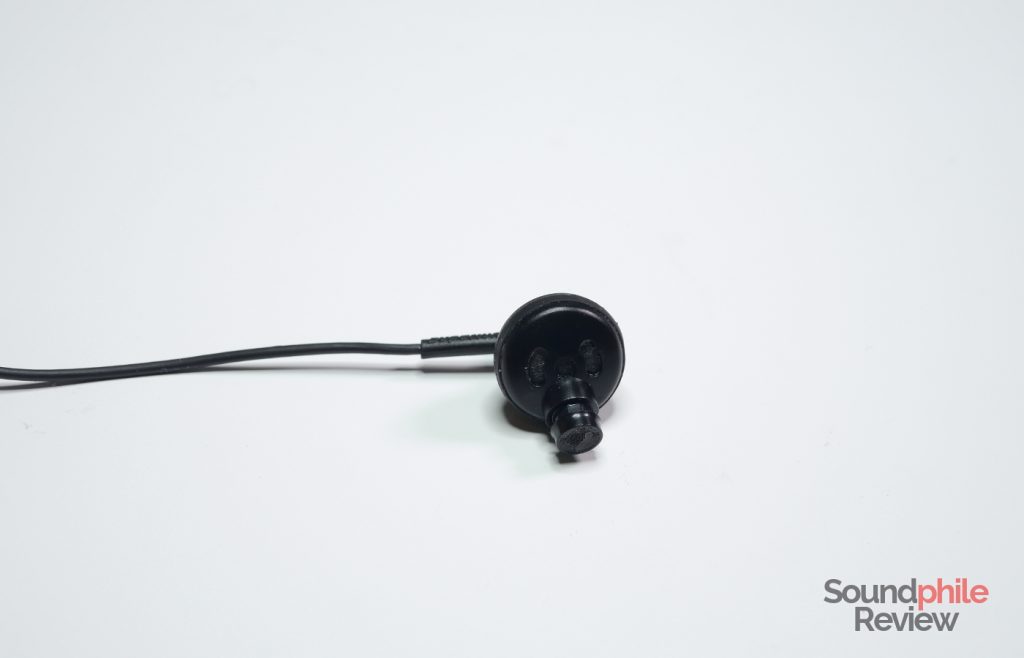 The Superlux HD381 are not able to exclude strongest noises (e.g. it cannot exclude all sounds when listening to music on the subway), although isolation is enough to isolate the listener in relatively calm environments, such as an office or a home. The semi-open nature is the main factor behind the relatively poor isolation. I have to say that I expected a much worse isolation given they are semi-open, but the Superlux HD381 can actually withstand usage in almost every condition without too many problems.

As usual, I burned the Superlux HD381 for 100 hours. I used a desktop PC with a Zorloo ZuperDAC and the ONN X6 as the main sources. I used FLAC and MP3 (320kbps) files.

The Superlux HD381 do not shine in terms of build quality or design, but they do keep in line with the firm’s fame of manufacturing products with good sound at low prices. These earphones have a full, rich sound with powerful bass, balanced midrange and acceptable treble, without sounding too dark or bloated.

Despite being semi-open earphones, the Superlux HD381 lack the usual airiness and spaciousness of this kind of headphones most of the time. The main complaint I have against the HD381’s soundstage is that it lacks depth, so everything seems to be flat and congested. Stereo imaging is not one of the qualities to look for in the HD381. Instrument isolation is very good for an earphone this cheap, but the sounds all seem to come from the same point inside my head (or just outside of it, in the earpiece) and that diminishes the overall details you can get from the music. Dynamic range definitely is not on par with other, more expensive earphones: the sound appears to be squashed against a virtual wall, as there is little distinction between loud and quiet sounds.

My impression is that the Superlux HD381 are slightly V-shaped, with an asymmetric V that shows more bass than treble. Midrange is not heavily recessed, though, and I think this fact makes them suitable for almost every genre excluding classical music. They are ideal for trip-hop, electronic music, rock, metal, rap and hip-hop – most modern genres, that is – but also for jazz, if you don’t mind the narrow and shallow soundstage. They are also what I’d call low-fi – fun and entertaining earphones, but definitely not what I’d use as my first choice because of the lack of details.

Bass is punchy and deep, but not bloated. In fact I find it pleasant and it is clearer and better controlled than the earphones’ price would make me think being possible. It actually is way more in quantity than in neutral-sounding earphones, but it also appears to add to the sound without subtracting any pleasantness or balance. These are not bass-centric earphones: there is more bass, but that’s it. Of course this is my opinion on the matter, and people looking for neutral earphones may dislike the added bass emphasis; I find it fun and engaging. In a sense, it reminds me of RHA T20i’s bass, even though it is less tight and precise.

It is full and warm, with decent depth; it is not made of obese low-mids, so it does not cover up the midrange – on the contrary, bass accompanies it. Transition from lows to mids is fairly smooth.

The Superlux HD381 do not follow the traditional V-shaped frequency response as the midrange is not very recessed – it may be just slightly so. Mids are somewhat dark sounding, and they’re not as sparkling and vibrant as I would like them to be. Increasing volume, though, they become more prominent and gain both impact and personality. Stevie Ray Vaughan’s guitar in Stang’s Swang is decently portrayed, even though the accompanying sax appears a bit dull. Voices are unconvincing: in (Da Le) Yaleo by Santana they are not bright and vivid, but tend to fade among the other instruments as they lack impact and roundness.

Treble is good for the price, but definitely not on par with more expensive options: it is not very detailed, while tonal balance is more leaning towards bass frequencies, shifting focus away from treble. It is well above what I would expect of 10$ earphones, but I found it to be a bit disappointing. In Aes Dana’s Conditioned – one of my favourites from the French composer – cymbals are not as clear and almost piercing as they should be, but they are dull and feel like a carpet of unintelligible high-frequency sounds without individuality.

As a side note, I found these are fantastic gaming earphones: it may well be because of their signature or because of the high amount of details they offer, but they are great when playing single player games (as they do not include a microphone). The only thing they lack is a wider sense of space, but it is in line with cheap full-size gaming headphones I tried in the past.

I do not have many other in-ear headphones with a similar price, so I will compare the Superlux HD381 with headphones under 100$ to try to give you a better idea of how they scale against competition up to ~10x their price.

When I first read the Superlux HD381 had “powerful bass” I imagined I would be met with a “consumer-sounding” earphone, one with bloated mid-lows such as those offered by Beats. I could not be more wrong. These are indeed earphones with bass that packs a punch, but they’re in a totally different league.

The Superlux HD381 may well be the earphone of choice for those who do prefer more bass than ideal neutrality, but I’d say it’s classy bass – and at a low price. These are a definite improvement over most of the cheap earphones you can commonly find in physical stores at a similar price point. They are also my recommended cheap earphones to use with phones: they are undoubtedly better than the ones included in phones’ boxes.