Hot on the heels of the release of the “s”-branded flagships, the RevoNext QT2s and the RevoNext QT3s, the American-Chinese company is releasing some new products to bolster their earphones offering. The RevoNext QT5 is, despite the name, a lower-end version of the aforementioned in-ear headphones that offers a single dynamic driver and a single balanced armature in a metal body. The execution is surprisingly good in every respect – save for the paint job which really does not do justice to the product.

Disclaimer: this sample was provided free of charge by the European PR agency for RevoNext. The QT5 retail for $30. Additional information is available on manufacturer’s website.

RevoNext really did not need innovation in this field, so it kept doing its thing. The package includes the earpieces, the cable, three pairs of silicone tips and a couple of leaflets. 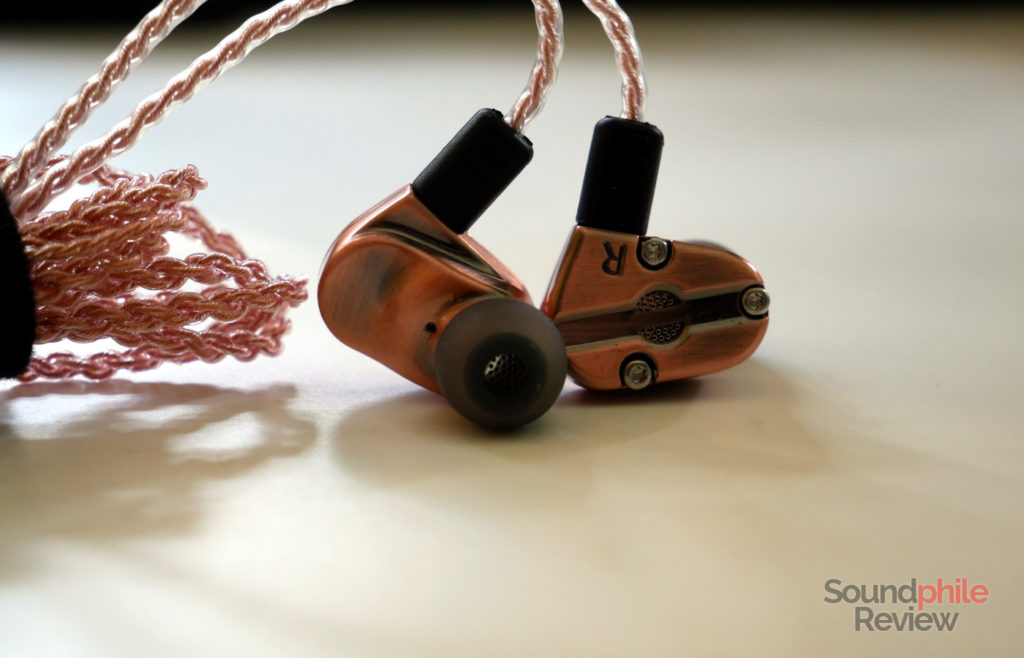 The RevoNext QT5 have shells which recall those of the QT2, although they’re a little slimmer and different in terms of decoration. The general shape is, however, really similar; the most significant difference is the lack of clear-cut edges, replaced by smooth curves. There’s also a stripe running on the faceplate and around the central grille. 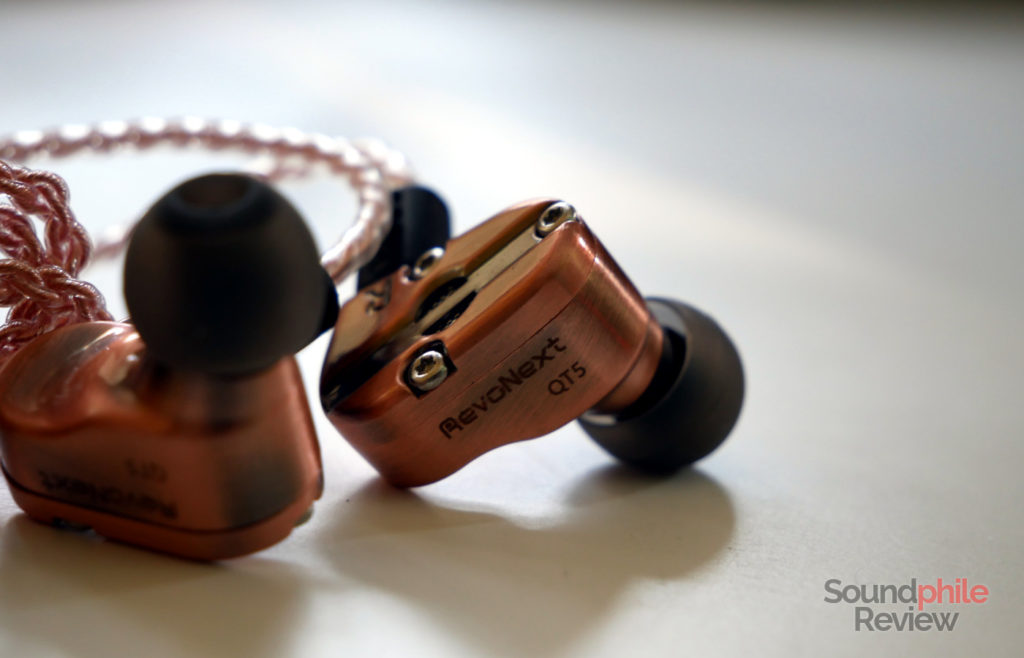 The other visible difference is the fact that the earphones are pink. They’re not flashy pink, but copper-like pink. It seems they were painted with a sort of glossy paint with a copper base. The look is certainly unique, but it’s not devoid of criticism because the paint job is not uniform and has imperfections: the stripe on the faceplate is not coloured at all on the right earpiece I got.

The other products by RevoNext I tried were definitely not the best on the market in regards to comfort. Their clear-cut edges caused discomfort really quick to most people. Thankfully, QT5 are different. The use of rounded shapes makes the shells comfortable enough for them to be wearable for a couple of hours before I need to move them because of slight discomfort.

Isolation is quite reduced: it seems that the grille on the faceplate makes the earphones semi-open, so there’s no real isolation as sounds are allowed to enter almost freely. I wouldn’t recommend using them in noisy places.

The cable is quite different from those used in previous products and, in a certain way, it’s better. It’s similar to the cable used for the “s” earphones. It is made of four braided cores, each individually sleeved in transparent plastic, of bright copper colour. After the Y-split the cores are divided into two groups of two cores each. The Y-split and all the other junction elements (the jack and 2-pin connectors) are made of black plastic, and the jack is right-angled.

Listening tests on the RevoNext QT5 were performed using various sources, including an iFi xCAN, a Shanling M2X and an xDuoo XD-05. Fikes used were mainly 16 bit / 44.1 kHz FLAC files.

The general sound signature of the QT5 is similar to that of the other products by the company: V-shaped with some additional emphasis on treble. Luckily, that emphasis is well done and the signature as a whole stays relatively balanced. There’s also good coherence, so the instruments (and especially the voices) sound relatively natural.

I find RevoNext QT5’s technical ability to be incredible for the price range. Although soundstage is not too large (it’s still more than decently wide), imaging offers positional cues that place instruments across the stage in a slightly more refined way than just front, left and right. What’s most surprising is instrument separation, which really lends clarity to the sound as it allows one to differentiate the instruments with ease. This is really a full notch above what I would expect of earphones in this range and it is probably more common in the ~$100 range. Yes, it’s that good!

Bass is surely emphasised and maybe a bit overstated, but I find this emphasis to be done well as it never translates to a dark, claustrophobic signature nor to bass being aggressive and leaking over mids. It’s always in control, so it never gives the listener the impression of being excessive – despite being more than enough to satisfy those looking for added bass. It’s got a punchy nature, as its good speed leaves ample room for it to kick hard and to be fun. That’s alas not complemented by a good level of detail, which is somewhat limited; that’s especially noticeable when numerous instruments are playing and the earphones struggle to keep up with them.

Midrange is a bit V-shaped, so the lower and upper sections are a bit further forward than the middle one. Midrange sits behind bass and treble, but I have to note that this recession is not extreme, so midrange is still clearly audible. This is (a bit ironically, given that it’s recessed) probably the best part in how the RevoNext QT5 sound. Midrange is in fact clear and clean, with a lot of detail and good tonality. The main appeal of the midrange is the fact that it sounds clear and spacious.

Presence in the upper area is a bit emphasised and that’s a fact. What’s interesting to note is that it never translates to fatigue or to harshness, instead only leading to sounds to emerge a bit better from the mix. Cymbals are clearer in the mix, and so are other instruments that dwell here. There’s some good detail to be found here, although it’s limited and it can’t really display everything that’s going on; micro-details just aren’t there. Treble offsets bass well and adds a bit of air, although it does so in a limited fashion as extension is not exceptional.

Given its signature, I would recommend the QT5 to those who look for a fun IEM and listen to modern genres – if added emphasis on bass and treble is your cup of tea, basically, these may be your earphones.

Here’s a brief comparison with other in-ear headphones on the market:

I found it a bit odd that RevoNext decided to use a higher number for a lower-tiered product, but that matter aside I had high expectations on the RevoNext QT5 – and I was not let down. The QT5 are very good in-ear headphones on all fronts, be it build quality (though better checks for painting consistency might be needed) or sound quality. They’re fun earphones that are (unexpectedly) incredibly easy to enjoy thanks to a sound signature with some emphasis on bass and treble that never becomes unbalanced and unpleasant.