The consensus around the KZ AS10 is that the earphones are balanced and pleasant, with most people (including myself) arguing they might be the best earphones made by the company until now. So it’s only natural that KZ took the opportunity of creating a new set of earphones with similar tuning and a more affordable price. Thus the KZ AS06 were born. They shun two balanced armatures in each earpiece but keep a similar approach to tuning.

Disclaimer: the KZ AS06 were provided by Lillian at Linsoul Audio. They sell them on both AliExpress for $43. 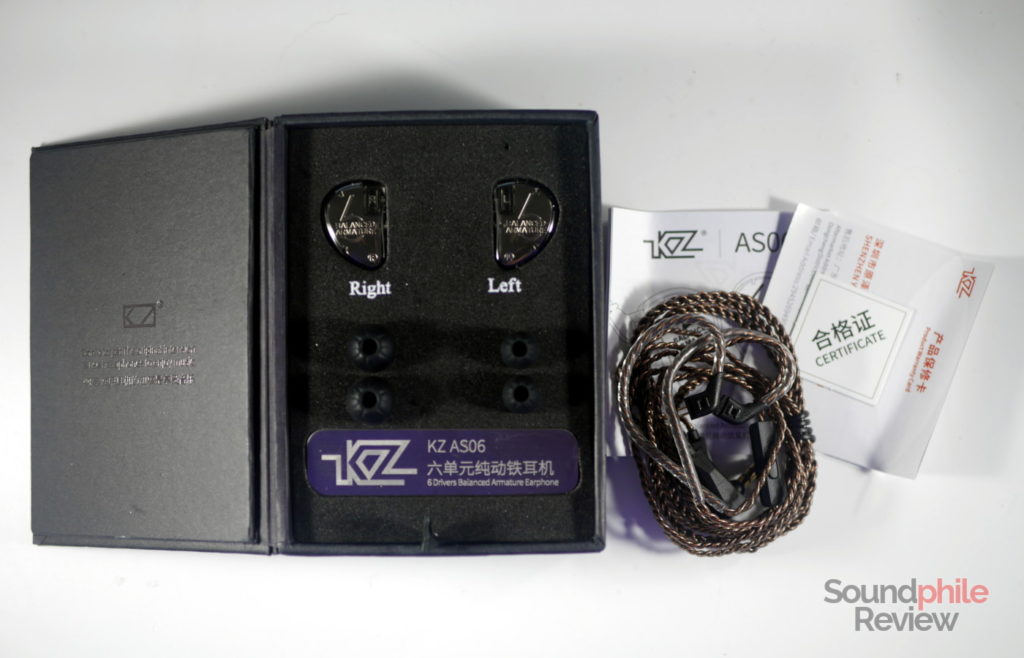 The KZ AS06 is basically an AS10 reduced in size, and that applies to the packaging as well. The box is in fact a smaller version of that used for the AS10, with the same styling and similar content. The black cardboard box holds the earphones, the cable, silicone eartips in three sizes and a leaflet with the user manual. This is the usual set of accessories for KZ earphones, so there’s nothing new on this front. 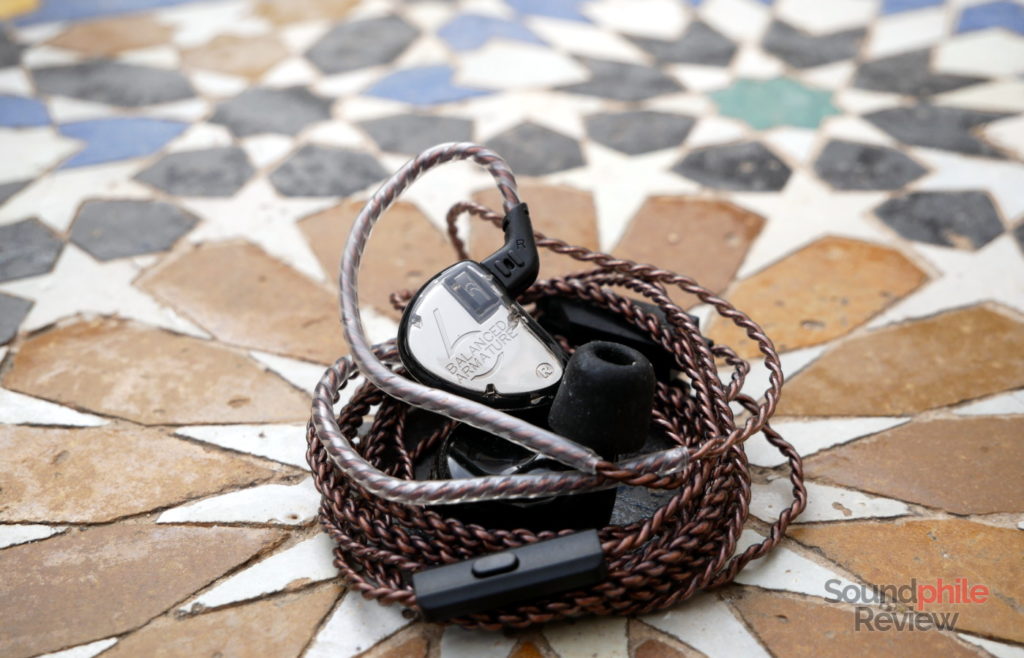 The KZ AS06 inherit the general shape and design from their bigger siblings the AS10, but they have their own twist on it. They have a metallic plate on top of the PCB with a big “6” etched on it and accompanied by the “balanced armature” text. KZ makes it very clear that the AS06 are in fact completely based on balanced armatures, that’s for sure! The metallic plate comes as big news in KZ’s design and makes the AS06 quite unique in terms of how they look.

The earphones are made of plastic: the faceplate is transparent, so you can see the aforementioned metal plate, while the rest is black. There is also a version with solid cerulean housings and transparent cerulean faceplates. Quality of assembly is good, but only limited to the price range the KZ AS06 are in. They are in fact well built, but still made of what appears like plastic that is a bit cheap. 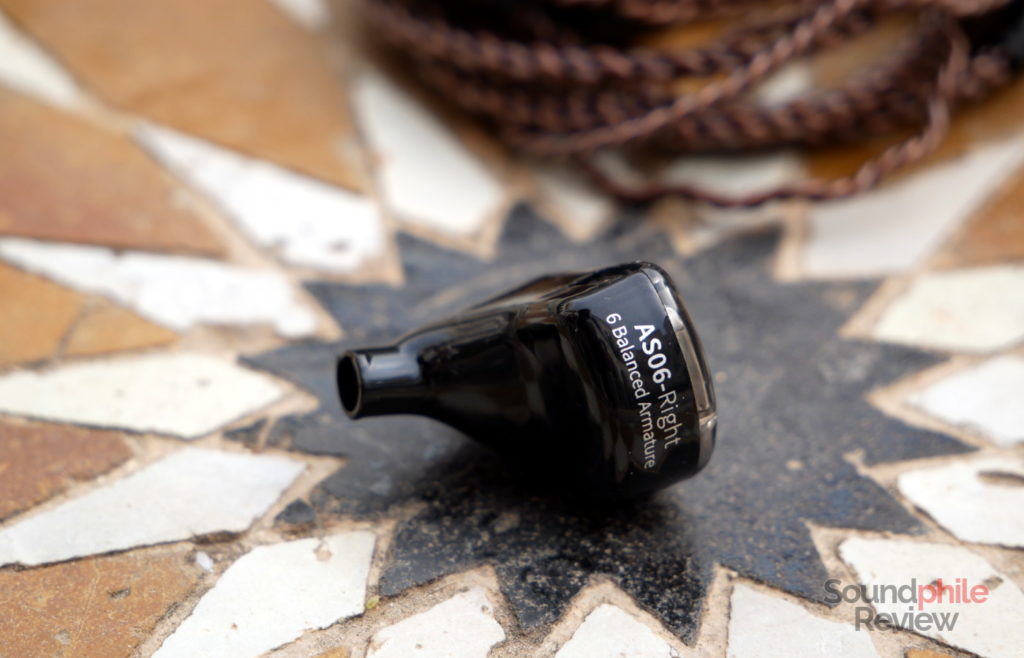 The choice of leaving the end of the nozzle without any protective grille remains on the AS06, like on the AS10: the implied risk is that the nozzle may become full of dirt over time.

Comfort is really good: the shells are small and their shape makes them easily adapt to the needs of most people. Using them for two or three hours without feeling any fatigue is not science fiction and in fact I kept the earphones on for multiple hours in my time with them.

Isolation is not exceptional, but still more than acceptable when using foam eartips. I used them on a flight and was satisfied with the reduction in noise. Using them on public transport or in other noisy situations is not an issue at all.

Keeping up with KZ’s tradition, the cable connectors use two pins. The connectors are on one side, so cables with a long and straight terminal will probably be uncomfortable to use. The cable itself is the same KZ has been using since the debut of the KZ ZS10, with four braided cores that then split in two groups of two cores after the Y-split. The only notable difference is the use of pre-moulded plastic for the ear hook, which makes the cable much more comfortable.

I used the following sources when testing the KZ AS06: xDuoo X10T II with an RHA Dacamp L1, Shanling M2X, iFi nano iDSD BL and Topping DX7. I often used an iFi IEMatch. FLACs in standard resolutions were the main source of music.

Just as the AS10 offered 10 balanced armatures summing the two channels (so 5 per channel), the KZ AS06 offers a total of six drivers with three per channel. Each driver reproduces a portion of the audible spectrum – that is, one is for bass, one for midrange and the third for treble.

Just like the AS10, the KZ AS06 come out as well balanced IEMs with some colouration that, however, keeps the overall balance in check. What I mean is that there are no excesses, neither as peaks nor as dips. It seems like KZ is better at tuning earphones with balanced armatures only than they are at tuning hybrid earphones, looking at how their balanced armatures earphones are much more balanced than the hybrid ones.

Although they are in the lower tiers of the headphones market, the KZ AS06 show a bold technical ability. Their soundstage (or headstage, if you prefer) is not extremely wide, but it’s still more than capable of delivering a wide enough stage not to make music feel compressed or squashed. It can actually feel quite large, especially in depth, as it can make the sound sound like it was being played in a large room (as in Mayhem’s Bloodsword and a Colder Sun or Azymuth’s Avenida das Mangueiras). Imaging has decent accuracy in positioning instruments on the stage, but it’s not able to deliver overly accurate information. Instrument separation is also good, but still limited compared to higher-end products: in crowded tracks some bits are lost in the mix.

Bass reaches down to 40 Hz, but only starting from 60 Hz it is fully audible. This gives the sound a solid foundation. Bass is not quite neutral: in fact it’s a bit elevated, especially in the mid-ass area, so it sounds more present (and sometimes more invasive, if the track already has a lot of bass in it). It is never overbearing, though, and it never spills over the mids, so the sound as a whole stays clean. It also is quite good in speed, as it delivers fast transients that sound clean and accurate, but it also is almost the stereotypical balanced armature bass as it has no physicality whatsoever. It’s more “clinical” than fun, despite its elevation. What surprised me is the detail, which is way above what I would expect from earphones in KZ AS06’s price range.

Midrange is at least as fast as bass, if not more, again as a proof of balanced armatures delivering fast yet not physical sounds. It sits behind bass, though not by a wide margin; recession is in fact very slight and barely noticeable most of the time. Mids appear to be mostly neutral to me, with a slight warmth if there’s any colouration at all. This makes instruments always clearly audible and clean. The level of detail is good, but still limited: there is little in terms of smaller details and nuances, such as the pick on guitar strings or the sticks bouncing on the leather of drums. This creates a situation where midrange is not as clean and rich as it could, but still highly enjoyable and detailed enough to be pleasant.

Treble presence appears to be a bit limited in the upmost area: if you listen to Noah Visits from The Village‘s OST, you will notice the tinkles are barely audible until they become lower in tone and more intense at the end of the track. This is in contrast with the prevalence of lower treble, which is a bit elevated and often more than in a perfectly neutral tuning. It’s still pretty much enjoyable, mostly thanks to the presence of very little sibilance and of a host of details. If there’s one area where the KZ AS06 are good, then that’s treble detail: they’re really great for the price, also considering the fact that extension is overall good and therefore there’s good “depth” of the sounds too. Highs are not exactly sparkling, but they’re surely airy and open-sounding.

Here’s a brief comparison with other earphones:

There’s very little not to like in the KZ AS06. In fact they may be KZ’s best earphones alongside the AS10 and BA10 – they’re all earphones with balanced armatures only, so you may see a pattern here. The result is really likeable and up there with the best KZ has to offer. Its balanced tuning is not devoid of fun, given the emphasis on bass, but it always keeps everything in check to reach a good compromise between fun and fidelity. At around $40, there are few other options that are this attractive and the KZ AS06 become my recommended earphones if you think the similarly-priced Tin Audio T2 is too bright for your tastes.