HiFiMAN’s tribute to the Sony MDR-R10 comes in two headphones, one with a planar driver and one with a dynamic driver. This gives them very different acoustic characteristics, despite the design being the same. The HiFiMAN HE-R10D are the model equipped with the dynamic driver, as suggested by the “D” letter in the name: they’re something that’s not always seen by HiFiMAN, which is specialised in planar drivers, but they are indeed very nice.

There’s been some controversy around the HE-R10 headphones as the design is a faithful reproduction of the Sony model, from which they also take their name. This is because the patent Sony held on this design has now expired, so HiFiMAN decided to use it to create this tribute.

Disclaimer: the unit used in this review was loaned to me by Mark at HiFiMAN Europe. The HE-R10D retail for ~$1,300. As is customary for HiFiMAN high-end headphones, the HE-R10D come in a cardboard box covered in faux leather, inside of which are the headphones together with three cables: on the headphone side is a single 3.5 mm TRRS jack connector, on the other side are a 3.5 mm TRS connector, a 6.3 mm jack or an XLR4 connector. There’s also a Bluemini device so you can use the HE-R10D with Bluetooth, but there’s no USB cable to charge it. 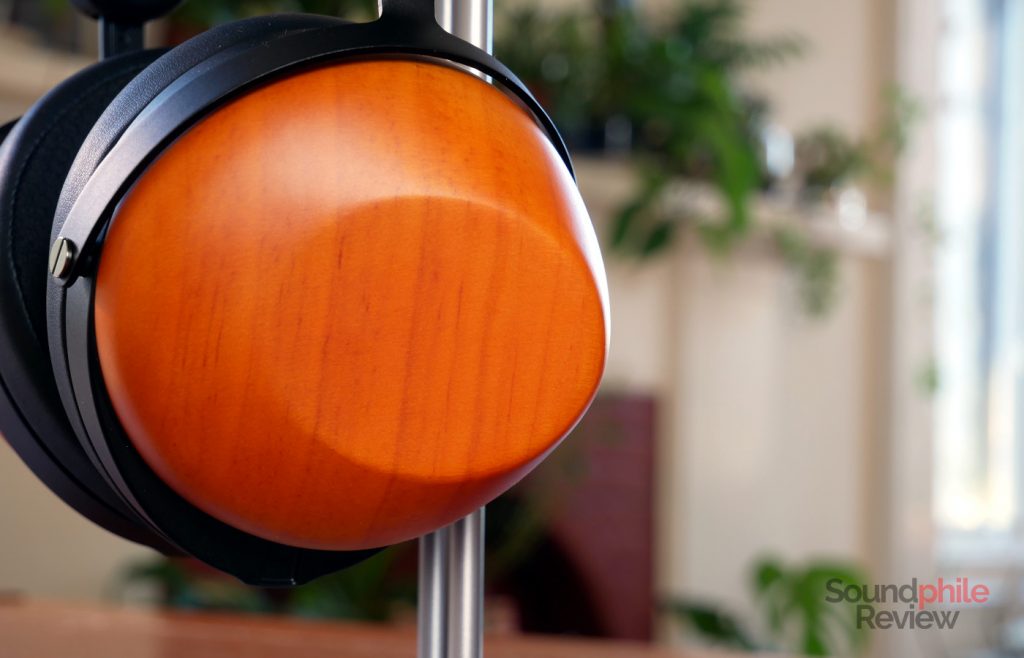 The HiFiMAN HE-R10D replicates the design of the Sony MDR-R10’s earcups and does so quite faithfully. I already wrote a fair bit on this in the HE-R10P review, so I suggest you to take a look at that. To sum things up: the wood is gorgeous (and quite a bit lighter in tonality than on the R10P), the removable earpads finally do away with the plastic frame to marry an easier Velcro-like system, and the headband is the same of “cheap” models such as the Deva, the HE-400i 2020 or the HE-400se. Overall I’m not impressed with the build quality, although I really like the design. 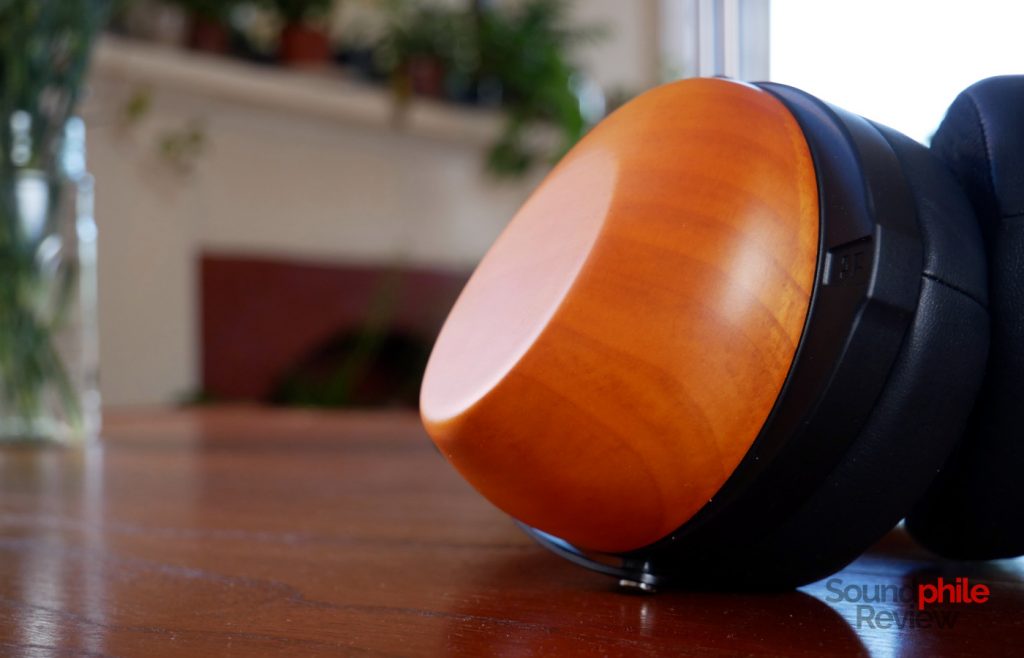 Although I don’t really like the headband because it’s nowhere near as comfortable as the old ones used e.g. on the Arya or the original HE-560, the weight of the HE-R10D (~352 g without cable) is such that they stay relatively comfortable for about an hour before my very sensitive scalp starts protesting. Overall I deem this quite a good result, as other people will probably find these headphones decently comfortable for longer periods of time (comfort is quite subjective, but my preferences/needs in these area are a bit extreme so I know other people usually complain less than I do). One thing I wish improved is lateral clamp: there is basically none, so the scalp has no help from that.

This also has an impact on isolation, which is very limited. This is possibly due to two factors: on one hand the earcups not providing much isolation in the first place, on the other the lack of clamping force that makes the earpads just touch the side of your head rather than properly adhere on them. 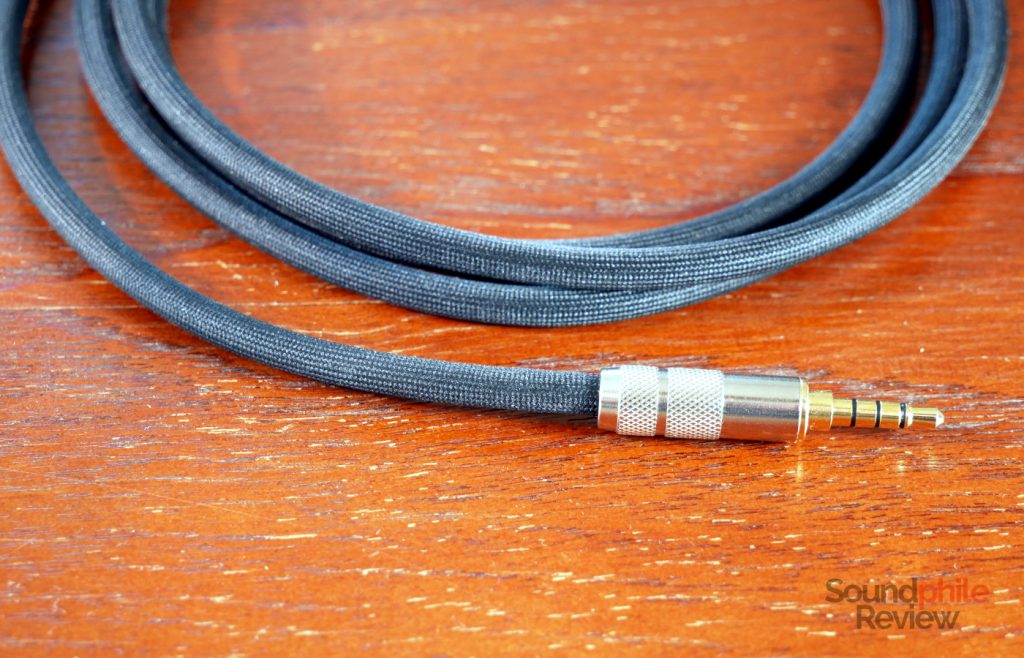 The set of cables in the box is well-made, with a certain softness that makes it easy and pleasant to use them. They’re covered with a fabric sleeve and the connectors are all made of metal. They feel like premium cables as they should. The only complaint I feel like making is that there is no small-size balanced option like 2.5 mm TRRS or 4.4 mm.

I did most of the listening tests with the HiFiMAN HE-R10D using a Topping DX7 plus a Drop THX AAA 789. Most of the music files were CD-ripped FLACs.

The HiFiMAN HE-R10D are quite easy to drive, with an impedance of just 32 Ω and a sensitivity of 103 dB – I’ve tried IEMs that were harder to drive! The driver itself is 50 mm in diameter and uses HiFiMAN’s “topology diaphragm” technology, which uses nano materials to coat the diaphragm and therefore influence its sonic properties. What emerges from this is a warm and lush signature with lots of details and a very good punch. 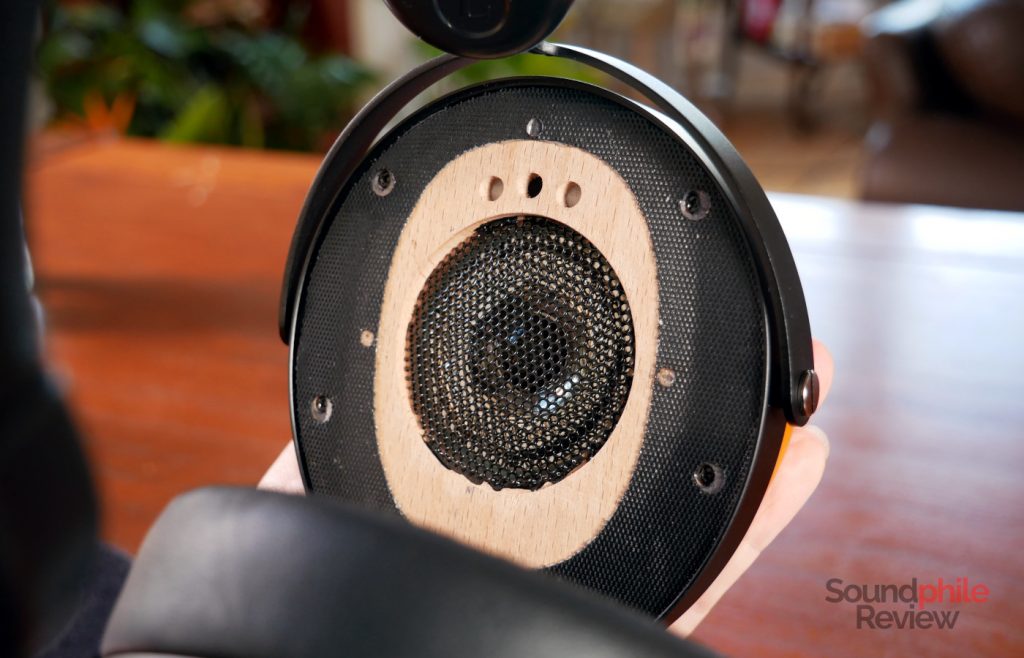 Soundstage is quite wide for a closed-back headphone and it is, in fact, wider than that of some open-back ones. It has a very good amount of depth as well, something which helps with imaging as well. On some tracks imaging is in fact out of this world. In Astropilot’s Inverted Worlds I had a hard time remembering that I was wearing headphones and that the sound was not coming from the speakers in front of me. The thing is that I get this impression from multiple headphones and earphones, but it usually fades away after a few seconds – my brain says “nope, you’re not fooling me, I understand I have headphones on” and makes the illusion vanish. With the R10D the illusion stays, which is remarkable in and of itself, though it is admittedly more present on some tracks. In other they “just” sound as very competent headphones with superb imaging. Instrument separation is so good there’s a very clear differentiation between the various parts that allows you to pick any instrument and follow it with absolute ease.

If you are looking for a tight, well-controlled and physical bass response, the HE-R10D delivers exactly that. They offer a bass section that is a bit emphasised, especially in the lower mid-bass region, lending warmth to the sound as a whole. In Friedrich Gulda’s Light My Fire (from the wonderful As You Like It album) you can really feel the impact of the drum hits and especially of the bass drum; they really have a physical presence of their own that hits you quite hard. The lows reach the lowest depths with good authority, keeping a very good volume and detail level for a dynamic driver; the layering is very good, so the notes do not undergo the watercolour treatment to become mixed and blurred as the frequency goes down. On the contrary, tracks with a lot of deep notes stay clear and clean: Master Margherita’s Lowland Areas (First Light Mix) is rendered in all the beauty of its warm, earthy tones. There’s also a great level of detail, with a lot of micro-details emerging clearly: one good example is Azymuth’s Avenida das Mangueiras, with its slapped bass that’s clear and clean.

Midrange is a bit weird, as it has a certain warmth but also a certain brightness, with the middle region being a tad recessed compared to the other two. It’s still balanced in the overall sense, as no single part prevails strongly over the others; it seems like HiFiMAN took its classic signature and just dialled the lower mids up a notch, getting a result that will probably please those who find the usual HiFiMAN signature too bright. Mids are also mostly in line with bass, while the middle region of treble manages to come out on top at times. Midrange offers a very good level of detail without sounding overwhelming: the resolution is enough to showcase even smaller details and the overall presentation feels quite coherent and smooth. Again, physicality is quite good and lends good punchiness to transients.

Treble is the area which can be a bit problematic: although it does not have any dominating peaks or dips that would make it fatiguing or lacking, it still has a couple of rough edges. In fact, it can be a bit intense at times: in Azymuth’s Fly Over The Horizon (Voo Sobre O Horizonte) the cymbals are a bit aggressive, though they are still in the background and this helps not perceiving them as excessive or harsh. Those who like a more relaxed, laid-back treble will find that the HE-R10D may not be their cup of tea. On the other hand, though, it has a generous amount of details and micro-details that emerge clearly from the mix, even at lower volume levels. Extension is sufficient to lend the sound enough of an open, airy feeling, which somewhat counterbalances the warmth of bass.

The inevitable comparison is with the HE-R10P, but let’s throw in a couple of other models as well:

The HiFiMAN HE-R10D are probably less divisive than their pricier planar siblings and they arguably deliver better value. Their gorgeous wooden cups are a sight to behold and their technical ability and resolution are commendable. Their sound signature is relaxing and pleasant independently of what you throw at it, with a rendition of lower frequencies that is skilful and punchy. Still, despite being very pleasing to listen to, they don’t excel at anything and have a treble region that some may find unappealing due its emphasis on the middle region. Their build quality is also questionable, especially when it comes to the headband that’s the exact same as models costing one tenth the price.

I’ve really enjoyed listening to the HE-R10D, to the point I would love having a pair of my own: their tuning is certainly coloured and distant from an ideal neutral setting, but it’s exactly this that gives them character and positive distinction from the rest of the market. Still, their ~$1,300 price is still quite steep and has them battling with other excellent names that can do many things better – in primis build quality and comfort, I’d argue. It’s then quite hard to judge these headphones: in my opinion they hold their own against the competition, but are very good only for some things. They are probably best as companions to other, more neutral headphones.

Considering their relation to the MDR-R10, allow me to paraphrase Tenacious D: “these are not the greatest headphones in the world, no, these are just a tribute.”