The Venture Electronics BIE were born a couple of years ago as the “Bonus IE”, a pair of earphones meant as a bonus given when you bought other products. Funnily enough, they had quite a large success and this led VE to further develop the concept and thus were born the Venture Electronics BIE Pro. The new model features the same shell design as the previous one, but everything else has changed – let’s see if it’s for the better!

Disclaimer: thank you to Lee at VE for sending in a free sample. He sells the BIE Pro for $69.80 in his special “stay at home listening to music so you don’t go out and get coronavirus” initiative. 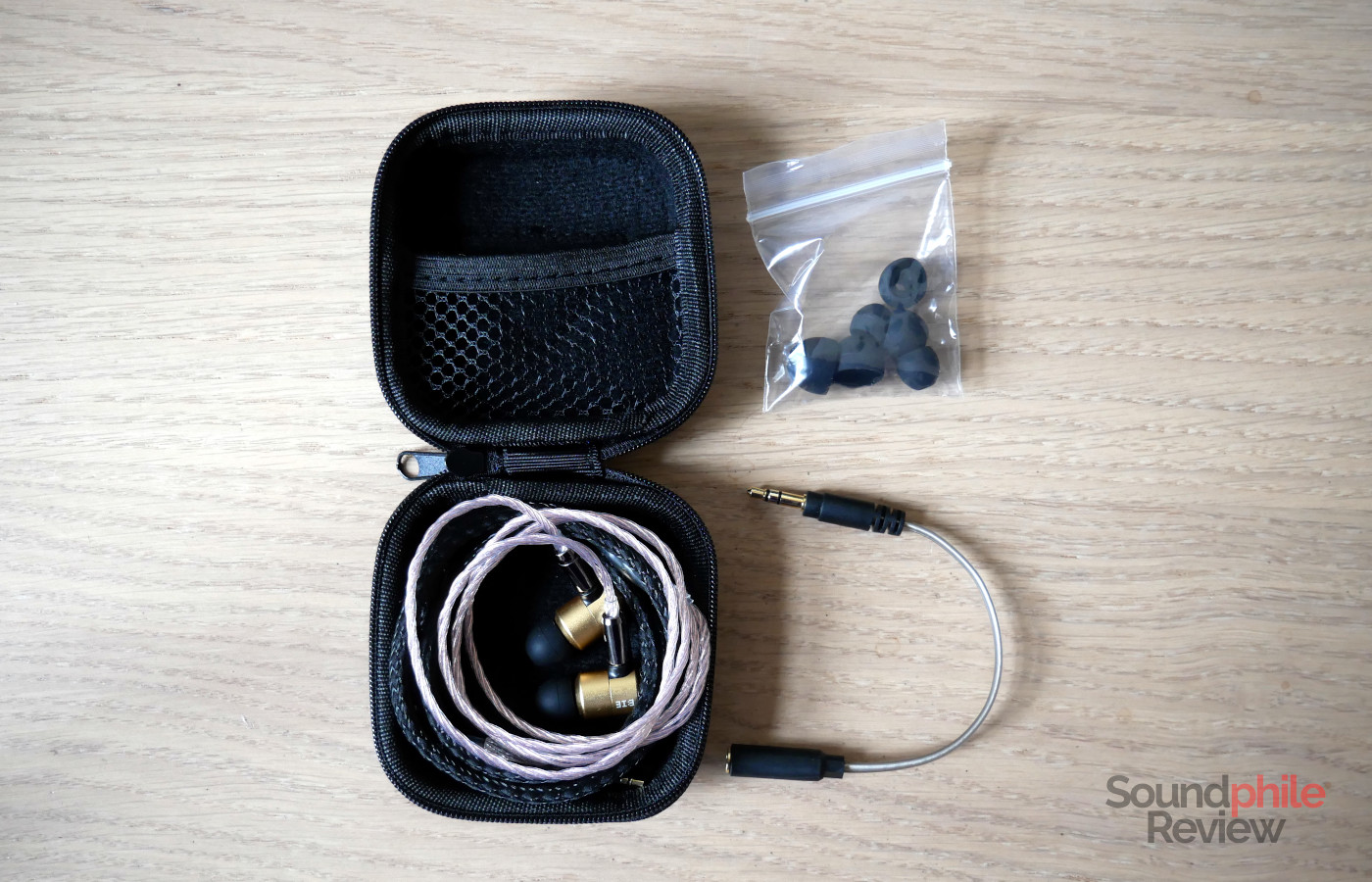 The Venture Electronics BIE Pro come in VE’s usual denim-covered hard case, with a set of three silicone eartips. In my case they also came with an adapter to 3.5 mm jack, as I opted for the 2.5 mm jack cable termination. It’s a barebone accessory set, but it gets the basic stuff covered. 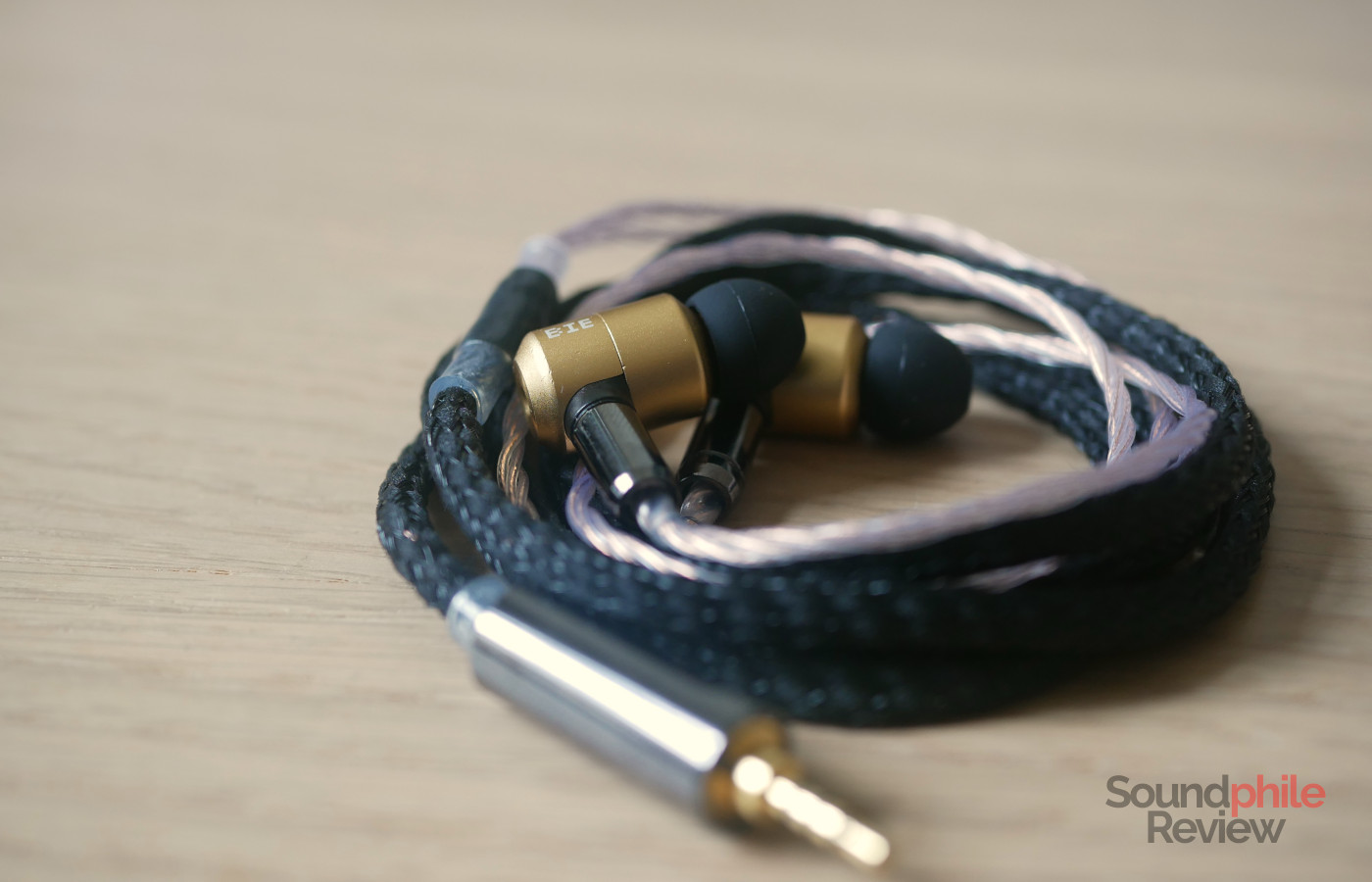 Venture Electronics chose to stick with their bullet-like design for the shells of the BIE Pro, so design is identical to the previous model. That’s quite a good thing, as it is a very comfortable design that’s also quite versatile, as it allows you to wear the earphones with the cable either dangling or around your ears. The only major difference is that the BIE Pro are gold in colour, with the “BIE” text printed on one side of the shells. 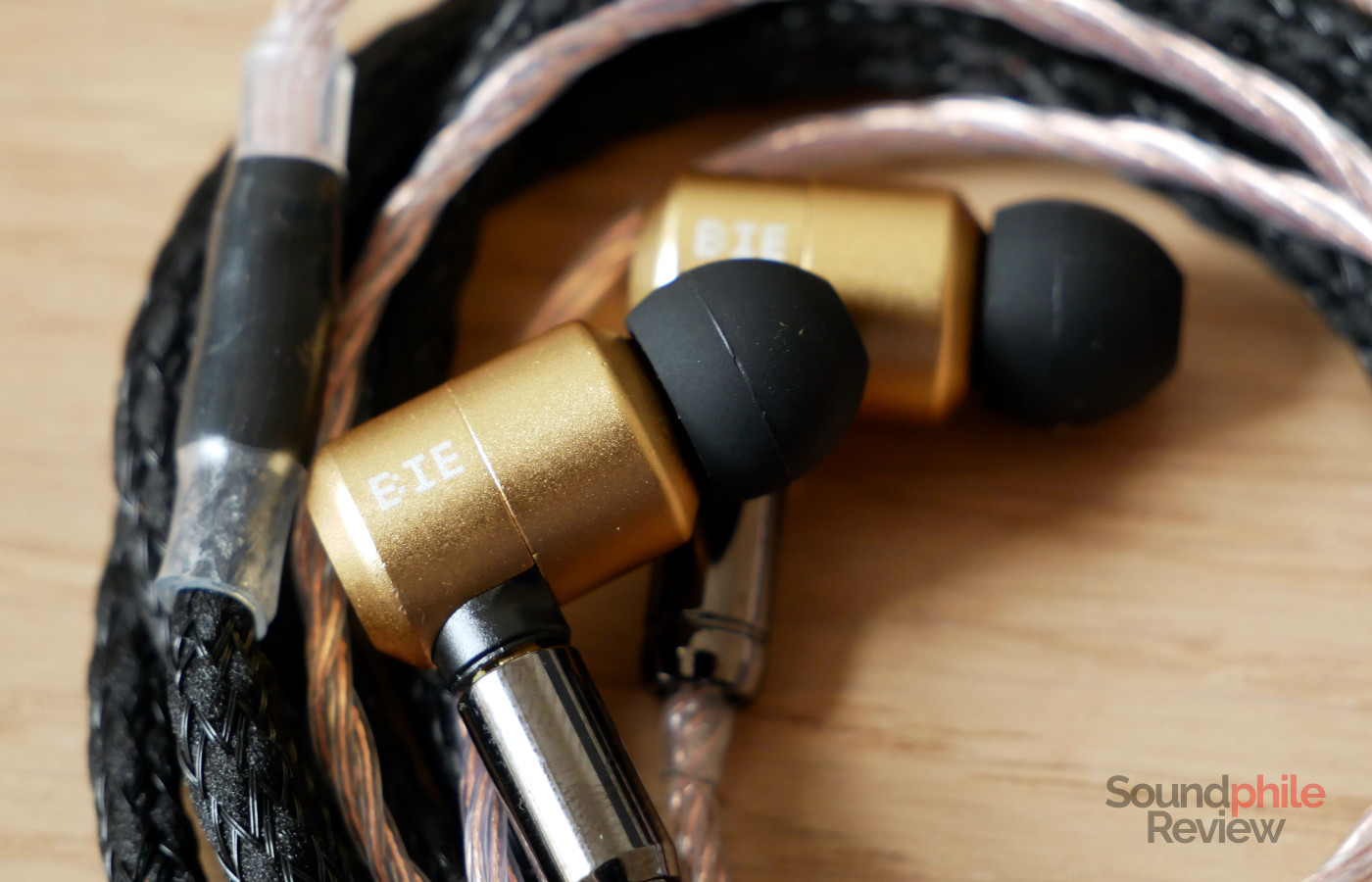 Just like with the previous incarnation, the BIE Pro’s shells are made of two pieces of aluminium, with a hole surrounded by machined circles on the back. The two pieces are clearly visible, so the joint is not seamless, but the build appears to be quite solid as in VE’s tradition.

One of the things I’m not especially fond of is the fact that there’s no easy way to tell the two earpieces apart. As they are identical with no markings to distinguish between left and right, you have to rely on the small print on the MMCX connectors’ housings. This is easier said than done though, as the print is quite small and in a colour (a faint white) that’s easy to miss on the highly reflective metal surface. It is then quite ironic, but also quite telling, that I noticed while writing this that the left channel has a small dent on the MMCX housing while the right channel does not – this is ingenious, but it took me more than a month of almost-daily usage to realise this. Either I’m not that bright (hey, I’m not a lamp) or this design could do with some improvements (another distinct possibility). 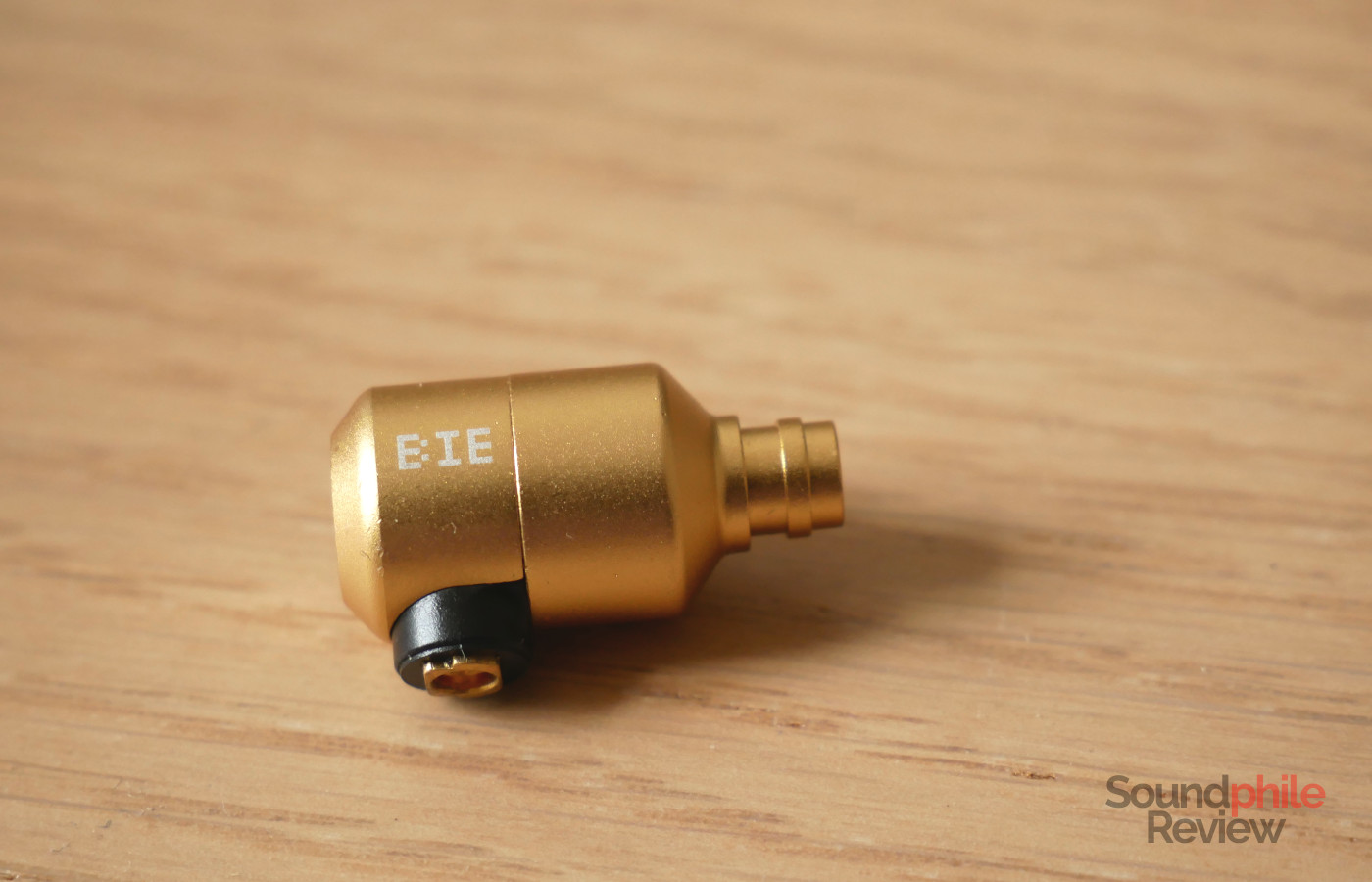 Comfort is quite good thanks to the bullet-like shape of the earphones, so that even those with smaller ears will probably find them comfortable. I find the BIE Pro to be better when the cable is dangling, as the way it comes out of the shells makes wearing it over the ears less comfortable (though still perfectly fine in more general terms). 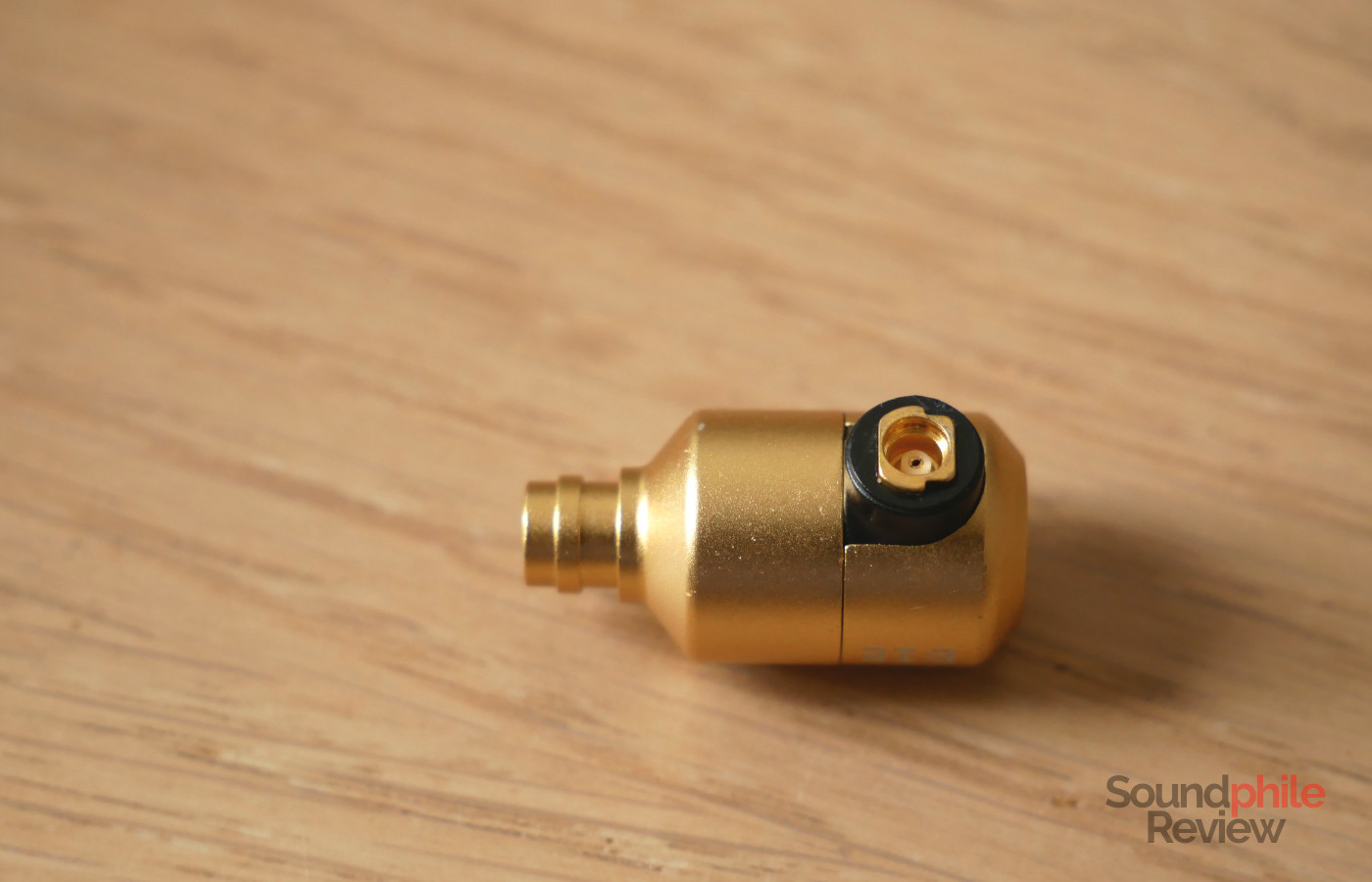 One thing I immediately noticed with the BIE Pro is that there is a massive driver flex when inserting the earphones into my ears. There’s a loud crinkling sound as I push the earpieces in – a signal that the hole on the back of the shells is still limited in what it can do to prevent this. 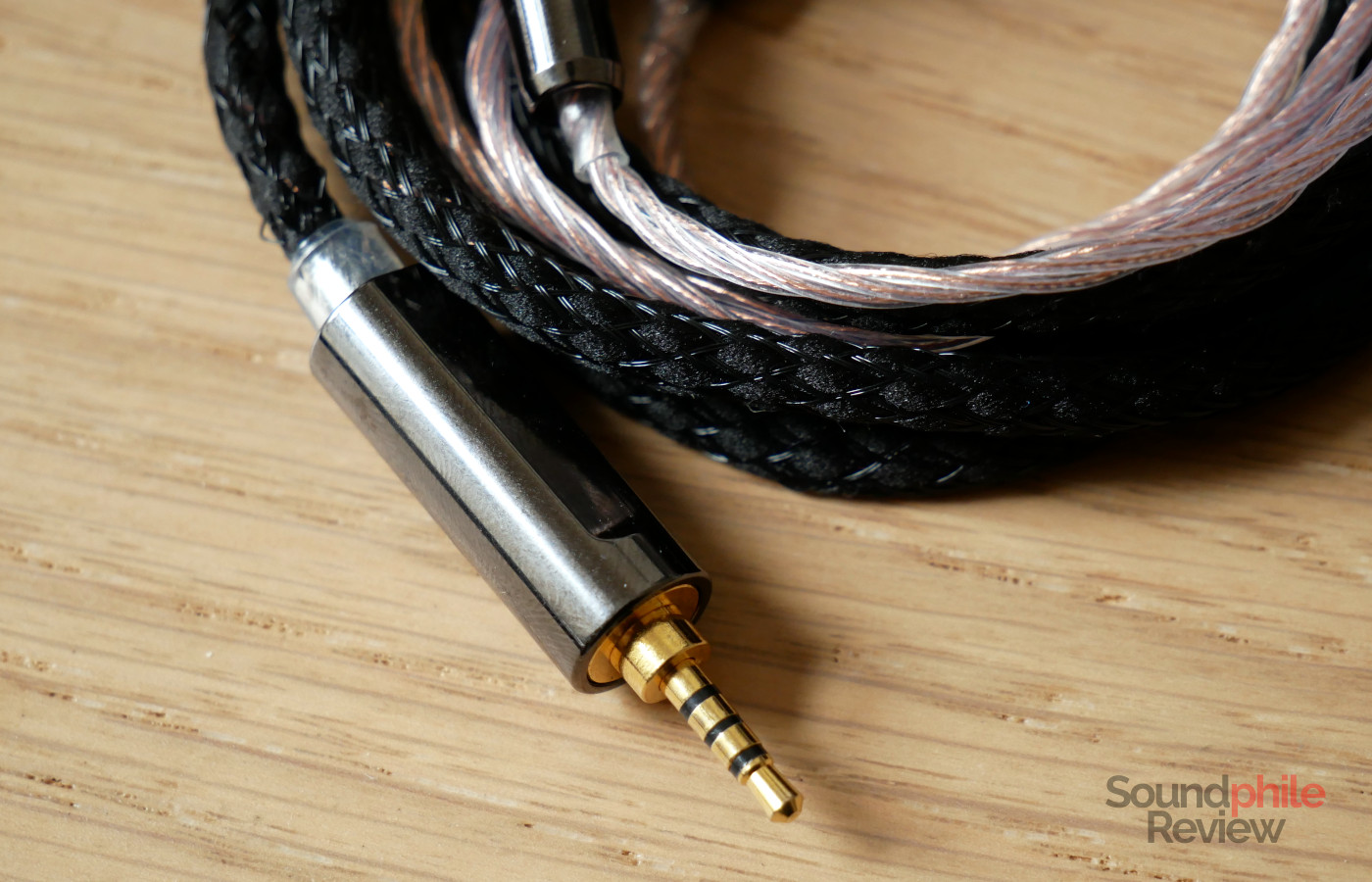 The cable is one of the best-looking I’ve encountered among budget (as well as non-budget) IEMs in my career as a reviewer. It’s really striking as the lower part, between the jack housing and the Y-split, is braided and covered with a black sleeve made of cotton and braided nylon thread; the upper half is made with pure copper cables encased in transparent plastic. It’s reminiscent of the cable found on the ThieAudio Phantom, but it’s different as the fabric sleeve appears to be kept in place by a braid of plastic (nylon?) threads. This makes it look a bit plushy. The other large difference is that the Y-split on the BIE Pro’s cable is made of smple plastic shrink wrap, while the Phantom’s is metal.

I tested the Venture Electronics BIE Pro with a variety of equipment, including an IKKO Zerda ITM03 and a Topping DX7 paired with a Drop THX AAA 789.

Venture Electronics does not disclose the specifications of the BIE Pro, but it seems like they have low impedance and high sensitivity: I can drive them with anything and they require a very low volume level on the source to get to a high listening volume.

The BIE Pro offer a decently wide soundstage that extends well into the distance laterally, but it is almost devoid of depth, leaving you with the sensation that sound is bidimensional. As a consequence, imaging is a bit limited as the front position is basically not there, so everything sounds as if it was coming from the right, from the left or from both – but seldom from the centre itself. Instrument separation is decent, as you can distinguish the various parts even in relatively complex tracks.

Bass is very abundant, stopping right before the threshold of excess, and it’s quite well done: it has amazing depth, especially for the price point of the BIE Pro, and it’s decently fast. It’s not blistering fast, but its speed is still enough to deliver transients that feel incisive and (relatively) sudden. Sub-bass is, quite unexpectedly, the prevalent area and this gives added depth to the sound as a whole. Detail is decent, but in line with expectations from earphones in this price range. What I really like is physicality: the BIE Pro manage to give you that kind of kick that usually only full-size headphones deliver.

Midrange has a bit of an issue in the upper area, together with the lower treble: there’s a moderately large spike that makes the sound of the BIE Pro fatiguing, especially if it is rich in instruments around the 3-5 kHz area. Astropilot’s Between is especially good at showing this: there’s a constant whistle that plays throughout the track and it sound very harsh and fatiguing, even after a few minutes of listening. That’s basically the only real flaw you can find, but it’s a pretty major one. The rest of the range is quite alright: there’s a decent level of detail combined with good speed and physicality – the beginning of Snarky Puppy’s Binky shows the ability of the BIE Pro to portray smaller details with a very good dynamic range.

Apart from the previously mentioned peak, treble is mostly fine as its extension lends some air and openness to the sound as a whole. Apart from the peak in the lower area, the rest is reasonably linear and enjoyably consistent. In terms of detail, the BIE Pro is not quite there and offers just a basic representation of the instruments: to make a practical example, Hells Bells by AC/DC has a lot of cymbals and they are smeared and not really painted with minute details.

Compared to the competition, the BIE Pro emerge as a quite nice offering:

The original BIE were quite cheap, at just $20, and they were amazing for the price. The new Venture Electronics BIE Pro raise the bar by quite a bit, costing three and a half times as much as the previous version. Still, I find this increase to be entirely justified. Whereas the first generation was much darker and less capable, the BIE Pro are perfectly able to compete with other similarly priced offerings currently on the market. The improved cable, better sound signature and great bass depth make the BIE Pro a viable alternative to other competitors, although they have a few flaws in their tuning which have to be carefully considered. They don’t sound wrong, but they surely aren’t going to be everyone’s cup of tea.