That HiFiMAN has a strong relationship with Drop is no secret: they’ve been collaborating for years on products made to Drop’s specifications. The Drop HiFiMAN HE5XX are the latest in the series and they are supposed to bring the listening experience of the HE-500 series to a (much) lower price point. As we’ll see, though, the reality is quite different from that and the HE5XX are not at all like the HE-500 series.

Disclaimer: thank you to Mark at HiFiMAN Europe for lending me this pair. The HE-5XX are available through Drop at $220. 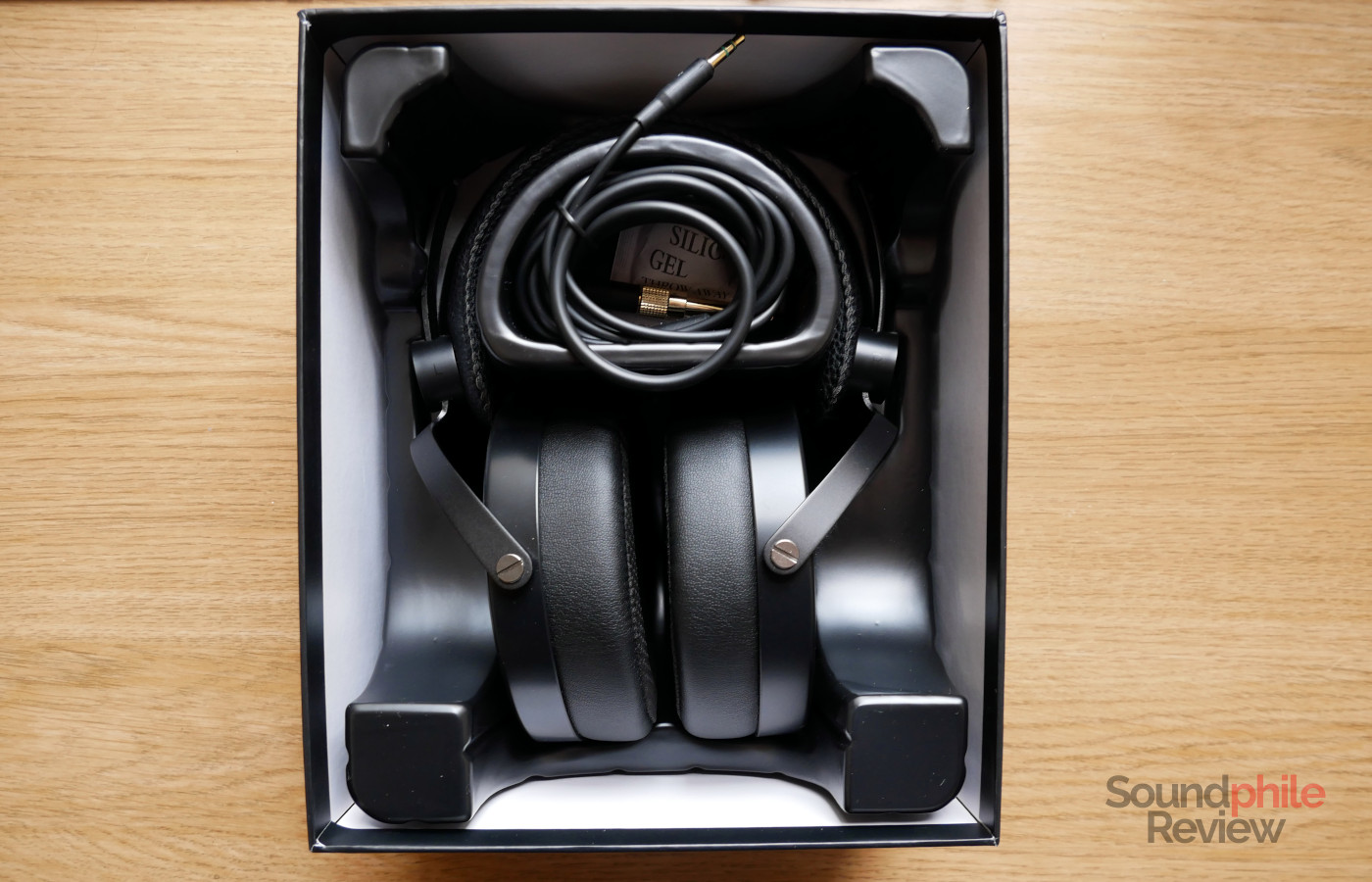 Packaging is even simpler than the standard HiFiMAN has got us used to: inside the cardboard box is a piece of moulded plastic that holds the headphones and their cable, plus a small manual. 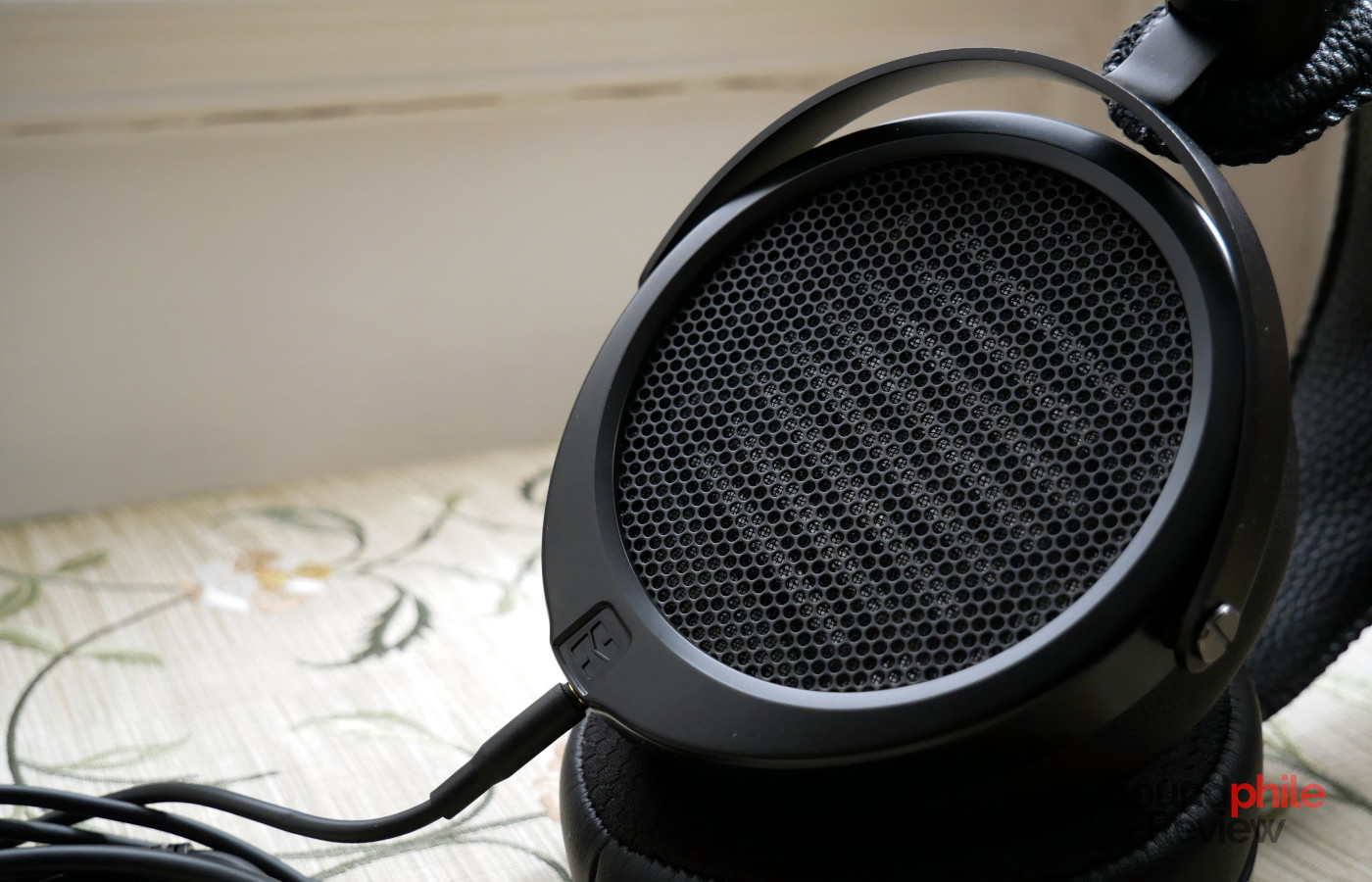 In terms of design, the Drop HiFiMAN HE5XX is a Frankenstein’s monster that combines the earcups of the Deva with the headband of the HE-4XX. The earcups are nice, but the rest looks and feels cheap. The only positive thing I can say about the build is that the gimbals are made of metal, so they should be more resistant than those of the original HE-560; on the other hand, though, they are connected to the actual headband by a small plastic puck that’s glued to it, so this thing is not quite the best when it comes to build quality. 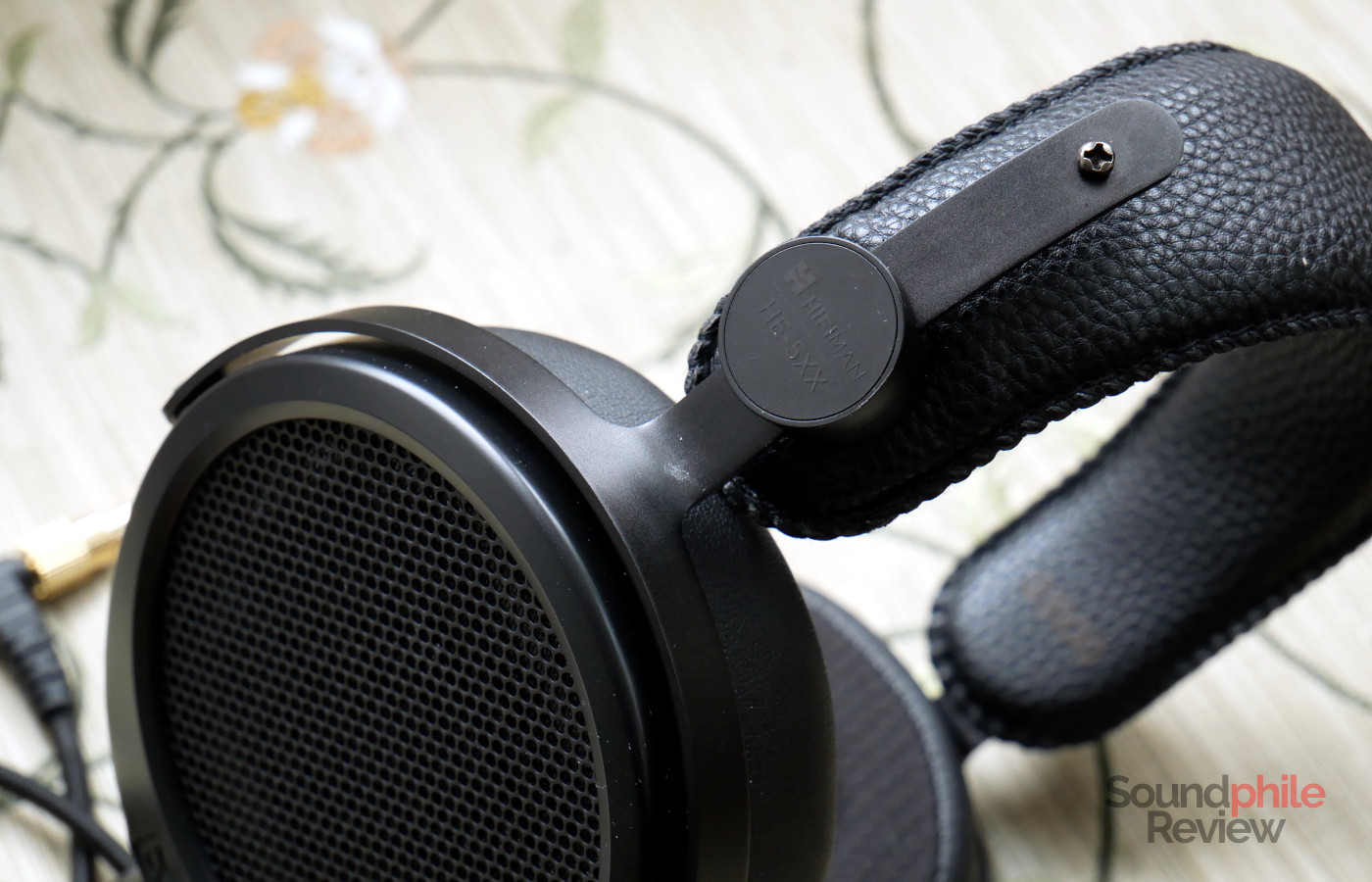 I take issue with the headband especially, as it really does look bad. It’s a simple band, presumably of metal, with very thin padding and a cheap-looking faux leather cover. The HE5XX look and feel like headphones designed and manufactured to cut all possible corners on the actual build side, so build quality doesn’t appear to be great. 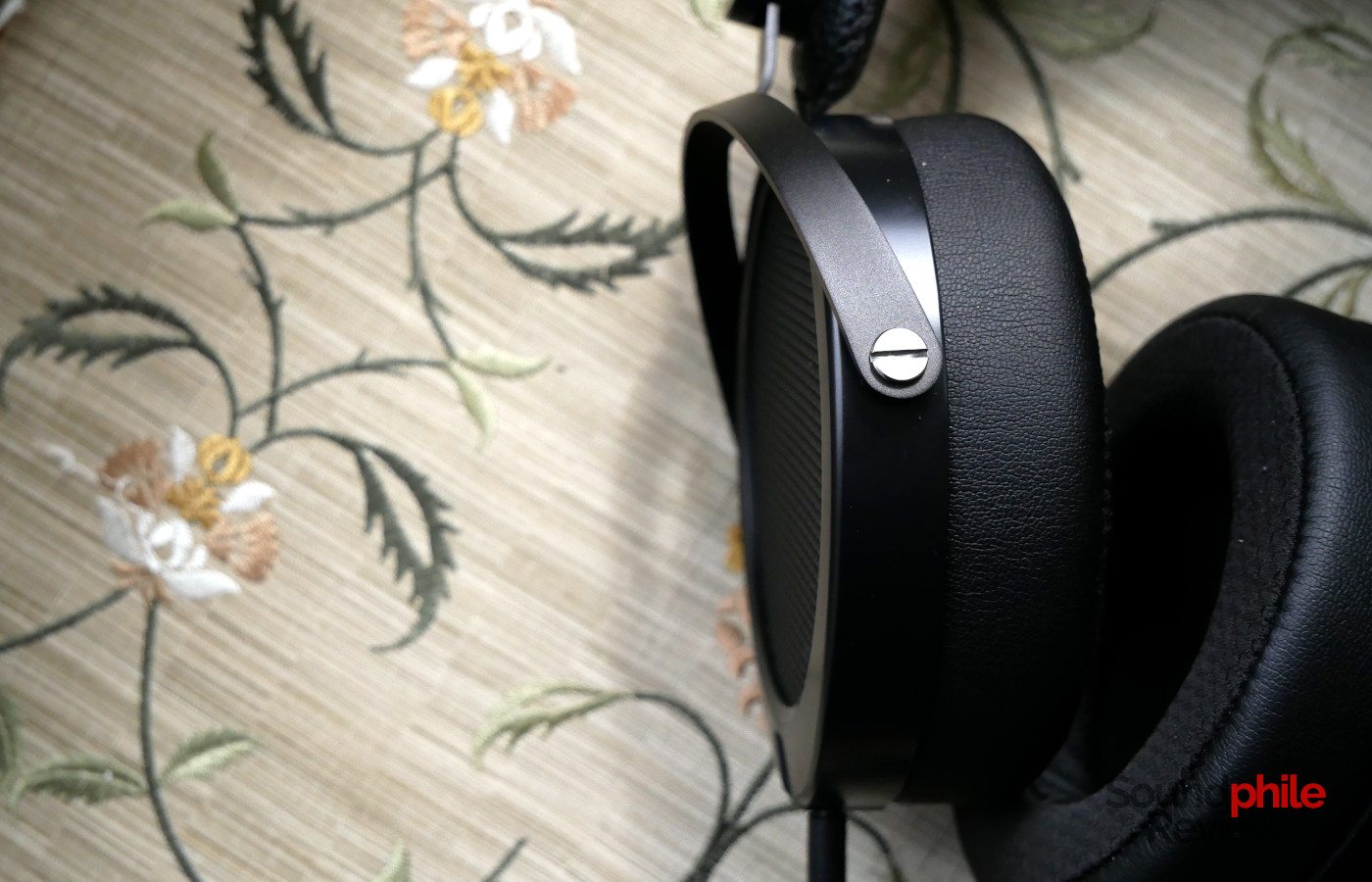 Not only does the headband look bad, it also fits badly compared to many other HiFiMAN headphones. Despite the relatively low weight of the HE5XX (338 g), they are not quite comfortable to me. It’s true that I have special needs in this regard as my scalp is especially sensitive, but I find heavier headphones like the Sennheiser HD 6XX much more comfortable. 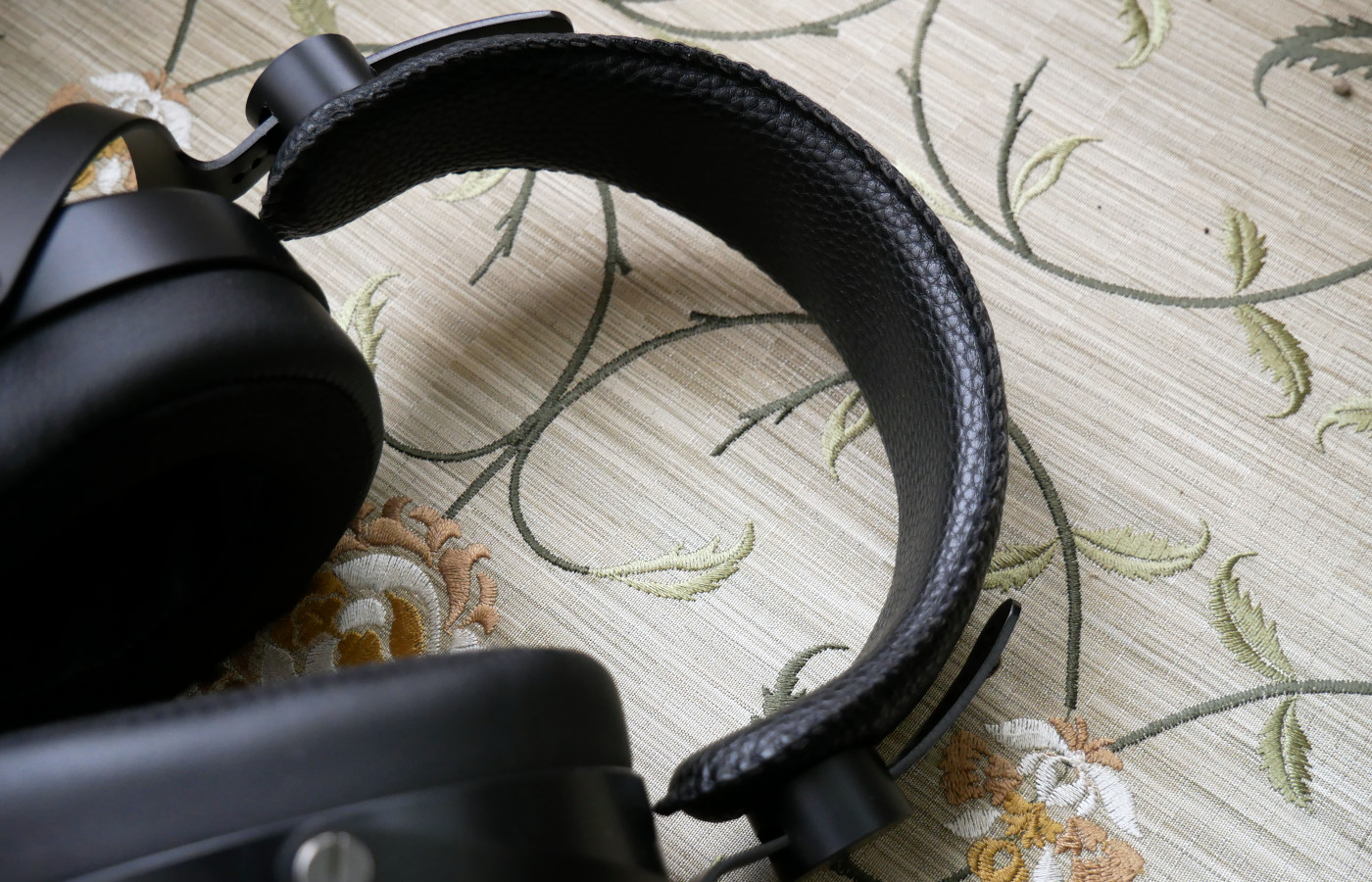 As you can expect from an open-back set of cans, the HE5XX offer no isolation whatsoever and they leak a good bit of sound as well, so your music is audible to those around you. 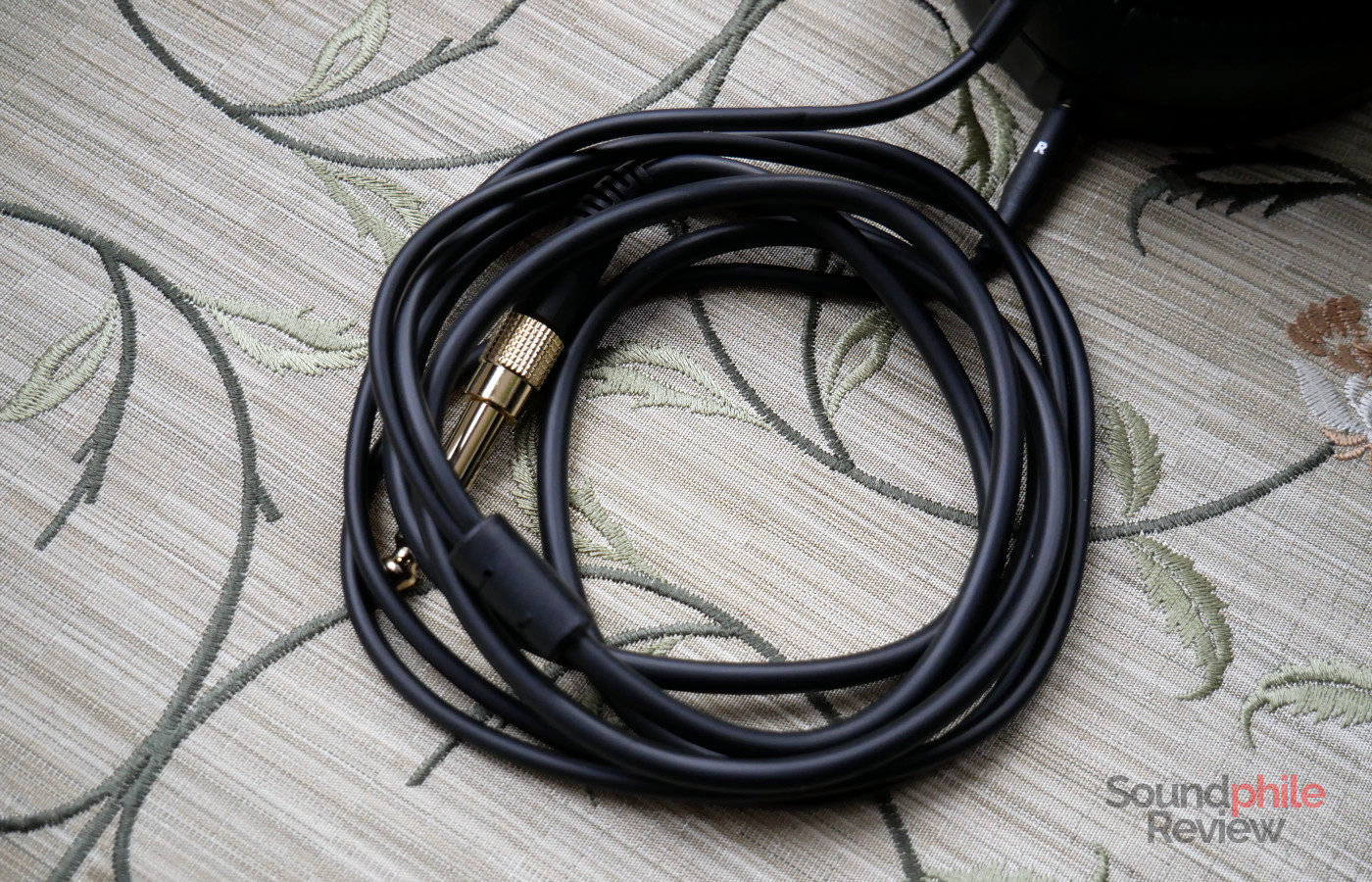 The cable is just bad. We’re used to HiFiMAN shipping terrible cables with their headphones, but this one is just rubbish, with its cheap-looking and cheap-feeling plastic sleeve. Despite being relatively soft it’s also quite prone to coiling, which is not really a good thing in my book. Thankfully you can replace it with any cable you like that has 3.5 mm TRS terminations.

Now, when I mentioned the similarity with the Deva, it looks like that doesn’t stop with the shape of the earcups. This interesting video by Resolve gives you a lot of food for thought and concludes that the Drop HiFiMAN HE5XX appear to be just a reskinned (and worse-built, in my opinion) HiFiMAN Deva. That means that everything I have said about the Deva should stay true for these headphones, too; my experience with the HE5XX is a bit different, though, and I find them to be a bit harsher than my recollection of how the Deva sounded. Unfortunately I don’t have a Deva with me any more, so that might be due to some entirely subjective factors (e.g. I’m tired and high-pitched sounds are more fatiguing to my ears) rather than because of real differences in how they sound.

I find soundstage to be more than decently wide, with a good space extending in both lateral directions, while depth is more limited. Imaging is definitely good and gives instruments great placing on the stage. As for instrument separation, the HE5XX are quite good in general, but tend to fare poorly in crowded tracks as they get a bit muddy there.

There is more bass than in an ideal neutral target, especially in the lower mid-bass area. Depth is fine, even though the lowest notes are clearly recessed and hard to hear. As you’d expect from planar headphones, the HE5XX have decently fast transients, with decay being long enough not to let them sound too dry, with detail being quite good as well and emerging clearly enough even in crowded tracks (although there are limits to that, as explained before). All in all it’s a very pleasing bass section, though it’s not stereotypically planar with ruler flat response down to 20 Hz.

There is quite a bit of emphasis on upper midrange, which sounds quite bright and almost tinny (without actually getting there). This added emphasis makes it so that the middle and lower regions sound almost recessed in comparison. Despite this, I don’t find this emphasis to be overdone as it never get fatiguing nor harsh, despite making instruments such as electric guitars and violins really a central part of the mix. In the Deva review I mentioned that Vessels from the Koyaanisqatsi soundtrack was lacking clarity and I can attest that that’s true for the HE5XX as well – I remember clearly that the passage between the minutes 2:00 and 3:30 (roughly) had voices that lack focus and clarity and that applies to the HE5XX as well. Detail is, as with bass, quite good, even though it suffers when the track is complex.

Treble surely is the most noticeable part of the sound signature, being quite forward in the mix. The peak of this emphasis happens in the lower region, at the border with midrange, and then goes on with a few other smaller peaks here and there – nothing major, luckily. Although it sometimes does make the sound a bit intense, this additional energy makes it also open and airy. I never found it to be harsh, despite it being sometimes a bit too much for my taste. Detail has the same features as the other two areas.

Here’s a comparison with other headphones:

So the question is, how good are the Drop HiFiMAN HE5XX? The answer is that, from the perspective of sound quality, they hold their own against the competition. They’ve got very nice technical ability as well as a bright signature that certainly is different. The thing that needs to be said is that these are nothing like the HE-500 series. They don’t hold a candle to the HE-560 and they’re also very different in terms of sound signature, with way less bass that’s also far shallower. If you were expecting to get a reworked, maybe even better HE500, then you’re in for a sore disappointment.

Even compared to the Deva, which they appear to share the driver with, the HE5XX fall short in terms of build quality and considering they are the same price, that’s not quite the greatest thing. I have mixed feelings about the Drop HiFiMAN HE5XX, as they do sound good but they have quite a few issues and, compared to their direct competitors (e.g. the HD 6XX) they just fall short of them in almost every single way, especially when it comes to build quality. While they’re not bad at all, the HE5XX are not enough in today’s landscape. With better materials and a different design they could have been a good alternative to other names in this crowded space, but with things being as they are there are just better alternatives out there.