A child of the Edition X, the HiFiMAN Arya has been considered by many one of the finest headphones made by the brand since its launch. This high-end headphone is often taken as the reference because of its almost neutral signature and is in many ways the baseline against which most other HiFiMAN headphones are judged. Keeping this in mind, it’s hard to approach the Arya nowadays as a reviewer and say something that hasn’t been said yet, or give you an original perspective – but we’ll try anyway!

The unit I am going to review is the second revision: you can tell this by looking at the drivers, as they are covered by a black cloth, contrary to the first generation which had exposed drivers.

Disclaimer: I received this unit free of charge from Mark at HiFiMAN. The Arya retail for $1,600. Additional info is available on the official product page. 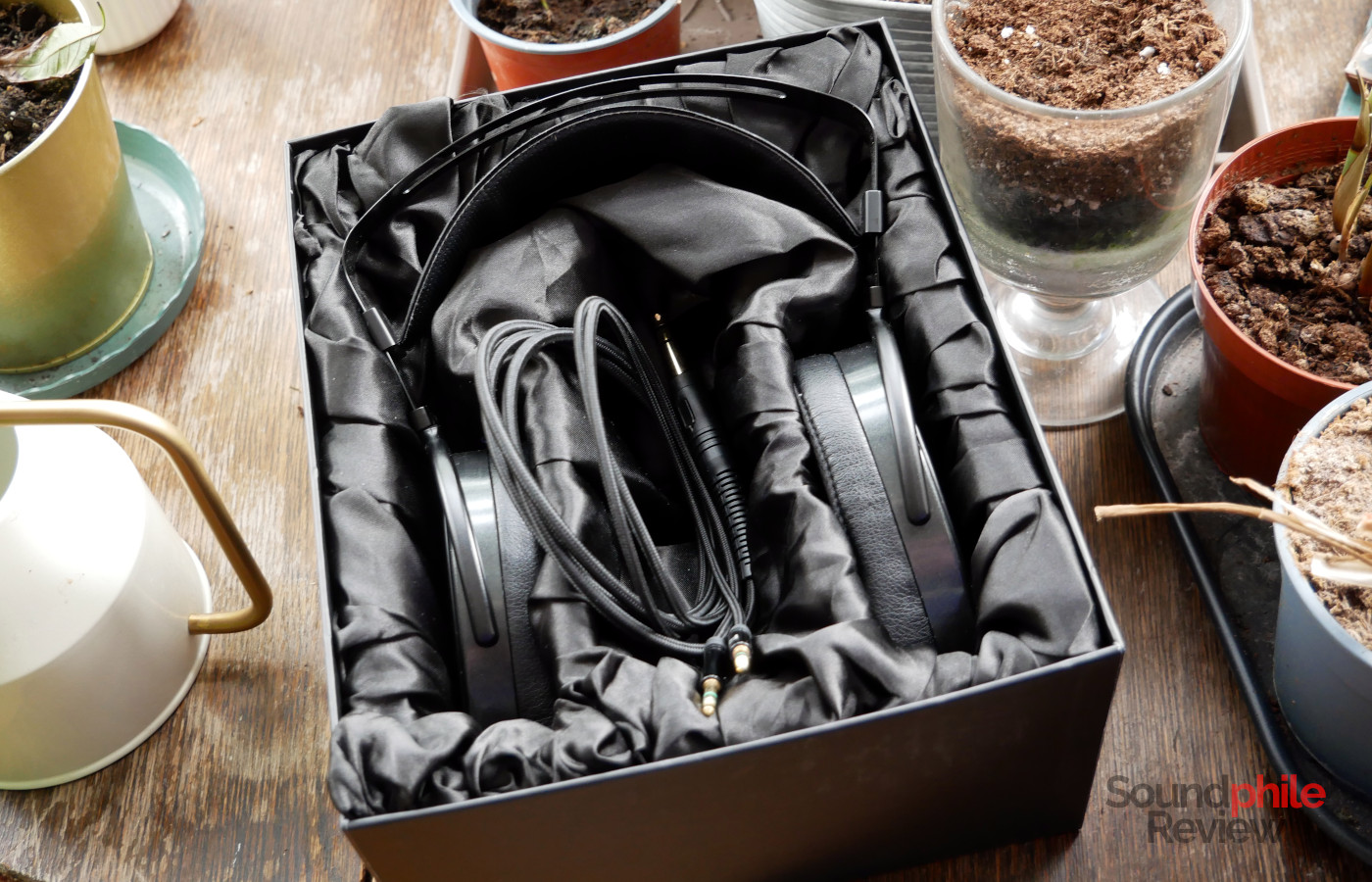 The packaging is the usual of most HiFiMAN headphones: a cardboard box with foam padding and satin. It’s quite simple and far more spartan than most other headphones at this price point, but it does its job well enough. Inside it are the headphones and the cable, nothing more. 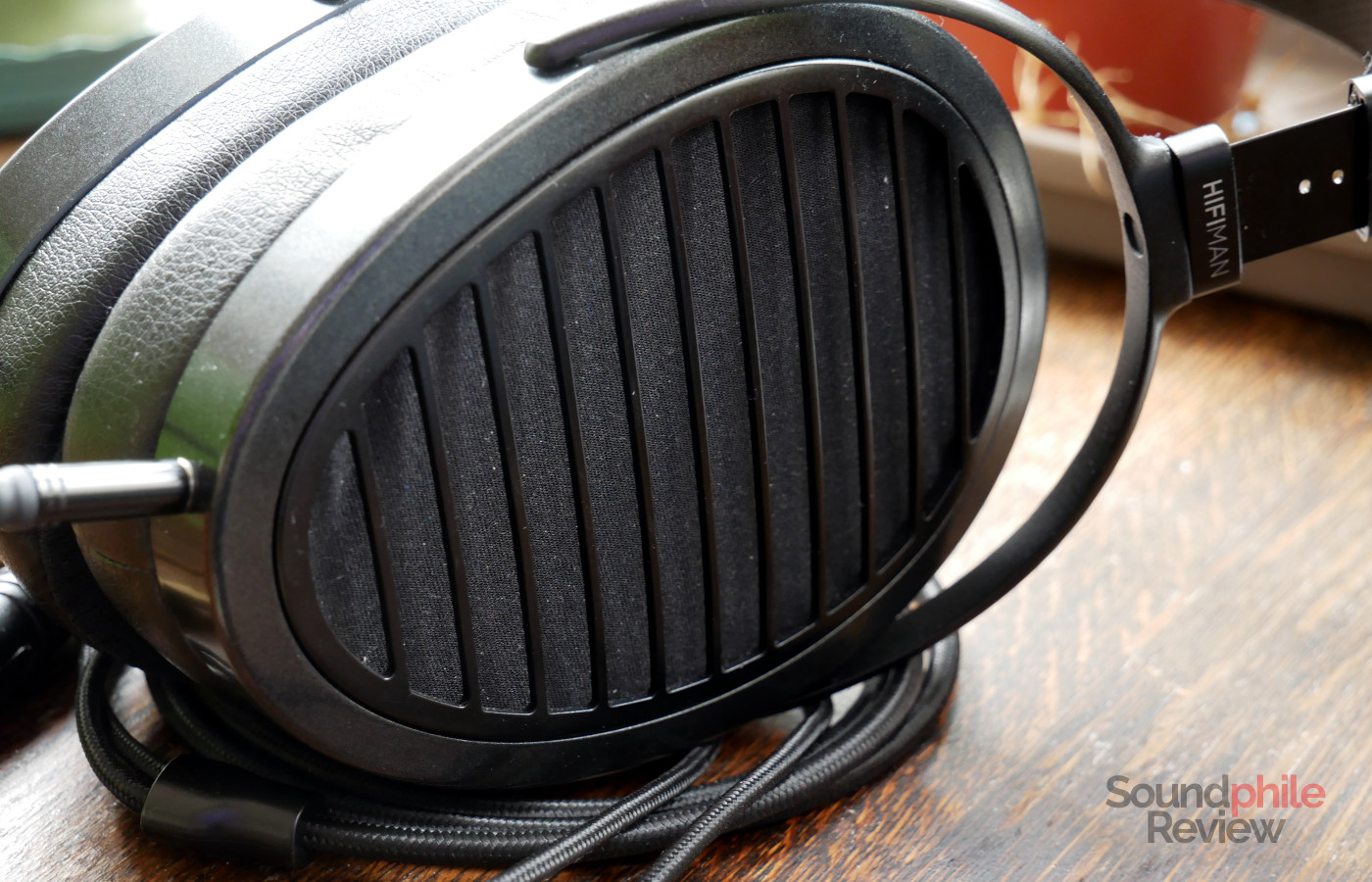 HiFiMAN’s top-of-the-line headphones are all quite similar in terms of design, once we exclude the Susvara: they’re all drop-shaped and quite large, so that they can house larger diaphragms. The Arya make no exception to this and feature large earcups with a suspended headband design.

The Arya are similar in style to the Ananda when it comes to the drop-shaped earcups, but they’re quite different in the rest of the build. The headband is the same as that on headphones like the first-generation HE-560, while the gimbals are similar to those while being longer to accommodate the larger earcups. In terms of materials, the Arya are made of plastic and metal: the gimbals and headband are metal, while the earcups are plastic with a semi-glossy finish. 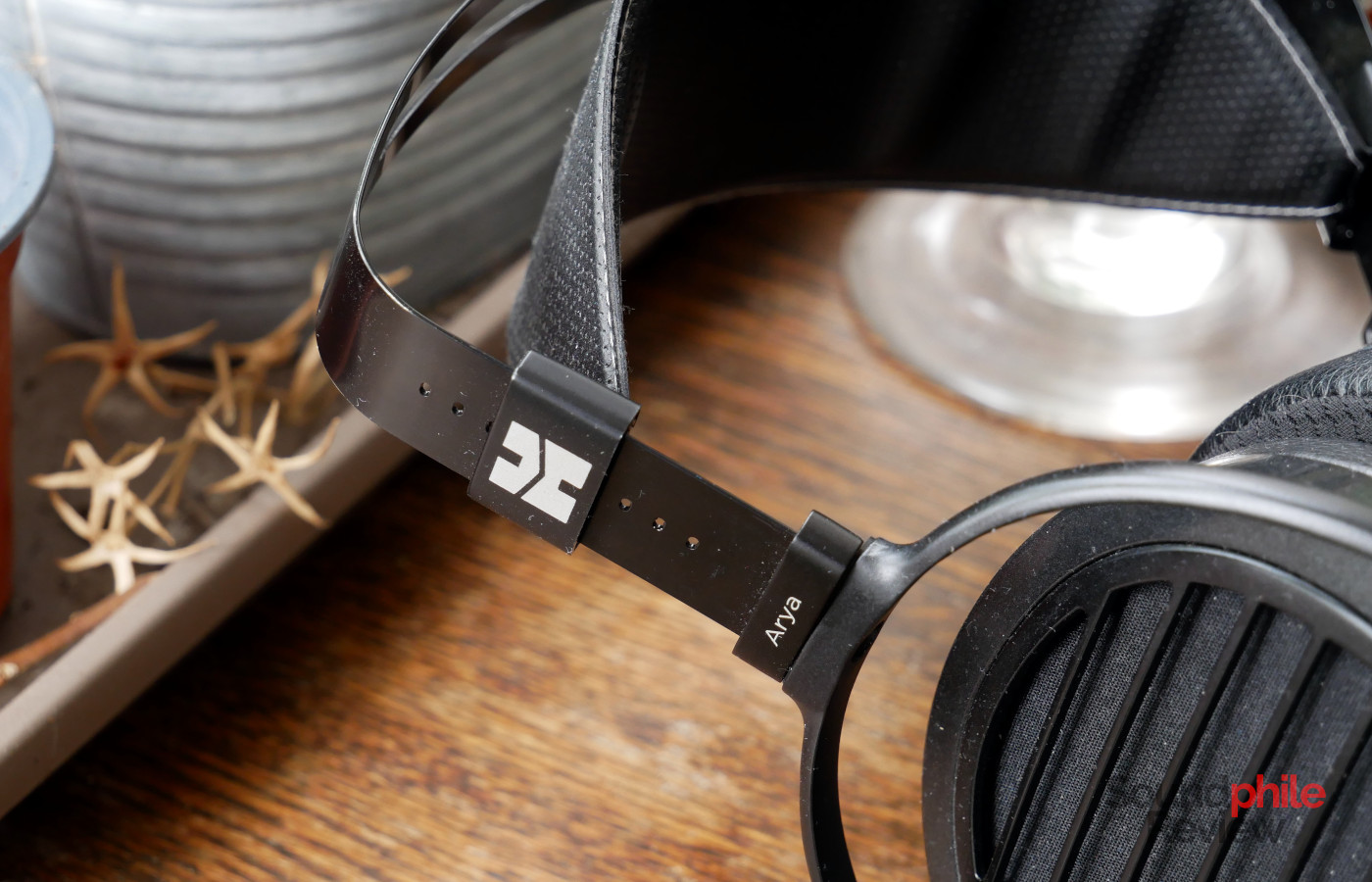 One key aspect is that the Arya have swivelling cups both on the horizontal as well as the vertical axis. That means that the headphones adjust to your head’s shape much better than those headphones that lack that mechanism (e.g. the Ananda), providing better comfort. 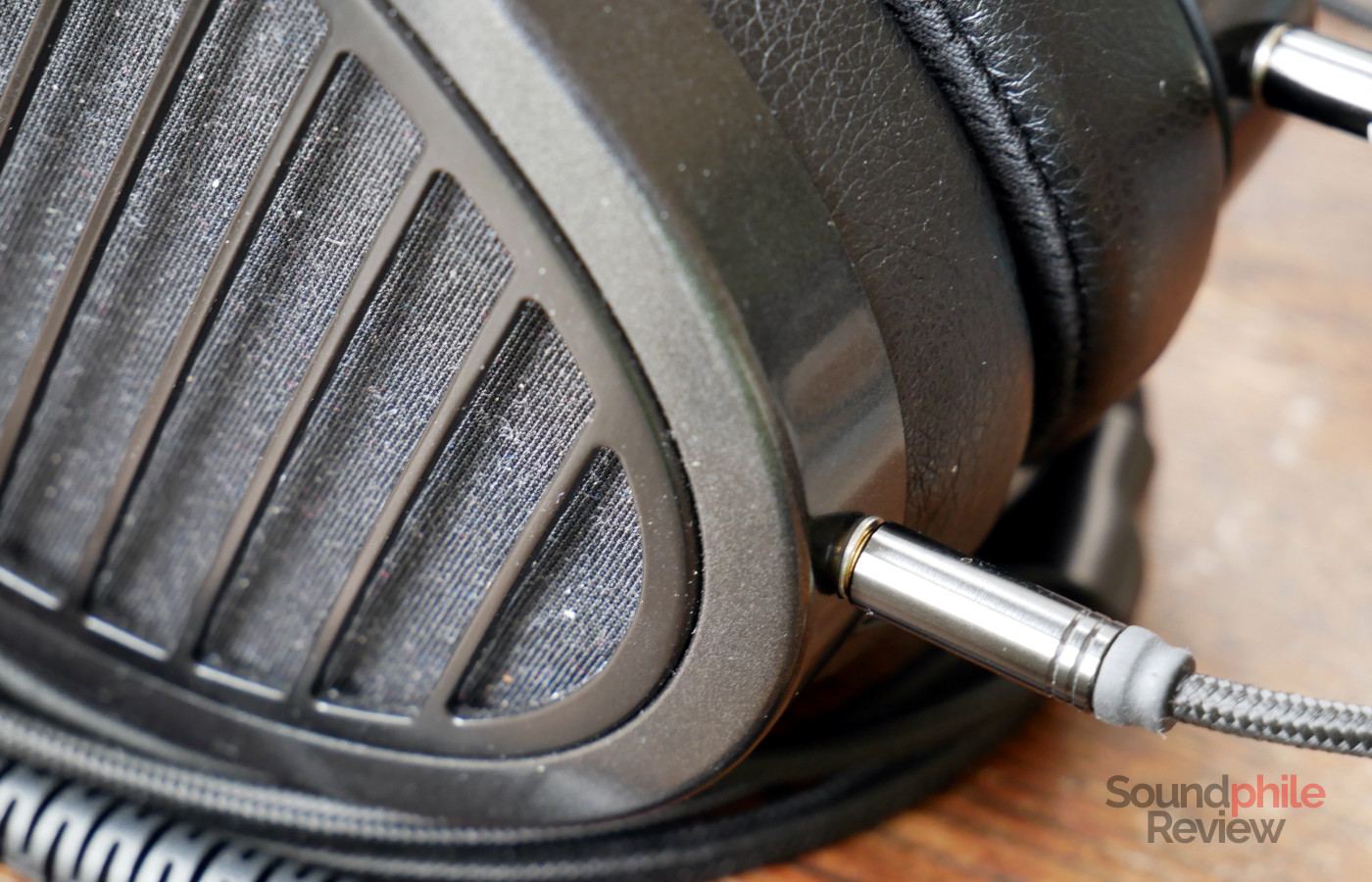 Build is quite good overall, even though the plastic feels a bit cheap (possibly because it’s shiny?). Assembly is quite well made and the major pain points of other HiFiMAN headphones, like the gimbals or the headband breaking, shouldn’t be an issue here given these critical components, the most exposed to strain, are made of metal. 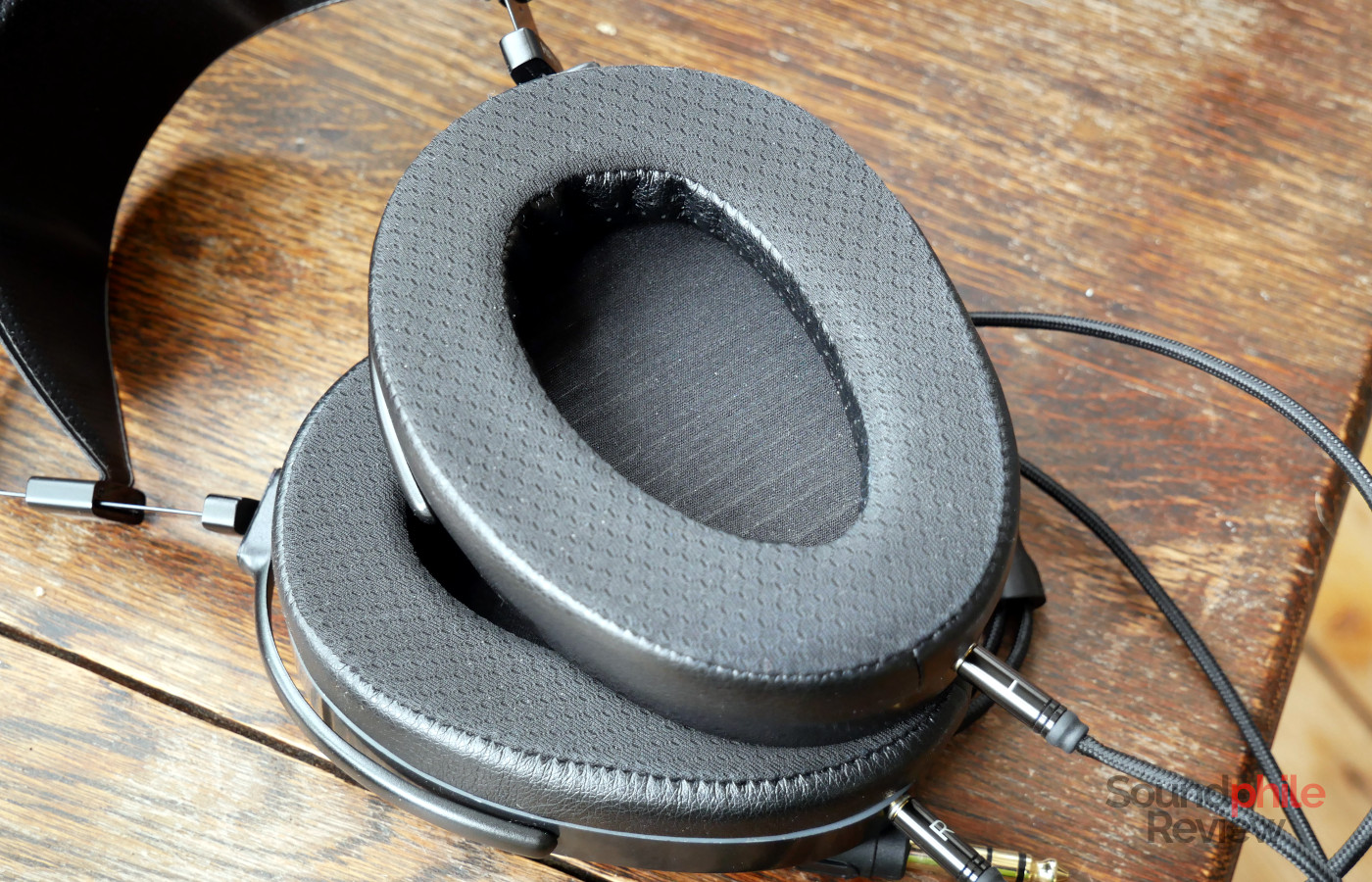 Thanks to the abundant padding of the angled earpads and to the wide headband, the Arya are extremely comfortable. Despite my very sensitive scalp, I can wear them for a few hours without discomfort or fatigue. This means that people with a normal scalp can probably wear them forever, or something close to that. They’re almost as comfortable as the HE-560, which I still find the most comfortable headphones on the market – the main difference between them and the Arya being that the HE-560 apply larger pressure on the sides of the head, while the Arya are much more relaxed from that perspective.

Isolation is nihil, so much so that you can still clearly hear you cat purring with music playing (true story!). That also applies in reverse and people can hear your music, so the Arya are definitely not headphones to use in offices, libraries and other shared spaces. 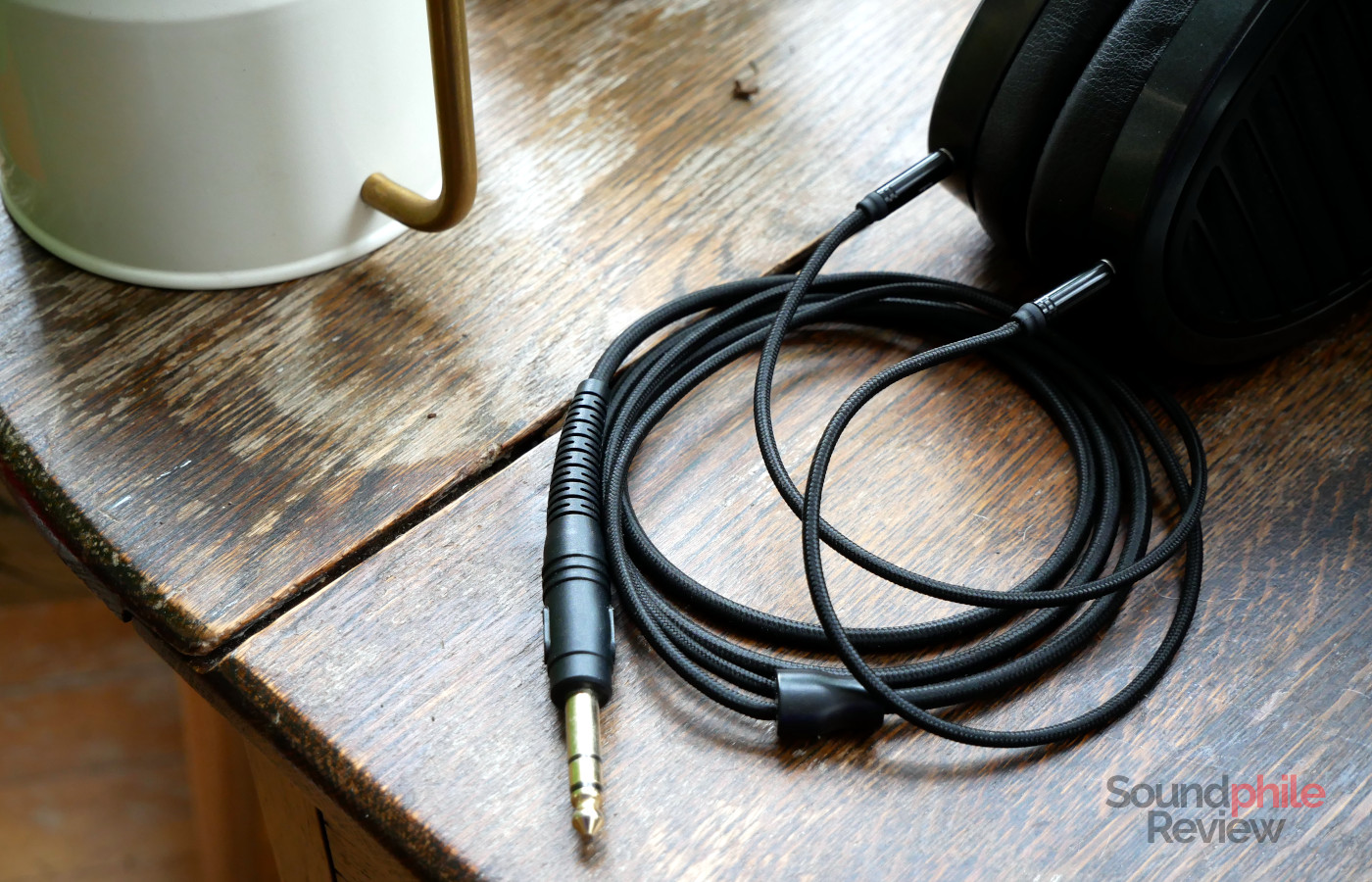 The cable is marginally better than the one provided with the Ananda, as it is basically the same but it’s sheathed in a braided fabric sleeve. Just like the Ananda, the Arya feature two 3.5 mm jack sockets. On the other end of the cable is a 6.3 mm jack. The cable is better than those with that catheter-like looks, but it still has its drawbacks as it is stiff and prone to coiling.

I tested the HiFiMAN Arya using a HiFiMAN R2R2000 as well as a Topping DX7 feeding a Drop THX AAA 789. Both were fed FLAC files, mostly from ripping CDs.

The HiFiMAN Arya use the company’s “nanometre thick diaphragm” which is especially thin, as well as asymmetrical magnets (smaller on the inside) and an especially designed external grille; all these factors contribute to reducing refractions of the sound and improving its quality. The Arya are relatively difficult to drive, with their sensitivity of just 90 Ω that makes it necessary to have a decently powerful amplifier: these headphones need 286 mW to get to 100 dB (which is loud enough to cause permanent damage in little time!), while getting to 110 dB requires an astounding 2,858 mW!

Soundstage on the Arya is wide and deep, but not exactly expansive in either direction: the sensation is that of being in a relatively wide room, with the instruments close up and the sound expanding in the space around. Imaging is superb, as each instrument has its own precise spot and is placed accurately in the left-right spectrum, allowing you to form a 3D image of the scene. Instrument separation is excellent and allows you to hear minute details of background instruments just as well as of instruments in the foreground.

Just like it’s expected from planar headphones, bass is almost linear down to the 20 Hz mark, giving you a strong yet faithful low end. Sub-bass is straight in line with the rest, offering the listener a dive into the lowest frequencies that’s clear, clean and with a presence and depth that really make you feel immersed into the music. Bass on the Arya is characterised by high speed, which translates to fast and accurate transients as well as a lot of details and micro-details. What I really like about the Arya is that they give bass a real texture, made of details and physical sensations: although bass isn’t extremely physical, it is enough so that you can feel it, as you can hear in tracks like Massive Attack’s Flat of the Blade.

Midrange is not quite as neutral, with a ramp in the upper region that reaches its peak in the 5 kHz region. As an example, in Pink Floyd’s Breathe, from The Dark Side of the Moon, I can clearly hear how there’s a bit of sibilance that makes the voices more breathy and sibilant than ideal, both male and female, although the general tonality appears to be intact. This is a characteristic of the Arya’s sound that many people are probably going not to like as it is, in fact, a flaw. Still, the Arya’s mids are rendered with incredible competence: they burst with details, which always emerge clearly no matter how crowded the track. If we take out the peak in the upper area, the mids are reasonably flat and therefore sound great with most tracks.

Treble is quite extended and this gives it a distinct sense of air and openness – it sounds light, almost delicate, and it counterbalances the otherwise massive bass presence well. Although it is a bit prominent in the lower region, it’s never fatiguing, or harsh, or excessive, though it does contribute to the hissing and sibilance of the mids. It offer a lot of small details that pop out clearly and are effortlessly heard. Just like in the other two sections, speed is very good here as well. Treble is not so much sparkly as it is shimmering: it is quietly giving you a good balance of energy and liveliness on one side and of politeness on the other.

Here’s a brief comparison of the HiFiMAN Arya with other headphones I have available:

The HiFiMAN Arya are, in many ways, the embodiment of HiFiMAN’s approach to building headphones, from both an acoustic and a design perspective. Their unusual design is conceived to maximize the sound quality and the comfort, while their sound signature is slightly bright while still offering a bass presence that’s flawless. In many ways, the Arya represent the archetype of HiFiMAN headphones: they’re either a better version of products in lower tiers or a tuned-down version of stuff that’s above them, though in the latter case the differences are mostly minimal (unless we’re talking about the Susvara or the Shangri-La…).

As the archetype of HiFiMAN headphones, they’re far from perfect and in fact could be improved by reducing the peak around 5 kHz and by further levelling out the midrange. Even with those flaws, though, the Arya come out as spectacular headphones with an addictive sound that’s lively, vivid and absolutely engrossing. Couple this with the complete comfort they grant and you’ll find yourself completely addicted to them.