If there’s one thing I really like about Shanling is that they are damn consistent. All of their earphones sound pretty much the same, but I say this in the most positive way possible. They went for a tuning and they stuck to it. You have to admire their dedication. That’s true for their wired earphones, from the ME500 to the ME80, but it’s also very true for their wireless earphones. The Shanling MTW300 are probably among my favourite “true wireless” earphones at the moment because they target a neutral(ish) signature while also delivering all of the important features in a very nice package. Shanling really got these ones right. Read on to find out why!

Disclaimer: I received this unit gratis from Shanling, on whose site you can find more info. The MTW300 retail for $119.

In terms of packaging and accessories there’s admittedly not much to say: the package is quite simple, being it a cardboard box with magnets to keep it closed, and it holds the earphones in their case, a USB-A to USB-C cable and a wide variety of eartips – 7 pairs of different sizes, actually, so there’s quite a bit of choice here. The eartips are made of grey silicone that’s quite soft, so it adapts well to the shape of your ears. 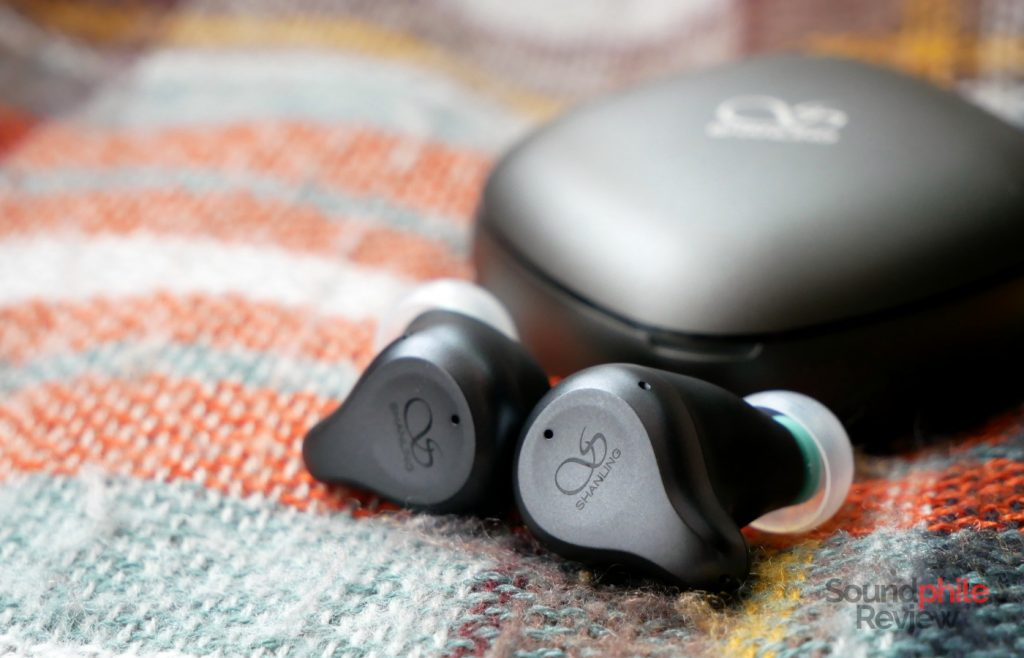 Shanling decided to go with the same design that they used for the MTW100. This is actually an OEM design: Shanling basically bought the thing off the shelf and then customised it. I don’t mean to be demeaning by saying this; there’s nothing wrong with using a good design that’s proven to work and that’s actually the case here, as this design basically does everything right. The earphones are made of plastic: the faceplate has a coat of metallic paint with the same colour as the case applied to it (it’s done so well I initially thought it was metal!), while the rest is painted black. 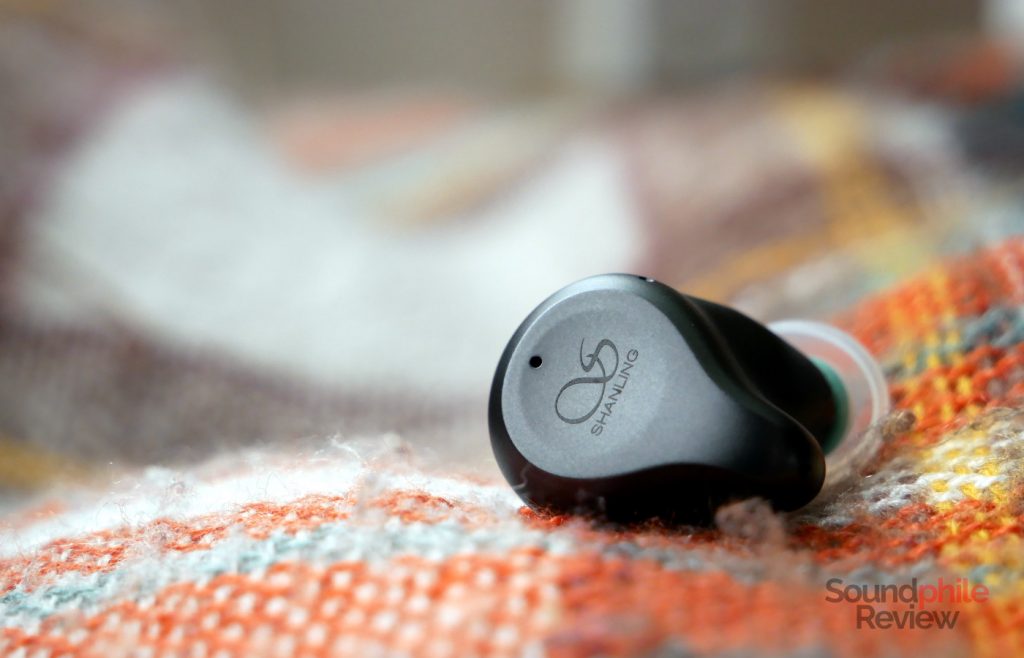 The shape is almost triangular, with very rounded shapes that help the MTW300 fit in your ears without causing discomfort. The small shape also helps with this, and it helps making the earphones basically disappear in your ears instead of sticking out – they’re difficult to spot, basically, so people around you won’t notice you are wearing them unless they pay close attention.

The impression the earphones give is that of a high-quality product that is designed and built well, as it is in Shanling’s tradition. The plastic looks and feels quite good and leaves little doubt in regard to the durability of the earphones. 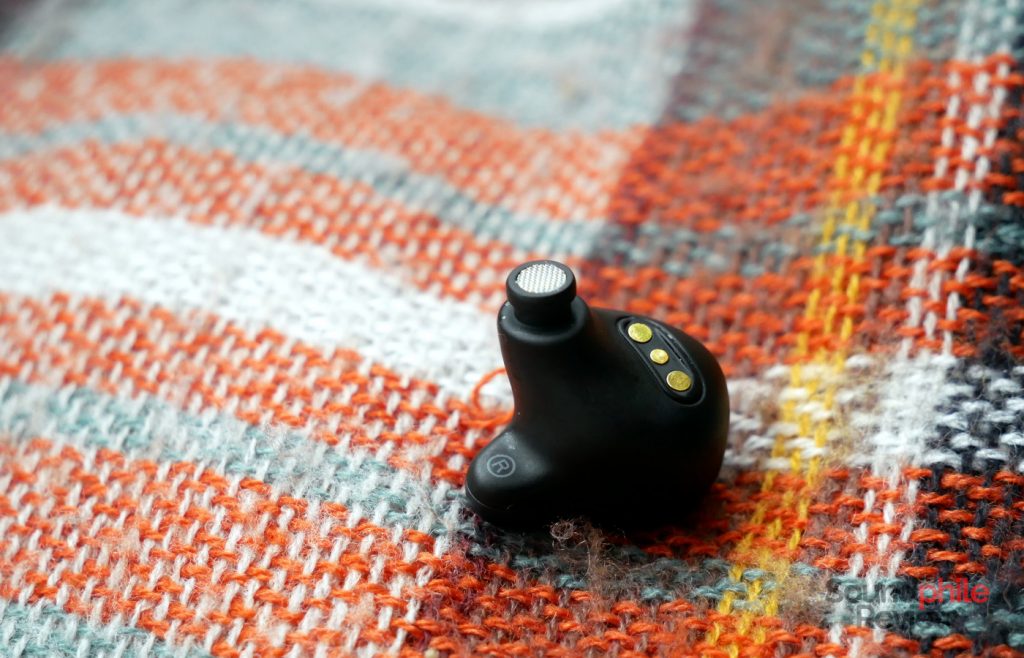 The earphones are rated IPX7, which is a notch above what most earphones offer these days: you can take them practically anywhere, save for when you go swimming. I used them during showers a few times and they never complained – most impressively, the touch commands still worked perfectly well even under the running water!

Although I admit I haven’t been able to test them in very noisy environments (hey, it’s still lockdown time after all), the Shanling MTW300 offer only limited isolation that makes even the clickety-clackety of my silent mechanical keyboard quite audible.

Comfort is, as you probably already understood, quite great. I can wear the MTW300 for hours without even feeling them. That’s especially true when I use the SpinFit tips, though even the stock tips do quite a good job. 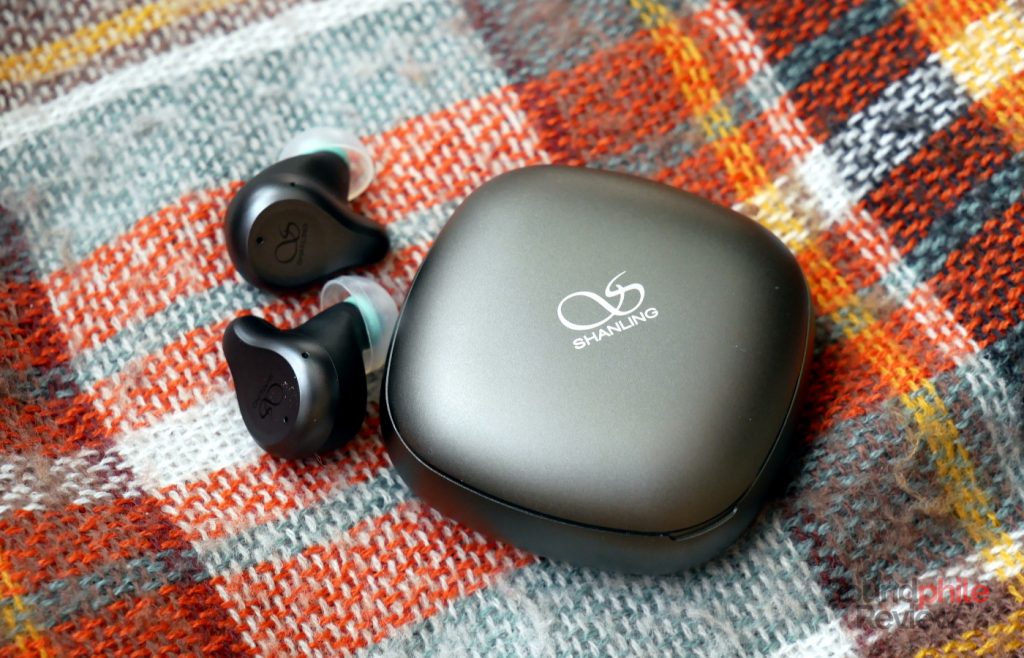 The dock-case is compact and beautifully crafted, with its metal build and curved lines. It’s quite small, but still substantial in its weight (91 g without the earphones, 100 g with). There’s a three-LED indicator inside that helps you gauge the remaining charge. The small size and the design allow you to open (and close) the case with just one hand and to make the lid stay open, a feature that’s unfortunately not always present on TWS earphones. 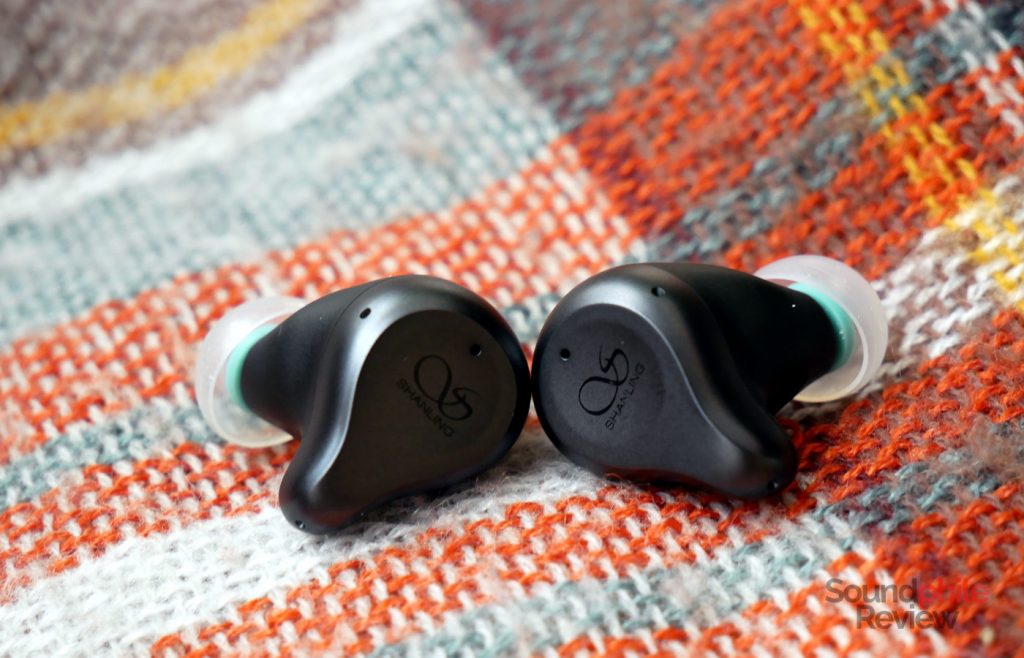 The Shanling MTW300 feature the latest Bluetooth 5.2 standard with the SBC, AAC and aptX codecs. The range is quite good and so is the stability of the signal: my usual test of walking from my study to the kitchen shows that the connection holds up pretty well and doesn’t falter but in the farthest corner of the kitchen. As  the MTW300 use the Qualcomm QCC3040 chipset, it is possible to use them in mono mode and then switch to stereo mode seamlessly just by taking the second earphones out of the case.

Shanling claims 10 hours of continuous playback and while I haven’t been able to test this claim to its entirety, I can attest that the earphones work for at least eight hours with a good amount of charge left. That’s quite amazing honestly, considering that the shells are light and relatively small! While not record-setting, this is performance that puts the Shanling MTW300 among the best-performing true wireless earphones. The case offers around three additional charges, but it must be noted that its battery drains even when the earphones are not being used. I left it untouched for a couple of days after two charges and the next time I picked it up it had no charge left, and neither did the earphones. So if you don’t use your earphones for a few days, it is best to take a look at the charge level before using them.

I used both my Shanling M2X and my HP EliteBook 745 G5 laptop computer as sources. Both of them had the same files, mostly FLACs ripped from CDs (and therefore in 16 bit, 44.1 kHz resolution).

Much like most of the Shanling line-up of earphones, the MTW300 targets an almost-neutral signature with a bit of added emphasis on the upper midrange. Shanling uses a single dynamic driver with 6 mm diameter and a carbon nanotube coating, which bring better rigidity and therefore theoretical acoustic benefits.

Soundstage is that of the typical closed-back IEM: not very wide and with very limited depth, resulting in the sensation of sound being in your ears and extending laterally from there. Imaging is limited in its ability to place instruments on the stage with precision and with a well-defined place; it’s more of a mix where instruments appear to be in an undefined central position unless they lay in one of the extremes on the left or on the right. Instrument separation, on the other hand, is quite good and allows you to distinguish between the various parts with enough ease.

Bass is mostly neutral and it’s concentrated in the mid-bass region, as sub-bass is not quite there. Although there is some sub-bass, its volume is quite lower than the rest, so it doesn’t come out with the necessary energy and impact and leaves the stage to mid-bass. Overall it’s still quite a pleasing tuning, as it gives bass enough presence and strength to deliver a solid foundation for the rest of the sound. The one thing that the MTW300 do not do very well is physicality: it is lacking, probably due to the small driver. It does deliver in detail, though, with a good amount of it being shown even in complicated tracks.

The focus of midrange is shifted towards the upper region tastefully and tactfully, so that instruments such as electric guitars or violins shine but don’t come across as shrill or piercing; even voices do not have much sibilance and are full-bodied and well-rounded. Mids have quite good clarity and this is further enhanced by the their positioning in the overall tuning, as they are in line with bass if not a bit more emphasised. I quite like that detail is there even at lower volume levels and, although micro-detail is out of reach, it is always quite easy to hear smaller details in crowded tracks.

The only area which has a few issues in my opinion is treble. Although it is mostly fine in terms of tuning, save for a couple of peaks that make certain tracks a bit fatiguing (e.g. Moonsorrow’s Tuulen Ajettu Maa), it does have a few issues with detail: it has good resolution and retrieval in the lower area, but the middle and upper areas are progressively less resolving. This may also be due to a few dips happening there which take away some crucial parts. Extension is overall sufficient, though the upmost region sees a steep slope. I quite like that treble is quite coherent with the mids though, and it sits mostly in line with them providing a good sensation of openness and air.

Let’s compare the MTW300 against their competition:

I like Shanling’s consistency in their approach to tuning: they tune their earphones with their target curve and stick to it, improving it generation after generation. In terms of build quality and design, they’re among the best out there as they’re compact, beautiful and highly portable – and quite comfortable as well. In terms of sound, the Shanling MTW300 use the same tuning philosophy of much more expensive models like the ME500 Platinum Edition, retaining most of their perks in a more affordable (and mobile-friendly) package. It’s a very compelling product that can satisfy the audiophiles who want neutral, balanced sound even when they’re on the go.

You don’t really have to give up anything compared to wired earphones with the MTW300, as they also offer high-quality codecs. They’re very solid earphones with a whole lot to love and that’s why they’re going to be awarded with their introduction to Soundphile Review’s “best of” page!