The HiFiMAN Ananda have been quite a successful model for HiFiMAN, thanks to their high performance, good design and great comfort coupled with a price that’s high but not quite out of this world. They’re lovely headphones that take the interesting bits from the higher-end models such as the Arya or the Edition X and make them more affordable. They’re constantly talked about as a benchmark for their price range – so let’s see how they perform!

Disclaimer: I got this unit on loan from HiFiMAN. The Ananda retail for $999. Additional info is available on the official product page.

The Ananda has the usual packaging of high-end HiFiMAN headphones: a cardboard box with faux leather and a metal plaque on top, with satin-like fabric to cover the foam padding inside. The accessory set includes two cables with 3.5 mm jacks on the headphone side and 3.5 mm as well as XLR4 on the other one, plus a 3.5 mm to 6.3 mm adapter. 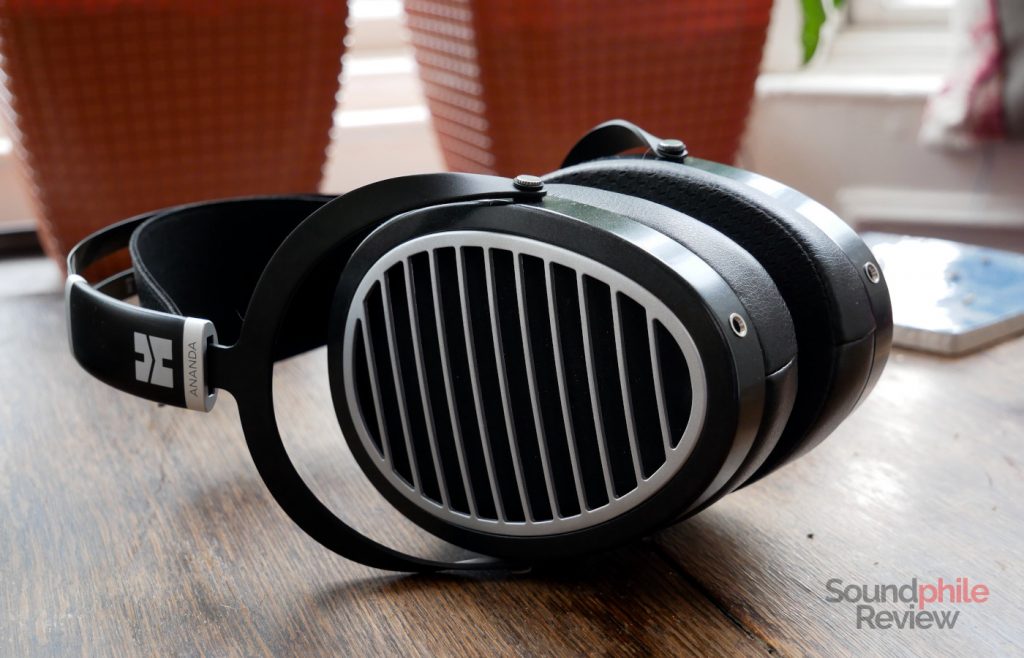 The design of the HiFiMAN Ananda is surely quite innovative, with the earcups having an inverted drop shape that follows that of the pinnae. Nowadays more and more headphones have this same design, with high-profile names such as the Arya and the HE1000 from HiFiMAN or the Meze Empyrean using variations on that, but it’s still quite rare. It’s quite weird, too, so much so that some people may consider it bulky and not fashionable – though one may argue those people are not in target for these headphones. The headphones are entirely painted black with some accents painted silver, such as the grilles on the earcups. Metal is only used for the gimbals and the headband in the Ananda’s build, with the rest being entirely made of plastic. It doesn’t feel cheap, but it doesn’t feel much premium either. 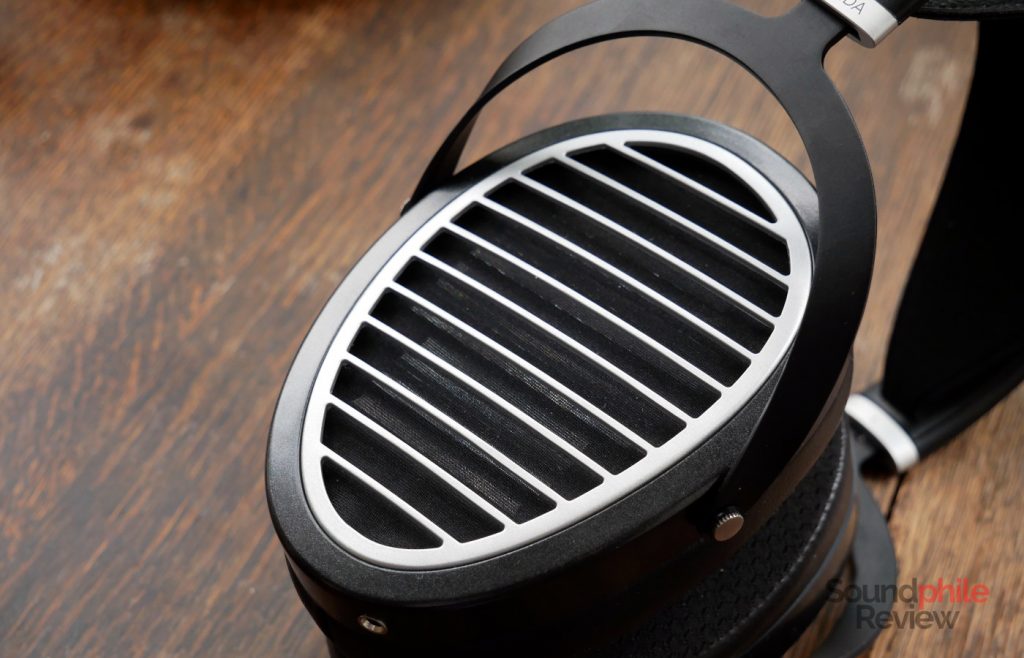 The Ananda are a close second among the most comfortable headphones I’ve tried, with the first being the HE-560. That’s thanks to the hybrid headband: it is a suspended headband with a classic slider mechanism that basically takes the best of both approaches. I can wear the Ananda for multiple hours without feeling any fatigue or discomfort at all. That’s also thanks to the abundant padding of the earcups. Speaking of the earpads, they’re angled so that the back is thicker than the front, making the headphones sit better on your head; the lack of vertical rotation can be seen as a negative point though as people with glasses (like me) or who need more adjustment room can find themselves less at ease. The only issue one could raise is the lack of adjustability for the gimbal, which can’t rotate vertically. 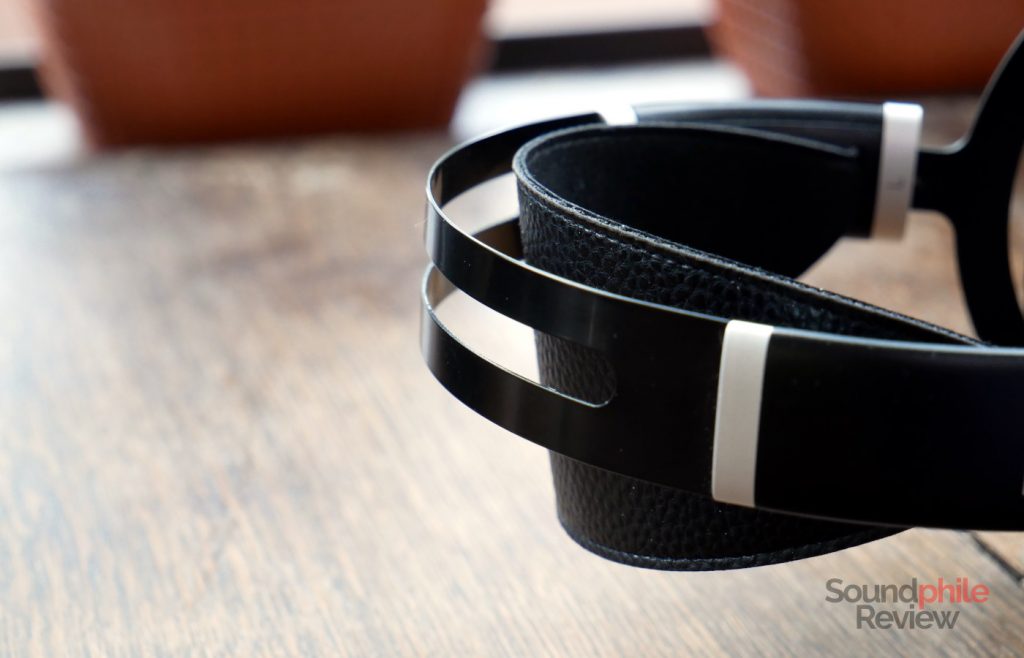 Isolation, as you can imagine, is non-existent. 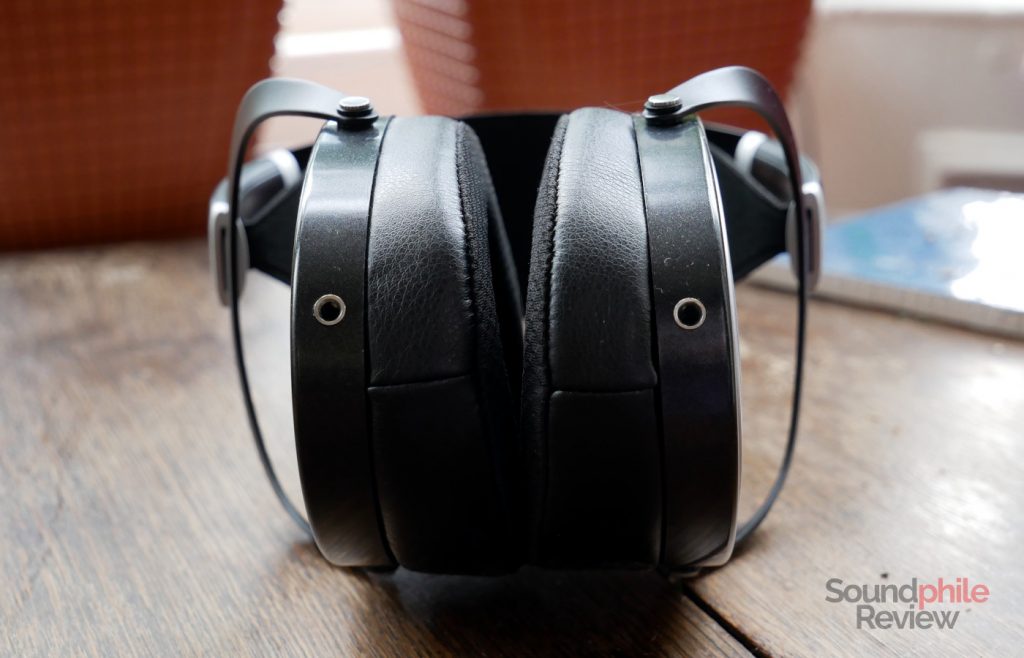 The cable is… well, not exactly premium in its build. It’s quite similar to the one included with the HE6se v2, which I dubbed “[something] that reminds me of a sausage’s skin (a vegan one, with the skin that says “cheap plastic” all over the place).” The judgement is not different in this case and I find this build quality not acceptable for a product that costs $1,000. Still, it doesn’t have any microphonics of sort and the jacks have metal housings, which is certainly a pro.

I tested the HiFiMAN Ananda using various sources, among them a Topping DX7 and a Drop THX AAA 789. Music files were mostly FLACs in CD resolution.

The objective for the Ananda design was to get a headphone that’s easy to drive and HiFiMAN definitely achieved this, as the Ananda can be driven by pretty much anything: even my laptop and my smartphone have enough power to handle it. The very nice thing about it is that the Ananda are planar headphones, so their impedance is constant throughout the whole spectrum and this means that a more powerful amplifier will not give you any difference in sound, contrary to dynamic headphones that can have wild swings in impedance (and, therefore, in power requirements). The takeaway from this is that you don’t need to spend an arm and a leg on an amplifier to get the best out of these headphones.

With 25 Ω impedance and a relatively high sensitivity of 103 dB, the Ananda are among the planar headphones that are easiest to drive. You need just 1 mW to bring them to 100 dB! That’s enough volume to be above the threshold that is considered safe and pleasant to listen to. If you really want to damage your hearing, with just 0.5 W you can get to 130 dB, which is guaranteed to make you permanently deaf in a matter of seconds. It’s also in stark contrast to other drive designs such as the HE6se v2, which require a whole lot of power.

Soundstage on the Ananda is decently wide but, despite the open-back nature of the headphones, it’s not exactly huge: music still appears to be reproduced around your head in a small, enclosed space. Imaging, on the other hand, is quite good, as you can easily understand the placement of the various instruments on the stage and each of them has its own place; the problem with the soundstage not being very wide is that the left, centre and right positions are almost conflated into one. Instrument separation is similarly good, with small details emerging even in complex tracks.

Bass is in line with my definition of “neutral”, with good extension down to the lowest area. While sub-bass is not in line with the rest, with a relatively steep slope that starts around 100 Hz, it still is more than present enough to be clearly audible and has enough force to come across as almost physical, like the rest of the area. Still, it’s worth noting that the Ananda do not offer the same deep rumble as other headphones like the HE-560, with sub-bass being noticeably recessed in comparison. On the other hand, mid-bass is more present and has much more strength. What you can find in the general bass area is a great amount of detail and good layering, together with impressive speed that collectively make instruments really come to life.

Midrange is shifted towards the upper area and can sometimes sound a bit thin, though there’s minimal sibilance. Voices sound a bit more nasal and breathy than they should, even though it has to be said this is not a major annoyance; in tracks such as Massive Attack’s Pray for Rain the voices are not as warm and full-bodied as they should. This bump in the upper region also makes instruments such as electric guitars, trumpets and violins pop out more and affords them extra energy without making them too intense (e.g. in the wonderful The Bridge of Khazad-Dum from the soundtrack for The Lord of the Rings: the Fellowship of the Ring). What I really like is the speed and detail of midrange, which makes drums and other percussive instruments quite enjoyable and realistic. The bright signature of the Ananda’s mids makes them not quite neutral, but close enough.

I am quite sure that treble is going to be divisive as it is the most accentuated region in the Ananda’s signature and it can sound a bit fatiguing at times. That’s because the rise in the upper mids region keeps on going in the lower treble area, where it peaks before it finally starts its descending turn. There’s a relatively stable presence in the middle region, but then the upper one has less extension than ideal. Still, the overall balance is enjoyable as treble is devoid of any hard peaks that would make it fatiguing and harsh. The level of detail is commendable and able to let you hear quite a large amount of micro-details (e.g. the movement of the brush on the cymbals), though the relatively low extension robs the sound of more air and openness – and this probably contributes to the soundstage not being ginormous.

Here’s a selection of comparisons with the Ananda:

The HiFiMAN Ananda are very pleasant and enjoyable headphones, amazingly comfortable and with a sound signature that’s easy to like. They do sound fantastic, with a slightly bright twist to an otherwise almost-neutral signature that can render any track effortlessly. What I really appreciate about the Ananda is their detail retrieval, which is quite fantastic throughout the whole spectrum. Speed is also one of their defining characteristics, as transients are quite fast and able to convey that impalpable sense of immediacy of percussion instruments (among others) that make them so peculiar.

Still, for all the positive things that can be said about the Ananda, at almost $1,000 I expected a bit more, especially in terms of their technical ability. Maybe I’m excessively demanding, and that’s entirely possible indeed, but in many ways the Ananda are not really a substitute for the HE-560 that they aim to replace (and which I own and love dearly). Their characteristics make them quite enticing overall, with best-in-class comfort and a very low entry bar in terms of amplification. They’re quite a great product which I recommend you to listen to.