There’s this obsession in the audiophile world about the need to “purify” every signal because doing so would purportedly lead you to getting a much better experience with never-before-heard details and engagement. Most of that is pure rubbish and akin to homeopathy – in other words, a scam. There is something to be said for some of that, though. When I was reviewing the iFi iDSD Diablo I got the chance of trying out the iFi iPurifier3 as well – it was included in the package, after all. I tried it in multiple conditions and found out that it does… exactly nothing. But does it really?

Disclaimer: I got this unit on loan from iFi. They sell the iPurifier3 for $130. You can take a look at the official product page for further info. 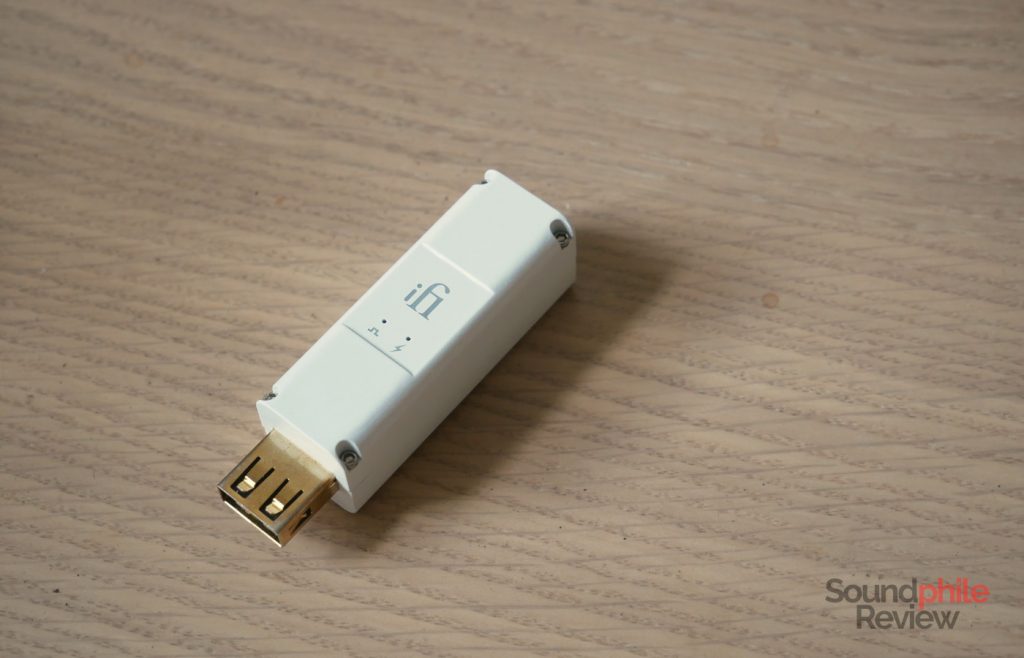 The iFi iPurifier3 is an unassuming device that looks very similar to a common USB key. The only difference is that it’s quite bulkier than the average USB key and it has different connectors. My unit had a female USB-A connector on one side and a female USB-B connector on the other, but there is also another variants as well with male USB-B and female USB-B. Choosing which one to use is dependent on which device you are going to use.

The iPurifier3 is, as is customary for iFi, very well built. It is made of two pieces of metal (aluminium?) held together by four screws; the assembly is quite impressive as there is just a very small seam between the two parts. It does feel quite robust. The body is painted white, while the USB connectors are plated in gold. There are also two LEDs: one for power and the other for data. As those are distinct lines in USB connections, the iPurifier3 tells you if there is an issue with either. 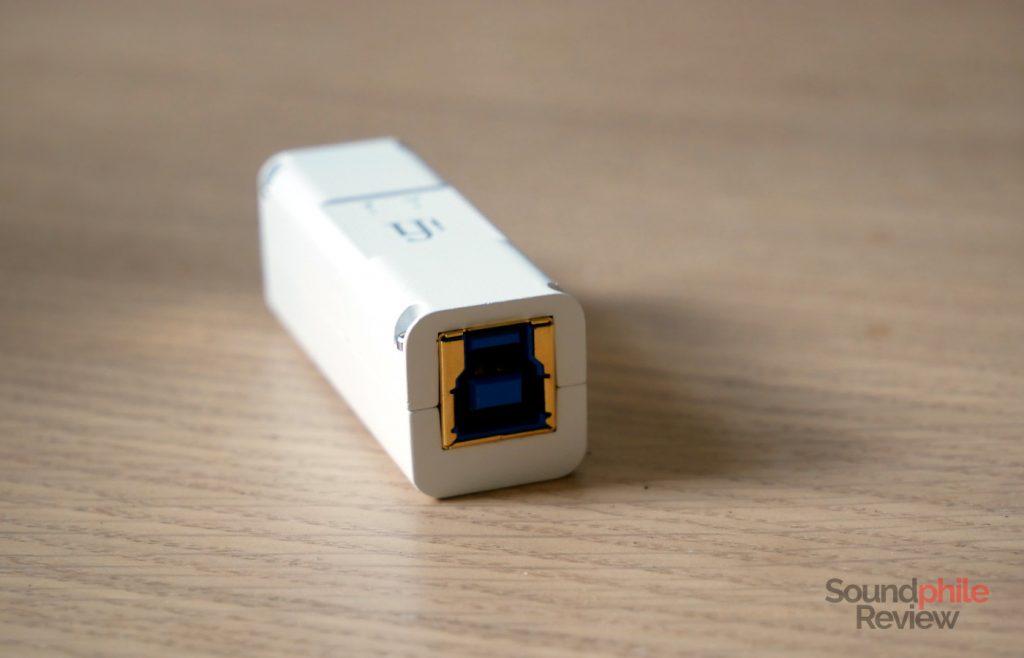 The only issue I can find with the build is that the device is quite large and relatively heavy. This places a lot of stress on the USB connector of your receiving device (e.g. DAC), especially once you add the weight of the cable on top of it. It is then surely better to place something underneath for the iFi iPurifier3 to rest on, so that the USB connector’s health is preserved for longer. 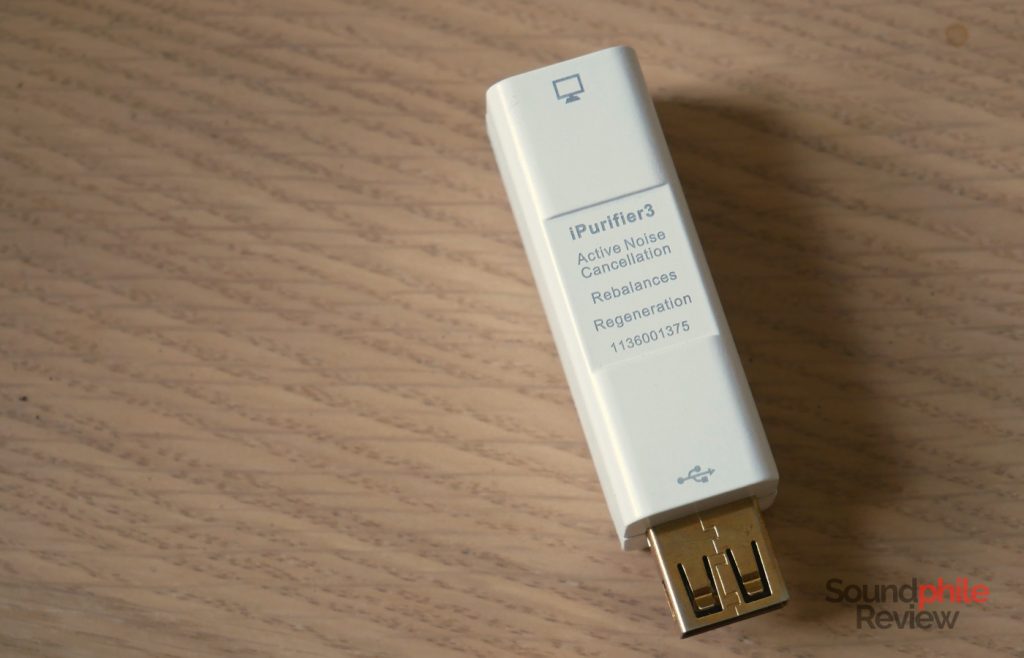 The iPurifier3 uses the REGenerate2, REClock2 and REBalance2 technologies, all of which aim to basically “purify” the USB signal in both its data and power components by removing the noise that can build up in the cable between the source device and the destination. Those are built on top of the use of tantalum capacitors, Vishay MELF resistors and Panasonic OS-CON capacitors – basically, top-notch components, as iFi has gotten us used to. 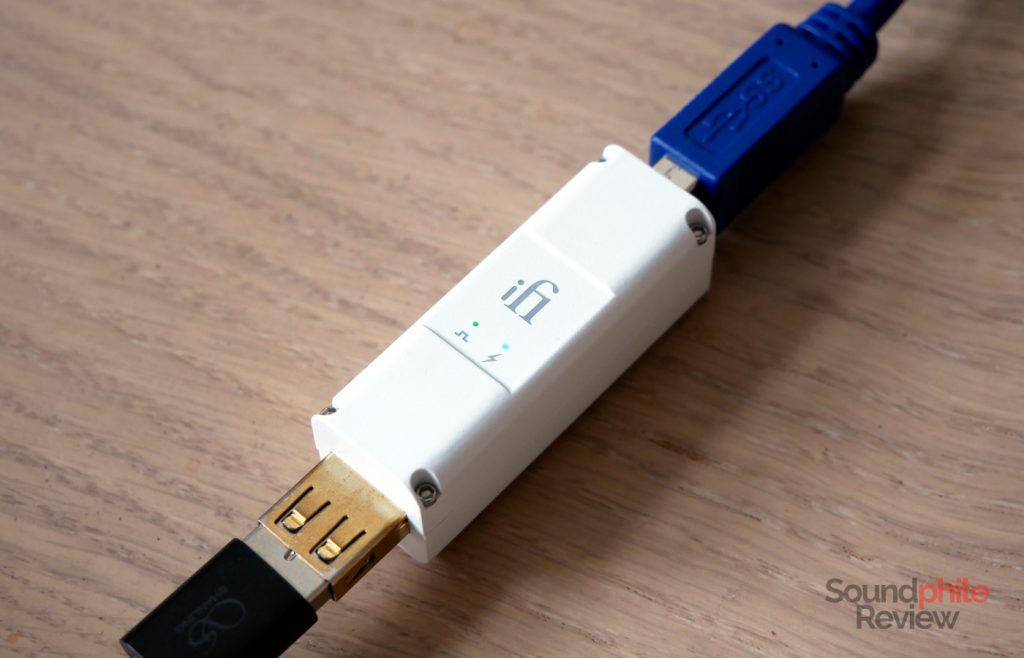 In order to test iFi’s claims about noise suppression, I decided to use the E1DA 9038D: the unit I received was part of the initial batch, which had issues with USB 3 that resulted in a faint yet audible hiss in the background. My expectation was that this would be solved by the iFi iPurifier3, given the claims iFi makes about its ability to regenerate the signal and “clean” the power. To my surprise, though, that didn’t materialise and I heard the same faint hiss in the background. Now I am quite sure that this is not an issue with the 9038D itself because it does not have the hiss when I connect it to my phone. The same happens with my Topping DX7 and with the iDSD Diablo I reviewed: I could not hear any significant differences.

This is not only limited to removing noise, which is the target application of this device. I couldn’t hear any differences in every other regard. I tried listening to it multiple times, putting it in and then taking it out, and I couldn’t hear any improvement – nor any deterioration either. It just didn’t seem to do anything to the music I was listening to.

The fact that there was no difference I could discern doesn’t mean, however, that the iPurifier doesn’t do anything at all. The problem with this kind of devices is that they indeed do something, but most often the impact is so small it’s not detectable. In my case, the iPurifier3 did not bring any detectable benefit to any of the devices I use: noise was there if it was present before, and if it wasn’t I couldn’t hear any difference anyway.

The iFi iPurifier3 should, in theory, remove all of the USB-related noise issues. In practical terms, however, this is not the case with any of the devices I have tested. Does this mean that it is pure snake oil? The answer is (probably) no. I guess that if I took an oscilloscope and looked at the USB signal I would indeed find a difference (unfortunately I did not have a good one on hand for this review). Anyway, the main takeaway is: although this difference might be there in theory and in practice, it doesn’t really impact what you hear. It may have made the difference twenty years ago, when USB was still nascent and devices were not as sophisticated as they are nowadays, but today this device is probably basically useless unless your system is complete crap (sorry about the language). I’ve read all sorts of wild claims about the iPurifier3, from people claiming it makes “bass better behaved” (what does that even mean?) to hyperbolic claims of volume being increased (I would really love to hear an explanation of why that would happen…); either there was something very wrong with these people’s systems or there’s something else at play, probably that thing called “placebo effect” which is always present in these cases.

My tests were not exactly scientific, mind you. I didn’t do blind tests. But the issues that this device should have solved were still there when I was using it, and I could not hear any other significant benefit from its use. Should you then buy the iPurifier3? In short, the answer is no, unless you have extremely bad USB issues. In that case, though, my suggestion is to try with a good cable before splurging on an iPurifier3 – it happened to me in the past and a simple £15 cable solved all of my issues (no point in spending more, really). Given that this device costs almost ten times as much, my advice is to try it out with your system before deciding; you might indeed find an improvement, although I suspect that it won’t be any of the hyperbolic changes you read around in other reviews: a much subtler difference is to be expected and, considering what the iPurifier3 aims to do, it would be worrying if it was greater.

iFi iTraveller review: a great case for your audio stuff