Everyone is making “true wireless” earphones nowadays and models with good sound are finally starting to pop up in the lower end of the market. Moondrop has now made a name for themselves in the audiophile market thanks to affordably-priced yet good-sounding products (e.g. the Aria) and the company is intent on repeating this scheme with TWS earphones as well. The brand’s first foray in the market, the Moondrop Sparks, are quite competitive from the perspective of price and, more importantly, they are absolutely banging from the perspective of sound.

Disclaimer: I received this unit free of charge from Shenzhen Audio. They sell the Moondrop Sparks for $89.99. 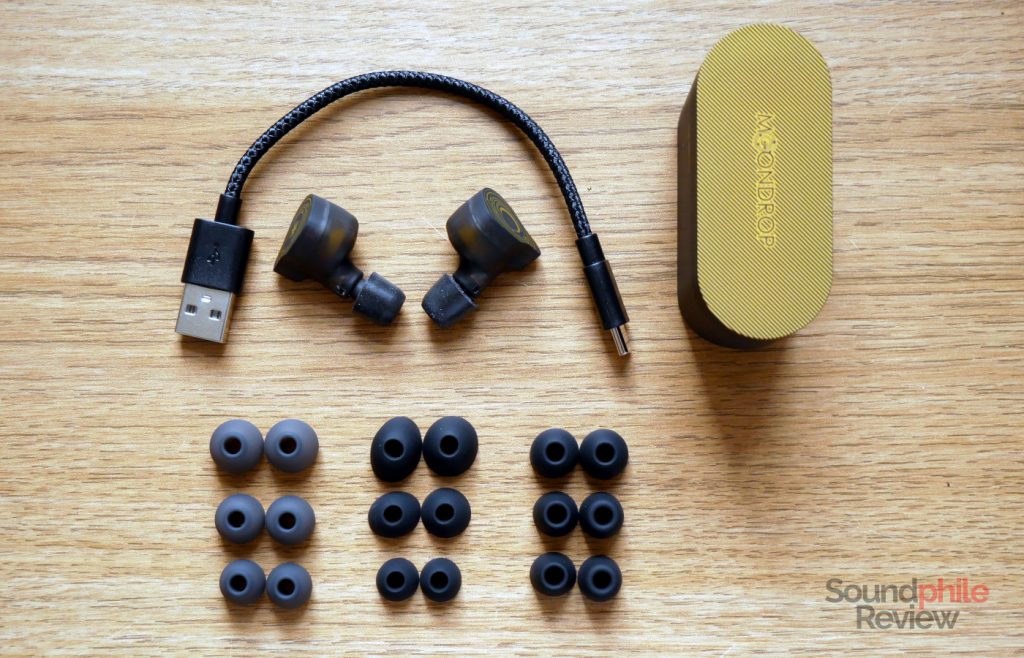 I find the sheer amount of accessories that Moondrop included with the Sparks to be quite amazing. There are a USB to USB-C cable (which has a braided sheath and metal housings, which is quite uncommon!) and three sets of silicone tips, each of three different sizes, plus a pair of foam eartips (only in small size, which isn’t great but better than nothing). The only thing I could complain about is the fact that the manual I received is entirely in Chinese – not to be Eurocentric, but it’s far from the simplest language to learn, so other languages would have surely helped me understanding what was written there. 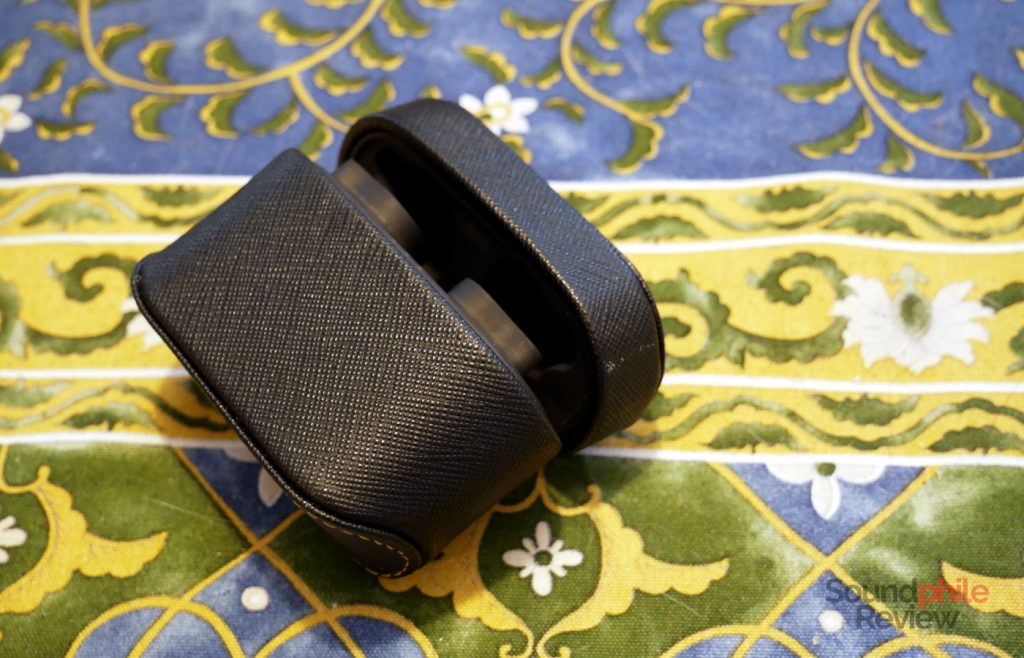 In addition to that, Shenzhen Audio also sent me a faux leather case that goes around the dock-case (I know, a case for a case…). It’s quite well made and it surely is attractive, but I didn’t find it too practical: it keeps on coming off from the lid and it doesn’t allow it to open completely, therefore limiting your ability to reach the earphones (or simply falling off). It’s also difficult to remove. But it does offer a nice additional layer of protection to your earphones, which is always welcome. It retails for $9.99, which is a fair price. 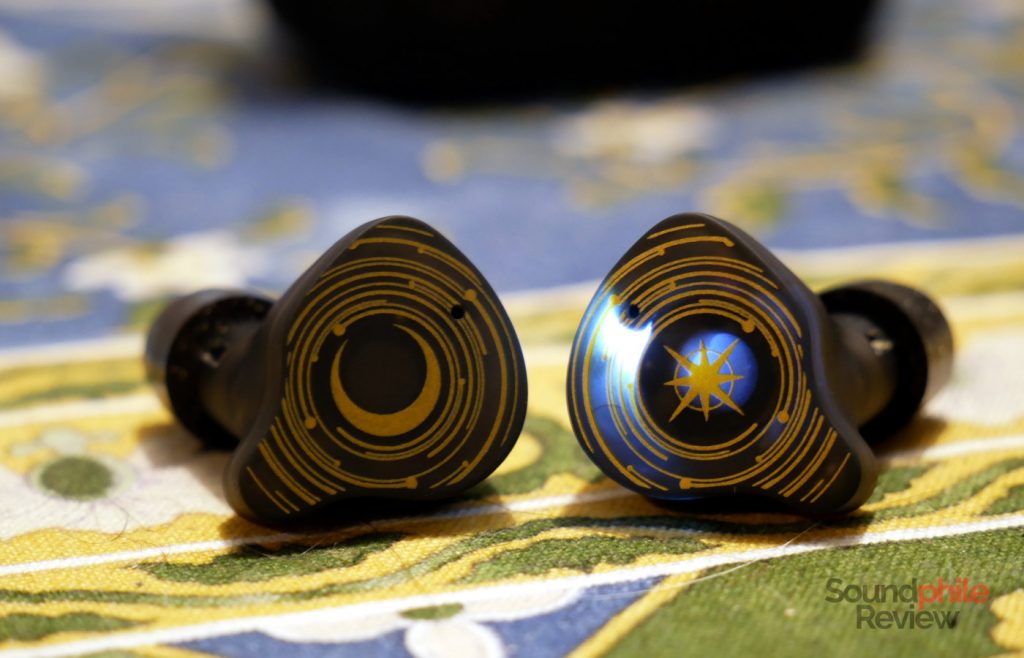 The first thing I thought when I saw the earphones and their case was that they seemed to be out of a sci-fi movie from the ’80s or ’90s. Their use of semi-transparent plastic is quite unique in today’s landscape and has a bit of a (welcome) retro feeling; it reminds me of Apple’s G3 line of Macs, with their colourful transparent plastic. The symbols on the earphones, which appear to be the Moon and the Sun, initially fooled me: the fact that they’re inscribed into sci-fi-esque circles and drawings brought me to think of Star Wars. Surely the Sparks look quite unique, even though the shapes of the shells are very commonly seen (they’re the usual IEM-like earphone shells). 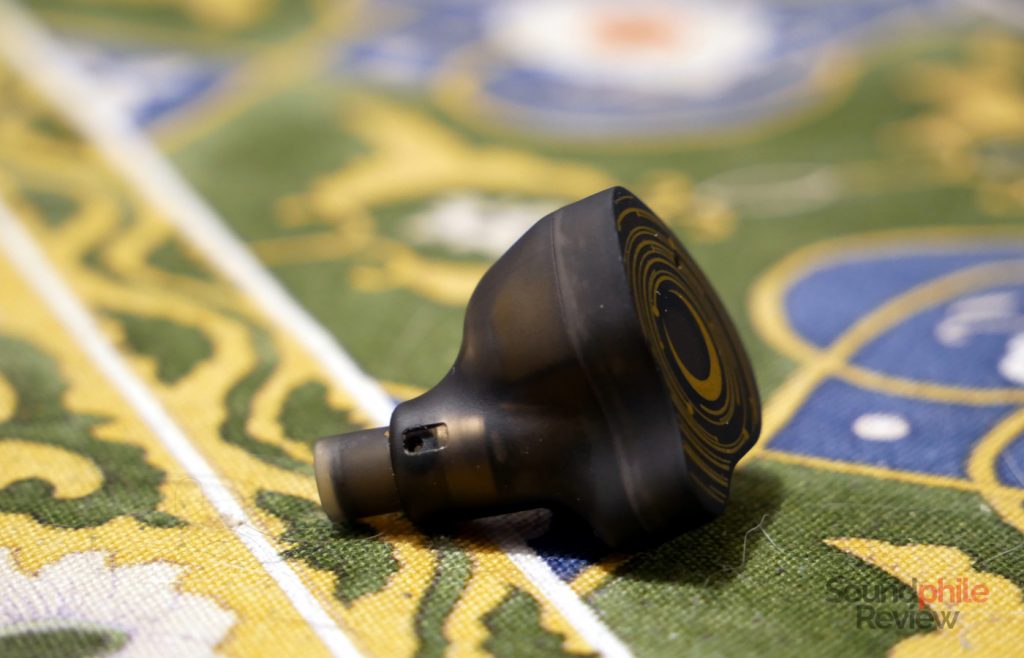 In terms of build quality, the Moondrop Sparks appear to be quite good, although the plastic leaves me with a sensation of frailty – though that’s probably because of the transparency. In fact the shells appear to be as robust as any other well-made plastic shells.

Comfort is quite exceptional. I can wear the Moondrop Sparks for four, five hours and they still don’t make me feel fatigued. This is the result of a combination of curved shapes and (relatively) small size, so they sit nicely in my ears without causing any discomfort. The nozzle is quite large, so you can’t use tips like the SpinFit CP360 for TWS earphones. 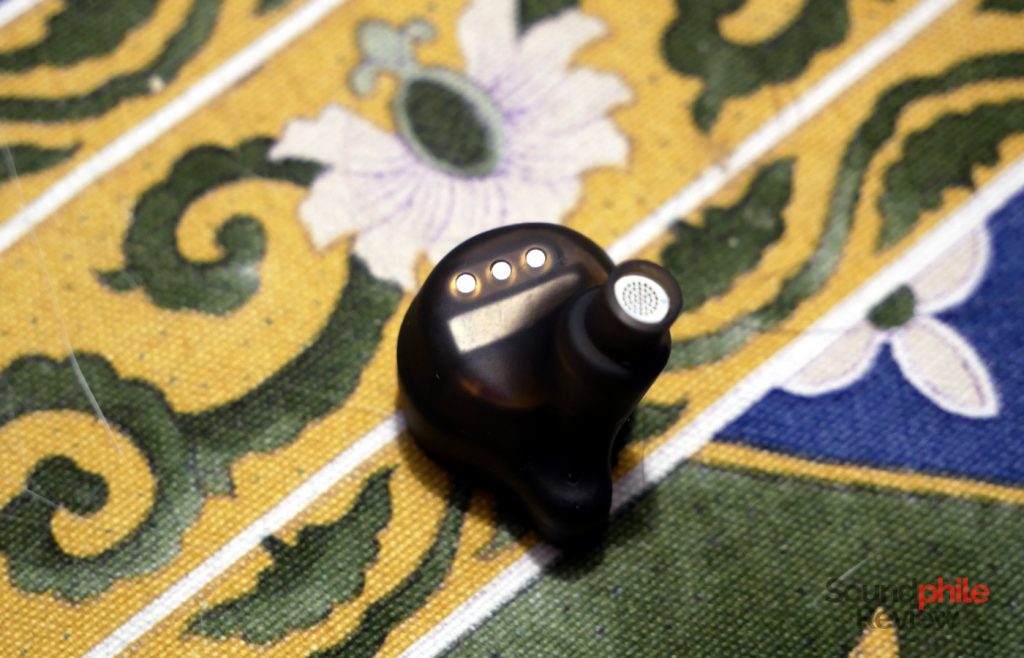 Although I expected them to offer at least some degree of protection from outside noise, the Moondrop Sparks offer virtually none unless you use the foam tips. In that case they offer a bit of passive isolation. They otherwise leave you exposed to the sounds outside.

The case is relatively small, enough to be pocketed anyway, and has a few unique features: there are three LEDs on the front that indicate the charge and you can see them from both the front itself and the top (once you open the lid). The case is made with the same semi-transparent plastic as the shells of the earphones, while the lid has the Moondrop logo printed on it along with a motif of oblique lines. The back hosts a USB-C port and an NFC chip, so you can pair the earphones to your phone easily. One thing I really like is that you can use full-size tips like the ones you normally use on wired earphones and they still fit inside! That’s quite rare and a welcome feature. 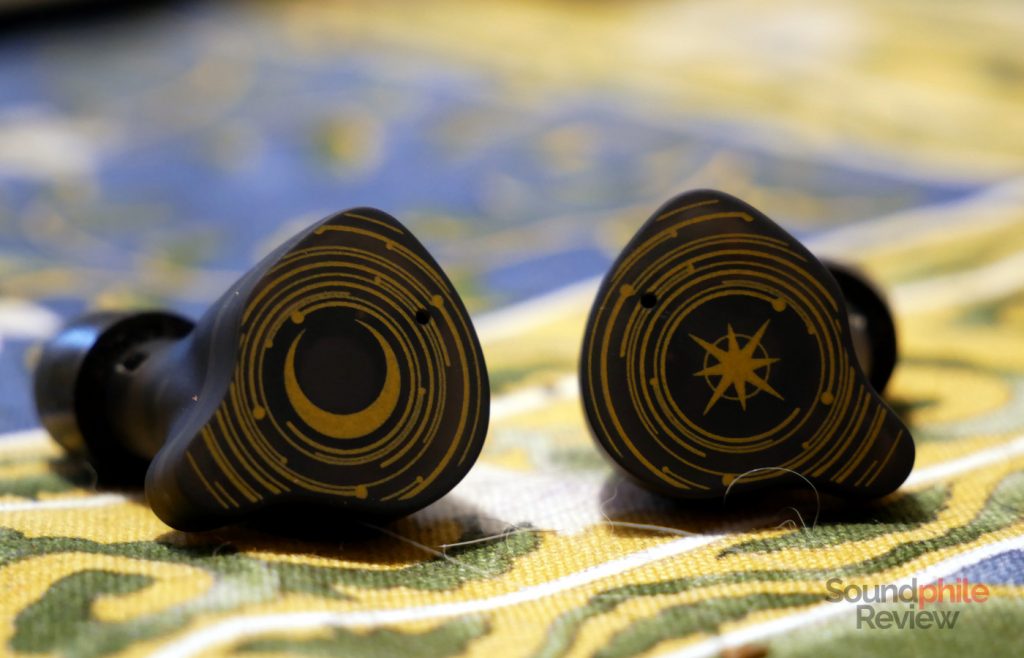 The Moondrop Sparks offer a Bluetooth 5.2 connection with the SBC, AAC, aptX and aptX Adaptive codecs which makes them quite complete and rivalling higher-end earphones. The range and connection quality are both rather good, with no stuttering even with heavy traffic in the 2.4 GHz spectrum and good resistance in my highly scientific range test (“let’s see how far I can get from my computer before there’s interruptions”).

There are touch controls on the Sparks and they’re quite useful. There’s no command associated to a single press, so even if you touch the surface inadvertently (e.g. if you touch your hair) you won’t trigger any unwanted command. There are just two things you can do: play or pause music with two taps and skip to the previous (left earpiece) or to the next track (right earpiece) with three taps. These controls also apply to calls (two taps to answer or end the call, three taps to reject it).

One thing I didn’t especially like is the lack of volume control. While controlling volume from my computer wasn’t an issue, doing so with my phone and my Shanling M2X DAP proved less practical: the minimum volume was still far higher than what I would have liked, especially in a (relatively) silent environment like my house.

The microphones are decent, but people on the other side will hear that you’re wearing earphones and will perceive you as a bit distant. In a relatively silent environment that shouldn’t be too much of an issue.

Battery life is quite decent: I were able to use them for even 6 hours at a time, which is quite significant for earphones in the sub-$100 price range. The case holds about 3 additional charges, so this brings the total to about 24 hours of playtime – quite good!

I mostly listened to the Moondrop Sparks by pairing them to my HP EliteBook 745 G5 computer and my Shanling M2X DAP, both loaded with FLAC files (a large chunk of which was ripped from CDs).

Soundstage is moderately wide, but still relatively limited. I would say that it is in line with expectations for closed-back earphones, as it gives you the impression that sound diffuses in a decently wide room, but that it ultimately originates in your ears. Imaging is decent: you get the general idea of where the instrument is, though you can’t point to its exact location, plus there’s only a limited array of positions where the various instruments can reside. Instrument separation is quite good for earphones in this price bracket, even in relatively complex and layered tracks. What I also quite like is the physicality of it: bass hits quite hard when it is required to.

Bass has quite a good depth to it, which is especially rare in the sub-$100 range. It offers very good presence down to ~40 Hz, with a relatively slow slope as the frequency goes down; it still retains a good bit of presence at 20 Hz. While this is kind of exceptional in any case, it is even more so because bass has very good speed and relatively short decay, which make it sound quite fast. It’s not “balanced armature fast”, but it’s quite tight for a dynamic driver! There is a mild bump in the mid-bass area, but bass is mostly neutral(ish), with a tad more presence than what perfect neutrality would dictate. Layering is also quite good and detail is commendable, so the Sparks appear quite competent.

Midrange is lively and vibrant, thanks mostly to the fact that the Sparks appear to follow the Harman target curve in this area, therefore they have a small boost to the upper range. Still, they sound almost neutral to my ears (and probably entirely neutral to most people). I quite like that the mids appear right where they should be in terms of general positioning in the signature, despite their emphasis. They offer a very good balance, coupled with very good detail even in complex tracks where it’s easy to lose something to the sheer quantity of stuff that’s happening. Again you find good physicality here, with drumbeats hitting you with good strength and with great speed.

Treble is quite well balanced with the rest and is neither too forward nor too left at the back; this is the only area where things could be a bit better, with detail that’s decent but not exceptional and a couple of peaks which are rarely heard (e.g. in Snarky Puppy’s Bigly Strictness, around minute 2:00), but they sound a bit harsh when they’re there. Extension is quite good overall, a fact that lends the Sparks good air and openness.

Let’s compare the Sparks to their closest competitors:

I will add more comparisons at a later date.

Once again, Moondrop shows how it’s done. The Sparks are quite affordable, but they still manage to impress with a sound quality and technical ability which are more typical of wired earphones at this price point. They also deliver on basically all other aspects, which is quite something. Their unique design also breaks from the mass of earphones and case-docks that all look the same.

When it comes to sound, the Moondrop Sparks deliver on their name with a lively, engaging sound. While they’re by no means perfect, they deliver astounding quality for the price, with bass that hits hard and midrange that sounds just right, while treble does its thing without any fatigue. Combine this with great features and specs and you get a real winner. This is one of the few cases where I feel like the Lypertek Tevi have something close to a competitor, which is by no means a small feat.