The path to enlightenment goes through… audio?! That’s what iFi was thinking (probably) when they started building the new iFi ZEN line-up, of which the iFi ZEN DAC represents the first (and only, at the moment) DAC with an amplification stage.

Disclaimer: I received this unit on loan directly from iFi. They offer additional information on the ZEN DAC on their website. 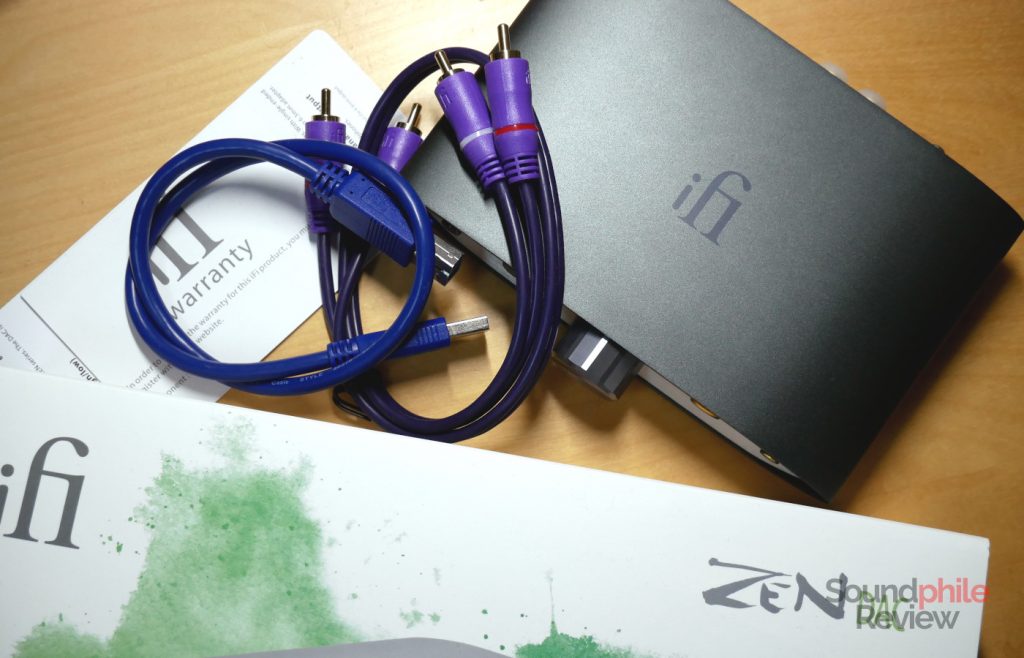 The iFi ZEN DAC’s packaging is different from iFi’s usual one: the box is still predominantly white, but it has much more colour than usual and a picture of the device on the cardboard sleeve. The contents are quite minimal: in addition to the ZEN DAC itself there are just a USB 3.0 cable and the manual. It’s quite a spartan set of accessories, but that’s enough for the basic needs.

The only thing which could see improvement in my eyes is the USB cable: it is just 50 cm long, which is not enough for many desktop PC setups; as it is a USB 3.0 cable with a Type-B 3.0 connector it’s also improbable that one has a longer one laying around. a 1 m cable could be a better choice. 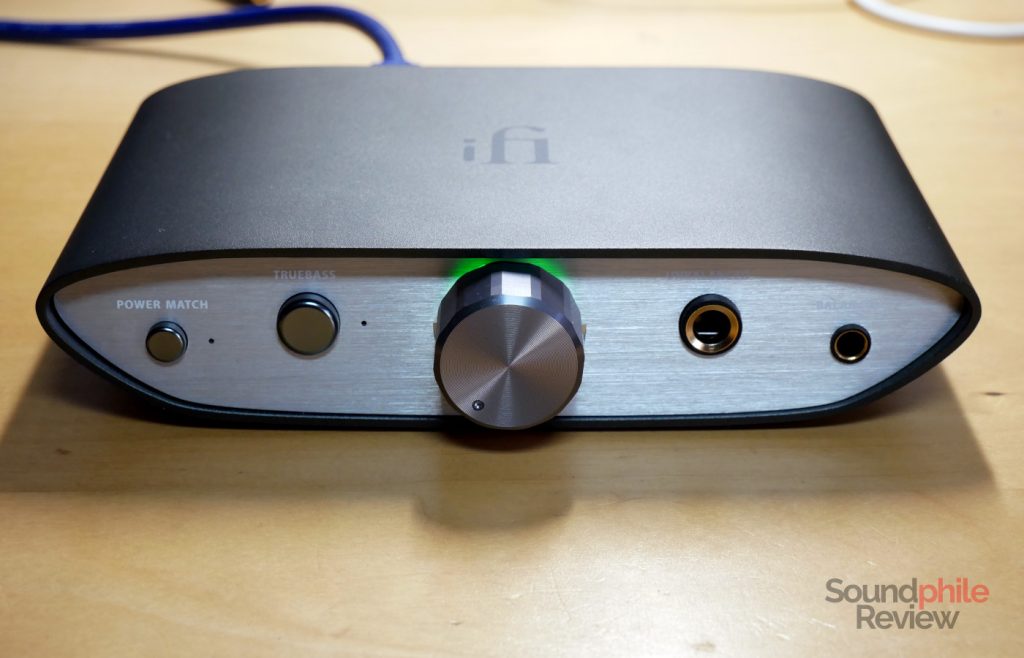 The design of the ZEN line, including the ZEN DAC, reminds me of furniture from the 1950s – trapezoidal shapes with curved angles and inclined planes. It’s certainly highly unusual in a positive way, and it appears almost retro. That’s just because of the general lines, though, because the details are exquisitely modern. I quite like the fact that the front is perfectly symmetrical: the buttons on the left are the same size and in the same place as the jack connectors on the right. It’s a small touch, but one that speaks of attention to detail. 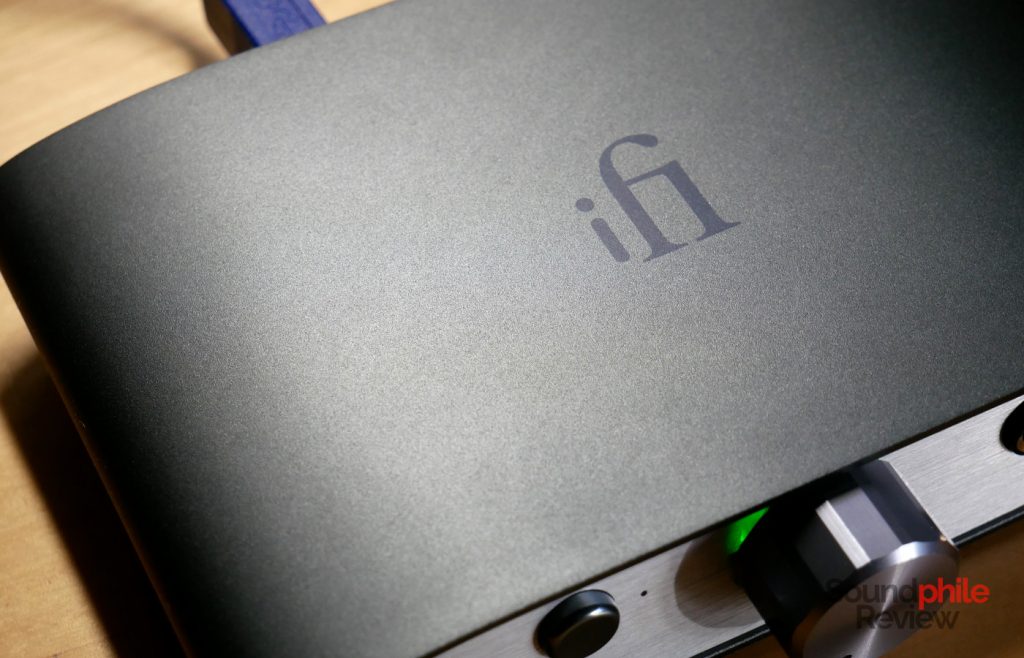 The front hosts a large volume knob, made of aluminium and with a smooth surface; the sides are cut so that there is a polygonal shape instead of a smooth, cylindrical surface to help with grip. There’s a LED light behind it that acts as a power LED and as a status LED which changes colour based on the type of media being reproduced. On the right side are the 6.3 mm jack and the balanced 4.4 mm jack, while on the left are the “power match” (gain) button and the TrueBass button. 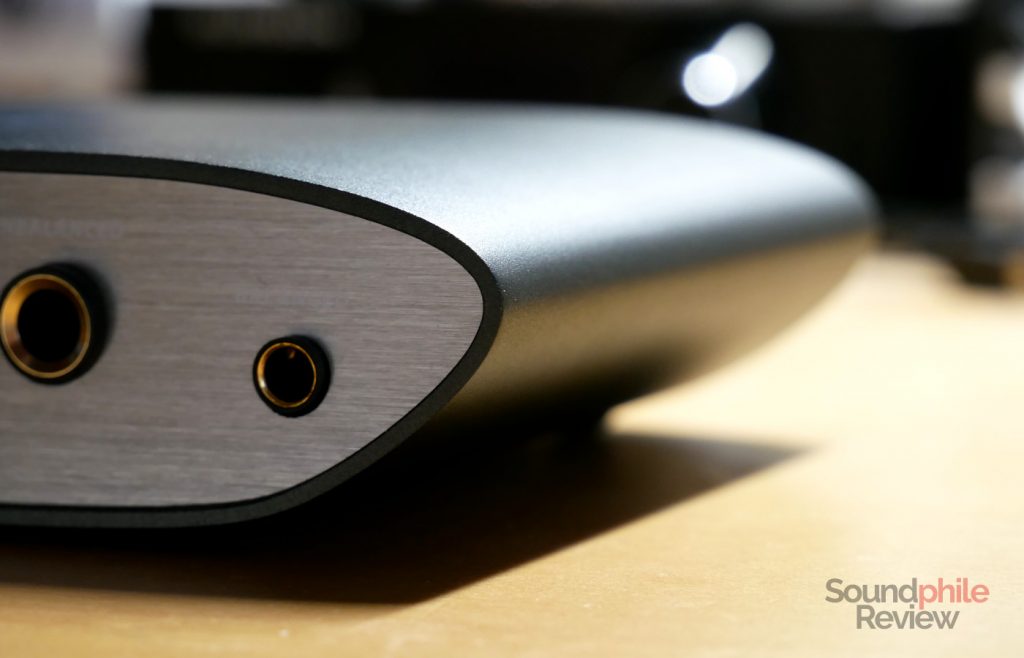 The device is made of a single piece of metal which constitutes the shell and which is closed on the front and back sides by two flat sheets of metal. The front and back sides are brushed, while the rest is plain. The ZEN DAC appears to be quite well put together and the materials appear top notch. It is refreshing to see such great build quality in the sub-$200 price range! 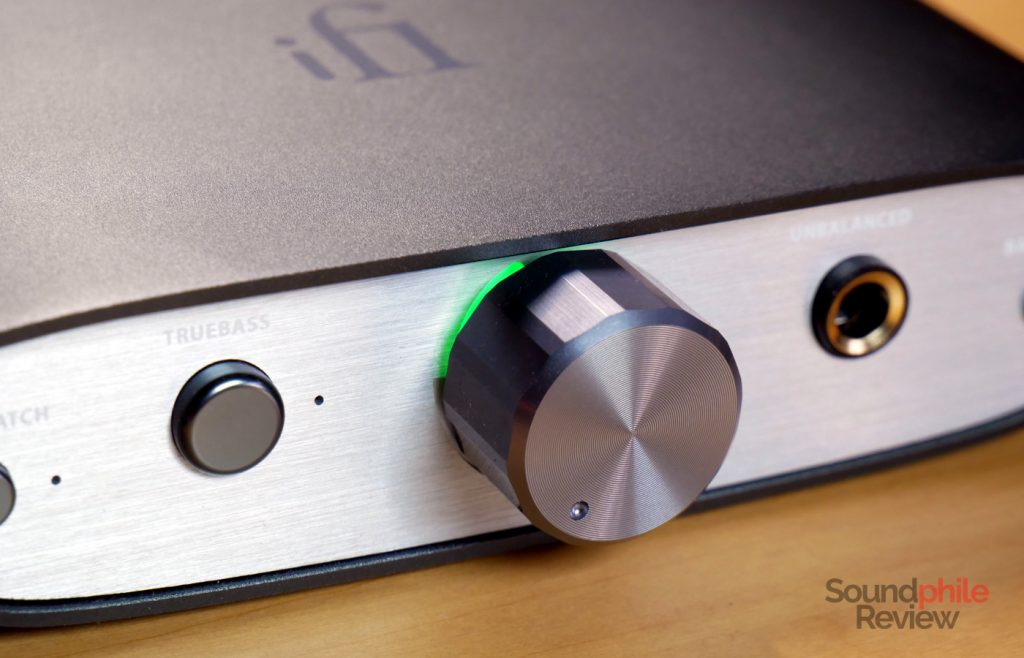 The volume knob spins very smoothly, with a very nice feeling. It requires a bit of force to be spun, so it also gives you confidence in setting the volume at just the right level thanks to this “weight”. It has almost no imbalance zone nor dead zone: the two channels are balanced with the knob on 8 o’clock from a starting position at 7 o’clock! iFi used a high-quality potentiometer despite the very low price of the ZEN DAC. 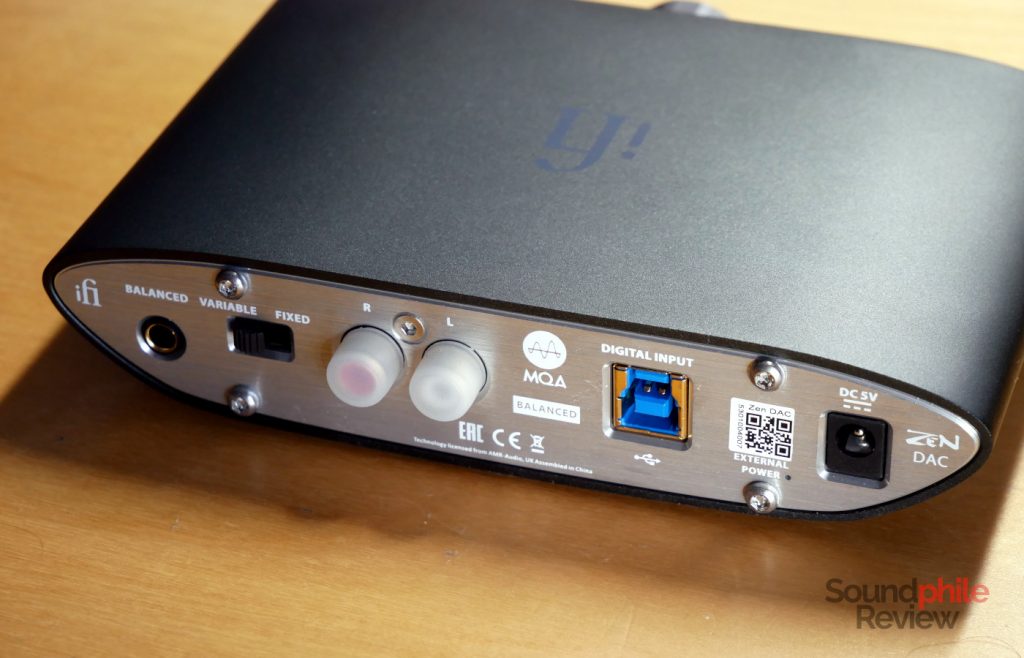 In terms of inputs the iFi ZEN DAC is quite limited: there’s USB, and that’s it. Output is more varied as on top of the aforementioned headphone jacks there are two RCA sockets and one 4.4 mm jack (which one can then convert to other standards, such as two XLR3 connectors).

The ZEN DAC offers two line out modes: fixed and variable. The fixed mode outputs the signal at maximum volume independent of the volume knob, whereas the variable mode allows you to adjust the volume (we might call it a preamp mode).

Thanks to the fact the Zen DAC does not (strictly) require a mains adapter it can be used as a transportable solution – meaning not one that you can use while out and about, but one you can take with you (e.g. to the office). It also does not have a power switch, so there is no way to turn it off.

The iFi ZEN DAC is among the few desktop DAC/amps to offer balanced output in the sub-$200 range. The advantage of such a configuration is that the ZEN DAC outputs 330 mW when the balanced connection is used with better signal-to-noise ratio than single-ended. Not only you get more power, it’s also cleaner. And it’s enough to drive most headphones, even those with high impedance.

iFi uses Burr-Brown DAC chips with an internally-developed amplification stage. The company maintains these are the best-sounding DACs on the market and while I can’t confirm that (99.9% of DAC chips sound the same to me), they definitely don’t sound bad.

Among the headphones I used are the HiFiMAN HE-560, the Hyland Headphones Saturn One, the Moondrop A8 and the Shozy SG. Most of the source files were FLACs ripped from CDs and therefore in 16 bit / 44. kHz resolution. 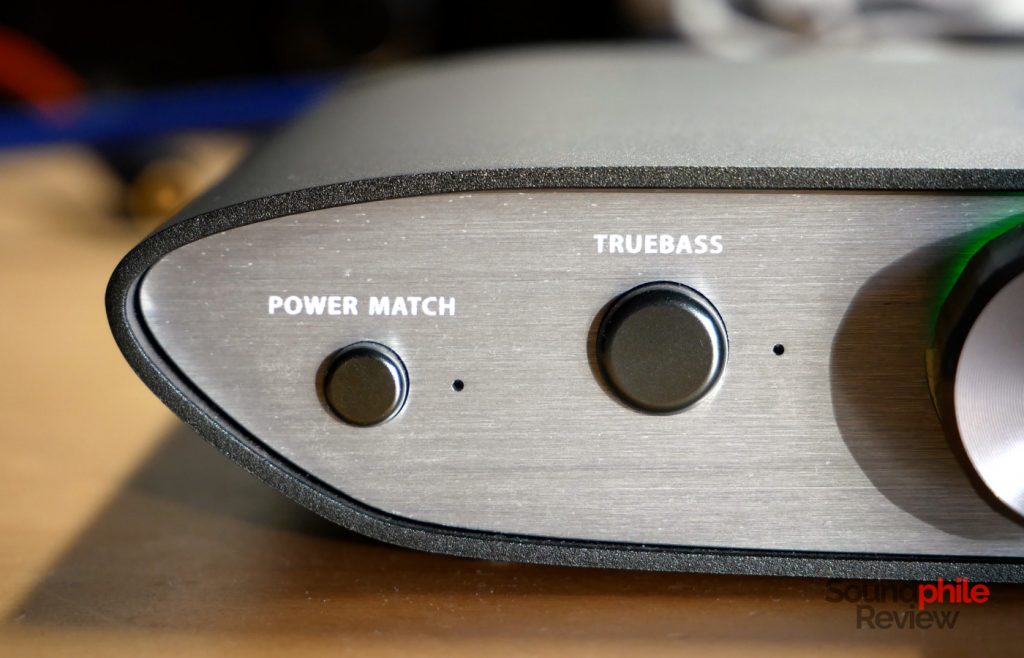 The iFi ZEN DAC had no problem whatsoever driving my HE-560 in both balanced and single-ended mode. Even without using the power match feature it could drive the headphones to fairly high levels: with the volume knob at 9 o’clock it would drive the HE-560 to my personal upper volume limit.

There is no audible background noise when using USB power. I can’t hide my surprise, given how USB 3 is generally a poorer connection than USB 2 for audio applications specifically because of the added noise. iFi definitely has something good going on with their design here.

The sound signature is neutral, if not ever-so-slightly warm. The emphasis on mid-bass and lower mids is so thin I don’t even know if it’s really there or if it’s my brain playing tricks on me. Overall the ZEN DAC sounds clean and clear, with adequately fast transients that deliver the necessary impact. Sound is just as I expect it to be: enjoyable and accurate.

The “True Bass” feature adds emphasis on bass, especially sub-bass: most emphasis goes to the lowest frequencies with a descending curve as the frequency goes up; this creates a deep, enveloping sound that envelopes you. The emphasis is done really well, so it never sounds excessive: bass is more present, but not in a way that makes it overpowering, muddy or uncontrolled. This is one of the best implementations of a bass boost I’ve seen to date, as it adds to the music without taking anything from it.

If someone told me when I started Soundphile Review that such a good product could be sold at less than $200, I would have laughed at that person. This just didn’t seem possible four years ago. Audio has made huge progress in the past few years and the most notable progress is in the “value for money” category. And the iFi ZEN DAC is especially notable as it delivers astounding value for little money, at £129. Although its low price may suggest otherwise to some, it can well be the centrepiece of any audiophile’s setup.

Thanks to its large power output and wide array of features, the iFi ZEN DAC pushes the boundaries of what is possible to get with a tight budget – it’s a statement about not having to renounce to good sound just because your wallet isn’t very deep. It’s a great device all around which would probably still deserve the same praise if it costed twice as much. iFi is delivering astonishingly good products right now, as testified by the hip dac, and the ZEN DAC takes that to the next level as it is really a game changer. I you want a desktop setup that does not break the bank but gives you everything you need, look no further.