I think of myself as a man of science. I try not to believe in anything and to rely on proofs and experiments as much as I can. If I can’t measure something, I try to understand how it works in theory and therefore how it should behave, and if things I find out are supported by theory or not. Let me say right at the start that I don’t believe in cables making a difference, but that’s because I think there’s nothing to be believed – something either works or it does not, there’s no need to believe. We’re talking about cables, not some god or the immortal soul. We have this saying in Italy which goes roughly like “I’m like Saint Thomas, I don’t believe in things unless they’re right in front of me” – that’s my approach. So when I was asked if I wanted to try the iFi SPDIF iPurifier, I was interested in finding out whether it worked or not.

Disclaimer: I received this sample on loan from iFi and I had to return it. Additional information is available on the company’s website. The device is sold at $149. 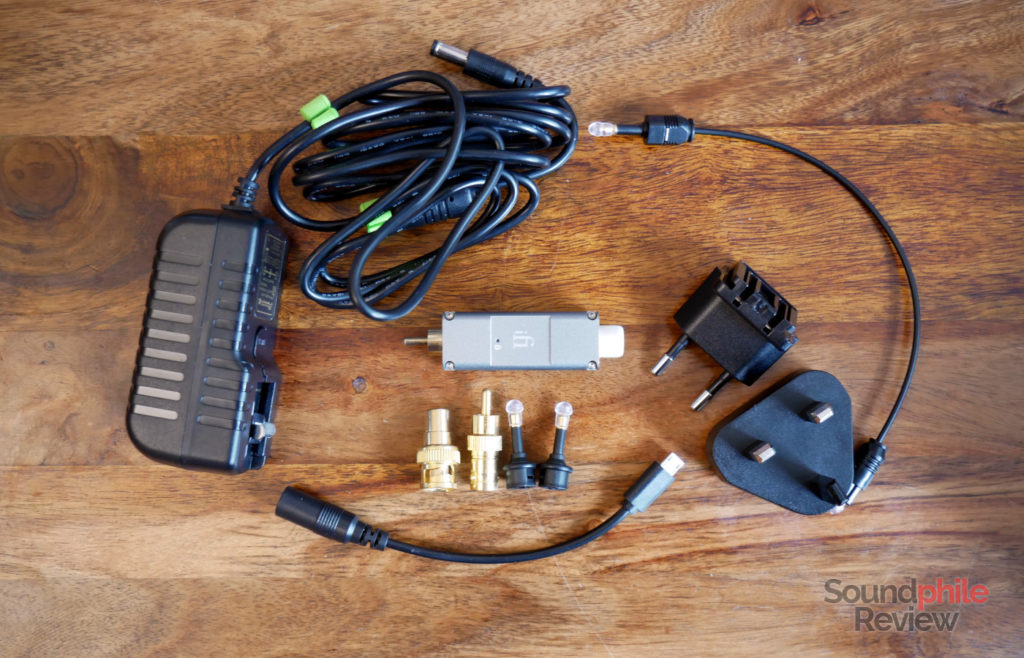 The box is the usual one we’ve already seen on all iFi products. Simple and effective. Inside are the SPDIF iPurifier, the power supply (which is an iFi iPower 5V, which should provide cleaner power than the average power supply), a short optical cable, two adapters for coaxial cables to RCA and vice-versa and two adapters for large optical plug to small. There’s also a manual. 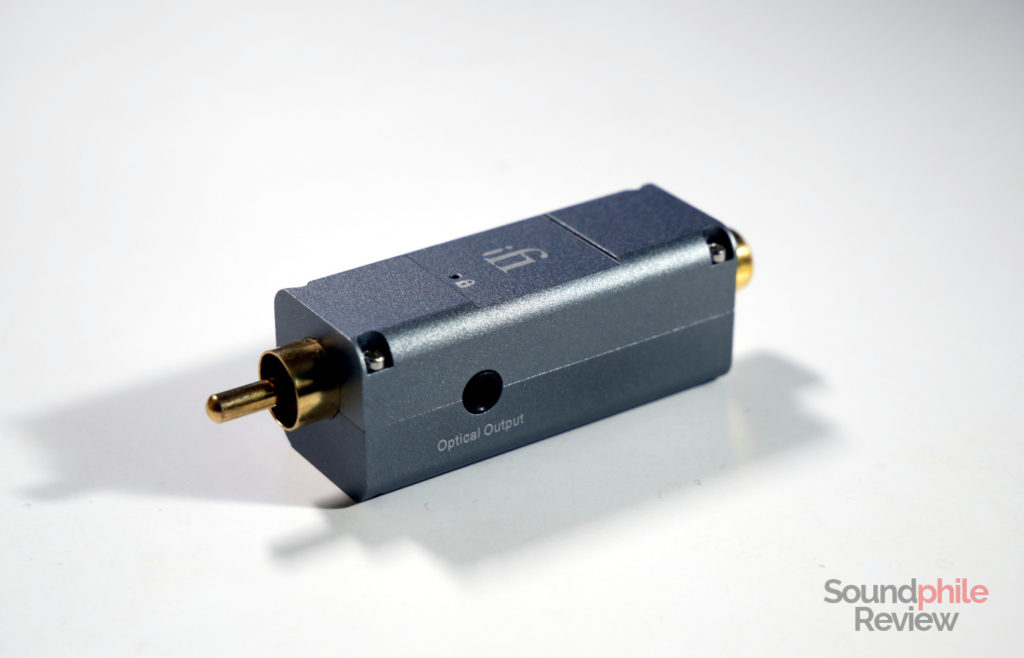 iFi decided to keep the SPDIF iPurifier simple. It is a metal parallelepiped with a female RCA connector on one side and a male RCA connector on the other. Looking more closely, there are also a micro-USB port and a mini optical port. The device is made of two aluminium halves held together by screws. It has the same finish as the iFi IEMatch2.5, with the same white text on the greyish background. On the top there’s an LED which indicates the status of the incoming stream: it has a variety of colours to indicate the sampling rate being played.

This simplicity makes it also appear as a solid device: its metal construction seems sturdy and durable as there seem to be no weak points and the shape itself appears to boost this impression. After all, it’s a metal parallelepiped! Build quality appears to be great as with all the products by iFi I’ve tried so far. 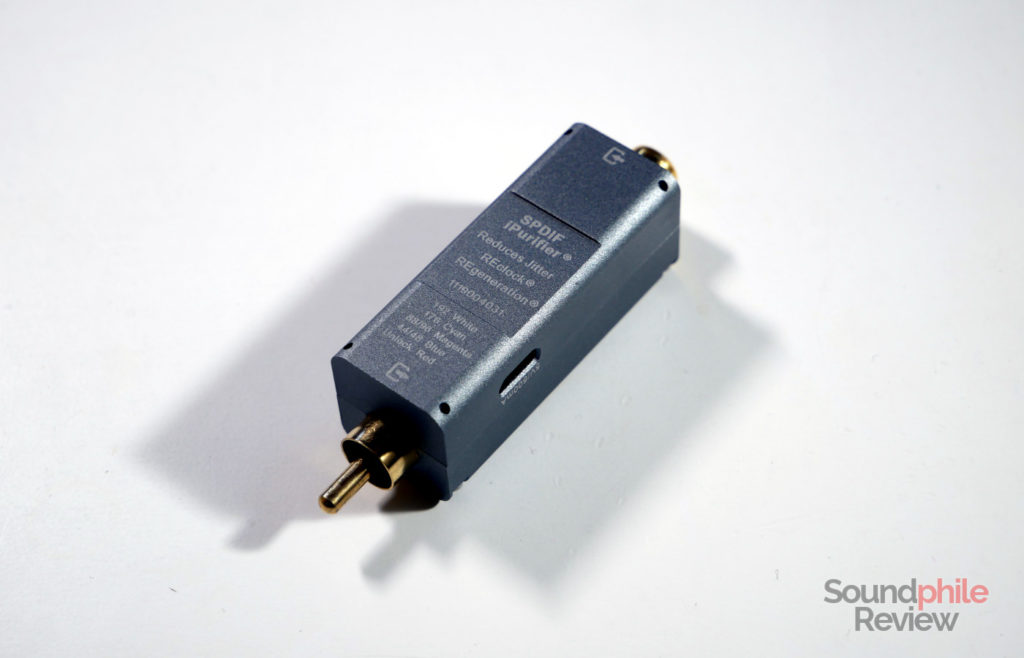 As the name implies, the iFi SPDIF iPurifier belongs to the family of “purifier” devices, which is devices that take a signal and try to remove unwanted noise. The SPDIF iPurifier applies this concept to SPDIF signals, either through optical or through coaxial or RCA cables. It supports basically any format, up to 24 bit / 192 kHz resolution for PCM streams. They say DSD and DoP are supported too, but it’s not clear what specific formats are supported. Other formats such as DTS or Dolby Digital are supported too. The iFi SPDIF iPurifier has “bit perfect” operation, meaning that it does not interfere with the signal. It takes the signal and “cleans” it from an electrical perspective, without modifying the contents.

How does it work though? The theory behind this type of device is that electric and electromagnetic interference may introduce unwanted noise and cause the signal not to be clean, therefore introducing unwanted distortions and causing issues. Purifiers therefore remove or limit this interference in the form of jitter, which is the difference in the timing of clocks between what should be and what actually is: as an example, if there is a delay in the signal arriving to the receiving device, this could cause noise to be present in the resulting audio signal or it could affect resolution. Is any of this relevant though? 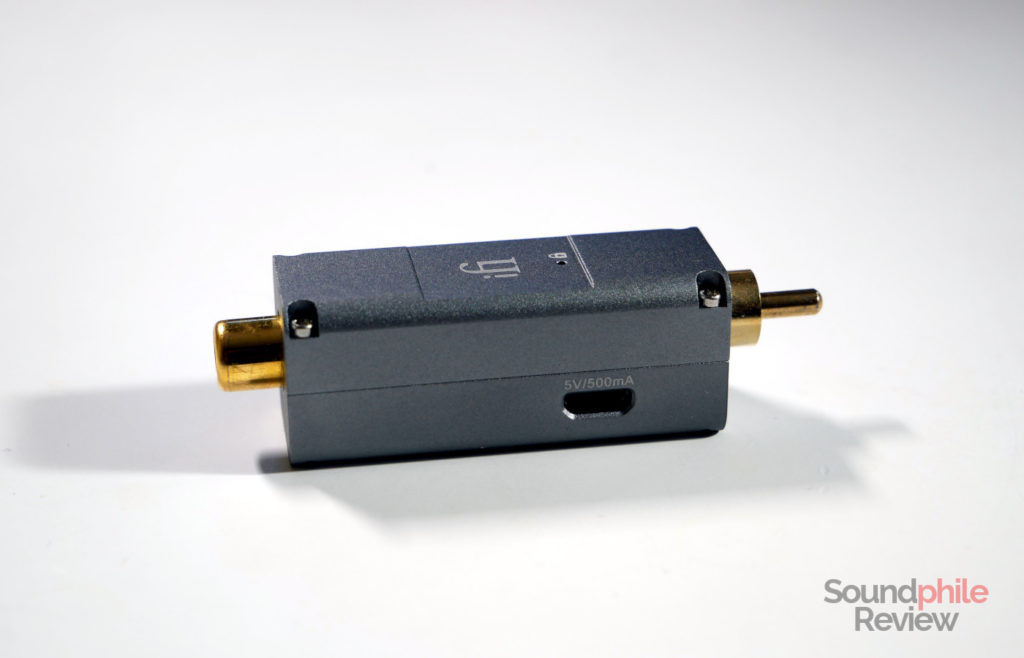 Let’s get one thing off the table straight away. Theory says that a digital signal is much more simple than an analogue one: it’s either one or zero. It’s actually a healthy bit more complicated than that, but if there is any interference between the source and the receiving device that disrupts the signal constantly and continuously, one should be able to hear that something is not working correctly: usually you hear the music stutter or stop completely. The digital domain is relatively simple in that you won’t hear something differently; it’s binary even in outcome: you either hear music or you don’t. There’s no “music is better” or “music is worse”: if you do hear anything, that’s what you should hear. This means that a device such as the iFi SPDIF iPurifier will not make your music “better”, it won’t allow you to magically change your music and introduce you to some mystical experience like you’ve never heard before. If someone tells you that’s possible, they are either lying or ignorant.

There might be issues such as jitter in your system, but unless it’s of cosmic proportions you won’t even realise it’s there. Jitter may cause the highest and lowest frequencies to have some distortions (though whether they’re audible remains to be seen… well, heard) and it could reduce dynamic range. Again, though, it remains to be seen whether this is relevant, as many people cannot tell between 8 bit and 16 bit dynamic ranges, much less between minor differences such as 16 bit and 14 bit (which is a typical scenario.

Having all this preamble out of the way, then what does the iFi SPDIF iPurifier actually do? It is a “re-clocker”. What it does is to take the input signal and align it with a newly-generated clock signal, which is supposedly more accurate and consistent. A “Global Master Timing” clock generator with a precision below 300 femtoseconds (1 millionth of a billionth of a second, 10^-15) takes care of that together with a buffer. This does in fact work because the device takes a few chunks of the incoming signal, calculates the average clock and then “re-clocks” the signal to this average clock, therefore granting consistency to the chunks of data. There’s also galvanic isolation at play: circuits are isolated so that stray currents can’t form and create noise. The effect is to remove jitter and therefore possible distortions.

This is a bit oversimplified, but it should be enough to understand the idea. Does it work? Let’s find out.

I used my Topping DX7 as the source device feeding a Topping D30, which in turn fed a Venture Electronics RunAbout 2.0bl. The reason is the following: my Topping DX7 has noisy headphone and RCA output for some reason, so it seems like there is some kind of electrical interference going on. This seems like the ideal setup for the iFi SPDIF iPurifier: what better test bed then to see if it works?

The thing with jitter is that it is incredibly hard to hear it, unless it is of large proportion. You can definitely measure it when it’s present, but our human ears are not measuring equipment and can’t always tell the difference between two signals, even when those are apparent when measuring them.

That’s true in my case: I was not subjectively able to hear any significant difference. If anything changed, it was so minuscule I could not hear it. I could not effectively distinguish between the music playing with the SPDIF iPurifier being plugged in and without it. Music I played (mainly jazz: Roberto Olzer, Snarky Puppy, Gaia Cuatro) sounded exactly the same to my ears.

I won’t claim that to be always the case. In some conditions you may hear differences, it’s just that I was not able to tell them. In the average case, you can take my experience as an indication of what you can expect: again, not some magical improvement of sound, but some possible removal of noise or, in the most extreme cases, some more detail in the highest frequencies (which most people don’t hear anyway).

The iFi SPDIF iPurifier promises to remove jitter from your SPDIF signal, and as far as I know it does. Does it matter, though? That’s another story. In my subjective listening tests I was not able to tell when the SPDIF iPurifier was plugged in and when it was not. Again, in some cases a device like this may bring some improvement to the music, but I don’t think people would need it unless they have some serious issues with electrical or electromagnetic interference. I was actually really curious to see whether it made any difference, but in my case it didn’t and I feel comfortable in saying that it probably won’t in most cases.