The Hyland Saturn One is a custom-made, artisanal headphone made in the United Kingdom – just outside of London – by expert crafter Alex Hyland and his business, Hyland Headphones. The headphones are built with a certain reference to Grado, but that’s only aesthetics: the sound is pleasantly balanced and very well crafted, just as one would expect from artisanal headphones. The few rough edges are worth dealing with.

Disclaimer: Alex kindly loaned me this unit for more than two weeks in order to write this review. He sells the Saturn One on his company’s website at £350 with free delivery worldwide.

The unit that was lent to me came in a wooden box with a lot of padding. Just like the headphones, the box too is hand-finished. There is room for the headphones themselves, the detachable cable and a fabric carrying bag. The box is fairly large, but so are the headphones due to the padding of the earcups. 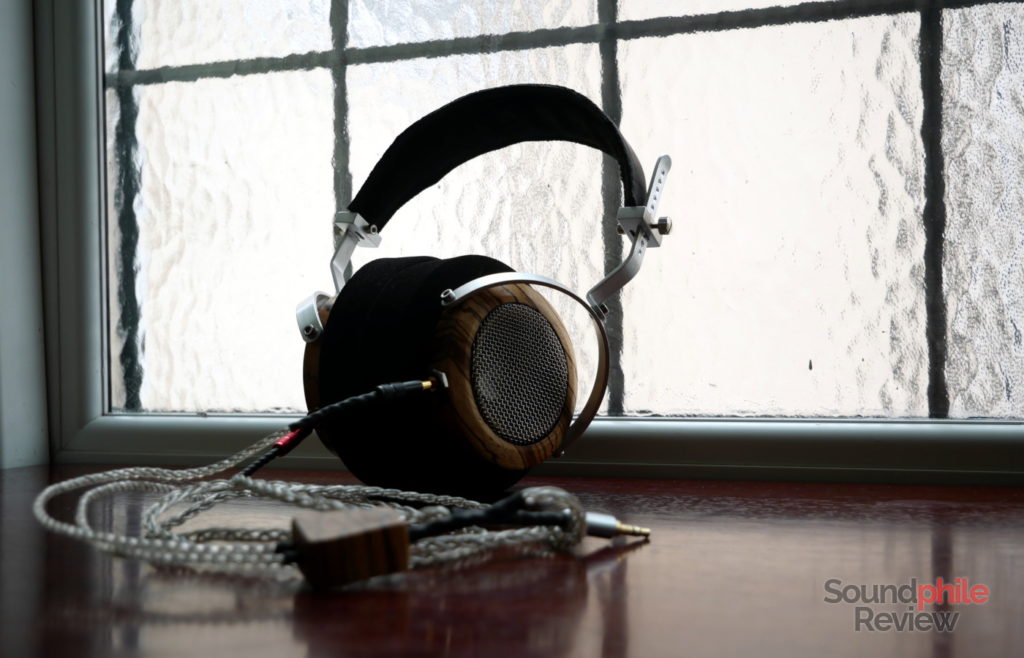 The Saturn One were born after experimenting with modifications of Grado headphones, and it shows in their final design. Although it is in fact original, the design is reminiscent of that of Grado products, with a simple headband and wooden cups with big foam padding. The cups are rather large and the foam padding is large enough to encircle the whole ear; the conical shape allows it not to touch the pinnae directly. The Hyland Saturn One are open back headphones and they feature a metal grille on the exterior of the cups. 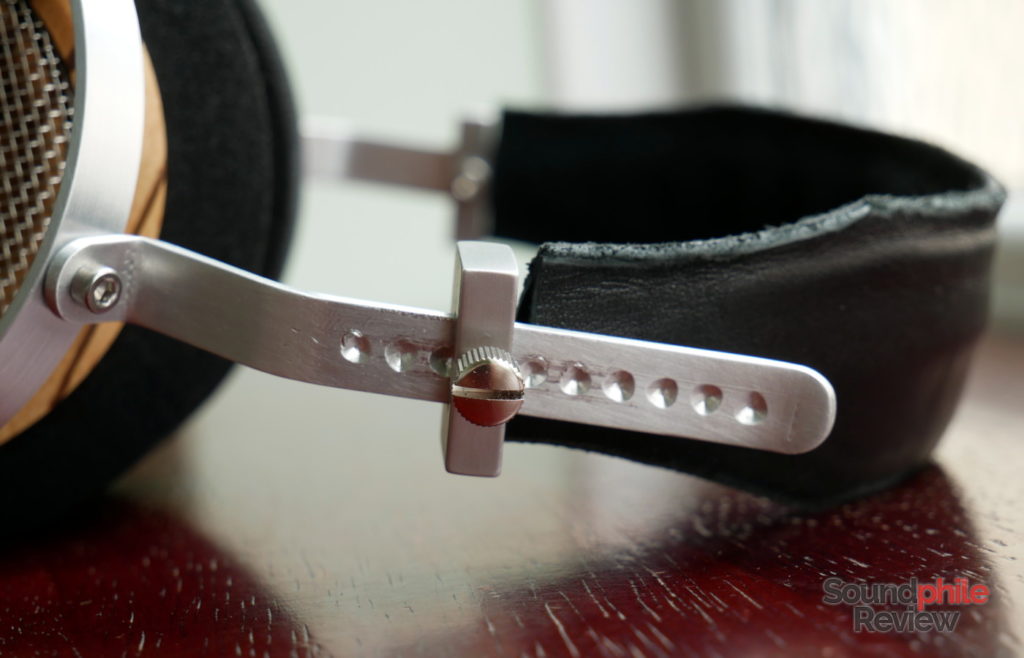 The cups and the headband are connected through a gimbal to which the headband is attached. There is a system of holes drilled in the gimbals that allows one to move the headband according to the size of the head. 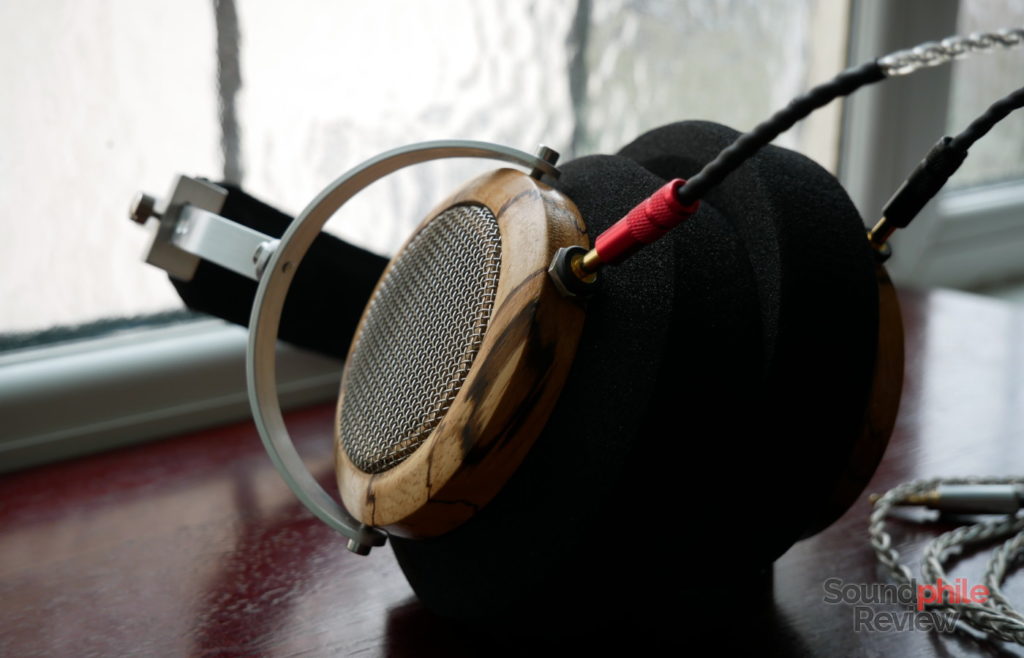 The cups are made of solid wood which is cut and carved to shape. The wood is reclaimed, as is the leather of the headband, so we might say that the Saturn One are ecological and locally sourced on top of being handmade. Although the materials are reclaimed, build quality is superb and the headphones appear solid and well put together. It has to be noted that the use of reclaimed materials depends on their availability in the first place, so the company may resort to using new materials if they run out of reclaimed ones. They commit to using ethically-sourced materials, anyway, which is a choice I fully support. 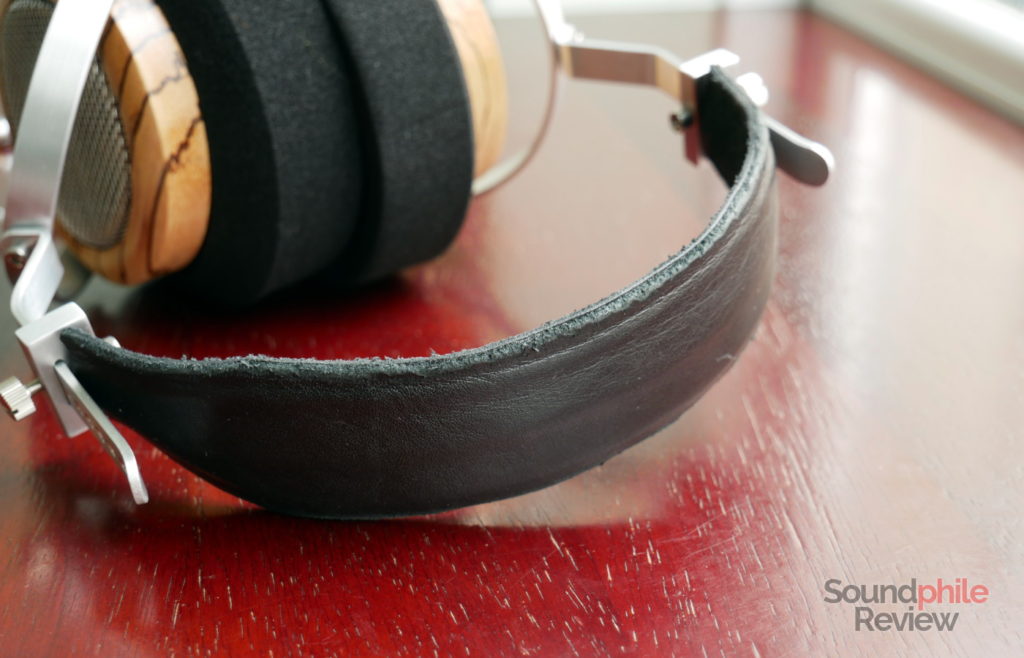 The headband is made covering a stainless steel band with felt and leather. Comfort is affected by this, as people with sensitive scalp like me could find the Hyland Saturn One a bit uncomfortable over longer listening sessions. “Normal” people may however find the Hyland Saturn One perfectly comfortable as they are incredibly light. In fact, with just a bit more padding the Saturn One could be among the most comfortable headphones on the market right now, as the cups go around the ears without pressing on the pinnae and without ever feeling hot. Of course that’s my personal experience, and it also stems from trying other headphones that press against your ears much more (e.g. HiFiMan HE-560), so your mileage may vary. 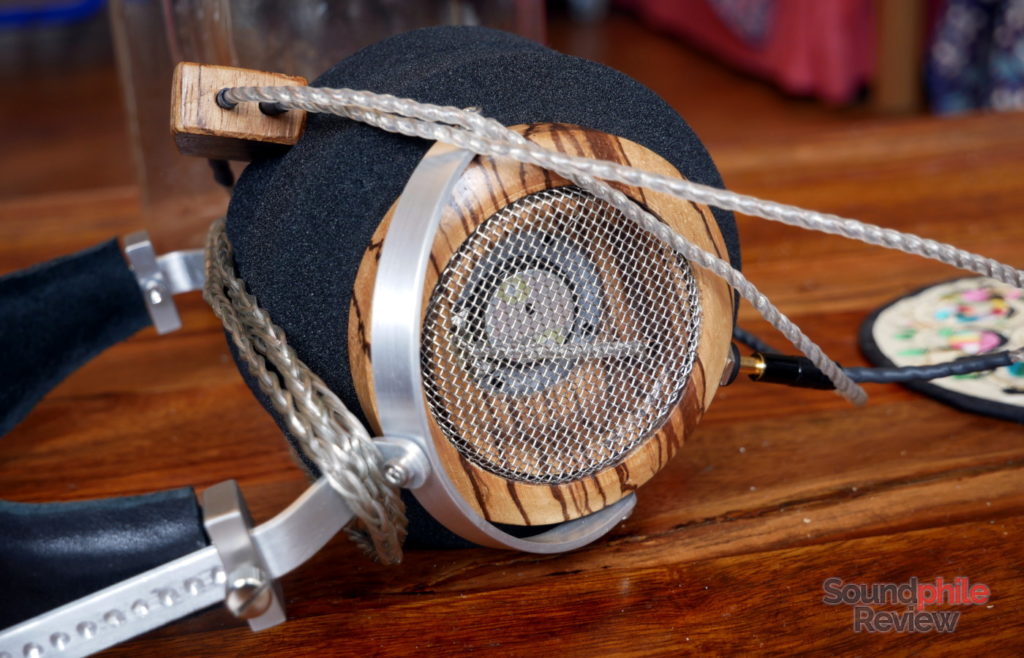 Being open-back headphones, the Hyland Saturn One offer no isolation whatsoever. What’s interesting is the fact that they leak a whole lot of sound, too, more so than any other open-back headphone I’ve ever tried. Even listening at moderate volume makes the sound audible in a good range around the wearer. The Saturn One are definitely not suitable for places where respecting others’ private space is essential (offices, public libraries…). They’re strictly for listening at home or in another private space. I don’t see this as an issue, as it is quite in line with the personal nature of headphones and the audiophile’s need to concentrate on sound – those two things together would be at odds with a public, shared space. 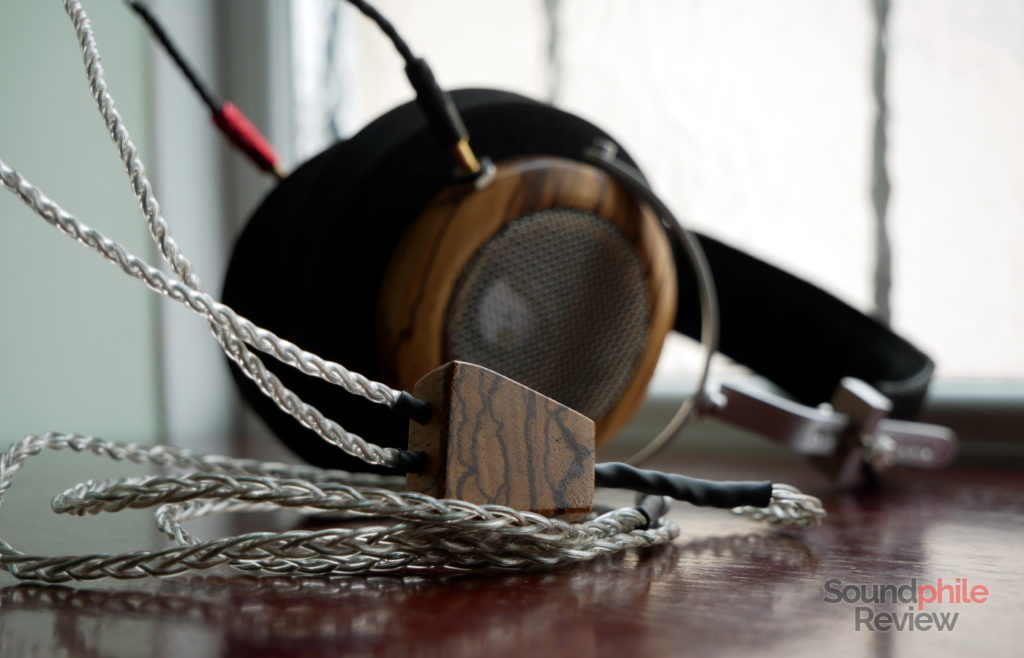 The four-cores cable is pretty stiff – it’s certainly nowhere near the softness of the Yinyoo 8-core SPC cable, just to name an example, or the stock cable that comes with the Sennheiser HD 650. It’s a very good cable, though: it’s made of four individual cores that are rather large, and therefore rather robust. That’s also because of the transparent plastic sleeving, that appears to be quite thick and resistant. Each end is covered with abundant shrink wrap that also acts as a strain relief to avoid any damage to the cable in case of bending.

As I was not home when I wrote this review, I had to use my portable equipment to test the Hyland Saturn One. I used an xDuoo X10T II with an RHA Dacamp L1 and an iFi xCAN, plus an Audirect Beam I connected to my PC.

Although they are 32 Ω, the Hyland One like the added power granted by an amplifier. Using a dedicated amplifier such as the RHA Dacamp L1 or the iFi xCAN I could clearly see how the headphones need power as I had to raise the volume a bit in order to get the sound right and to squeeze enough volume out of the headphones for the music to be immersive. Although some DAPs might have enough power to drive them correctly, I would say that this is one of those cases where using an amplifier is recommended.

Before going on with the analysis of the Hyland Saturn One from an acoustic standpoint, please note that the wood the earcups are made of influences the way the headphones sound. The ones I tried are, as mentioned above, made of zebrano wood. Other woods may sound different – I actually expect them to sound different, so keep that in mind. If you plan on ordering one, you may want to ask Alex for advice on the different properties of the woods they have available to build your pair.

The Hyland Saturn One has a U-shaped sound signature with deep and powerful lows and present treble that encase slightly recessed mids. Bass is however more present than treble, so often the signature is more like an L.

The soundstage is huge. It really came as an unexpected treat, but the Hyland Saturn One can really sound large. That’s the case when listening to Snarky Puppy’s wonderful album Sylva, which sounds like the band and orchestra are playing in a very large room that’s both wide and deep. Imaging is superb as one can always point to instruments accurately, be it in terms of width or in terms of depth. Instrument separation is superb and I actually heard instruments in a way no other headphones I tried were able to display as openly – I’m thinking of guitar lines in Led Zeppelin’s Rock and Roll, a track I’ve been listening to for almost 15 years now, which has guitar lines in the background I never heard this clear before.

The bass on the Hyland Saturn One is deep and bold. It’s not overbearing, but it sits on the edge of over-presence when there’s already a lot of bass in the track as it is emphasised. On the other hand, it can be quite enveloping and fun, especially if you are into electronic music. It’s also really deep, in fact much deeper than I expected it to be: it reaches down to 30 Hz with ease and this depth is noticeable (and likeable) with tracks such as Angel by Massive Attack or Cobalt by H.U.V.A. Network. It really is rumbling and I could feel the depth and energy on a physical level – which is quite a feat. Bass also packs quite a punch as it is not only powerful, but fast too, so transients are felt. It’s almost aggressive in its sheer force, but this also helps it deliver a lot of impact. While it is not incredibly detailed, this speed allows it to portray different instruments playing at the same time with a good enough level of detail.

Midrange is a bit recessed, but otherwise pleasantly tuned and offering a very detailed listening experience. There is just one issue with tuning, and that is a peak in the upper midrange. That is especially noticeable when trumpets and other high-pitched instruments are playing. A good example is Tio Macaco by Snarky Puppy (from the magnificent We Like It Here album), which has the cymbals that are a bit too forward. That peculiar tuning can also be very good for the sound, though, as tracks such as Grown Folks by Snarky Puppy (yeah, I always play that. It’s one of my favourite tracks!) sound really good due to the emphasis on brass instruments that sound more lively. There’s a lot of details in the midrange space, so you can really hear the nuances and the smaller details in the track – be it the pick on the guitar’s strings or the fingers tapping the keys on a brass instrument. Speed is also very good, as testified by the sticks at the beginning of Grown Folks – the sound is really accurate in terms of decay, so it sounds immediate as it sounds in reality.

Treble presence is concentrated in the lower part of the range, with a good roll-off that makes higher parts of the spectrum weigh in with the correct presence. As a result, treble appears to be mostly concentrated in the lower area, and therefore a bit “warm”, but the extension allows it to display a very good amount of detail and give instruments some depth. By that I mean that brushes on cymbals sound like they make a variety of sounds in a wide space, instead of a point-like source making a restricted set of individual sounds – it sounds consistent.

As I reviewed the Hyland Saturn One while away from home, I had no access to my headphones to make comparisons. I could write something based on my memory, but research has proven that our brain is really not good at remembering the volume of sounds and it would therefore be a worthless comparison. I prefer not to provide any comparison at all than to write something that would be completely inaccurate and maybe even misleading.

The Hyland Saturn One may be the first headphones manufactured by the startup, Hyland Headphones, but they aim for the stars and they can reach them. While their tuning is not exactly reference, at least in the wood I tried, they are extremely capable from a technical standpoint and offer the listener a unique view into the sound. They are definitely worth their price just for how they sound, let alone the fact that they are built by hand in the UK.

I found the Hyland Saturn One to only have few flaws, and they’re mostly easily addressable. They are probably the most surprising product I’ve tried in the last year – they’re quite a revelation and a proof of their manufacturer’s ability. Brilliant.

KEF LSX review: it’s all there