The Yinyoo IN8 is a cheap in-ear headphone built using one balanced armature and one dynamic driver, in a classic hybrid configuration. These earphones leverage their cheap retail price as the main selling point, together with the use of aluminium housings and a smartphone-compatible remote.

Disclaimer: a free sample was provided by AK Audio. Using the code “SoundphileReview” during checkout brings the price down to $20. To use the code, you have to write it in the message form and select “other payment”, then wait for AK Audio to manually adjust the price for you (you will receive an email when it’s done). 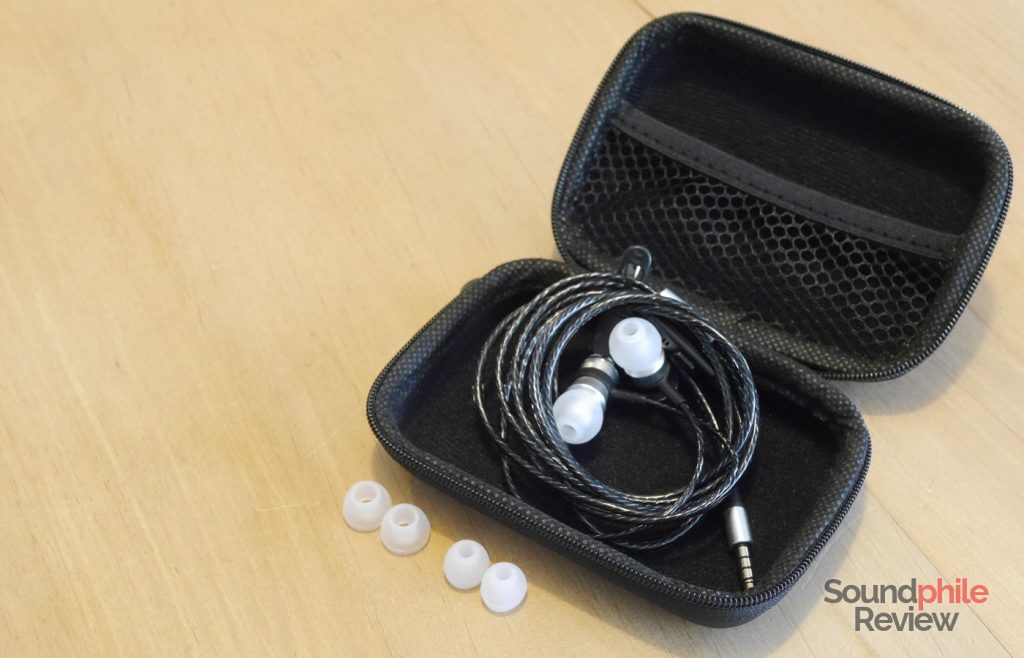 The box comes with the earphones, a plastic clip, three different sets of eartips and a hard carrying case. It’s a fairly complete set given the price of the Yinyoo IN8.

The shape of the housings reminds me that of the Meze 11 Neo, which stand out from the crowd for their somewhat-premium appearance. This last bit does not apply to the Yinyoo IN8, though, as the use of shiny plastic and a glossy cable make them look a bit cheap. They’re anonymous enough when it comes to appearance; the only distinctive thing is the “flap” on the back of the housings, where the Yinyoo logo resides.

The housings are made of aluminium, as the remote on the cable, but everything else is made of cheap-looking plastic. The strain reliefs are made of plastic, too, though it is a bit flexible so as to allow them to bend. All in all, build quality is acceptable and in line with what can be expected from ~$25 headphones. 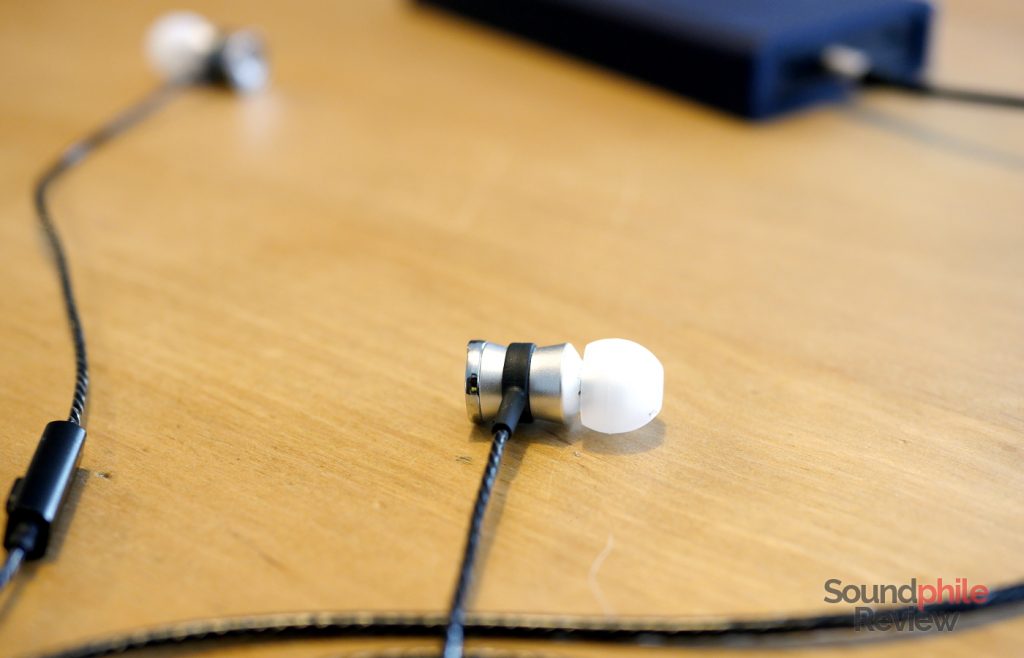 The cable is covered in shiny, rubbery plastic, which has a black colour with a silver line running from end to end. It seems to be resistant enough, but it’s also prone to coiling. While it’s not really stiff, it often gets in the way because of its tendency to coil. What’s more, it has a lot of microphonics, so running it under the dresses (i.e. under a jacket or sweater) is of essence to avoid a constant thumping noise. I found that running the cable behind my ears can reduce the impact of microphonics, though using the clip is often necessary anyway. 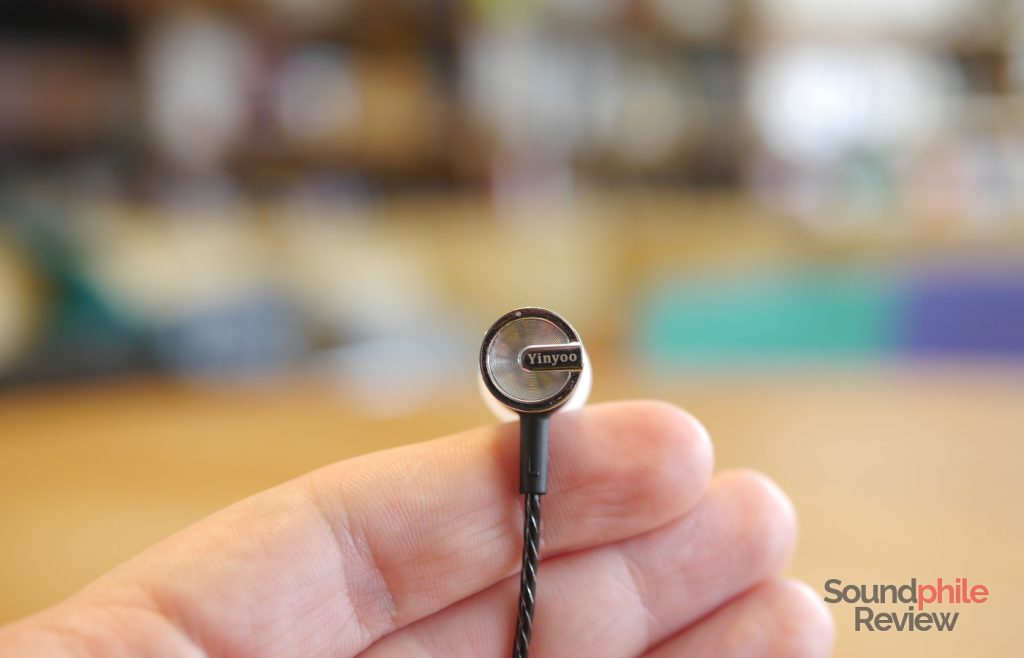 As for comfort, the Yinyoo IN8 is discretely comfortable, thanks to a relatively small size that makes it easy to fit in the ear. The absence of clear-cut edges (I’m looking at you, KZ ZS6) also helps it being comfortable for longer listening sessions.

Isolation is definitely not one of the main selling points for the Yinyoo IN8. While there is an attenuation of ambient noise, it’s slight and not on par with other in-ear headphones (i.e. RHA T20i). It can deal with light noise, but it probably won’t be sufficient for public transport and other noisy situations.

The microphone offers sufficient performance when used in quiet environments; if ambient noise is present, it is not able to capture the voice with sufficient quality to allow for a clear conversation. 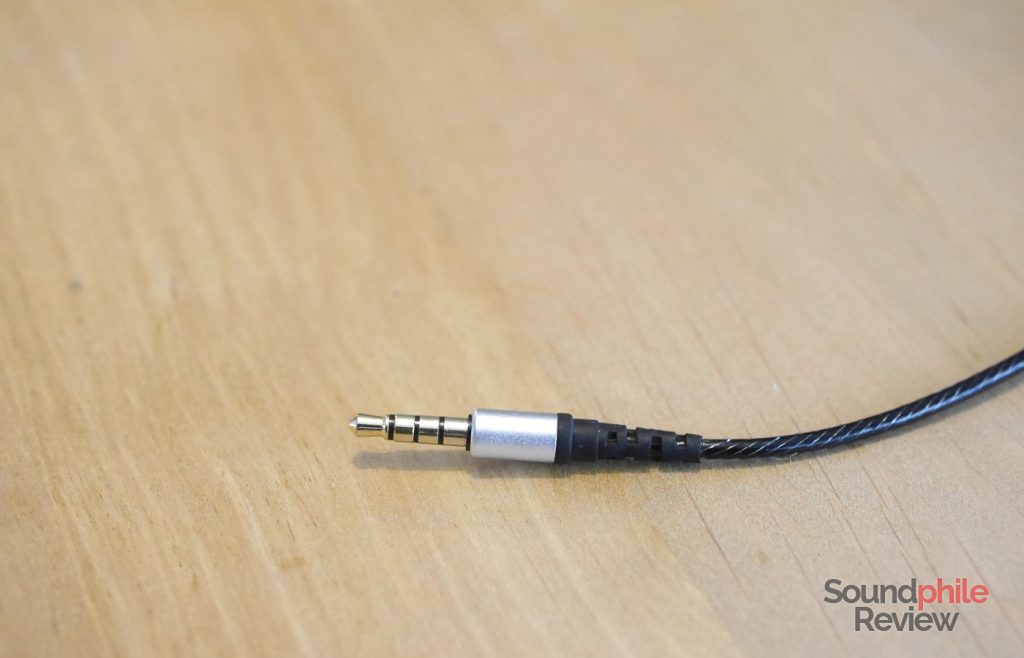 I ran a 100-hour burn-in on the Yinyoo IN8 before testing it. I then used various sources: a FiiO X3 III, an Aune M1s, a Topping DX7, a Head ‘n’ Hifi Objective2 and an iFi micro iCAN SE fed by a Topping D30, and my Lenovo K3 Note smartphone. I used a pair of Comply Isolation tips during the tests (see my best eartips article for additional information).

When it comes to sound, the Yinyoo IN8 sound warm and not too detailed, with a bump in mid lows. This emphasis makes the sound appear bloated as a whole and unsuited to correctly render all genres. It’s generally flat, as it is a bit dull and not really lively.

Soundstage is limited and very close to the listener; this gives a sense of engagement and intimacy to modern music recordings (which don’t have a huge soundstage to begin with) and may be appealing for certain genres, but it limits the overall ability of the Yinyoo IN8 to reproduce multiple genres.

Despite the overpowering lows, instrument separation is still decent, though nothing more. The RHA MA650a and the Xiaomi Mi In-Ear Headphones Pro, just to name a couple names, have way better separation.

While the Yinyoo IN8 have a strong low-end, it is not that good. In fact bass is not well-controlled, thus it lacks detail and texture. It’s a fill that doesn’t do much more than providing the sound with body and thump. In fact it’s a bit overwhelming and it overtakes the lower mids on a few occasions. It’s bold and powerful and it overcharges the music; it is mostly concentrated in upper lows and lower mids, with the classic Beats-like bloat. Listening to songs such as Korn’s Play Me, which is bass-heavy by itself, results in an explosion of lows that envelops you. That’s actually pretty good for entertainment and fun, but not for fidelity.

Using an equalizer and cutting the lower frequencies by ~4 dB yields better results, with sound becoming more balanced and natural. I personally do not recommend buying headphones because of how they sound when using an equalizer, though, as that is not their true sound.

Mids are slightly recessed and suffer from the excessive presence of bass, but have an otherwise energetic presence – aided by a small spike in the upper midrange – that makes them noticeable despite the bump in lows. Detail retrieval is basic and doesn’t allow for too many nuances to be portrayed, so I wouldn’t call the midrange “articulate” nor “transparent”. Its presentation is otherwise good, as they are natural enough in terms of tonality.

Treble is left a bit in the background, even though it’s got a good timbre and discrete extension. The level of detail is not extreme and it won’t blow your socks off, but it’s pretty decent for a $25 earphone. Being highs behind mids and lows, however, they’re often not that easy to hear in congested songs and this makes them contribute less to the overall tonality.

Given their bass boost, the Yinyoo IN8 excel in those genres where strong bass presence is a good thing – think electronica, nu metal, hip-hop, etc. My personal preference is against using them for genres such as jazz, classical, classic rock, blues and other mostly acoustic genres, but it all depends on one’s taste.

I compared them to a few headphones that are in the same price bracket:

The Yinyoo IN8 are decent, but they cater to an audience who likes big, bold lows and is not afraid of some spills in the midrange. It may be worth checking these out if heavily coloured, fun sound is your aim. Bassheads and people wishing for a bump in bass would find them pleasing. I also found them pleasant when gaming – explosions have that boomy sound that’s just perfect, though it’s not going to blow you away (puns intended).

Considering their sub-$25 price, they’re not half bad as bass-heavy earphones. They’ve got character and work well with modern genres and games, which is great for young people. Good build quality also makes them more attractive. Should you buy them? They’re a good alternative to other bass-heavy in-ear headphones out there, but don’t buy them expecting to change this inclination.

The Yinyoo IN8 have a $23 price tag as of this review’s publication.