The famous saying “good artists copy, great artists steal” is attributed to Picasso (and famously stolen by Steve Jobs), and there seems to be some truth to it. The Yinyoo V2 is a clone of the Tin Audio T2, at least aesthetically, as they thought that stealing the looks of a successful product would be a good idea. I disagree, but the design is in fact great (the T2 was, too, to begin with), but the Yinyoo V2 would have been an interesting product even without aping someone else’s work.

Disclaimer: this sample comes from AK Audio, who sent it free of charge. They sell the earphones at $49 on AliExpress. 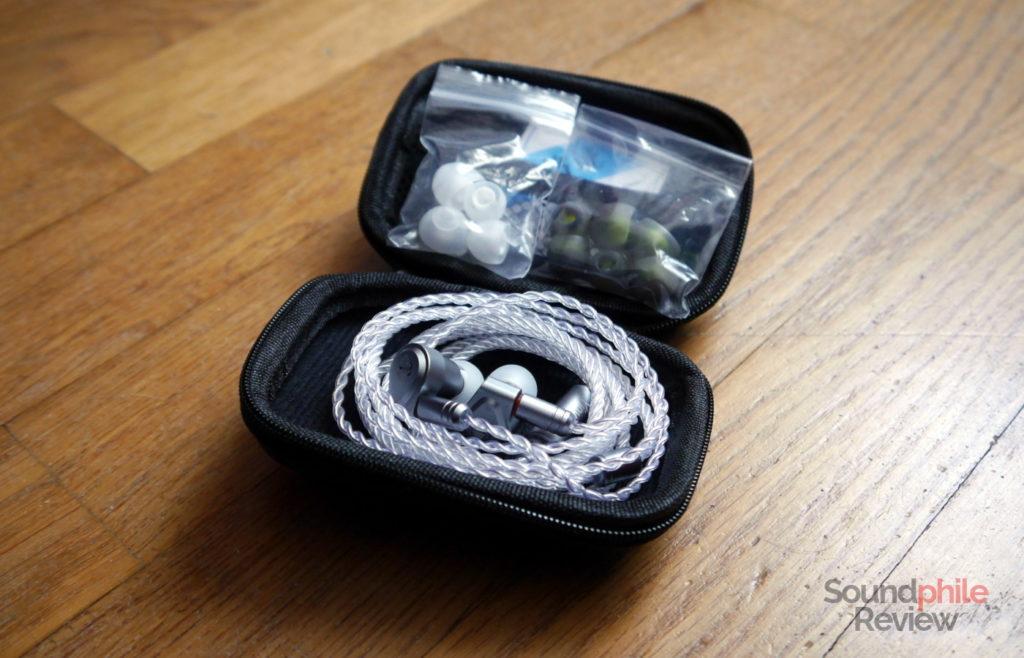 The Yinyoo V2 come with a fairly complete accessory set: the box holds the earpieces, a cable with a 3.5 mm jack on one end and 2-pin connectors on the othe others, two sets of three silicone eartips each and a hard carrying case. Considering the price point these sell at, it is a great accessory set. 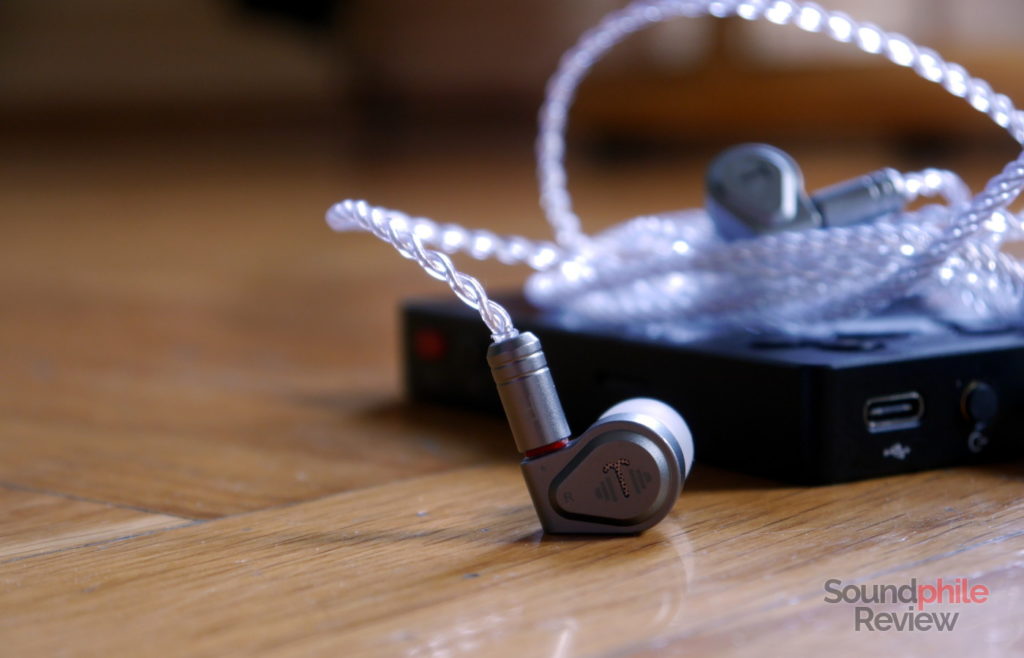 There is no way around the fact that the Yinyoo V2 is a carbon copy of the Tin Audio T2. And there’s no excuse for that. Even the name mimics that of the competitor and that’s apparent, as there is no Yinyoo V1 (while there is in fact a Tin Audio T1). The same cylindrical shape with a protrusion that holds the cable connector is used.

Luckily, this is not a blind copy of the original: there are a few differences such as the Yinyoo logo on the faceplates (which is also used to hide a grille), the use of 2-pin connectors instead of the MMCX ones and markings that indicate the channel on both the shell and the cable. That last detail is an important one, as it makes it clear what earpiece one should use for what channel, instead of leaving one with the doubt. 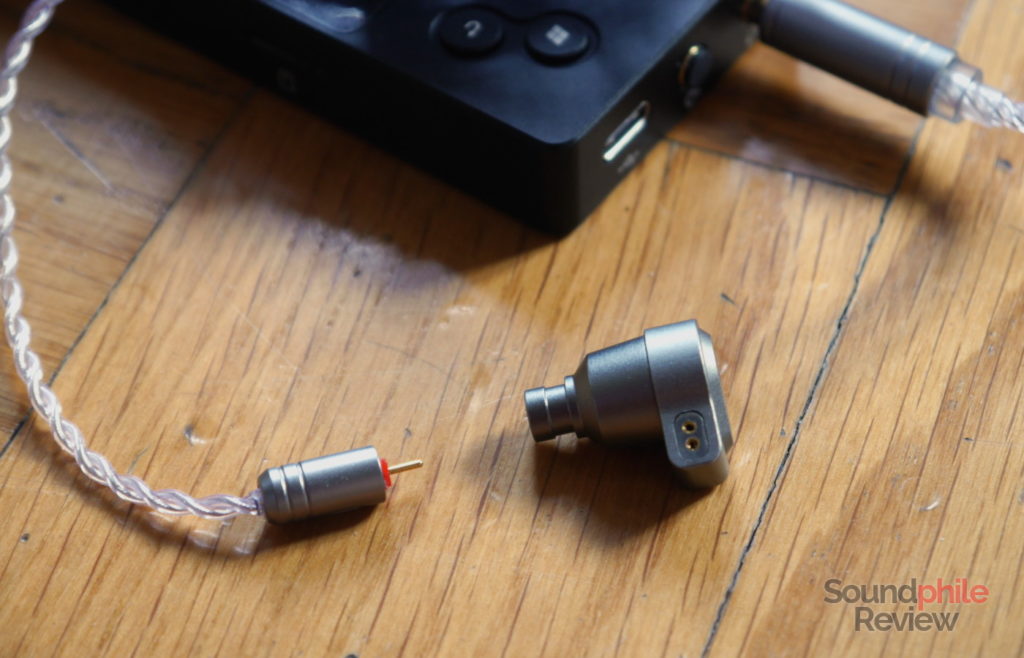 From the perspective of build quality, Yinyoo does not deliver any disappointments: the earpieces are well assembled with quality materials. The only gripe is the inconsistencies in labelling on the cable: on the left side the marking is on the inside, on the right side it is on the outside. Whether this is due to bad design or bad quality control, this should not happen.

The Yinyoo V2 are small and light, and their shape fits most ears with ease. This is why I find them so comfortable. I can use them for a couple of hours without feeling they are in my ears, which is quite good – using them for four hours straight is not something out of a science fiction novel. Yinyoo got comfort quite right and that’s no surprise, considering the T2 are very comfortable.

The Yinyoo V2 are usable while being on the move, but they don’t offer much isolation. Using them on busy streets or on public transport won’t shield you from sounds coming from outside and, on the contrary, you will hear them almost as if you didn’t wear anything. It is therefore not recommended to buy the Yinyoo V2 if use while out and about is the main scenario. 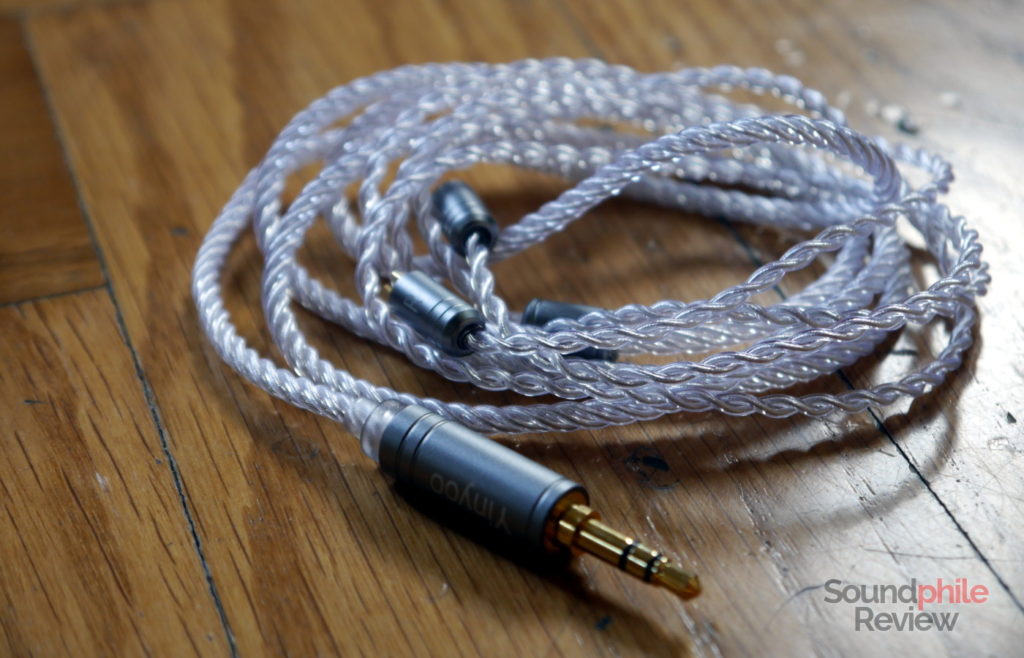 The cable is bright silver, almost white, and made with four cores that are then split into two groups of two. Each core is individually sleeved with transparent plastic with a blueish tone that is relatively soft. All of the junction boxes (i.e. jack, Y-split, earphone connector) are made of aluminium. The cable as a whole is well-made enough, with good softness and seemingly good resistance; it does not seem as strong as aftermarket cables such as the Yinyoo brown 8-core silver plated cable, but that’s to be expected given those cables cost half as much as the whole set. It’s still less flimsy than the stock T2 cable, though,.

The Yinyoo V2 was used in conjunction with a few sources such as the xDuoo X3-II (pictured above), the RHA Dacamp L1 and the Audirect Beam. Most source files were FLACs in standard resolution. No break-in period was applied, although the earphones had been used for at least 40 hours before I wrote this review.

The Yinyoo V2 imitates the Tin Audio T2 only from an aesthetic perspective. Sound is a completely different story, as it follows the classic V-shaped curve that is so widely adopted nowadays in consumer-oriented products. In a sense, the V2 and the T2 are sonically opposite: the latter aims for neutrality, the former aims for heavy colouration to make the sound more fun. It then depends on one’s taste to choose the favourite approach to tuning.

The Yinyoo V2 are not too far from the average when it comes to technical ability. Despite being almost open-back, the V2 do not have too wide of a soundstage. It is in fact slightly larger than the average in their price range, but it still appears closer than that of the T2 or of other large-sounding IEMs. I would say that imaging is where the V2 are the least capable, as it never makes instrument sound like they’re coming from a specific direction if it’s not clear-cut left/centre/right. Instrument separation, on the other hand, is quite good and the V2 can make even crowded tracks (e.g. Porcupine Tree’s Prodigal) sound quite clear and make it easy to pick single instruments.

The Yinyoo V2 opts for a bass presentation that extends decently deep but is centred in the mid-bass region. It’s the latter that has the most emphasis and gives the sound a warm/dark dressing. Bass is in fact prominent, although it is controlled so it does not leak over the mids. This does not alter the fact that it as a “in-your-face” presentation that displays it on top of the rest. Quantity is accompanied by quality, though: as I already mentioned, control is good and this results in multiple bass lines playing together and being distinguishable, and in details being displayed clearly enough. There’s no flabbiness or bloat, so the whole low end appears as rich and textured.

It has to be expected that the midrange is recessed, considering the “V” shape of the frequency response, but it is actually not too much recessed and is therefore well placed in the mix. Truth be told, I am not too much of a fan of V-shaped tunings exactly because of the recession of mids, but the V2 is done in a way that appeals to people like me who like their mids to be front and centre. One thing’s for sure and that’s they are warm: as the midrange begins right where bass stops, it is no wonder that the lower part is more emphasised given the emphasis on bass! That is not subtle, either, but the general presentation is still balanced. Detail is – again – not too far off the average, so this fact coupled with the tuning makes midrange sound not vivid and lively, but a bit dampened and almost dull.

Although the signature is indeed V-shaped, treble is not as prominent as bass. While it is indeed emphasised, it is still tame and not too much over the midrange. This presentation does not display a deeply detailed and sophisticated upper end, though: the driver is not able to convey too much detail and, on the contrary, treble lacks those finer micro-details such as the brush strokes on the cymbals in jazz recordings (e.g. in Roberto Olzer’s Die Irren). I don’t mean that detail is bad, though: there is enough of it to let one have a clear idea of what’s going on, but the lack of the finer details and the relatively poor extension make the treble lack presence in the mix and air. It feels a bit congested, as if it was not fully present. There’s good presence only in the lower area, and this makes it often difficult to get the full picture – this tuning is not for those looking for details in this area, but it may be appealing to those who wish for a laid-back treble response.

As for the genres the Yinyoo V2 can render best, I would say that they are fairly good all-rounders with the only caveat being midrange, as genres that require focus on the midrange can be penalised.

Let’s compare the Yinyoo V2 to a few other headphones:

Despite the good intentions of their creators, the Yinyoo V2 are definitely not on par with the Tin Audio T2 they ape. Although they are in fact close to them aesthetically, they are not when it comes to sound. Yes, they may be funnier and have better bass extension, but they are still worse in terms of technical ability.

The original is – as is often the case – still the best, unless one is looking for some additional fun and better bass extension. Those are the only two cases that would make me recommend the Yinyoo V2, as it is otherwise surpassed in attractiveness by other headphones on the market.