The Massdrop x HiFiMAN RE-00 are an inexpensive successor to the critically-acclaimed, yet out-of-production RE-0. Brought back by Massdrop, these in-ear headphones offer a fantastic quality/price ratio. They are very difficult to tame, though: it takes special care to unleash their true potential and they’re not what many people look for due to their neutral response. Nonetheless, they’re bliss in their price range (<50$) and even beyond.

Disclaimer: I bought the Massdrop x HiFiMAN RE-00 with my own money. Neither Massdrop nor HiFiMAN have any ties with this site. More information on Massdrop.

To say the package is bare is somewhat of an understatement. There is nothing more than the earphones and an additional set of eartips. Both sets are made of silicone; one has two flanges, the other has only one. That’s it. 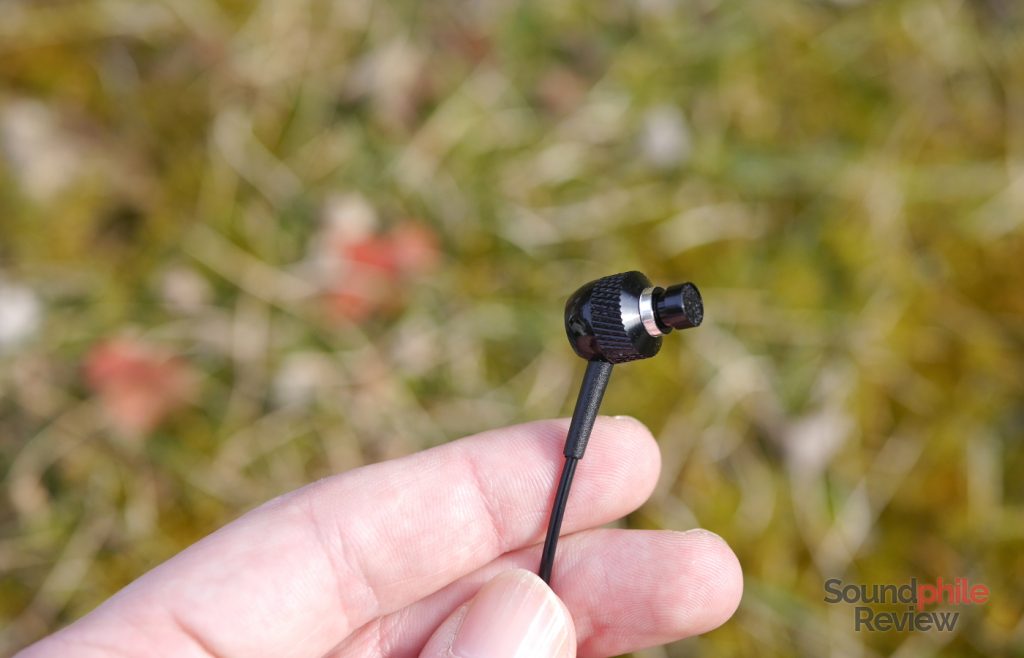 The Massdrop x HiFiMAN RE-00 take a few cues from their predecessors, but end up being radically different. The housing is made of aluminium, with milling on the sides which enhances looks but has a negative impact on comfort; the strain relief is made of bendable plastic. They are totally black with a silver ring on the nozzle.

Many people on Massdrop lamented the fact that their RE-00 got apart after a few weeks of use. I was lucky enough to get a solid unit, but the sheer number of these claims (often with accompanying pictures) is a clear index of quality control issues on HiFiMAN’s part. They’re cheap, but this is no excuse. 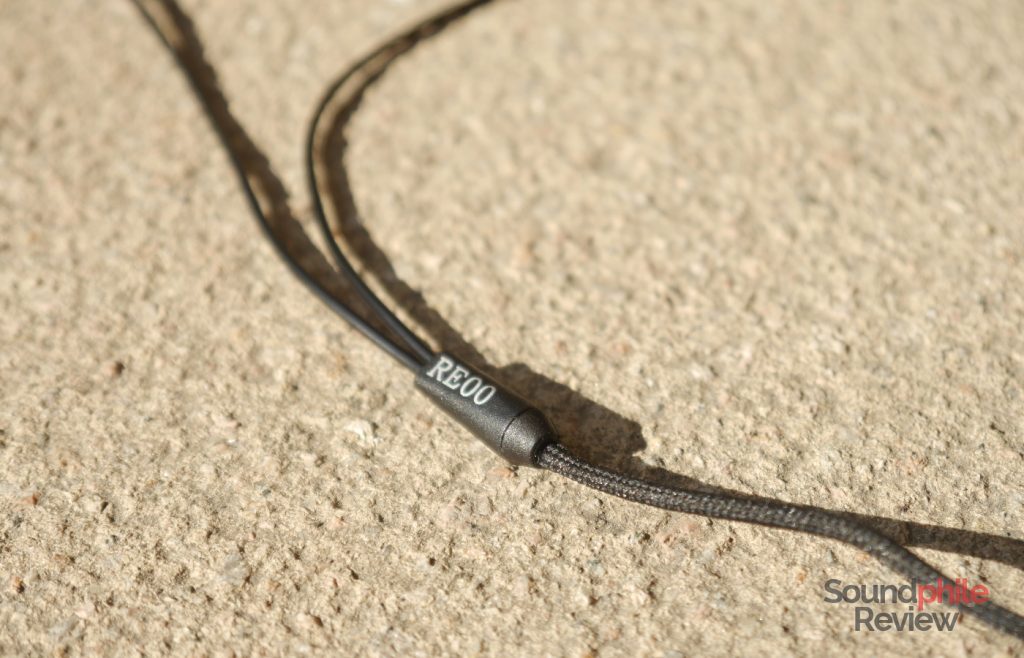 The cord is braided up to the Y split, after which it is covered in plastic. The braided section is stiff enough not to get tangled, but this also adds a good bit of microphonics and makes it prone to kinks. Generally speaking, the cable appears to be high quality. It lacks a chin slider and there is no remote for mobile use – the HiFiMAN RE-00 seem to be targeted at the pure audiophile market. If you are going to use them with a mobile phone, be aware that they do not have a remote, so you’ll need to pick the phone out of your pocket to control music playback and volume. The jack connector has a 90° angle. 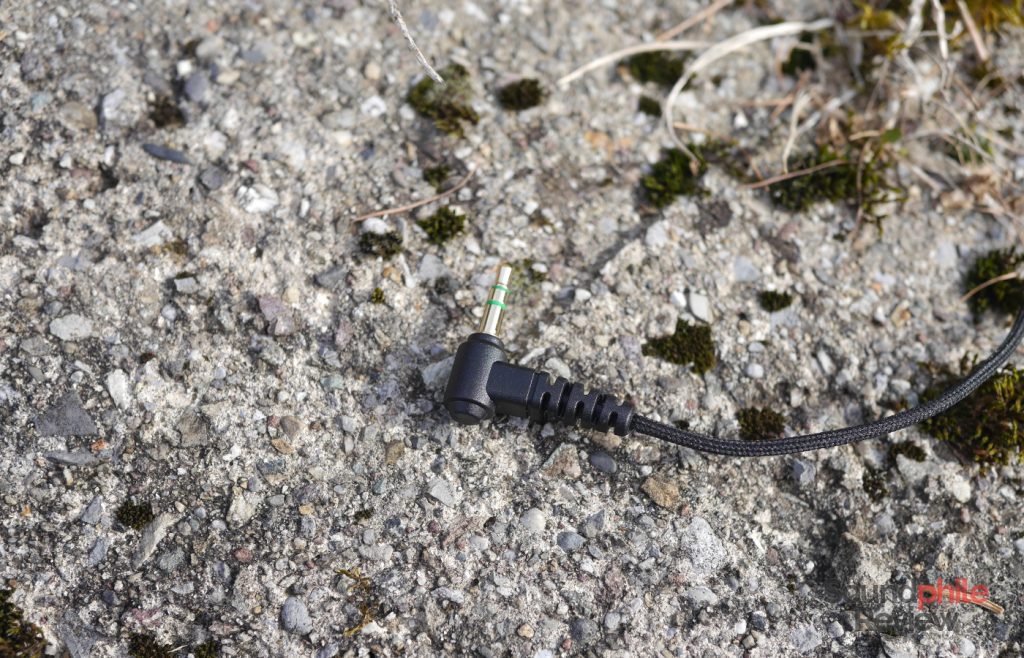 Comfort is good, although imperfect: after about a couple hours of use they start to cause fatigue on the ear because of the protruding shape of the milled decoration. That’s the main – and really the only – complain I can make about it, because they are otherwise very comfortable to wear.

If you are looking for in-ear headphones which provide a lot of isolation, these may not be the best-in-class. It seems I cannot get good isolation with the included earplugs no matter how deep I insert the earphones in my ears: the included double-flanged and single-flanged silicone tips just don’t fit right. Other tips, such as the Comply Isolation foams work fine, though, and I can get enough isolation to be able to use them on the subway. That’s a very personal issue, though, so your mileage may vary. 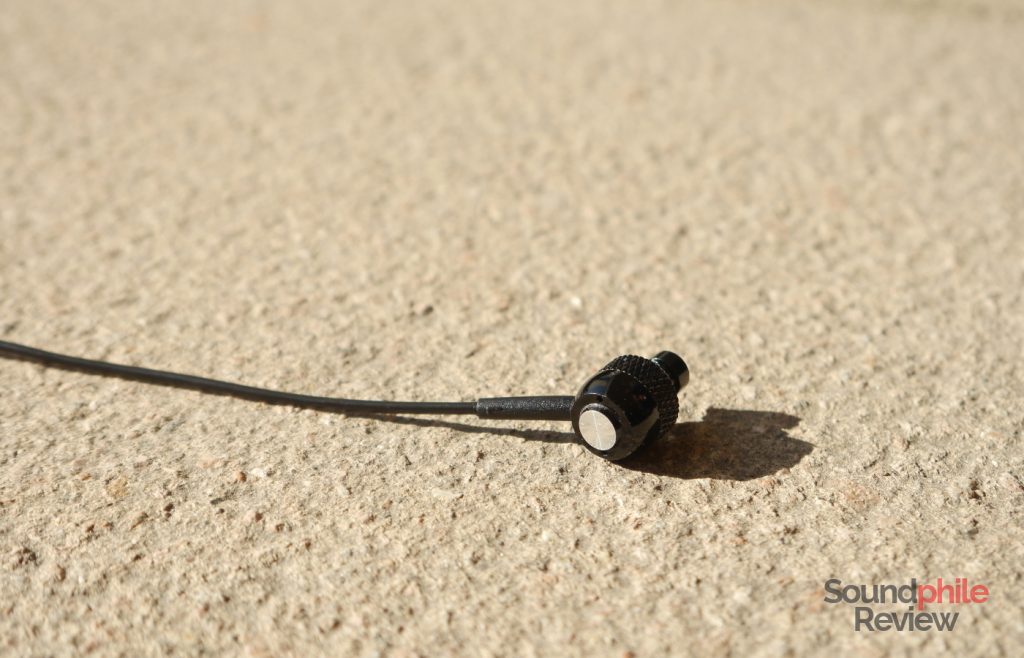 Getting a proper seal is important for bass, too: if I do not insert the HiFiMAN RE-00 deep enough and with a nice seal, bass magically disappears. While this is true for any in-ear headphones, it is particularly noticeable on the RE-00 since their bass is not emphasized (quite the opposite!).

The HiFiMAN RE-00 I got underwent 100 hours of burn in. I used them with both a Lenovo Vibe Shot as a portable player and a Zorloo ZuperDAC or the Topping D30 + Topping A30 stack connected to my desktop PC.

Despite impedance being 64 Ω, the HiFiMAN RE-00 play nice with mobile phones: my Lenovo Vibe Shot powered them without any issues, with a very decent volume output even at moderate levels (usually half the max volume). Using an amplifier, though, unleashes their true potential: bass becomes more incisive and detailed, with better texture and control; midrange comes forward and treble detail improves.

I was surprised by the wide soundstage, which has even a bit of depth. Considering the HiFiMAN RE-00 retail for less than $50, that’s nothing short of impressive. Instrument separation is remarkable: there often is a clear distinction between the various instruments, so it is easy to point them out. Denser tracks such as Angel by Massive Attack will show the limits of the headphones, though, as sound could appear a bit muffled.

Bass is as near to being neutral as can be. But is neutral bass good for musicality? For many listeners, the answer will be a big, fat “no”. That is not only because bass may appear lacking, but also because it is more often than not relegated to the background, even when would expect it to be front and centre. Sometimes it’s even barely audible! Quantity matters aside, what is really important is the fact that bass is accurate, fast and precise. It won’t shake you with large amounts of sub-bass, but it will entertain you with a very nice presentation that includes a fine texture and rapid decay. It’s decently deep and rounded once you find the right positioning of the earphones in your ear. I will dare comparing it to beers: sure everyone likes lager beers such as Heineken or Budweiser, but Belgian Trappist beers are more complex and fine – in the end, one may argue they may be better if one really wants to taste the beer and not just drink it.

It took me some time to grow accustomed to the mids, as they tend to be a bit slow and lack that liveliness I found in other IEMs (i.e. RHA T20i, RHA MA750i). At first they appeared dull and even a bit muffled, but after a bit of time they sound just right – clear enough, detailed and with good balance. They are a bit slow, so they aren’t the best for modern, fast genres, but this may be nit-picking. Although not very strong in the low-mids section, they have good body and there is no overlapping between low-mids and lows. I prefer brighter signatures, but all in all it’s neutral and natural and that’s a huge pro.

Highs are decently detailed and airy, but they’re not where the focus lies and therefore they’re almost relegated in the background. They’re not lacking by any means, but they are not at the forefront either. Detail is decent, but the RE-00 won’t surprise you with extreme detail in treble – you won’t be hearing all the smallest micro-details of a cymbal crash or of a bow on a violin’s strings. There’s a good amount of extensions and sibilance is almost entirely absent. It’s very smooth and pleasant, and it fits almost every genre.

When it comes to genres, the HiFiMAN RE-00 are good for most genres, but I wouldn’t recommend them for dense, modern genres (metal, trance…) or for genres which require strong bass response. They’re great for acoustic genres such as classical, folk, Celtic and rock, and they may be effectively used as monitors given their almost flat frequency response (especially when it comes to bass).

The Xiaomi Mi In-Ear Headphones Pro‘s treble is much more prominent and detailed and bass is deeper, but transient response isn’t as fast and soundstage isn’t as large. Their sound is also coloured, with mids less in the forefront, and instrument separation is not as good in the low-mids. Although the price is similar, the HiFiMAN RE-00 seem to be technically better in many aspects.
The RHA MA750i fare much better, thanks to better balance and better instrument separation and detail retrieval when compared to the RE-00. Treble is also more detailed and present, so the sound appears more vivid. Bass is more prominent, however, and although it goes deeper and has a comparable speed, it still gives the sound a darker appearance than that on the RE-00.
I also listened to the Meze 11 Neo, whose sound is coloured (V-shaped, in fact) and which can be considered more geared towards young people. The differences are evident: their treble is more evident, the bass is stronger (but with comparable depth) and instrument separation is slightly better – especially when it comes to midrange. Transients are not as clean on the Meze, but just by a small margin. They’re very different headphones, and deciding which is best is almost impossible given that they perform similarly but have completely different sound signatures and cater to a different audience.

I think the HiFiMAN RE-00 can’t compete with higher-tiered headphones in terms of build quality, resolution or general sound quality – they’re cheap and it’s easy to hear that. But this doesn’t stop them from sounding incredibly good, not just for the price but in a broader sense.

It seems like HiFiMAN has a few issues with quality control, but those lucky enough to get a good unit find themselves with a great pair of in-ear headphones that costs less than $50 while sounding like it was easily double that price. Were they really double the price I don’t think this review would be too different.

I won’t sugar coat it too much: the HiFiMAN RE-00 are not headphones for everyone, as they lack those entertaining features most people crave. They’re for those who want a sincere, faithful reproduction of sounds. Which they deliver skilfully and affordably.

The HiFiMAN RE-00 can only be purchased on Massdrop at $35 (+$5 for international shipping).

BQEYZ BQ3 review: fun is the name of the game