The Objective2 is maybe Internet’s most famous headphone amplifier. The brainchild of Nwavguy, it is now a few years old but still current, especially because of its objective approach. Its good performance, portable nature, open design and availability from different manufacturers with different options make it a good option for all audiophiles – newbies and veterans alike. The Head ‘n’ HiFi Objective2 is one of the versions out there – one that’s more easily available to European users.

Head ‘n’ HiFi is in fact based in Europe (Germany, to be precise) and is specialised in manufacturing Objective2 amplifiers and their DAC counterparts, the ODAC, also offering a single device that combines the two. This is the Objective2 review, so I will only cover the amplifier part – let’s begin!

Disclaimer: I bought the Head ‘n’ HiFi Objective2 second hand. The manufacturer offers more information on their website and you can purchase the device for €109.99.

Alas I got the device with the power supply and nothing else – the box was not included. 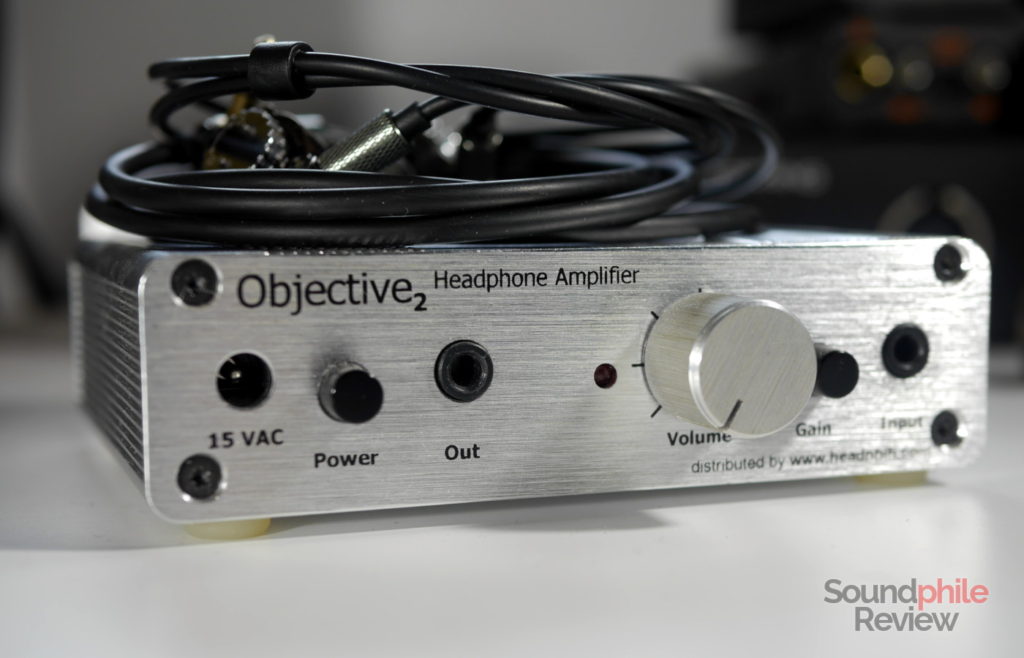 The Head ‘n’ HiFi Objective2 is really simple and down-to-earth with its design. It is a squared slab of metal with no concessions to beauty – form follows function. Its approach is not too dissimilar to the one used on the Topping D30 or Topping A30, though they do indeed offer a bit more on the aesthetics side. The only “decoration” are two sets of milled stripes on the top and on both sides – but that’s it.

Everything is on the front side, which is just a metal plate held in place by four screws. There are a DC input, the power switch, the headphone out jack, a red status LED, the volume knob, a gain switch and the input jack. Every other side is clear, unless you choose a 6.3 mm jack connector which comes with the power connector on the back.

The Objective2 appears to be quite tough and, given the amount of scratches and wear on my unit, it seems to be able to sustain quite a bit of (ab)use without suffering too much from it. The thick metal used for the case seems to help here and the portability of the amplifier is reinforced by that. (I guess the previous owner was not really kind to his equipment…) 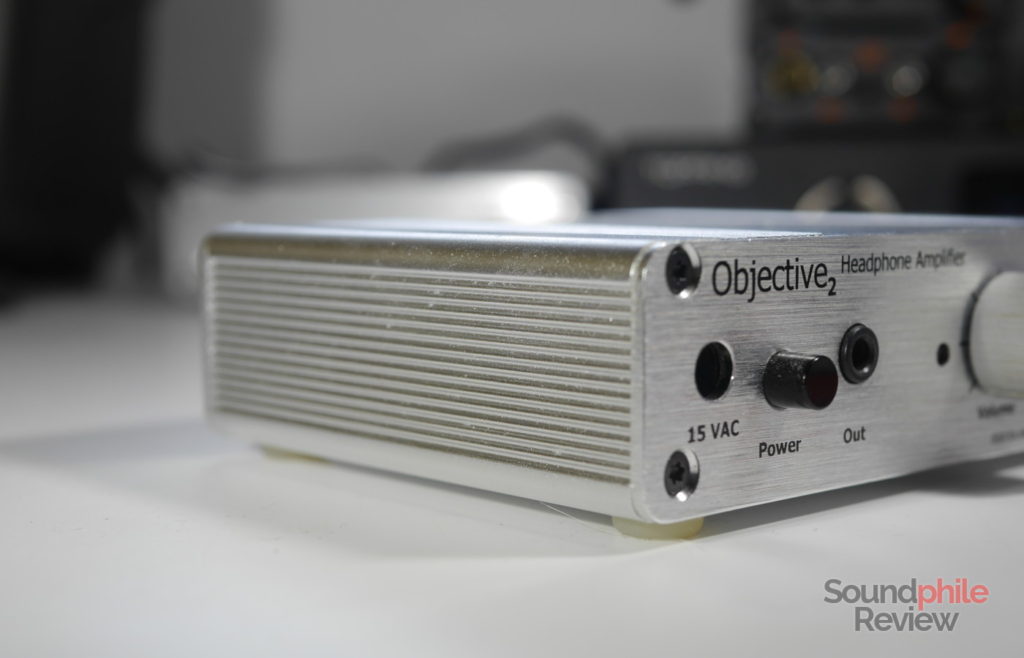 While having everything on the front may be useful, it poses a few cable management issues if you want to use the Objective2 on a desktop – you can see why if you look at the cover image. A partial solution is to add rubber feet as I did. Having the option of RCA input on the back, together with the power connector, would make it way easier to manage the device on a desk and/or stacked on a DAC. Head ‘n’ HiFi has actually an option for that, but it comes as a do-it-yourself kit that requires some soldering and removes the ability to use batteries.

The shell can be easily opened with the help of a torx screwdriver to service the internal components, such as the batteries. To access the innards one just needs to unscrew the four front screws and pull out the board. It is rather easy and requires less than a minute.

The knob, which is made of aluminium in my case, has a nice sense of weight which makes it easy to adjust volume in conjunction with its free movement. It feels smooth, solid and reliable. In terms of features, the Objective2 is rather simple – you plug in output from a source and headphones and you listen to music. That’s it. The only notable addition to this is the gain switch: by default, it is set to 2.5x when turned off and to 6.5x when turned on. It should be enough to cover the vast majority of headphones on the market.

Nwavguy is largely famous in online audiophile circles because of its effort in promoting low output impedance, backing up his claims with measurements. The Objective2 is especially good in this regard, as one can legitimately expect, with an output impedance of 0.54 Ω. With such a low impedance, there can’t be any impedance matching issues with any headphones: when taking into account the recommended ratio of 1:8 (output impedance: headphones impedance), any headphones with impedance higher than 4.32 Ω are fine. That means all headphones are!

Though the recommended maximum impedance is 250 Ω, I can vouch for the fact that the Head ‘n’ HiFi Objective2 is able to drive headphones at least up to 320 Ω (e.g. Sennheiser HD6XX, Venture Electronics Zen 2.0 Omega Edition) with enough power to blast your ears.

Talking about power, low-impedance headphones such as IEMs are too easily driven to have a reasonable volume level in my experience, so that an attenuator of some sort is necessary.

What I especially like is the potentiometer behind the volume knob: it is a little marvel as its imbalance zone is really small. The rest/zero position is at 7, and the imbalance goes away before 8 – it is really, really small. This lends the listener good control over volume even when dealing with low volume levels.

The Head ‘n’ HiFi Objective2 uses two rechargeable 9V batteries – yes, the same ones you can actually buy at any supermarket (I did just that, in fact). Those batteries afford the amplifier a long battery life, which goes beyond a full day of usage (around 10 hours). Of course, it vastly depends on your usage, which includes headphones being used, volume level and gain. If you use it with low volume as I do, it can last up to 11-12 hours.

Once the batteries reach their lower charge limit, the amplifier will just stop making any sound, even though it will still power on. I do not know if this is the desired behaviour, but I consistently experienced it and therefore consider it normal.

Since I acquired it last September, I have been using the Head ‘n’ HiFi Objective2 extensively to carry on my tests of the various headphones I tried. In order to write this review I focused on the following equipment: HiFiMAN HE-560, Sennheiser HD 6XX, RHA T20i, IMR Acoustics R1, Venture Electronics Asura 2.0s. I used a Topping D30 DAC as source, playing FLAC files (almost entirely standard-res).

The Objective2 aims to portray music as accurately as possible and this means that one should hear no differences when testing it against other solid-state amplifiers without explicit sound alterations (e.g. to mimic tubes). I usually can’t hear differences between solid-state sources without such intentional alterations: they all sound so similar it’s difficult to tell them apart as differences, if at all present, are extremely subtle and negligible. Against my expectations, that’s not entirely the case with the Objective2: bass is slightly tighter and punchier than with most other amplifiers I tried. That is completely unexpected, but I find this behaviour to be consistent with all headphones when comparing it against most other amplifiers I own (i.e. Topping DX7, Topping A30, RHA Dacamp L1…).

This is a nice surprise, as I consider this an improvement over other sources. The rest of the spectrum is otherwise largely similar to the other sources I tried, as far as I can tell – just as expected. This means it offers neutral, transparent sound and allows you to focus on the music – or, if you want to use music to listen to your equipment as Alan Parsons says, you can listen to your headphones.

What I like about the Objective2 is the fact that it is able to provide lots of power and therefore it can drive any headphone I plug in without effort; whether it is the current-hungry HE-560 or the high-impedance HD6XX, it just drives them and it does so with authority – even with those, though, I actually tend to use a device such as the iFi IEMatch because the volume is too high even on minimum setting.

Whether we take the affordable €110 price into account or not, the Head ‘n’ HiFi Objective2 offers insane value for the money. It is well built, portable, powerful and completely transparent, so it has everything one could ever ask.

The Head ‘n’ HiFi Objective2 is a great amplifier which you will find value in whether you are a novice to the audiophile world or a seasoned veteran. It can drive headphones of all impedance and sensitivity levels, and it may even be a bit too powerful for the most sensitive ones.

The only criticism I have is the lack of an option for RCA input on the back, which would make no difference on the sonic front but would make the amp a bit more convenient (an option is available, but requires some soldering). Everything else is as near to perfection as can be.