Cables usually use a number of cores determined by powers of two – two, four, eight, sixteen are the most common out there. That’s why I was surprised to see six cores on the latest cable by Yinyoo, aptly named “Yinyoo 6-core copper cable“, who made it for IEMs with either 0.75 mm 2-pin connectors or the MMCX standard.

The new cable seems to be halfway between the AK Audio 4-Core 7N copper cable and the Yinyoo 8-core SPC cable – it is surely flash in its appearance as the former, while being soft and malleable as the latter.

Disclaimer: this is a sample AK Audio provided for free. It is on sale on AK Audio’s AliExpress store at $19.98, though a discount is available for Soundphile Review readers. You can snatch it for $15 if you write “SoundphileReview” in the message field during checkout, then select “other payment methods” and confirm the order. Cancel the payment and wait for AK Audio to adjust the price (they do it manually).

Packaging is kept to a minimum: just a resealable plastic bag with a warranty leaflet inside it. My environmentalist soul is thankful for this – though a paper bag would be even better. 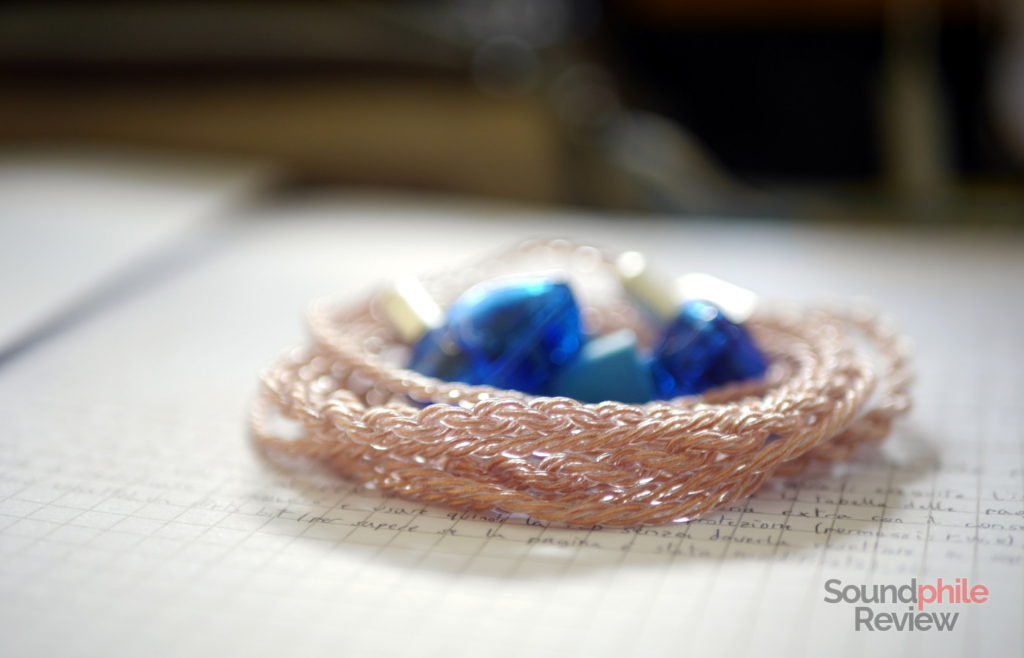 As the very name says, the Yinyoo 6-core copper cable has six cores, three per channel. Contrary to the 4-core cable made by AK Audio, in this case each core is individually coated. Below the Y-split the cable is quite thick as it is a double helix, each part of which is made of three twisted cores. Despite these two facts, the cable is soft and malleable in its entire length.

Contrary to many cables for IEMs, the Yinyoo 6-core copper cable does not have a stiffer, fixed-shape part on the upper section, where it leans on the pinnae. This makes it theoretically possible to use them with products such as the Zen Omega Edition or the IMR Acoustics R1 (though it actually does not fit correctly on the R1 due to the peculiar connector the IEMs use), as their shape is not fixed.

The plastic coat tends to blue and therefore lends a pinkish tone to the cable as it combines with the red of copper. After the few days of usage, this effect faded away a bit and became less apparent, exposing the copper red more. It also seem to be especially visible when under direct sunlight. 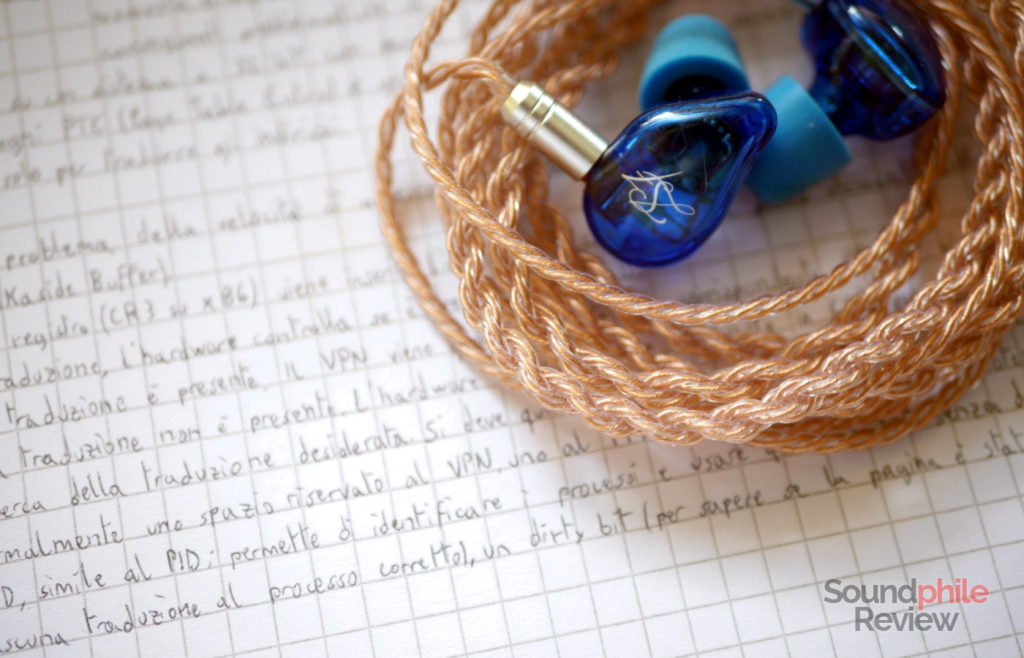 All the connectors, including the Y-split box, are made of aluminium. There is just one minor flaw, which is the lack of strain reliefs – e.g. a rubber section or a spring that prevents the cable from bending too much. Talking of bending, it is my only concern as I often ended having the cable bent while using it with the Cayin N5ii in my pocket when I am out and about. This can be easily fixed with a spring one can buy with a few cents at any hardware store, though its inclusion out-of-the-box would be nice.

Overall, my impression is that of a very decent cable, with no fatal flaws in its build quality. On the contrary, the Yinyoo 6-core copper cable appears quite good on this front and way better than many stock cables.

The chin slider is very loose and therefore slips off easily – it needs constant adjustment to stay in place, thus it looks almost useless on most occasions. As it is made out of a single piece of hard plastic, it is not possible to fasten it or adapt it either. 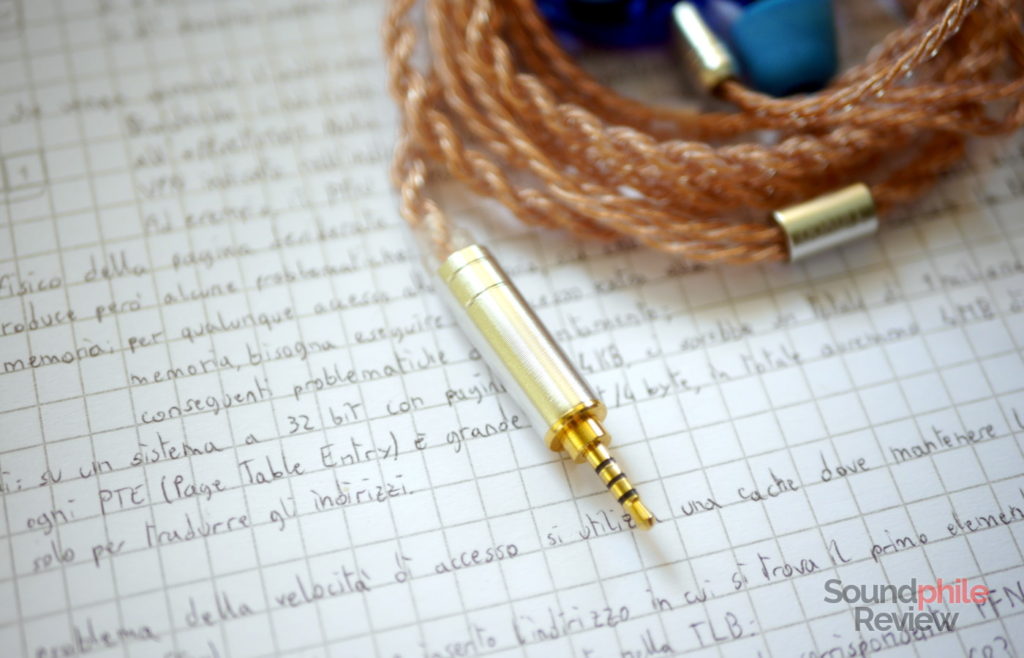 Comfort is pretty good; the lack of a pre-shaped part that sits on the ears is countered by the softness that makes the cable adapt very well to the shape of the pinnae; even wearing glasses I had no issues at all with the cable, no matter how long the listening session (I wore it for three hours without issues!).

There is almost no microphonics, and this adds to a pleasant experience overall. In this sense, this is a good upgrade over many stock cables that are just plain terrible on this front (I’m looking at you, KZ).

I usually refrain from making comments on the influence of cables on sound and I reiterate my position on the matter: I can’t hear any significant difference over other cables. Your mileage may vary, of course – I don’t claim you can’t hear differences.

All in all, the Yinyoo 6-core copper cable is totally fine. It is affordable, well built, made of good materials, aesthetically pleasing and available in a variety of different configurations. In all honesty, I can find no flaws really worth mentioning. It’s a great product all around and a great replacement for the cheap cables that are often included with IEMs. I gladly recommend it!