KZ’s intricate product line-up just got a bit more intricate with the introduction of what could be considered the company’s flagship: the KZ ZS10. The new headphones feature an all-new design, complete with plastic housings and five drivers per channel.

With the ZS10, KZ is also stepping up its game in terms of price, as they are more expensive than previous products.

Disclaimer: this is a free unit from AK Audio, who sells the headphones on their AliExpress store. If you write “SoundphileReview” in the message field of the order and select “other payment method”, the people at AK Audio will adjust the price to $34 (no microphone) / $36 (microphone). Just wait for the email confirmation before paying (it may take a while as they have to adjust it manually). 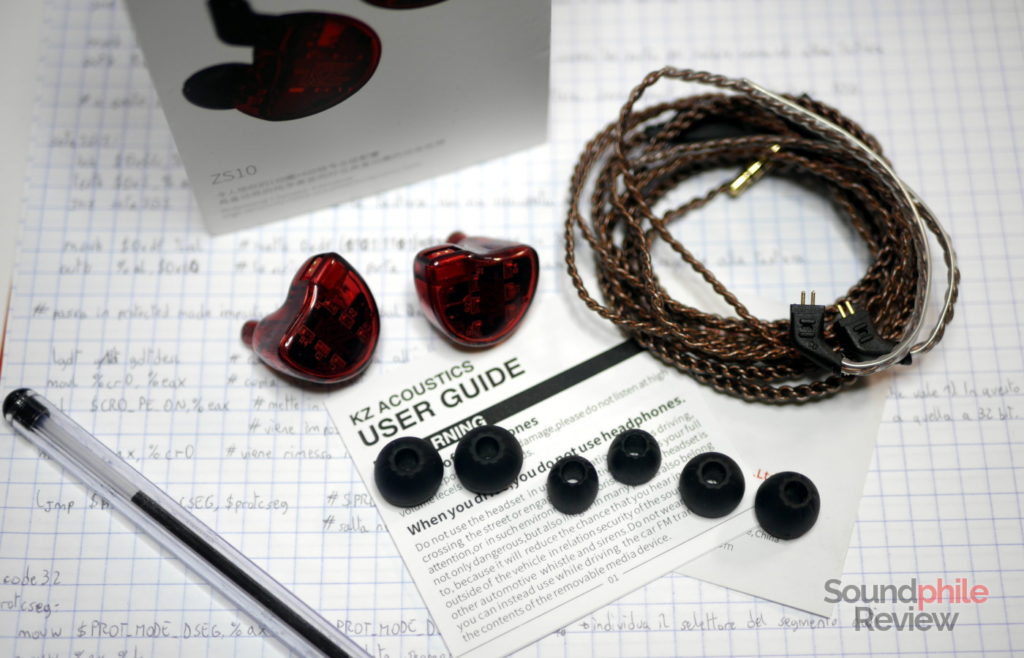 KZ does not break their tradition of only providing few accessories in their simple packaging: the only things you will find inside are, the earpieces, the cable and three pairs of silicone eartips. A small leaflet in terrible English completes the picture.

With the ZS5 and ZS6, KZ copied Campfire Audio and their housing design, period. Many people (me included) complained about this as the Chinese company capitalised on another company’s design efforts and recognisability. This time, KZ built its design from scratch and created something truly new and unique.

The transparent housings, available in three colours (black, red, green), expose the innards of the earphones and elevate them to a design element; this is especially true for the black PCB (red in the other colour variants), which also comes with the KZ logo engraved on it. The housings are rather large, but they are curved and shaped ergonomically, so they should not have the same issues as previous headphones in terms of comfort.

Build quality is good and in line with expectations for KZ products. In fact it appears the ZS10 are decently well built; the plastic seems solid and durable. I wouldn’t vouch for their survival under a tank, but they should last a few years if treated with care.

Comfort is (subjectively) much improved if we compare the ZS10 with the ZS6. Its rounded shape does not get my ear fatigued so soon and, on the contrary, proves comfortable even after more than two hours (though fatigue tends to become noticeable after that point). Of course this is all subjective and you may have a different experience, but I always found the ZS6 to be completely uncomfortable due to their edges, while the ZS10 are much easier to wear despite their larger size. It’s this larger size which may prove an obstacle for those with smaller ears, so pay attention to this.

Isolation is poor generally speaking and these aren’t meant for use in loud environments. Louder noise, such as that produced by the subway or by a motorcycle passing by, is almost not blocked at all; even people talking in a quiet room is enough to force you to raise the volume. These are not the best isolating headphones – I suggest against using them in open space offices unless you really want to blast your ears.

The cable reminds me of the silver cable the company previously sold as an add-on accessory, touting its superior audio quality; while I won’t comment on the audio quality of the cable as per my usual policy, the new bronzen cable seems indeed more resistant and reliable than the previous stock ones (and it is way more attractive, too), though it’s still small and flimsy when compared to alternatives such as the Yinyoo 8-core SPC cable or the AK Audio 4-core 7N copper cable. There’s no chin slider on the cable, nor any kind of clip to secure it to clothes; microphonics are low enough not to need any special precautions, though, so I didn’t feel the need for either accessory.

Practice often differs from theory, though, and the KZ ZS10 seem to make no exception. Yes, they are (relatively) more neutral than the ZS6, but they are still way off a properly balanced tuning with no strange dips and spikes. Their sound signature is much more “comfortable” than that of the ZS6, in that it is much less spiky and more laid back, yet it isn’t completely right. It took me quite a bit of time to understand what was going on here and I got to the conclusion that the ZS10 is just not tuned properly.

If you, like me, listen to music at low to moderate volume, then you may want to avoid these headphones. One thing I found is that unless I listened at relatively high volume (not uncomfortable, but higher than normal), the sound signature became extremely dark, to the point I could barely hear anything above 3 kHz and everything below that was dark and muddied. The situation drastically changes after a certain threshold – the sound dramatically opens up and becomes brighter and therefore more balanced.

Regardless of the volume level you choose, bass is powerful and even a bit invasive – it really strays far from neutrality and gives the sound as a whole a lot of punch and weight. It is mainly concentrated in the mid-bass region, in the area main refer to as “bloat”; in fact it is far exceeding the levels that would make it balanced and thus it sounds preponderant and even a bit aggressive. In terms of quality, though, it is not half bad – in fact it is sufficiently controlled, and by that I mean that it does not spill (too much) over the mids and it offers a glance of texture and a fair amount of nuances. Overall it is more oriented towards fun instead of accuracy and towards blasting your ears instead of gently caressing them (poetry, yay!).

Midrange is where most problems coalesce – it is both excessively bright and fatiguing and too warm. It is definitely shifted towards the upper range, in continuity with treble, and it results in an often piercing sound. Violins and guitars are aggressive and overpowered, up to the point where listening to Tom Morello’s guitar in any Rage Against the Machine recording is borderline painful. The thing is, even equalising the upper mids out, the lower mids are still in the way of neutral sound – they’re quite prominent and create a very warm base, aided in this by the bass. So we may say midrange is heavily V-shaped? On the positive side of things, though, detail is really good for headphones in this price range and transient response makes you feel drums (aided by bass, though it is a bit slower). Despite its heavy colouration, it can be pleasing in its presentation in a few tracks; of course it is not really correct and this is easily heard on many instances. It just sounds off many times, leaving you wondering why you hear things so differently.

Treble is heavily emphasised in the lower section and then heavily recessed afterwards, with a rapid decline in intensity that grants it extension close to null. I find it hard to correctly hear the cymbals in The Dave Brubeck Quartet’s Blue Rondo a la Turk – a track where they are front and centre, but instead end up being almost in the background. They’re almost screeching in the lower section, but then they turn to almost inaudible. What’s there is clear and detailed, but it is so little when compared to what should be there! On Snarky Puppy’s Flight from the incredible Sylva album I can hear less than half of what is in the upper range – a lot of detail is lost.

Soundstage has decent width and presents the instruments on a relatively wide front, aided in this by good imaging and better-than-average instrument separation. All in all, the ZS10 are technically capable and in line with KZ’s evolution in making their headphones good on the technical aspects of listening.

It’s hard to find genres ideal for these headphones (and viceversa) due to their odd sound signature – so I won’t recommend any.

Now, on to a little comparison:

I usually tend to like and commend KZ earphones because they sound really good for the asking price. They are usually heavily coloured, but that is not negative per se as it is a matter of taste (though I tend to prize signatures that tend to neutral). It becomes an issue when things don’t sound good or when the tuning prevents you to hear parts of the track – and that’s what is going on here. Treble is both piercing in the lower registers and hardly audible in the upper ones; midrange is aggressive and weird-sounding; bass is sometimes excessive and heavily relies on mid-bass.

After all this, you may then ask yourself why I rated the KZ ZS10 7/10. That’s because it is technically capable. It is not that great in terms of frequency response, but it has good instrument separation, a decently wide soundstage and discrete imaging. Without these qualities, the rating would be lower – between 5 and 5.5. But since the ZS10 do have some nice qualities in this sense, I think it is only right to give them credit where credit is due.

Update: upon further thinking, I decided to lower the rating from 7 to 6. They do not sound good enough to warrant a 7/10 rating.

I hope KZ will be able to properly tune their future headphones, as it they appear to have a big potential to really create something great, but always stop short of this goal and create good headphones for the price that are only really applauded because of their value. While that’s commendable anyway, hearing something truly great would be nice. That’s my personal opinion on the matter and I do invite you to discuss it in the comments as I do not claim to hold the ultimate truth on the matter.