KZ pushes a lot of products to the market, constantly updating their line-up with various in-ear headphones. The KZ ZSR are among the latest earphones they launched and they continue KZ’s quest of building multi-driver headphones. They feature three drivers per unit: one 10 mm dynamic driver and two balanced armatures.

As usual, the KZ ZSR are positioned in the super-affordable segment with a price that is less than $30. Their peculiar sound signature and technical ability tells a different story, though: the ZSR show that good sound must not come at high prices. Conditions apply, though.

Disclaimer: AK Audio sent me a free unit in exchange for this review. You can buy them on their AliExpress store and use the code SoundphileReview to lower the price to $24.

Note: the rating was revised on 19 November 2018 due to comparison with other products. It previously was 7.5, which I deemed excessive considering the ZSR’s faults and comparing them to other products that now populate the market. 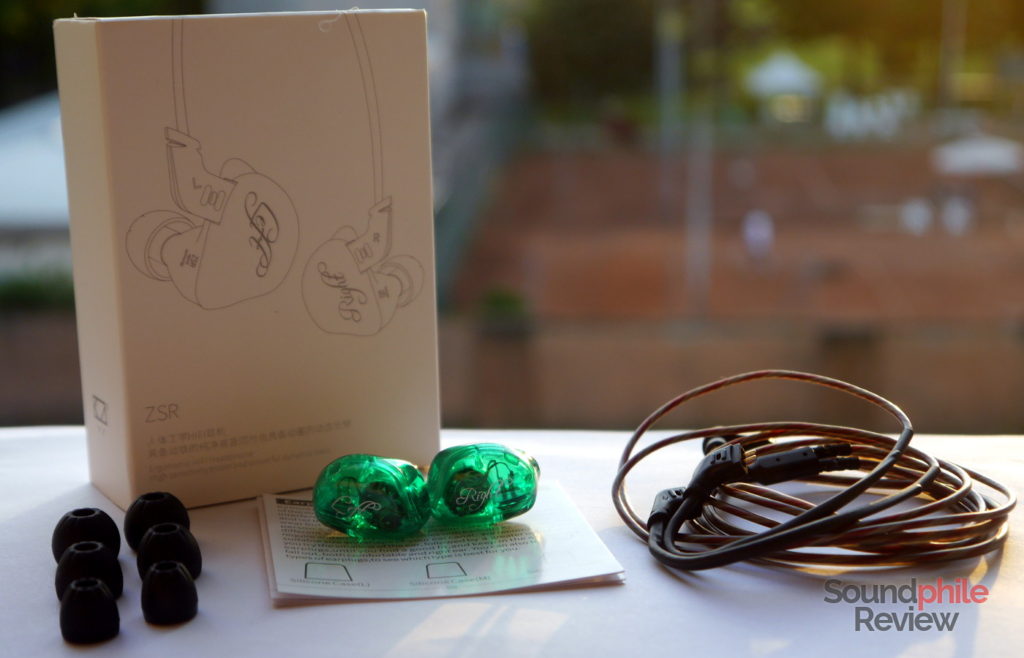 KZ only provides basic accessories in the simple cardboard box that holds the ZSR: there are three pairs of silicone eartips and a cable, either with an in-line remote or not. A silver cable option is also available, though it does not have a remote. I may say that they stay true to their budget nature.

The KZ ZSR continues KZ’s tradition of providing a colourful plastic design coupled with detachable cable and a peculiar naming scheme with no apparent meaning.

The housings can be either transparent green or black, with channel names (left/right) written in rounded, pompous cursive characters. KZ chose to write the text upside-down without any plausible reason why, so it looks right when the headphones are in the box, but wrong when one wears them – go figure.

The ZSR look built with cheap materials, but they seem a bit more robust than their looks suggest (which means: decently built, but not much more than that). Considering the price range the ZSR are in, the result is still acceptable and positive.

Although the shape is similar to that of the KZ ZS3 and follows the same approach in emulating the shape of the pinna, the larger size could make it subjectively less comfortable – I find the ZSR inferior to the ZS3 and on the same level as the TRN V10. To me they become annoying after about half an hour, as they press against the back of the pinnae. They are much more comfortable to me if I move them slightly to the front so they are not tightly fitting into the ear: this way I can wear them for a few hours without noticing they are there. 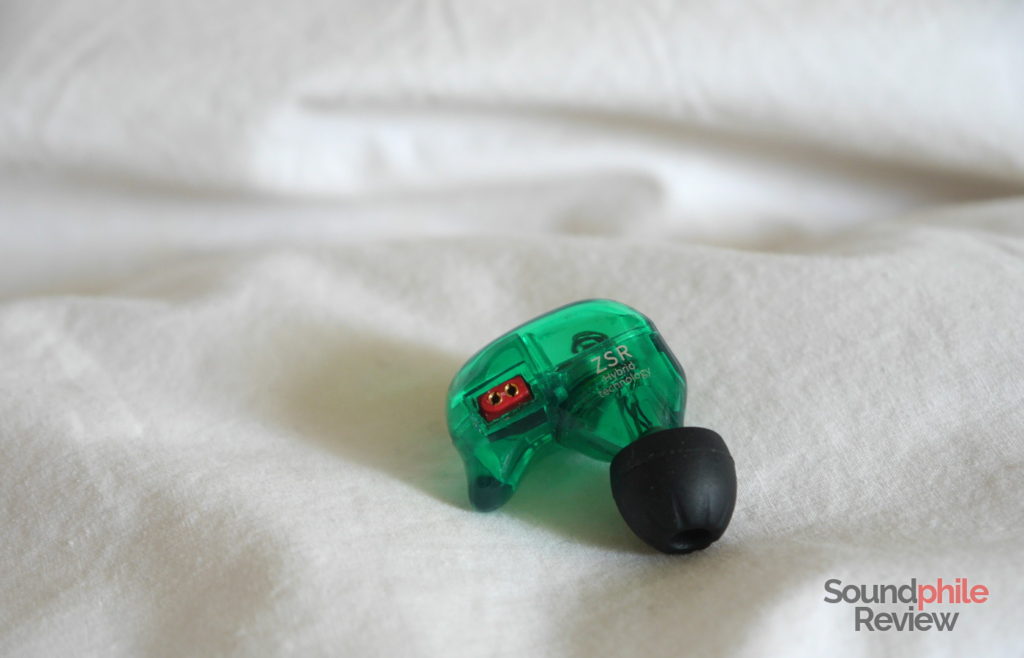 As all of the recent products by KZ, you can replace the cable with a compatible 0.75 mm 2-pin alternative. This makes it possible to use a wide variety of aftermarket cables that can better suite one’s taste. The stock one is a bit flimsy and stiff, with a good amount of microphonics, so I suggest using a replacement cable – while I do not personally support the idea that cables change sound, I support the idea that cables can produce a better experience and this is one of those cases.

When it comes to isolation, the KZ ZSR offers average protection from ambient noise and cannot shield you from the loudest sounds. It is enough to eliminate low-volume noise in relatively quiet environments such as a home or an office, but the limits emerge when testing the ZSR against public transport or other similarly noisy situations. This is true regardless of the eartips I use, even Comply foam tips which are the best at isolating in my case.

As KZ keeps on using the multi-driver hybrid approach, fitting a dynamic driver and two balanced armatures inside the housing, it also remains faithful to their house sound with emphasis on both lows and treble. The low impedance and high sensitivity of the ZSR allow you to drive it with any device you please – be it a portable player such as the Cayin N5ii, a mobile phone or a desktop amplifier.

The KZ ZSR display great clarity throughout the whole spectrum and especially in the mids, where the sound is really clean. Instrument separation is superb when considering the price, and it is very good in general: it is very easy to tell different instruments apart and to listen to them individually, however complex the track is.

The soundstage is decently wide and has a hint of depth, too, which adds an immersion not that common in affordable closed-back IEMs. This adds to a good imaging ability, which has acceptable precision and makes it possible to locate instruments quite easily in the soundstage.

There’s more bass than what should be considered “neutral”, with an emphasis on mid-bass and little sub-bass (which only gets down to 40 Hz, with 50 Hz really being where the curve starts its downward turn). Though abundant and emphasised, bass is not bloated or excessive: it never overpowers the mids and never has that murky and muddy character that so often leads poorly executed bass to be annoying. On the contrary, I find decently rapid decay and speed here, which make bass pleasant and fulfilling. There’s also some good texturing with a good amount of detail. It’s musical as in contrast to accurate – what I mean is, it sounds good though it’s not too faithful to the original.

What surprised me here are the mids: yes, they’re recessed, but they are clearly audible and – more importantly – finely crafted. They’re clear and well defined; they display a good amount of detail and, thanks to their fast response, they are quite energetic. The general tone is on the bright side, which makes brass/wind instruments especially vivacious. This does not mean that there’s no presence in the lower mids; on the contrary, male voices do have body and presence. What surprised me is how natural and organic midrange sounds to me; though it is not as natural and neutral as other headphones I’ve heard, it is surprising how much involvement and immersion it can provide. I could listen to it for hours without ever feeling fatigued.

There is a lot of sibilance in the lower treble, around the 3 kHz mark, which makes it fatiguing to listen to the ZSR for prolonged periods of time if one does not like brightly tuned headphones. As treble comes out as prominent, those two facts lead to sound being a bit sharp at times, when a lot of cymbals or other high-pitched instruments play. As treble itself is really forward in the mix, the result sometimes is that of a “treble cannon” that can be annoying. The highs are actually entirely not bad in terms of quality, though not super-extended; the detail is above average for the price range and adds sparkle to the sound, but there’s clearly not much balance here.

It’s not easy to point to ideal genres for the ZSR; their sound signature makes me believe they can work best with modern genres (e.g. electronica, hip-hop), but I also found them to be pleasant with classical and jazz. This is one of those cases where I can’t really make recommendations based on genres alone.

As for the routine question – “how does it compare to…?” – the answers are below:

At less than $30, the KZ ZSR offer lots of value. Its quirky sound signature is indeed far from neutrality and balance, but it mostly sounds good if you can tolerate a bit more treble than usual. The ZSR is perfectly in line with KZ’s usual V-shaped signature, though it takes a different approach to it by placing emphasis on the lower treble.

All in all it’s good indeed for its asking price, and maybe even a bit more. Though not strictly hi-fi, the KZ ZSR does not sound like a cheap throwaway IEM and can be a nice addition to a collection needing some fun or to start a new journey in audio. I really find it a convincing budget IEM with good character and technical abilities that make it more interesting than its looks or price would suggest.