The AK Audio 4-Core 7N copper cable joins the ranks of the ever-growing market for custom cables and is designed to be used with in-ear headphones. Custom cables for headphones and speakers are nothing new. The debate over whether they have an influence on sound is one of the oldest in the audiophile world and there seems to be no definitive answer. Measurements do not highlight any significant differences between cables, but there are multiple people claiming they can hear different details and nuances when changing cables. Whether or not cables influence sound, there are sure changes in aesthetics, comfort (for over-ear cables meant for IEMs) and microphonics.

These are the things I will focus on in this review. My personal thought is these are the most important features of a custom cable, as the impressions on sound are way too subject to personal opinion and bias – though I will do my best to highlight any differences.

Disclaimer: AK Audio kindly provided me with a complimentary unit of the cable. They sell it for $34.90 on their AliExpress store. You can buy it for $26 using the code SoundphileReview. To use it, write it in the message box during checkout, then select “other method of payment” and wait for them to adjust the price. You will receive an email as soon as the process is complete (you can close the tab and pay later).

The cable comes in a simple plastic bag without any further accessories or manuals but the warranty card. Let’s keep it simple! 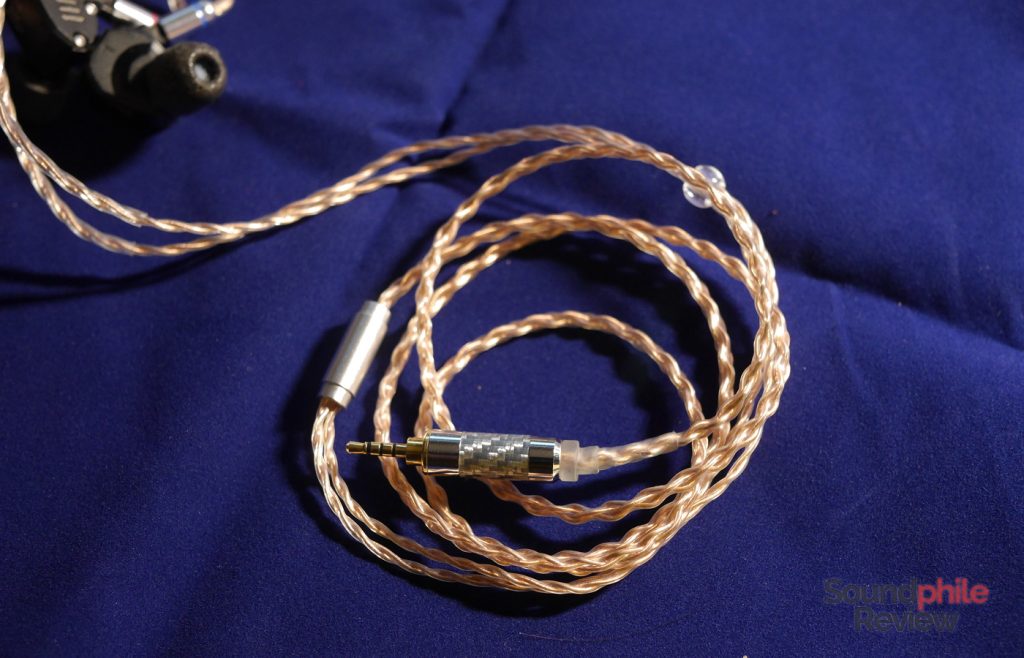 Contrary to most stock cables, the AK Audio 4-core 7N copper cable comes with a transparent plastic sleeve that exposes the copper and shows the twist of the four cores. It’s purely for aesthetics, but as we say in Italy anche l’occhio vuole la sua parte (“look is important, too” – literally “the eye wants its share, too”). All the joints – the Y-split, the jack, the 2-pin connectors – are made out of chromed metal (steel?), with the jack connector having an elaborate decoration that adds another great aesthetic touch.

The plastic sleeve is stiff enough and it adds to the cable’s own stiffness, mainly caused by the twist of the cores. The cable is solid and, judging by the looks of it, durable and resistant. Since it’s thick enough, it does not look like it can easily break as KZ’s silver cables do (as they are rather flimsy). 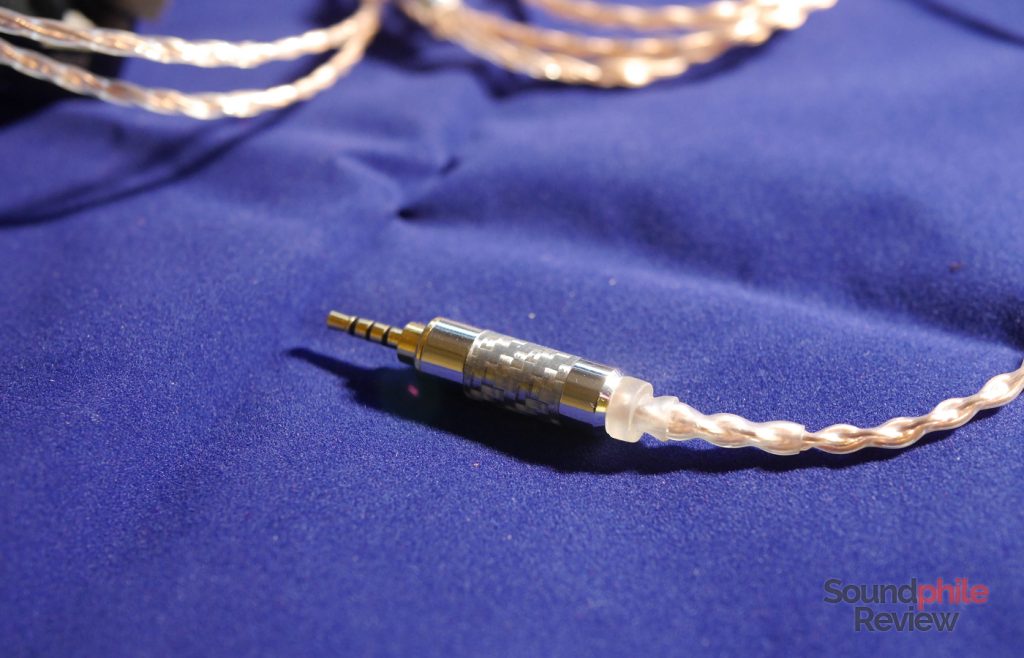 The AK Audio 4-core 7N copper cable is specifically designed to be used with in-ear headphones: it has an additional plastic cover in the last 10 cm before the earphone connection. This section is therefore stiffer and it is shaped so the cable is worn around the ear.

In terms of comfort, I find it very comfortable due to its shape and the fact it is big enough not to end up between my pinna and the legs of my prescription glasses. In fact it made the KZ ZS6 much easier to wear for longer periods.

Despite being stiff, the cable has very little microphonics, up to the point there is virtually none. In fact I could wear it on top of my jacket, leaving it dangling and hitting me continuously, without hearing any noise. That bit surprised me, given how stiff cables are usually very microphonic, but it was a nice surprise indeed.

There’s also a chin slider, made from a sphere of transparent plastic. While it’s useful, it often won’t stay in place and fall down – not a big issue, but it somehow defeats the point of having one.

I tested the AK Audio 4-core 7N copper cable using the KZ ZS6 and KZ ZS3. Sources used were the Aune M1s and a FiiO X3 III (through balanced output), plus a Topping DX7, an iFi micro-iCAN SE (fed by the DX7) and a Head ‘n’ HiFi Objective2 using an adapter to single-ended 3.5 mm jack.

If there are any changes in sound, they are pretty much indiscernible when comparing the cable to the stock one that comes with the KZ ZS6. I can’t hear any significant changes in any aspect and the sound appears to be the same. My opinion is that you should refrain from buying the cable in search of sound changes, because you would be hard-pressed to find any. Although you may actually hear them with especially sensitive headphones (I read the Campfire Audio Andromeda is extremely sensitive to cables and there should be measurements to back up the claims), most headphones won’t be able to make you hear any differences.

Leaving the sound controversy aside, I think using the AK Audio 4-core 7N copper cable may be worth it if only because of its build quality and comfort. Even if you don’t believe in the sound influence of cables (totally legit!), the upgrade in comfort and (probably) durability is sizable when compared to stock cables such as those from KZ. The low microphonicity is also a big plus that makes using it on the move not only good, but pleasant.

Now, the AK Audio 4-core 7N copper cable is good, but is it $35 good? To me the answer is “yes”, though it really depends on how much you value comfort and build quality. I think the price is just right, given that it seems like it could last for years and that it offers such a valuable difference to most stock cables included with earphones.