Linsoul’s very own foray into the headphone market, ThieAudio has been launching new products for a while now – starting with the full-size planars Phantom and now continuing with in-ear headphones. A line-up that seems to have some common features, namely the relaxed and “safe” signature. This approach was used in tuning the ThieAudio Voyager 3, their entry-level earphones in the Voyager line, as well.

Disclaimer: this unit comes courtesy of Linsoul, who sent it to me for free. The earphones retail for $159. 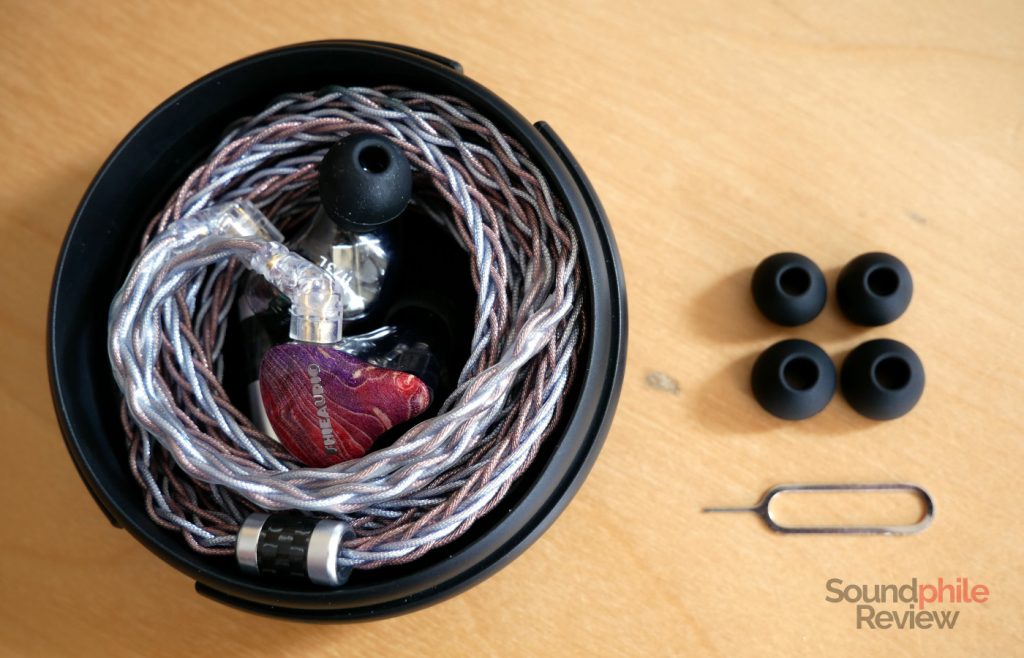 The ThieAudio Voyager 3 came in their metal case (one similar to the TRN-labeled one in my best earphone cases article) and that included a tool like those you use to remove SIM cards from phones, as well as a set of three silicone tips. The SIM removal tool is actually there so that you can use the switches on the shells, as they’re too small even for the tip of a pen. 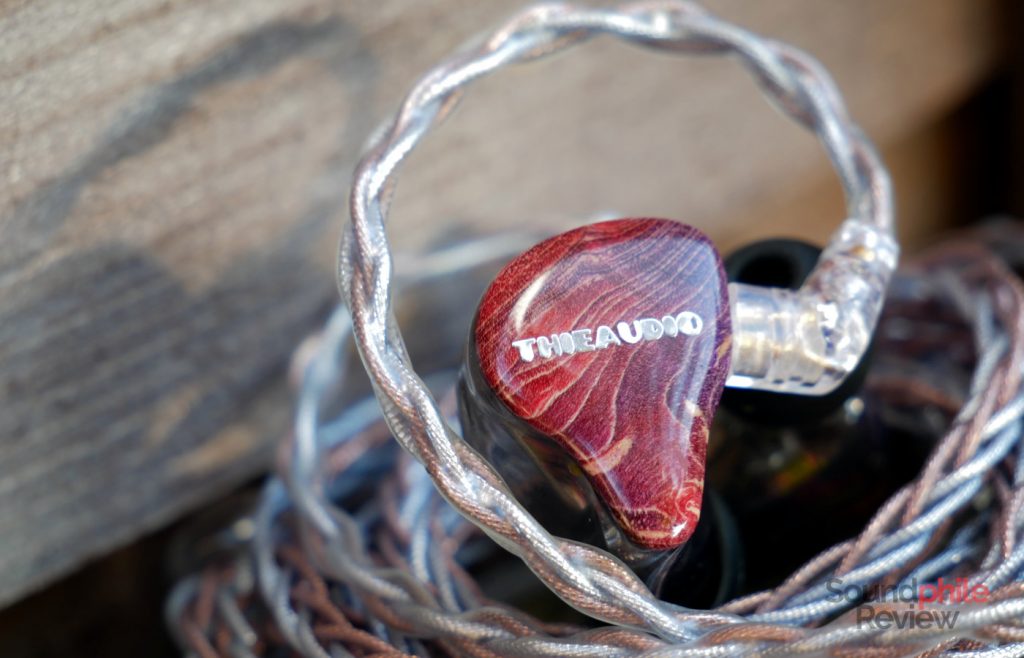 The ThieAudio Voyager 3 is not really original when it comes to design: the shape is the usual one most IEMs use these days – they are similar to the Peacock Audio P1, BGVP DH3, CCA C10 and many others. The novelty is in the colours: the shell itself is transparent, showing the internal components with great clarity, while the faceplate is wood-like in pattern. In my case it is reddish in colour with some purple added in and the ThieAudio logo in silver. 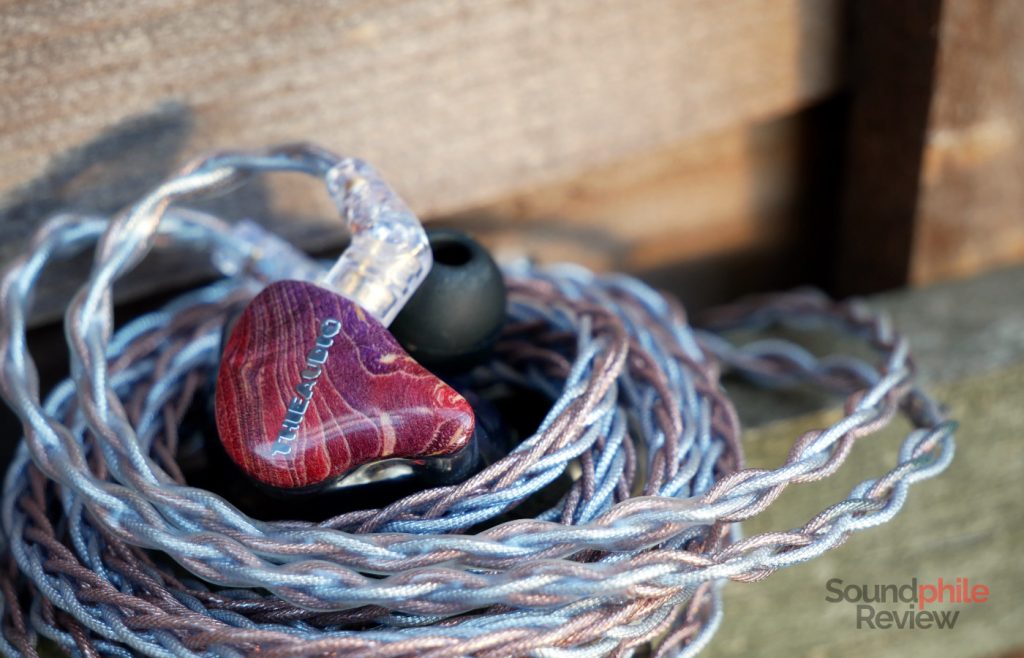 Build quality appears to be quite good, without any apparent flaw in how the earphones are built. The plastic appears solid and the assembly is done well.

The comfort is quite good, in no small part thanks to the fact that this shell shape has now been widely tested with hundreds of models that share it. It’s not original, but it works quite well! 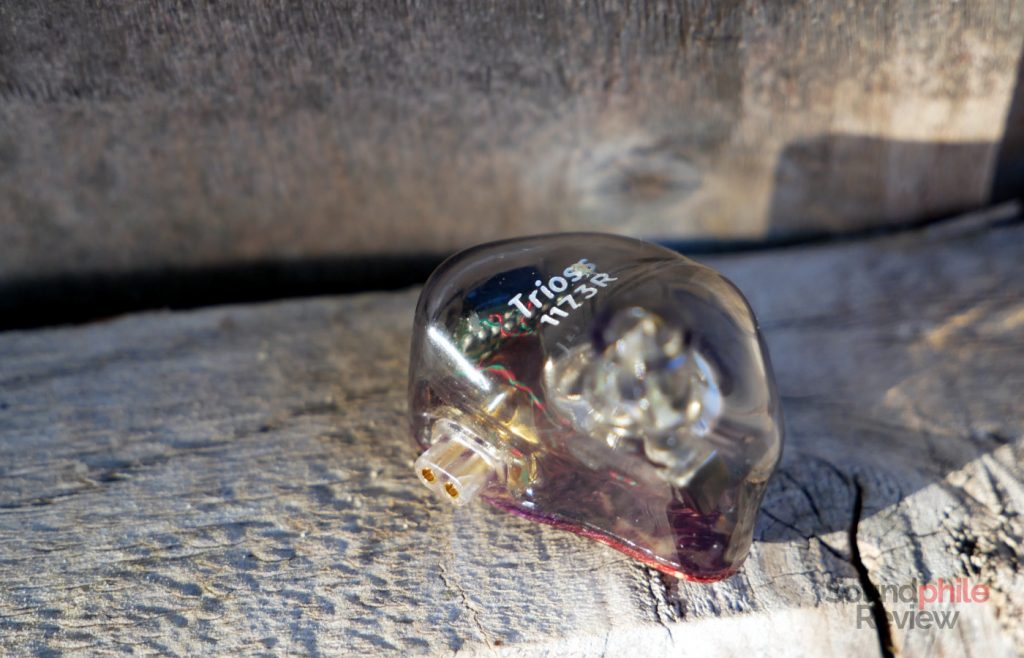 Isolation is decent: you can still hear the surroundings, but sounds coming from outside are reduced in volume by a moderate amount. In other words, I find that the Voyager 3 are ineffective when it comes to shielding from loud noise (say, a train or an especially loud housemate), but they work well with moderate-intensity noises. 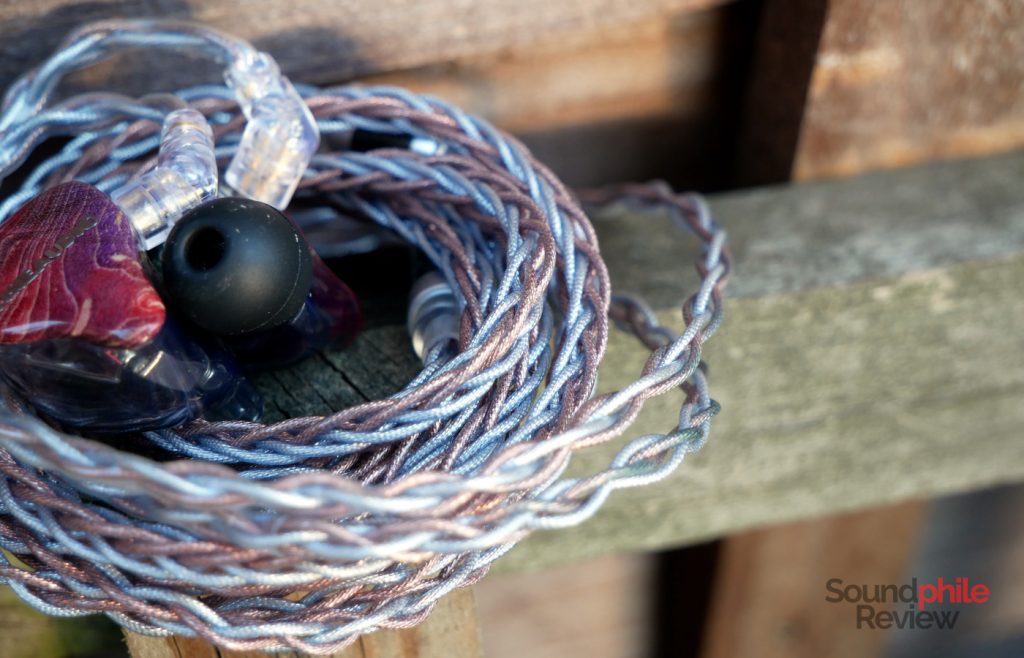 The cable is similar in appearance to that bundled with the BGVP DM7: it has the same silver and copper colours and the feeling is actually similar, too. It’s soft and malleable, and even a bit heavy overall, but enjoyable. It also has little microphonics, so I could use it while walking around without issues.

I tested the ThieAudio Voyager 3 using a Burson Audio Playmate, a FiiO BTR3K and a Shanling M2X. They all reproduced the same files, mostly comprised of FLACs in 16 bit / 44.1 kHz.

As it often happens, the number in the name refers to the amount of drivers available. The ThieAudio Voyager 3 therefore have three drivers, all of which are balanced armatures: two Knowles CI-22955 for bass and midrange and one Knowles ED-29869 for treble. The three armatures focus on different areas of the sound thanks to a  crossover network: one 22955 produces bass, while the other focuses on midrange; the 29869 armature is used for treble. The low impedance and high sensitivity of the Voyager 3 mean you will be able to drive them with any device, including phones and computers, but it also means the earphones will pick up any noise.

The ThieAudio Voyager 3 opt for a “safe” U-shaped signature which emphasises mid-bass and lower treble. This is a signature that works well with most music out there as the emphasis is limited and adds some colour without distorting the sound.

Bass has a larger-than-neutral appearance, with a larger presence in the mid-bass area than in the sub-bass area. ThieAudio opted for a bass presence that exceeds that of a theoretical neutral tuning, but did not went too far with that: bass has just a light emphasis, which gives it some additional weight in the signature and adds some colour without making it overbearing. Despite using only balanced armatures, the Voyager 3 do have some physicality to their sound. In tracks such as Hagal by Wardruna you can clearly hear the drum’s beat: it’s fast and immediate as one would expect from balanced armatures, but it also has a bit of physicality – each hit on the skin is felt on a physical level. Detail is good, as is layering, but the Voyager 3 lack the finest details and technicalities – something to be expected considering they use a single balanced armature for bass.

Midrange can be described as mostly “safe”, with a relatively neutral tuning that privileges the upper-middle part. You can hear that the mid area has a bump when listening to tracks such as Wardruna’s Ár var alda: the male voices appear like their upper component is emphasised, so they’re a bit more sibilant than they should. Luckily they don’t lack any body, though, as they have enough presence in the lower part to sound full and “proper”. There is, however, this emphasis which makes high-pitched instruments (electric guitars, female vocals, violins, etc) stand out more. From a technical standpoint, midrange is reasonably good: the level of detail is commendable for earphones in the sub-$160 bracket, as is speed (thanks to the use of balanced armatures).

Treble is decently detailed and extended. If you are looking for super-extended or super-detailed treble, the Voyager 3 will not suit your needs, but they’re otherwise pretty good considering the price range they’re in. In fact they offer a good amount of detail that makes cymbals, crashes and similar instruments really pop out, helped in this by the modest emphasis that characterises treble. There is more emphasis on the lower area, then it goes down slightly with the middle area and plunges in the upper part. I would not describe the Voyager 3 as being especially airy or open-sounding, but they have those qualities in a moderate fashion and that helps them sound clean and clear enough.

The description you just read is that of the earphones in the “12” configuration, which is with both switches on the “active” (or “on”) position. I consider this the best-sounding signature of the Voyager 3. Here’s a comparison of the different switch configurations (with “1” and “2” indicating that the respective switches are set to “on”):

So let’s compare the ThieAudio Voyager 3 to similarly-priced alternatives:

The ThieAudio Voyager 3 surprised me with their pleasant tuning, good technical ability and good comfort. They’re quite interesting for those who want their music to be more coloured and lively – they’re surely more fun than neutral-sounding earphones. I like the fact that ThieAudio went with the tuning switches in all of their earphones: this allows one to customise the sound to their preference, even if the choices are not many – but I do see value in being able to have a brighter, more sparkling signature and a darker, more bass-focused signature.

Overall, the ThieAudio Voyager 3 are quite a good offering, one that gets almost everything right. They’re not perfect, but they’re definitely more than decent. That’s quite a good thing in my book, as not every earphone has to be revolutionary and disrupting. Sometimes you just want to enjoy what you are listening to and the Voyager 3 allow you to do that.